Read The Girl with the Creel Online

The Girl with the Creel 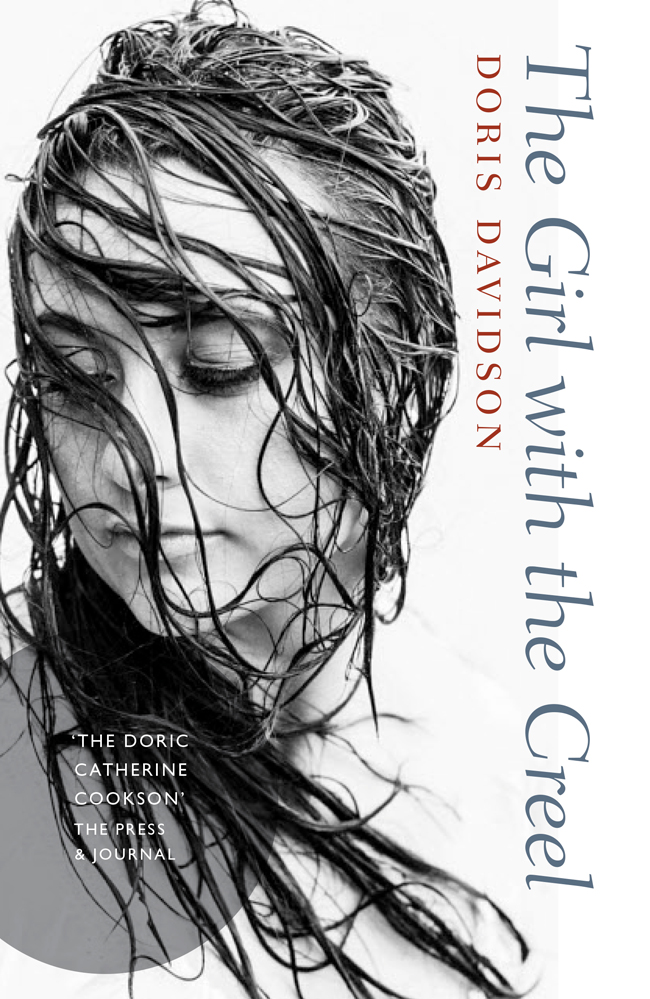 The Girl with the Creel

All rights reserved. No part of this publication may be reproduced, stored or transmitted in any form without the express written permission of the publisher.

For Isabel Harrison whose enthusiasm for the heritage of her home town inspired me to write this novel, with gratitude for the help she gave, especially for correcting me on various points.

Doreen, who, as usual, read through my manuscript for typing and other errors. Sheila, Debra, Alan and Carol, for letting me bounce ideas off them, and for giving me some suggestions.

Isabel (again), Hugh and Margaret, for the help given me in the Buckie Heritage Cottage, which is run voluntarily.

All concerned in the
Buckie Drifter
, run by the Fishing Heritage Society.

Bertha and Bill, for taking Jimmy and me up the coast road, for going down into Pennan (home of âLocal Hero') and Gardenstown, and for finding the Heritage Cottage once we reached Buckie.

Jimmy himself, for driving me back there more than once.

Lillias and Ted, for telling us about the Heritage Cottage in the first place.

Last but by no means least, the lady (I very much regret not asking her name, but she lives in No. 19 the Yardie) who was hanging out clothes on the sea front when I asked if she could spare me a few minutes. Born and brought up in the Yardie (although not in No. 19), she and her husband spent a full twenty minutes with us, and she gave me a good description of life there in the thirties.

Apologies to the good folk of Buckie for not using their dialect in my novel.

Excitement pounded through Lizann Jappy as she took her new dress out of the cupboard. It was absolutely beautiful, the ribbons slotted through the holes at the neck in a slightly darker shade of pink, and a dainty pearl button to fasten it at the back. The tiny sleeves just capped her shoulders, and although it wasn't fitted at the waist, the sash would pull it in to any size. Her father had never allowed her to go dancing before, and he had only agreed, after much pleading, on condition that her brother looked after her and saw her home. At sixteen and a half she didn't fancy being chaperoned, and, slipping the taffeta creation over her head, she hoped that Mick would be too involved with his own affairs to watch what she was doing. She intended to dance with as many different boys as she possibly could; she was determined that she would find romance tonight!

Smoothing the ends of the sash over her right hip, she went downstairs slowly and came to a halt in the doorway of the kitchen. She had planned to make a grand entrance, but the other three members of her family were in a huddle over the fire and were totally unaware of her. Waiting to be noticed, she studied them critically. People often told her that she took after her mother and she could see it for herself now. They both had fair skins â surprising with such black hair and dark brown eyes â were small-boned and quite short. The only difference was that her mother bordered on the delicate, whereas she was wiry and had hardly had a day's illness in her life.

Lizann compared the two men now. Mick, at twenty-one, bore a striking resemblance to their father, with bushy eyebrows and light brown hair that waved at the front. They, too, had brown eyes, but their years at sea had made their complexions ruddy and weatherbeaten, and, at just under six feet, their height camouflaged their breadth.

As if sensing her scrutiny, Willie Alec turned round. His admiring gasp let her know that the effort she had put into making herself look her best had been worth every minute, and Mick looked thunderstruck at her improved appearance. Her mother, who had bought her the dress last week in McKay's, was smiling at their reactions and nodding her head.

Recovering from his astonishment, Willie Alec spoke first. âYou'll draw lads to you like a magnet looking like that, lass. You see now, Mick? You'll have to make sure she doesn't come to any ill.'

Mick had been objecting to being told to look after his young sister, but he could understand his father's concern for her now. She was bound to be swamped with partners, and she was too young to know how to sort the chaff from the grain. She could easily be led astray by some sweet-talking rogue. âI'll watch her like a hawk,' he promised.

The Jappys lived in a fishing hamlet called the Yardie, consisting of sixty-five variously-sized cottages tightly packed into an unbelievably small area. Perched on the Moray Firth, it was made up of a rectangle of dwellings with several tiny, pavement-edged closes (not wide enough to be called streets), each holding perhaps five or six domiciles, filling the interior. The main road north â to Elgin and Inverness â ran close past one of the long sides of the oblong, but it was quite obvious that the houses facing it had been there first. The opposite side ran parallel with the sea, facing what had once been a small harbour but which had silted up so often that it had fallen out of use and been dismantled.

A stranger chancing on the Yardie and interested enough to investigate beyond its faÃ§ade would be forgiven for thinking, probably correctly, that the original inhabitants, those who had built their homes by the grey North Sea over a century ago, had wanted to keep completely apart from the communities on either side of them and had thus packed as many houses as possible on to their piece of land. Being men who earned their living from the sea, whose whole lives were bound by the sea, they had made no provision for gardens, only minuscule backyards where nets could be spread out to dry. Sadly for those who followed on, the Yardie had eventually been swallowed by the expanding port of Buckie â although it still seemed to present an aura, an identity, of its own.

As soon as they left their house, one of those bordering the road, Lizann said indignantly, âYou don't have to look after me, Mick, I'm not a bairn now.'

âYou don't know anything about lads.'

âAnd I'll never get a chance to learn if you keep spying on me,' she declared hotly.

They walked the rest of the way without speaking â Lizann hoping he wouldn't spoil her evening, and Mick wondering if Jenny Cowie would let him see her home when they'd have his sister with them. After delivering Lizann, of course, he and Jenny would be alone, but her house was hardly any distance along from his.

When they arrived at the Town Hall, Mick waited for Lizann to come out of the cloakroom, and was surprised when Peter Tait, his closest friend, showed up. Like Jenny, Peter lived in Main Street, Buckpool, originally another village in its own right but, practically rubbing shoulders with the Yardie, now integrated as the most westerly part of Buckie. He and Mick had been in the same class right through school, and Peter had been as often in the Jappys' house as in his own until Mick started working seven years before â he was engineer on the
Silver Star
, the drifter on which his father was mate. Peter had carried on his education in order to become an apprentice draughtsman in Jones's shipyard, but he still popped into the Yardie at least once every time Mick was ashore.

âI didn't expect to see you here,' Mick smiled. âI thought you weren't all that keen on dancing.'

Peter pulled a face. âNeither I am, but I went to ask if you'd come out for a walk, and your mother told me you were here.'

âI'd to take Lizann with me, worse luck.' It occurred to Mick that his friend could share his burden. âPeter, I don't want to tie you down,' he said, hopefully, âbut â¦ um â¦ would you mind giving her a dance or two?'

Lizann appearing at that moment, Peter's expression changed to stunned amazement at the butterfly which had emerged from the chrysalis. âI'll leave you to it,' Mick grinned, and made a beeline for Jenny Cowie, the slender, chestnut-haired girl he had fancied for quite a while.

For the next twenty minutes or so, he did take a few looks to check on his sister, but when he saw that she was still being partnered by Peter, he relaxed to enjoy himself.

Proudly displaying the steps Mick had taught her over the past week, Lizann wondered why Peter didn't dance with any other girls, and then guessed that he was too shy. He'd always treated her like a sister, so he would feel as easy with her as she felt with him, but she wished he'd give some of the other boys a chance to take her up.

Peter stood awkwardly beside her during the interval, and she hoped that he would look for another partner for the second half, yet she was quite glad when he led her on to the floor as the band struck up again. The waltz had scarcely begun when he murmured, âI hope you don't think I'm being too personal, Lizann, but that dress makes your cheeks pinker, and your mouth â¦' He stopped, colour suffusing his face, and swallowed before he went on, diffidently, âYour lips are like cherries.'

âIt's lipstick,' she laughed, âand if my mother knew I'd bought some, she'd have a fit. I put it on in the cloakroom.'

âIt suits you. You're â¦ very pretty tonight. I never noticed before.'

Something in his hazel eyes made her heart flutter, and when he added, âYou're the prettiest girl here,' she didn't know what to say. She was seeing him in a different light, too, and instead of the old familiar Peter, it was a tall, handsome, blond stranger who was holding her in his arms.

For the next hour, they were acutely conscious of each other, and she felt confused each time their eyes met. His hold was firmer than it had been earlier, as if he were afraid she would turn and run, which was the last thing she would have done. She didn't know what was happening to her, but whatever it was, it felt good.

âIf â¦ you want,' she whispered, doubting if her quivering legs would carry her that far.

His grip on her tightened even more. âThere's always a mad rush at the end, so we'd best go now, before the last dance starts.'

âGo and get your coat. I'll tell him.'

In the empty cloakroom, she looked at herself in the mirror above the wash-hand basin. She had brushed her short springy hair so many times when she was getting ready that it seemed as though her face was framed by dozens of shiny black bubbles, and her dark eyes sparkled above her flushed cheeks. Her lipstick had worn off, but her lips weren't as pale as they usually were. She did look different, not pretty exactly, but certainly more attractive. Was it only the effect of the new dress, or was it because Peter had paid her those compliments? Surely it wasn't just being with him? She felt timid now at the thought of him taking her home. What if he tried to kiss her? After considering this, she decided that it might be quite nice â¦ but he likely wouldn't.

When she went into the passage again, Peter was waiting for her. âMick says it's fine by him.'