Read The Girls in Blue Online

The Girls in Blue 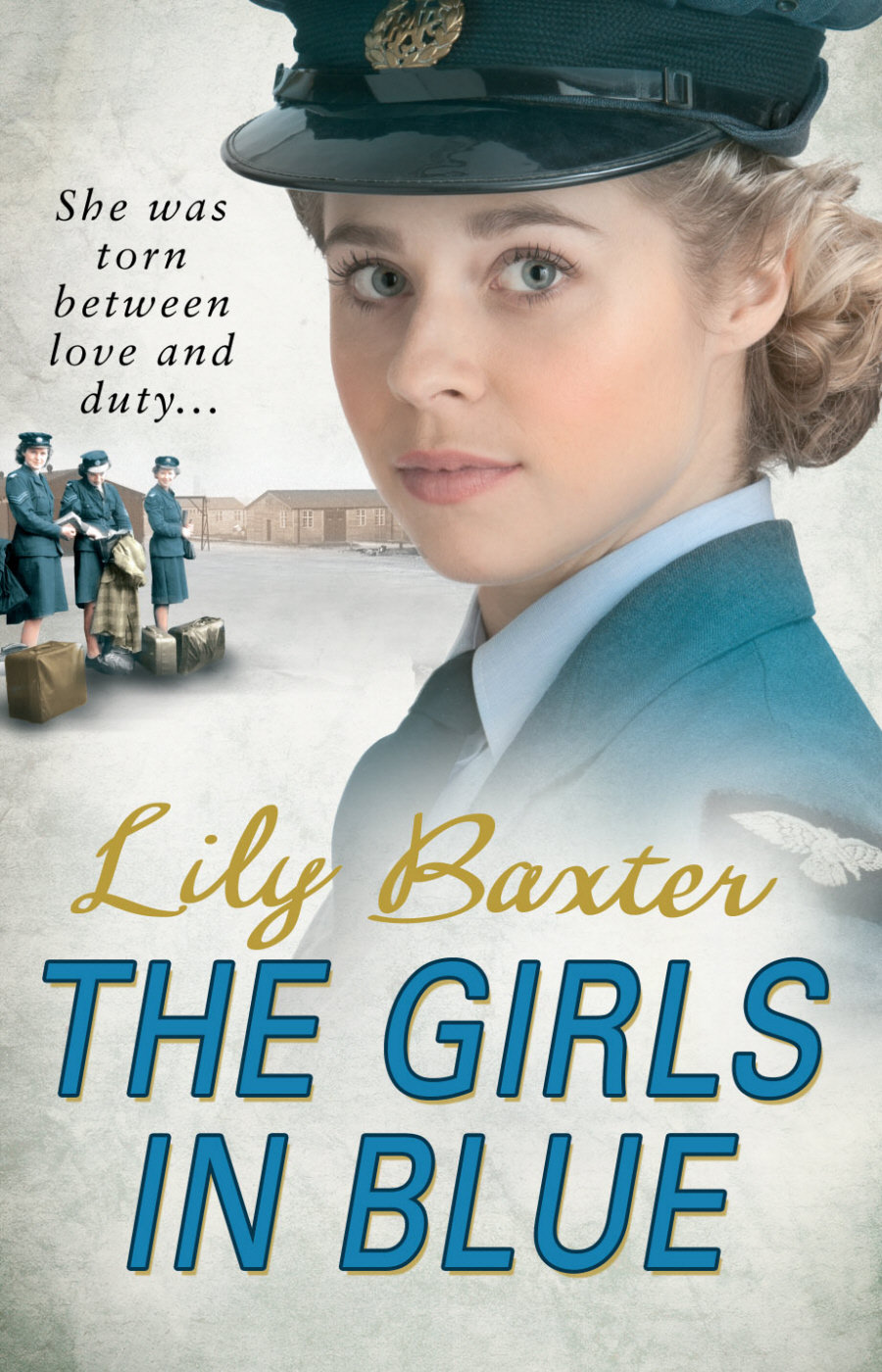 When her home is destroyed in a bombing raid over London, Miranda Beddoes is forced to take refuge with her grandparents down on the Dorset coast. With both her parents doing their duty for king and country, Miranda longs to do the same. She joins the WAAF and is soon working hard to help win the war.

Despite her determination to dedicate herself to her work, Miranda falls for charismatic fighter pilot Gil Maddern – a man known for his recklessness and passion for flying. As the battle rages in the skies above them and she learns that Gil’s plane has been hit, it is only the friendship of her fellow girls in blue that keeps Miranda going as she waits for news …

Lily Baxter lives in Dorset. She is the author of
Poppy’s War, We’ll Meet Again
and
Spitfire Girl
. She also writes under the name of Dilly Court. 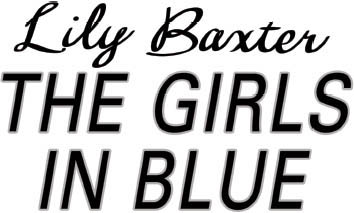 For Janet and John

THE AIR RAID
siren wailed its terrifying warning, shattering the peace of what had been a glorious summer day in the leafy east London suburb. Miranda had been making her way home from secretarial college and had just reached the spot on the common where a lone tree, reputedly killed by a lightning strike years ago, pointed its stark branches at the cloudless sky. She came to a sudden halt, wondering if this was yet another false alarm, but the drone of an approaching aircraft engine made her look up. Shielding her eyes from the sunlight she spotted a single plane, flying low and seeming to skim the rooftops in the street where she lived. At first she thought it must be an RAF plane returning to one of the nearby airfields, but then a reverberating boom made the ground shake beneath her feet and clouds of dust and smoke billowed into the air. The thunderous noise went on and on, ricocheting off the tall elms and oaks that separated the rows of detached houses from the common land, and having done its worst the
enemy
aircraft soared upwards and away to the east.

Miranda watched it with a feeling of unreality. This must be a nightmare: at any moment now she would wake up and find her mother shaking her and telling her to get up or she would be late and miss her bus to college. But gradually the ground stopped moving and the sound of falling masonry ceased, leaving the world around her deathly quiet. Even the birds had stopped singing. Then the breathless silence was broken and she could hear people shouting and screaming for help. She broke into a run, teetering on her high heels as she raced across the tussocky grass to the footpath that led through the thicket of hawthorn bushes to Linden Avenue and home.

Nothing could have prepared her for the sight that met her eyes as she emerged from the cool shade into the heat and choking brick dust. Several houses had been completely demolished by the German bombs and those left standing were badly damaged. Her hand flew to her mouth, stifling a cry of horror as she realised that her home had not been spared. Moving like a sleepwalker, she threaded her way through the crowds of shocked neighbours who had emerged from their Anderson shelters to inspect the damage. The all clear rang out, but it was hardly a joyous sound.

‘Don’t go in there, love.’ Mr Walker, one of the local ARP wardens, grabbed her by the arm as she
was
about to open the garden gate. ‘The roof’s gone and the whole lot might come down at any minute.’

Miranda stared at him dazedly. ‘But it’s where I live.’

He patted her on the shoulder. ‘Not now, it ain’t, ducks.’ He frowned. ‘Was anyone at home?’

‘No. My father is in the army and Maman works in London.’

‘So she does,’ he said with a knowing smile. ‘The missis told me about her. French lady, ain’t she? Works as a secretary in the War Office.’

‘That’s right, and I must go indoors and telephone her. I need to tell her what’s happened. It’s too awful for words.’

Sucking in air through clenched teeth, he shook his head. ‘My orders are clear, miss. I have to direct you to an emergency shelter where the ladies of the WVS will look after you. A nice hot cuppa will make you feel better. You’ve had a nasty shock.’ He took her by the shoulders and spun her round to face a middle-aged woman wearing a WVS uniform and badge. ‘Will you take this young person to the shelter, Mrs Jenkins?’ He lowered his voice. ‘I daresay it’s a case of shock.’

Mrs Jenkins put her arm around Miranda, smiling gently. ‘There, there, my dear. Come with me and we’ll look after you.’

Miranda broke away from her, frowning. ‘Thank you, but I’m not in shock. I’m hopping mad with the wretch who dropped his bombs on our house,
and
I want to go inside and telephone my mother. She must be told.’

‘Of course she must, dear. But there are procedures to follow. You can phone from the church hall, which is where we’ve set up our emergency shelter.’ Mrs Jenkins beamed at her, but there was a steely glint in her myopic blue eyes and a determined set to her jaw.

Realising that it was useless to protest, Miranda allowed herself to be led like a child to the church hall where another woman gave her a mug of hot, sweet tea and a digestive biscuit. There were several of her neighbours already seated at small tables drinking tea, smoking cigarettes and talking in hushed voices. Colonel Bullwinkle marched in with his bulldog on its lead. ‘I will not tie Buller up outside, madam,’ he said in a loud voice. ‘I didn’t fight in the Great War to be told I can’t bring my dog into the church hall by an officious busybody.’

‘But, Colonel, animals are not allowed in here. If we break the rule for one we would have to do the same for everybody.’

‘Pish-tush, woman. Buller is as well behaved as any properly brought up child, and probably more so. We’ve just escaped death by inches thanks to that Jerry swine, and I want a cup of tea and a bowl of water for my dog. Surely that’s not too much to ask?’

The woman sent a pleading look to Mrs Jenkins, who left Miranda’s side and hurried over to placate
the
irate gentleman. Miranda had known Colonel Bullwinkle since she was a small girl, and she knew who would win this particular battle and it would not be the ladies of the WVS. She took the opportunity to slip out through the side entrance and made her way home. Mr Walker was fully occupied marshalling the Fowler family with their seven unruly children from their house which, although untouched, was next door to Dr Herriot’s house, which had been razed to the ground. Luckily the doctor and his wife were away on holiday. Miranda knew this for a fact as she had been given the back door key so that she could get into the house and water Mrs Herriot’s collection of indoor plants. There would, she thought sadly, be no need to do that now.

She opened the gate and ran down the path, pausing to glance up at the chimney stack which stood alone in the gaping hole where the roof had once been. She let herself into the house and closed the door behind her. Apart from the thick layer of dust and rubble which covered everything, the ground floor appeared to have escaped the worst of the blast. She picked up the telephone receiver and was amazed to find that it was still connected to the exchange. She dialled the number and asked to be put through to her mother’s office. She had been calm until now and feeling slightly detached from everything that was going on around her, but the sound of her mother’s melodious voice with the
charming
lilt of a French accent that she had never quite lost, brought tears to her eyes. ‘Maman, I don’t know how to tell you this, but our house has been bombed and it’s in ruins. You must come home right away.’

‘I’m at home, but we haven’t got a roof and everything is in a terrible mess. I don’t know what to do.’

‘You must get out of there. It doesn’t sound safe.’

‘But all our things are here, Maman.’

‘I’m coming home. I’ll be there as soon as possible. Go to one of the neighbours and wait for me there. The colonel will take you in, I’m sure.’

‘His house is nothing but a pile of rubble, and the Herriots’ too.’

A bubble of hysterical laughter rose in Miranda’s throat. Her mother always lapsed into French whenever her emotions got the better of her, but she rarely swore. ‘It’s all right, Maman. I’ll go to Miss Sharkey’s house. I’m sure she could do with the company.’

‘I’ll be with you as quickly as possible. Please leave the house immediately, Miranda.’

‘Yes. Don’t worry.’ Miranda replaced the receiver but instead of following her mother’s instructions she made her way upstairs, taking each step slowly and carefully. She had no intention of bringing the rest of the house down around her ears but she was
not
going to leave without salvaging at least a change of clothing.

She reached the landing without mishap, but it was strange to look up at what had once been the ceiling and see nothing but blue sky with a few puffy white clouds scudding overhead. She went to her bedroom and gasped in horror at the sight of the plaster, tiles and fragments of brick that covered her bed and littered the floor, but to her surprise and delight the wardrobe placed against the chimney breast had survived intact. She lifted two suitcases from the top and brushed the dust off with her gloved hand, sighing with relief to see that they were dented but not seriously damaged. She opened the wardrobe door and began ripping garments off their hangers. She tossed them into the cases, throwing shoes on top of dresses, handbags and hats. Her underwear was in the deep drawer at the base of the old-fashioned Edwardian piece of furniture and she gathered up an armful of slips, bras and panties. Even as she worked small pieces of tile and rubble had begun to slide off a small section of the roof attached to the chimney stack. Fearing the worst, she slammed the lids on the cases and headed for the stairs, but she hesitated, wondering if she dared risk going into her mother’s room to see if there was anything she could save. She could hear ominous cracking sounds coming from the brickwork but she was determined to salvage something for her mother. Dropping her
cases
on the carpet she crossed the landing to her parents’ room, but a rafter had fallen across the doorway and part of the outer wall had collapsed onto the bed. She felt the floor beginning to shake and she reached in to grab a photo of her father from the chest nearest the door. Tucking it into her pocket she managed to reach the top of the stairs just as a deep-throated rumble preceded the crash of several chimney pots tumbling into the room she had just vacated. She hurried downstairs, hefting her heavy cases, and just made it out of the house before the chimney stack toppled into what had been her bedroom with a thunderous clatter of bricks and cement.