Read The Glass Cage: Automation and Us Online

The Glass Cage: Automation and Us 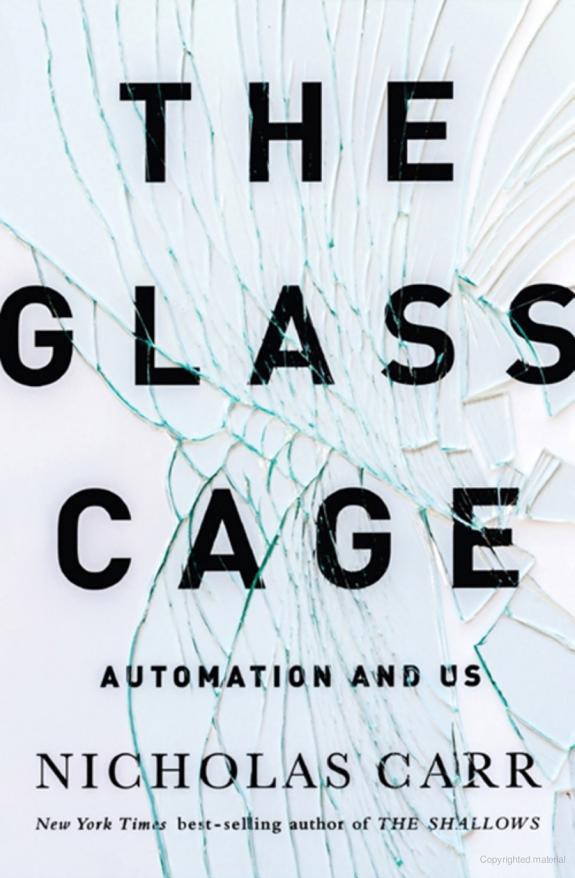 THE ROBOT AT THE GATE

AUTOMATION FOR THE PEOPLE

THE LOVE THAT LAYS THE SWALE IN ROWS

and adjust, no one to drive the car

O
N
J
ANUARY 4
, 2013,
the first Friday of a new year, a dead day newswise, the Federal Aviation Administration released a one-page notice. It had no title. It was identified only as a “safety alert for operators,” or SAFO. Its wording was terse and cryptic. In addition to being posted on the FAA’s website, it was sent to all U.S. airlines and other commercial air carriers. “This SAFO,” the document read, “encourages operators to promote manual flight operations when appropriate.” The FAA had collected evidence, from crash investigations, incident reports, and cockpit studies, indicating that pilots had become too dependent on autopilots and other computerized systems. Overuse of flight automation, the agency warned, could “lead to degradation of the pilot’s ability to quickly recover the aircraft from an undesired state.” It could, in blunter terms, put a plane and its passengers in jeopardy. The alert concluded with a recommendation that airlines, as a matter of operational policy, instruct pilots to spend less time flying on autopilot and more time flying by hand.
1

This is a book about automation, about the use of computers and software to do things we used to do ourselves. It’s not about the technology or the economics of automation, nor is it about the future of robots and cyborgs and gadgetry, though all those things enter into the story. It’s about automation’s human consequences. Pilots have been out in front of a wave that is now engulfing us. We’re looking to computers to shoulder more of our work, on the job and off, and to guide us through more of our everyday routines. When we need to get something done today, more often than not we sit down in front of a monitor, or open a laptop, or pull out a smartphone, or strap a net-connected accessory to our forehead or wrist. We run apps. We consult screens. We take advice from digitally simulated voices. We defer to the wisdom of algorithms.

Computer automation makes our lives easier, our chores less burdensome. We’re often able to accomplish more in less time—or to do things we simply couldn’t do before. But automation also has deeper, hidden effects. As aviators have learned, not all of them are beneficial. Automation can take a toll on our work, our talents, and our lives. It can narrow our perspectives and limit our choices. It can open us to surveillance and manipulation. As computers become our constant companions, our familiar, obliging helpmates, it seems wise to take a closer look at exactly how they’re changing what we do and who we are.

A
MONG THE HUMILIATIONS OF MY TEENAGE YEARS WAS ONE
that might be termed psycho-mechanical: my very public struggle to master a manual transmission. I got my driver’s license early in 1975, not long after I turned sixteen. The previous fall, I had taken a driver’s ed course with a group of my high-school classmates. The instructor’s Oldsmobile, which we used for our on-the-road lessons and then for our driving tests at the dread Department of Motor Vehicles, was an automatic. You pressed the gas pedal, you turned the wheel, you hit the brakes. There were a few tricky maneuvers—making a three-point turn, backing up in a straight line, parallel parking—but with a little practice among pylons in the school parking lot, even they became routine.

License in hand, I was ready to roll. There was just one last roadblock. The only car available to me at home was a Subaru sedan with a stick shift. My dad, not the most hands-on of parents, granted me a single lesson. He led me out to the garage one Saturday morning, plopped himself down behind the wheel, and had me climb into the passenger seat beside him. He placed my left palm over the shift knob and guided my hand through the gears: “That’s first.” Brief pause. “Second.” Brief pause. “Third.” Brief pause. “Fourth.” Brief pause. “Down over here”—a pain shot through my wrist as it twisted into an unnatural position—“is Reverse.” He glanced at me to confirm I had it all down. I nodded helplessly. “And that”—wiggling my hand back and forth—“that’s Neutral.” He gave me a few tips about the speed ranges of the four forward gears. Then he pointed to the clutch pedal he had pinned beneath his loafer. “Make sure you push that in while you shift.”

I proceeded to make a spectacle of myself on the roads of the small New England town where we lived. The car would buck as I tried to find the correct gear, then lurch forward as I mistimed the release of the clutch. I’d stall at every red light, then stall again halfway out into the intersection. Hills were a horror. I’d let the clutch out too quickly, or too slowly, and the car would roll backward until it came to rest against the bumper of the vehicle behind me. Horns were honked, curses cursed, birds flipped. What made the experience all the more excruciating was the Subaru’s yellow paint job—the kind of yellow you get with a kid’s rain slicker or a randy male goldfinch. The car was an eye magnet, my flailing impossible to miss.

From my putative friends, I received no sympathy. They found my struggles a source of endless, uproarious amusement. “Grind me a pound!” one of them would yell with glee from the backseat whenever I’d muff a shift and set off a metallic gnashing of gear teeth. “Smooth move,” another would snigger as the engine rattled to a stall. The word “spaz”—this was well before anyone had heard of political correctness—was frequently lobbed my way. I had a suspicion that my incompetence with the stick was something my buddies laughed about behind my back. The metaphorical implications were not lost on me. My manhood, such as it was at sixteen, felt deflated.

But I persisted—what choice did I have?—and after a week or two I began to get the hang of it. The gearbox loosened up and became more forgiving. My arms and legs stopped working at cross-purposes and started cooperating. Soon, I was shifting without thinking about it. It just happened. The car no longer stalled or bucked or lurched. I no longer had to sweat the hills or the intersections. The transmission and I had become a team. We meshed. I took a quiet pride in my accomplishment.

Still, I coveted an automatic. Although stick shifts were fairly common back then, at least in the econoboxes and junkers that kids drove, they had already taken on a behind-the-times, hand-me-down quality. They seemed fusty, a little yesterday. Who wanted to be “manual” when you could be “automatic”? It was like the difference between scrubbing dishes by hand and sticking them in a dishwasher. As it turned out, I didn’t have to wait long for my wish to be granted. Two years after I got my license, I managed to total the Subaru during a late-night misadventure, and not long afterward I took stewardship of a used, cream-colored, two-door Ford Pinto. The car was a piece of crap—some now see the Pinto as marking the nadir of American manufacturing in the twentieth century—but to me it was redeemed by its automatic transmission.

I was a new man. My left foot, freed from the demands of the clutch, became an appendage of leisure. As I tooled around town, it would sometimes tap along jauntily to the thwacks of Charlie Watts or the thuds of John Bonham—the Pinto also had a built-in eight-track deck, another touch of modernity—but more often than not it just stretched out in its little nook under the left side of the dash and napped. My right hand became a beverage holder. I not only felt renewed and up-to-date. I felt liberated.

It didn’t last. The pleasures of having less to do were real, but they faded. A new emotion set in: boredom. I didn’t admit it to anyone, hardly to myself even, but I began to miss the gear stick and the clutch pedal. I missed the sense of control and involvement they had given me—the ability to rev the engine as high as I wanted, the feel of the clutch releasing and the gears grabbing, the tiny thrill that came with a downshift at speed. The automatic made me feel a little less like a driver and a little more like a passenger. I came to resent it.

M
OTOR AHEAD
thirty-five years, to the morning of October 9, 2010. One of Google’s in-house inventors, the German-born roboticist Sebastian Thrun, makes an extraordinary announcement in a blog post. The company has developed “cars that can drive themselves.” These aren’t some gawky, gearhead prototypes puttering around the Googleplex’s parking lot. These are honest-to-goodness street-legal vehicles—Priuses, to be precise—and, Thrun reveals, they’ve already logged more than a hundred thousand miles on roads and highways in California and Nevada. They’ve cruised down Hollywood Boulevard and the Pacific Coast Highway, gone back and forth over the Golden Gate Bridge, circled Lake Tahoe. They’ve merged into freeway traffic, crossed busy intersections, and inched through rush-hour gridlock. They’ve swerved to avoid collisions. They’ve done all this by themselves. Without human help. “We think this is a first in robotics research,” Thrun writes, with sly humility.
1

Building a car that can drive itself is no big deal. Engineers and tinkerers have been constructing robotic and remote-controlled automobiles since at least the 1980s. But most of them were crude jalopies. Their use was restricted to test-drives on closed tracks or to races and rallies in deserts and other remote areas, far away from pedestrians and police. The Googlemobile, Thrun’s announcement made clear, is different. What makes it such a breakthrough, in the history of both transport and automation, is its ability to navigate the real world in all its chaotic, turbulent complexity. Outfitted with laser range-finders, radar and sonar transmitters, motion detectors, video cameras, and GPS receivers, the car can sense its surroundings in minute detail. It can see where it’s going. And by processing all the streams of incoming information instantaneously—in “real time”—its onboard computers are able to work the accelerator, the steering wheel, and the brakes with the speed and sensitivity required to drive on actual roads and respond fluidly to the unexpected events that drivers always encounter. Google’s fleet of self-driving cars has now racked up close to a million miles, and the vehicles have caused just one serious accident. That was a five-car pileup near the company’s Silicon Valley headquarters in 2011, and it doesn’t really count. It happened, as Google was quick to announce, “while a person was manually driving the car.”
2

Física de lo imposible by Michio Kaku
Fairfield Hall by Margaret Dickinson
Secret Scorpio by Alan Burt Akers
Fall From Grace by Zolendz, Christine
Zachary's Gold by Stan Krumm
How To Give A Blow Job - Oral Sex He'll Never Forget by Jenkins, Jenna
Sold (Keeping her in the Dark) by Sansom, Leslie
Shooting for the Stars by Sarina Bowen
20,000 Leagues Under the Sea by Jules Verne
Wounded Pride by Mae, Mandee