Read The Goddess of Buttercups and Daisies Online 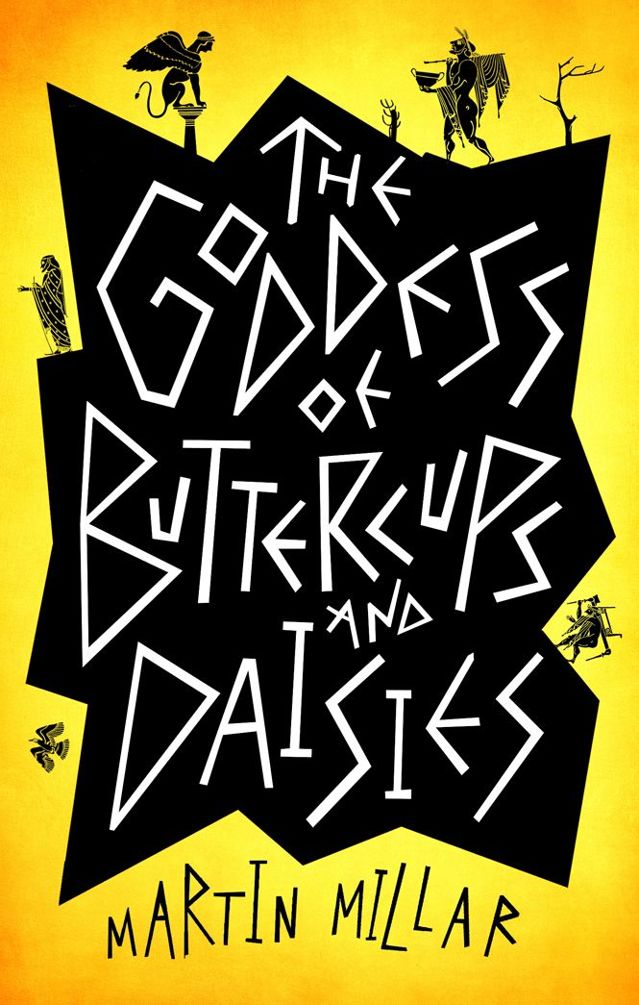 ‘Martin Millar writes like Kurt Vonnegut might have written, if he’d been born fifty years later in a different country and hung around with entirely the wrong sort of people’ Neil Gaiman

‘Imagine Kurt Vonnegut reading Marvel Comics with The Clash thrashing in the background. For the deceptively simple poetry of the everyday, nobody does it better’
List

Martin Millar
was born in Scotland and now lives in London. He is the author of such novels as
Lonely Werewolf Girl
,
Curse of the Wolf Girl
and
The Good Fairies of New York
. Under the pseudonym of Martin Scott, he, as
the Guardian
put it, ‘invented a new genre: pulp fantasy noir’.
Thraxas
, the first book in his Thraxas series, won the World Fantasy Award in 2000. As Martin Millar and as Martin Scott, he has been widely translated.

Curse of the Wolf Girl

The Good Fairies of New York

Ruby and the Stone Age Diet

The Anxiety of Kalix the Werewolf

The City of Athens, 421 BC
Aristophanes, playwright

The agora was always busy. Everyone shopped there. Coins flew from mouth to hand, and from hand to till, as goods were bought and sold. Merchants shouted out prices, friends exchanged greetings and news, while the occasional small boy, on the run from his tutor, made a dash for the safety of the stalls. With the Dionysia festival almost due to start, it was busier than ever.

Aristophanes enjoyed his regular visits. It wasn’t that he was particularly good at buying supplies, or running his household – he left most of that to his chief servant Epiktetos – but it was a fine place for observing people. Many events that ended up in his plays had their roots in the agora. People knew he was observing them. They didn’t mind. Mostly it gave rise to mirth.

‘Don’t let Aristophanes see you doing that, he’ll put you in his next comedy!’

Sosinos, at his stall selling honey cakes, greeted him warmly. ‘Aristophanes, when are you going to put me on stage?’

‘There’s no actor handsome enough to play you, Sosinos.’

The stallholder laughed, as he always did. Sosinos had a reasonable stock of cakes on display, which wasn’t always the case. After ten years of war, with no end in sight, supplies of everything had run low. Sosinos’s honey cakes were one of the few treats left in the city.

‘Haven’t seen you for a few days. Busy at rehearsals?’

Aristophanes made a face, and asked Sosinos if he still gambled.

‘Then bet on the opposition. My play’s a disaster.’

‘Come on, Aristophanes, it can’t be that bad.’

‘It is. There’s more chance of the Goddess Athena turning up here with a supply of honey cakes than there is of me winning first prize this year.’

Bremusa hung back while the Goddess Athena spoke to the Goddess Hera. Bremusa had been on Mount Olympus for almost eight hundred years, but she’d never really felt that Hera accepted her. Perhaps because she was an Amazon. Or perhaps Hera just didn’t like latecomers. There were many people whom Hera didn’t like.

‘I hear you’ve been talking to Helios.’ Hera’s voice carried the faint tone of disapproval that residents of Olympus were used to hearing.

Athena smiled pleasantly. She was never intimidated by Hera. ‘Indeed. I asked him to provide fine weather for the Dionysia.’

That was something of an insult, Athena being patron of Athens.

‘But perhaps they deserve a good festival,’ continued Hera. ‘The way things are going, it might be their last.’

She smiled and went on her way, up the mountain. Athena looked momentarily troubled. Hera’s barb had landed. The goddess knew that the war between Athens and Sparta was costing her city dearly. The Athenians may have had the finest navy but the Spartan army dominated the field. In the campaigning season, the Athenians were forced to withdraw behind their city walls, while the Spartans destroyed their crops and their lands. The city could not sustain that indefinitely.

‘Sparta isn’t doing that well either,’ muttered Athena, which was true. Ten years of warfare had almost brought both city-states to their knees.

Bremusa followed Athena into the goddess’s mansion. When Bremusa had first seen the building, shortly after Athena plucked her off the battlefield at Troy, she’d been startled by its luxury. The marble columns, the pool, the Corinthian couches, the statues, the amphoras – all had been new to her, and startling to a woman raised among the frugal Amazons. She was used to it now.

‘Aren’t they holding a peace conference?’

Athena frowned. ‘It’s not going as well as I’d hoped. When both of their war leaders were killed, I thought they’d make some progress.’

‘Athens and Sparta have never had any problem finding new war leaders. Why not just let them fight it out?’

The Goddess Athena was blond-haired and grey-eyed. That had been another surprise to Bremusa, the first time she’d encountered her.

‘The war’s gone on long enough, Bremusa. I love Athens but I’m also patron of Sparta. I don’t want to see any more destruction. They need time to recover.’

‘Maybe they’re weak and deserve to be destroyed.’

‘You’d have died at Troy if I hadn’t snatched you away before Idomeneus’s spear pierced your heart.’

‘I wasn’t complaining,’ said Bremusa, rather tersely. She didn’t like to be reminded of her defeat at the hands of Idomeneus of Crete.

‘I know. When I brought you to Mount Olympus you wanted to go back and fight again. But you’re an Amazon, Bremusa. Not everyone has your endless enthusiasm for war. Look at all these prayers from Greeks, asking for peace.’

Athena indicated the great cedar-wood table in front of the shrine, on which, every day, her servants carefully laid out the prayers made by Athenians to the goddess. Each one was carefully transcribed onto a neat piece of parchment. There was one very large bundle; prayers asking for peace.

Bremusa pointed to a smaller pile beside them. ‘What about those?’

‘Prayers for victory,’ said the goddess. ‘Not so many.’

‘Still a reasonable bundle though. Not everyone in Athens wants peace.’

‘The weapon-makers are a powerful lobby. They’ve got some ambitious generals on their side.’

Bremusa noticed another pile of prayers at the corner of the table. ‘What are they?’

The goddess sighed. ‘Prayers from Luxos.’ She picked up one of the pieces of parchment. ‘“Dear Goddess Athena. Please help me become a successful lyric poet. No one will give me a chance because I’m the son of a poor oarsman. I know I can succeed as a poet if I can only get started. You have always been my favourite goddess. Love, Luxos.”’

Bremusa, rather grim-faced as a rule, couldn’t prevent herself from smiling. ‘He doesn’t give up, does he? How many’s that?’

‘Does he perform the appropriate sacrifices when he prays?’

‘No. But he did leave a daisy on my altar.’ The goddess stared at the tiny flower. ‘It’s not the greatest offering I’ve ever had.’