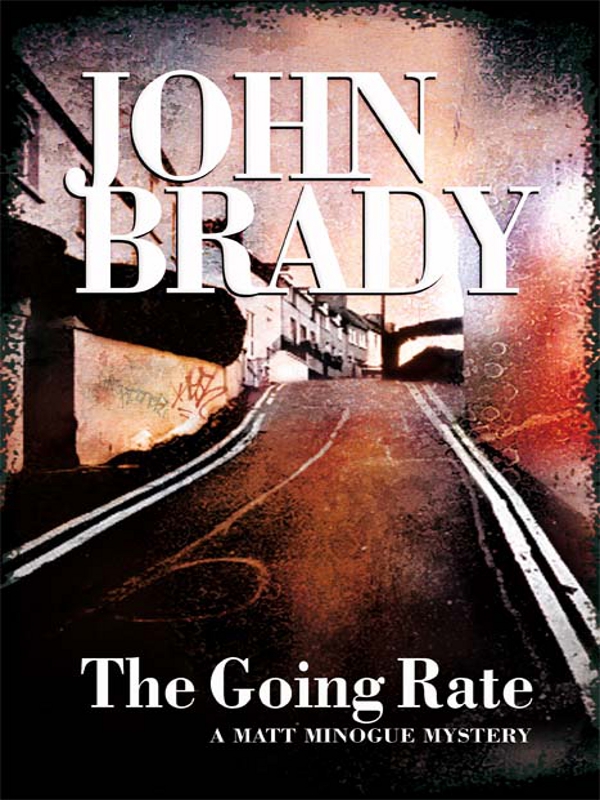 “IF THERE ARE AUTHORS BETTER THAN JOHN BRADY at chronicling the events of modern Ireland, I HAVEN'T YET READ THEM . . . Brady's best so far.” â G
LOBE AND
M
AIL

“Brady has a great eye for the telling detail . . . and a lovely slow pace of storytelling. There's much talk and thought about events and you can't read this book at warp speed. Instead, save it to savour.”
â G
LOBE AND
M
AIL

“As lyrical and elegantly styled as the last three . . . A FIRST-RATE STORY WITH MARVELLOUS CHARACTERS . . . Another masterful tale from a superior author.” â G
LOBE AND
M
AIL

“Nothing gets in the way of pace, narrative thrust or intricate story-telling.” â I
RISH
T
IMES

“MATT MINOGUE, THE MAGNETIC CENTRE OF THIS SUPERB SERIES . . . and Brady's tone of battered lyricism are the music which keep drawing us back to this haunting series.” â N
EW
Y
ORK
T
IMES

“Culchie Colombo with a liberal and urbane heart . . . like all the best detective stories it casts its net widely over its setting . . .
[Minogue is] a character who should run and run.” â I
RISH
T
IMES

A Stone of the Heart

“Towers above the mystery category as AN ELOQUENT, COMPELLING NOVEL . . . a tragic drama involving many characters, each so skillfully realized that one virtually sees and hears them in this extraordinary novel . . .” â P
UBLISHERS
W
EEKLY

“A MASTERFULLY CRAFTED WORK of plot, atmosphere and especially characterization . . . Minogue, thoughtful, clear-eyed and perhaps too sensitive . . . is a full-blooded character built for the long haul of a series . . .” â M
ACLEAN'S

“Brady, like Chandler, has a poet's eye for place...(he) is emerging as one of the supreme storytellers of Canadian crime fictions.” â G
LOBE AND
M
AIL

This ebook edition published in 2011 by McArthur & Company

All rights reserved. The use of any part of this publication reproduced, transmitted in any form or by any means, electronic, mechanical, photocopying, recording or otherwise stored in a retrieval system, without the expressed written consent of the publisher, is an infringement of the copyright law.

For Hanna,
Strength and love; trust and patience.

T
HE DAYLIGHT PART BEGAN
with his awakening to the sound of a door chime. Pieces soon began to fall into place. He was in Martin's house, in Martin's bed. Martin's wife Bernie was no longer beside him, however.

He remembered vodka, and lager, and a bit of hash that Bernie had found in one of Martin's toolboxes after his arrest. It was gone three o'clock when he had finished with Bernie. They had done pretty well everything. He remembered her complaining she didn't want to do it anymore. Well, that only egged him on, and sore or not, she looked happy enough with the proceedings. Of course she could have been faking it. Big surprise, there. It wouldn't be the first time, would it, and she was a bit afraid of him, after all. He didn't mind that one bit.

His mouth was cracked and furry, and his eyes felt like they had been shoved back hard into his head. He rubbed the hardened goop from the edges of his eyes, and he tried to swallow. There was light on the curtains. He found the alarm: nearly ten o'clock? Jesus. He lay still, listening. There were footsteps coming up the stairs now. He kicked away the sheet and the eiderdown. The chill air washed over him, and he rolled sideways to reach under the bed for the pistol. He was on his feet when Bernadette came in the door. She was breathing hard. She wasn't even trying to hold her dressing gown closed. Her mouth hung open and for several moments she stood still, her chest heaving so much the shadow between her breasts seemed to have a life of its own.

He kept up his stare, waiting for a giveaway sign.

“What're you looking at me like that for? I didn't call them, did I.”

The redness around her mouth and neck from last night seemed to be getting even deeper.

The doorbell's ring was ten times louder this time.

Mulhall picked up his underpants and jeans on his way to the window. He got his second leg in as he inched the curtain away from the wall. The white van out on the road was open, and there were tools and pipes on the bed of it. An average looking joe in overalls was setting up a workmate by the curb.

“I don't know anything about this, Darrenâ”

He realized that he was shaking, and that she could see it.

He put the pistol on the bed, and leaned his back against the wall while he pulled on his jeans. A cool head, and a dry pants, he thought. Overreacting was the worst thing to do.

His T-shirt was on the chest of drawers.

She shook her head, but her eyes stayed on the pistol.

“Go back downstairs. Tell him you're coming.”

She seemed paralyzed. Her eyes moved from the pistol and back to him. He swore and shoved her toward the door. He tried to keep in step with her as she descended the stairs, whispering.