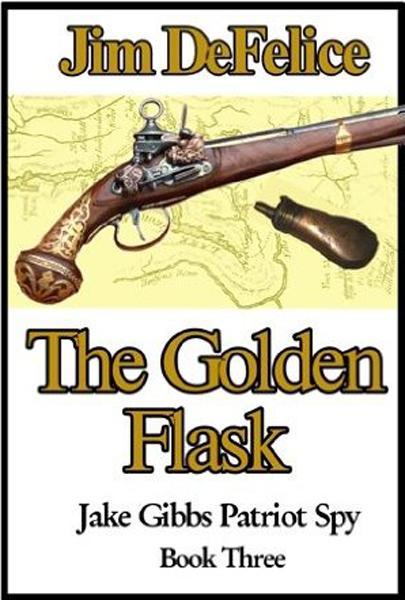 All rights reserved. No part of this book may be used or reproduced in any manner without the author’s permission except in the case of brief quotations attributed to the author, or embodied in critical articles or reviews.

You may contact Jim at
[email protected]
, or visit his website at Jim DeFelice.com on the world wide web.

B
y now, many readers
will be familiar with the history of these stories, which are loosely translated from some old manuscripts found in the root cellar of an eigh
teenth-century farm. Whether the originals were intended as history or fiction is difficult to tell. The
places described are verifiably real, as are most of the
people and situations. Anyone interested in some of
the surrounding history will find some notes addressing
it at the end of the book.

The original author's sympathies were clearly on the
side of the Revolutionists, and so we must forgive his
occasional lapses into partisanship. My contribution has been to update the language here and there, and
fight against his habit of puffing out the simplest de
scriptions and going on for pages when a single para
graph will do.

In one of the strangest and most bewildering events
of the war, the British army that had been harrying
New Jersey during the early summer of 1777 suddenly
gave up its efforts to force General Washington into a
decisive battle. Under the command of Sir William
Howe, some 20,000 redcoats, Hessians, and various
hangers-on marched onto ships and disappeared into the mists of the Atlantic.

They were obviously preparing for a new invasion,
but General Washington wasn't sure where. On the one
hand, Philadelphia seemed a logical choice: difficult
to defend, it was the capital of the Revolutionary congress and had ostensibly been Howe's target during his
Jersey campaigns. Yet there were rumors of an attack
up the Hudson toward Albany, and intelligence pegged
Boston as the next British prize.

The loss of any of these cities would be devastating, but Washington could not guard all three. Just at the
moment he was about to choose where to march his army, a letter fell into his possession from General Howe giving his place of attack as "B—."

The writing was in Howe's hand, and even a schoolboy would realize "B—" was Boston. But was the letter
a ruse?

The commander-in-chief faced the most perplexing dilemma of the war. March to Boston, and Albany and
Philadelphia were free for the plucking. Hesitate for more than a few short days, and the British would dance their way through New England.

There was only one way to discover Howe's true intentions: Send the most illustrious member of the Secret Service into New York to find out what Howe was up to.
And therein lies our present tale.

Wherein, a riot threatens to break out where a ball had
been, and Jake is challenged to a duel.

H
e
was unarmed, his
ribs throbbed from several re
cent injuries, and he was about to come under severe
attack.

A lesser man might have quaked in his low, silver-
buckled shoes. But Lieutenant Colonel Jake Stewart Gibbs took the charge manfully, extending his uniformed arm with grace as Mother Schuyler took his hand and led him through the minuet.

Jake even smiled. It was the price one paid for danc
ing with her daughter Betsy.

"You are as fine a dancer as a soldier," said Catherine Schuyler as the music ended.

He bowed gracefully, his hand carefully placed on
his side to keep the bandages on his ribs from bursting.
He'd only risen from the convalescent bed this morn
ing — against the wishes of his nurse, who happened to
be Betsy herself.

"I can see where your daughter learned her charms,"
Jake told his hostess as he took her arm and steered
her from the dance floor. "I wonder if you two con
spired against me."

The ball was being held in the Schuylers' Albany
mansion, known as the Pastures. Despite the poor news
from the north, most of the city's social elite had gath
ered.

"My husband's orders were quite specific," said
Catherine Schuyler. "You are to stay in Albany this
evening and meet him tomorrow only if your wounds
have healed sufficiently. You look quite handsome in
that uniform," she added. "And your hair has completely covered the awful slash you arrived with."

"I have had more severe cuts from errant barbers,"
replied Jake.

This was just the sort of lie dashing young spies are
always telling young women, but it had a considerably
different effect on the middle-aged matron. Mrs. Schuyler frowned and her soft, sweet voice trans
formed to a scold. "Don't tell me your tales," she said,
waving her finger up at his face. "It is only a miracle
you survived. The first night they laid you in the bed, I
thought you were dead."

"Oh, I've been much closer to death. There was the
time in Quebec when the governor caught me in his
office, for instance. And two months ago on the
HMS
Richmond
the noose was already on my neck. Your
friend Claus van Clynne saved me from that predica
ment."

"You were close to death indeed," interjected Colo
nel Thomas Flanagan, appearing at Jake's right. Gen
eral Schuyler had pressed Flanagan into serving as his
substitute at the ball while he attended to more difficult matters further north.

"Van Clynne is no friend of ours," sniffed Mrs.
Schuyler. "He goes about styling himself a squire when
he has no land at all."

"He is a bungler and a thief," charged Flanagan.

"Come, Colonel, I understand you have done business with Claus yourself."

"Business, yes — I should like to meet him here to
night. We have a matter to discuss."

"Claus van Clynne was not invited," said Mrs. Schuy
ler. "Nor would he be welcome."

"He speaks highly of you," said Jake.

"That is a bolder lie than the one about your wound," she replied.

"I am surprised to see you in uniform," said Flana
gan. "I did not think the Secret Service was given to
wearing them."

"I think it is quite becoming," said Betsy Schuyler,
fluttering her skirts as she reached them. She had tem
porarily managed to extricate herself from a line of suitors to check on her patient. "Much better than the
clothes he arrived in." Betsy hooked her arm in Jake's.
"Our own tailor made it. I think the blue of his jacket
matches his eyes. His breeches are pleasing as well. Very snug."

"And here I thought you were spoken for," Flanagan
hinted to Jake.

"I have heard of no wedding vows," answered Betsy
sharply. "Nor an engagement given."

"Sarah has been in Boston to attend a sick aunt,"
Jake explained. "I have not seen her since I returned,
though I sent word to her father."

The muscles in Betsy's arm tensed, telling Jake she wished he would reconsider the points he had made in
their conversation that afternoon. In truth, he found
Betsy a nearly perfect woman, beautiful and intelligent,
plucky and brave. She had only one short-coming:
General Phillip Schuyler, commander of the northern
department of the Continental Army, was her father. And despite Schuyler's recent kindness, Jake did not have a particularly high opinion of him.

He kept that opinion steadfastly to himself, however.
Sarah's claim was older and deeper, as he had ex
plained to Betsy — though it was obvious she had not
accepted his words as final.

"Perhaps one of you gentlemen will get me some
punch," hinted Betsy's mother Catherine.

"I have some business to attend to," said Flanagan.
"But I'm sure Colonel Gibbs will oblige."

Mrs. Schuyler was waylaid by an old acquaintance as
the trio headed across the room, leaving Jake and Betsy to find the table themselves.

"You are the only one here who does not seem on edge," said Betsy. Her lilac perfume tickled his nose as the hoops of her brocaded skirt swirled against his side. He had to admit there were much less pleasant ways to spend an evening.

"Don't believe everything you see. I would much prefer to be doing something useful."

"Do you think Burgoyne will attack Albany?"

"He will try to reach it," said Jake.

"Does my father have the troops to stop him?"

The note in her voice surprised him. Jake took hold of Betsy's elbow as he looked down into her eyes. The girl was devoted to her father, but even she couldn't hide her doubts.

Despite his own feelings toward the general, Jake's first impulse was to try and reassure her.

"Don't tell me not to worry," she said before he could speak. "Don't be like the others. Be honest."

Exile to the Stars (The Alarai Chronicles) by Dale B. Mattheis
Oh What a Paradise It Seems by John Cheever
Medianoche by Claudia Gray
Unlikely Venture (The Venture Series Book 1) by Luciani, Kristen
The Death of Corinne by R.T. Raichev
Stealing the Countess by David Housewright
Resurrection (Wesson Rebel MC Series Book 3) by Colt, Shyla
Ice Drift (9780547540610) by Taylor, Theodore
Knightley's Tale by Destiny D'Otare
Deadlocked 5 by Wise, A.R.