Read The Gospel According to Judas by Benjamin Iscariot Online

The Gospel According to Judas by Benjamin Iscariot 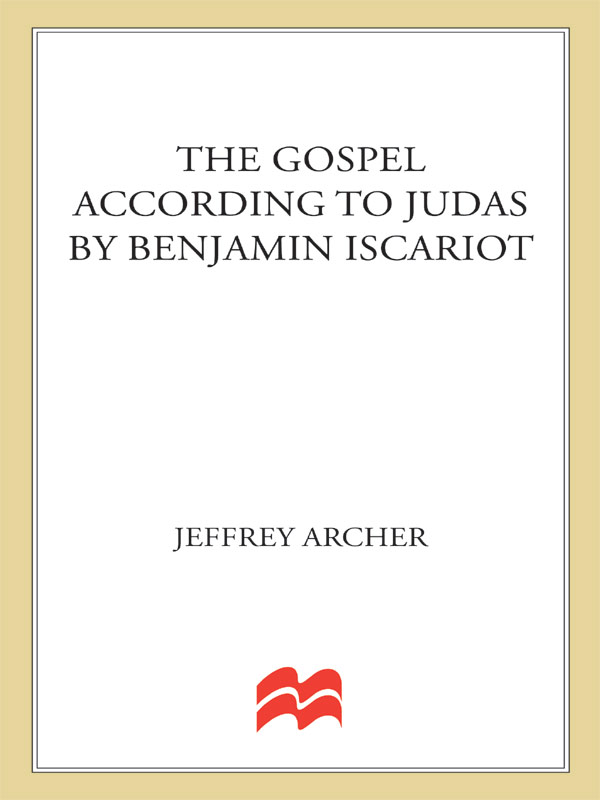 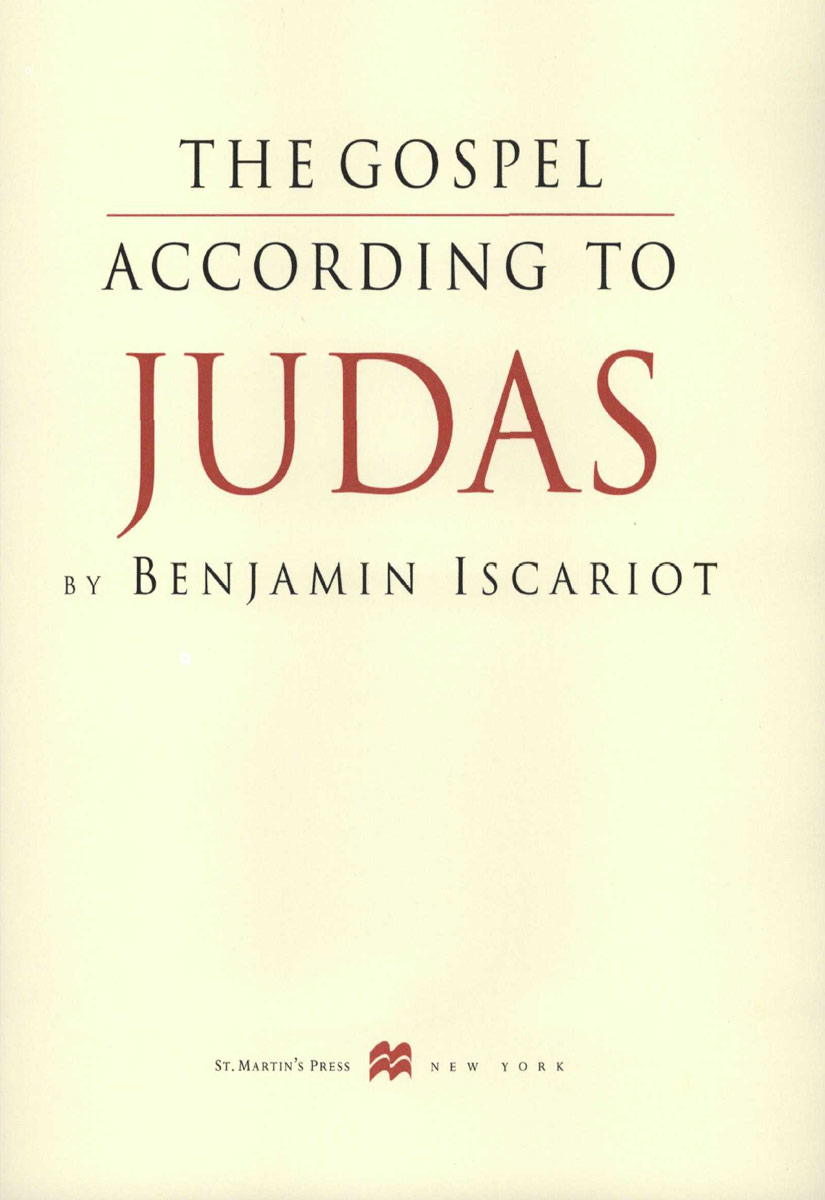 THE GOSPEL ACCORDING TO JUDAS is the result of an intense collaboration between a storyteller and a scholar.

The unlikely partnership of
Jeffrey Archer
and
Francis J. Moloney
was formed, after Archer had sought advice from
Cardinal Carlo Maria Martini
on who should guide him through this demanding project. Among his many past students of the Pontifical Biblical Institute, Cardinal Martini singled out Professor Francis J. Moloney, a graduate of that institute in 1972, who had completed his doctoral studies at Oxford University in 1975.

The project was as bold as it was simple. Archer would write a story for twenty-first-century readers, while Moloney would ensure that the result would be credible to a first-century Christian or Jew. 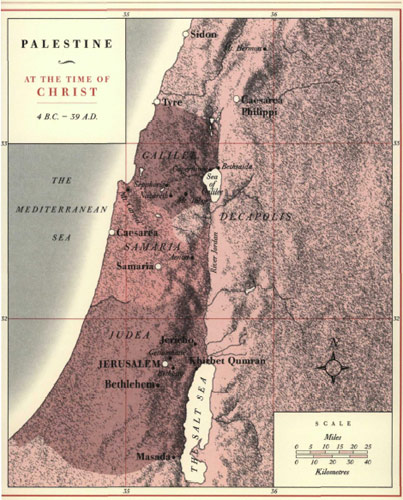 Chapter 1
Behold the Lamb of God

Chapter 2
Prepare the way of the Lord

Chapter 4
Who is this man?

Chapter 5
Are you he who is to come?

Chapter 6
Your sins are forgiven

Chapter 7
The Sabbath was made for man

Chapter 8
The rock upon which he would build his church

Chapter 9
Whenever you pray, speak these words

Chapter 10
Give them something to eat

Chapter 11
Who do people say that I am?

Chapter 14
You are people of little faith

Chapter 15
You have chosen to follow a dangerous man

Chapter 16
Go your way and do likewise

Chapter 17
The Lord hath need of him

Chapter 18
He must die to save our nation

Chapter 19
Render unto Caesar the things that are Caesar's

Chapter 20
One of you here present will betray me

Chapter 22
I do not know the man

Chapter 23
My God, my God, why have you forsaken me?

Chapter 24
Cursed is anyone who hangs from a tree

Chapter 25
The sins of the father

Chapter 1
Behold the Lamb of God

1.
This gospel is written so that all may know the truth about Judas Iscariot and the role he played in the life and tragic death of Jesus of Nazareth.

2.
Many others have told the story of Jesus, recounting all that he said and did during his short time on earth.

3.
Some were witnesses to what actually took place and they passed on, in the Jewish tradition of word of mouth, what they had seen and heard.

4.
Others have written further accounts of the life of Jesus Christ, the son of God. These have come to be known as Gospels.

5.
One of those who were eyewitnesses to these events was my father, Judas Iscariot.

6.
I, Benjamin, son of Judas Iscariot, his first born, listened to my father's account of what took place at that time, and have recorded accurately all that he saw and heard, initially in Aramaic â the language Jesus spoke â and then Greek, which my father taught me from a young age.

7.
My father brought me up in the strict traditions of the Torah, and like him I have come to believe that Jesus of Nazareth was a prophet and a true son of Israel, but not the long-awaited Messiah.

8.
Several other Gospels have recently been written, giving their version of what took place during Jesus' lifetime. But only a few of
them, not accepted by the new sect known as Christians, come close to giving a fair account of my father's actions during this period in our history.

9.
The others do not begin to understand, or fairly record, Judas' passionate belief in and commitment to Jesus of Nazareth. Indeed, they have blackened my father's name to the point where he is now thought of as the most infamous of all Jesus' followers.

10.
He has been branded a traitor, a thief and a man willing to accept bribes, and one Gospel even falsely reports that he took his own life.

11.
None of these judgments, mostly reported since the tragic death of Jesus, was made during his lifetime.

12.
Some, determined to prove their case, have suggested that the name Iscariot originates from the Roman word
Sicarii
, which translated means âdagger-bearing Zealot'.

13.
Others have stated that it comes from the Hebrew
saqar
, denoting âthe false one'.

14.
The truth is that the name Iscariot derives from the Hebrew
ish-kerioth
, meaning âone from Kerioth', the town in which Judas was born.

15.
My father's origins spring from the tribe of Judah. He was raised in Kerioth, a town mentioned in the early history of Israel, loyal to the ancient traditions of the Jews.

16.
The Christians continue to spread the word throughout Galilee that Judas was a man of violence, a hanger-on and someone who could not be trusted. Despite contrary evidence, these libels are still abroad and often repeated by the followers of Jesus, even to the present day.

17.
Judas Iscariot was in fact a disciple of John the Baptist, and
willingly obeyed his command:
There goes a man of God, follow him
.

18.
From that day, my father became a follower of Jesus of Nazareth, and was so trusted by the Master that he was later chosen to be one of his twelve disciples.

19.
As a child, I listened to my father's account of Jesus' ministry, and later recorded his words when I visited him at Khirbet Qumran, shortly before he was put to death by the Romans.

20.
My father has now returned to the God he loved and served so faithfully.

Chapter 2
Prepare the way of the Lord

1.
Judas was a disciple of John the Baptist, and when the prophet first appeared in the wilderness, many considered that the prediction of the Prophet Malachi was fulfilled:
Know that I am going to send you Elijah the Prophet before the day of the Lord comes, that great and terrible day
.

2.
John the Baptist lived just as Elijah had lived:
a man dressed in a cloak of camel's hair, with a leather belt around his waist and eating wild locusts and honey
.

3.
Judas believed that with the return of Elijah, the day of the Lord was surely at hand. John the Baptist was the voice of one crying in the wilderness:
Prepare the way of the Lord, make straight a highway for our God
.

4.
Many considered that John himself was fulfilling Israel's prophetic hopes, and must therefore be the Messiah. But he told Judas that he was not that man:
After me will come a man who is far greater than I am
.

5.
John regarded himself as so inferior to the one who was still to come that he often said that he was
not worthy to stoop down and untie his sandal;
a task fit only for a slave.

6.
Jesus was the son of Joseph and his wife Mary. He came from Nazareth to be baptized by John, who was his cousin.

7.
Many stories of Jesus' birth and upbringing have been recounted,
but Judas always believed that Jesus was the first born of the lawful wedlock between his father, Joseph, and his mother, Mary.
Is this not the carpenter, the son of Mary and brother of James and Joses and of Judah and Simon, and are not his sisters here with us?

8.
Some of the stories about Jesus' birth that were being voiced at the time were nothing more than Greek myths that tell of gods in heaven who produce offspring following a union with women of this earth.

9.
Whenever stories of Jesus' birth are reported, all faithfully record that Joseph, his father, was originally from Bethlehem, the city of David, and that a child was born to his mother Mary.

10.
These were difficult times for any Jewish family. King Herod ruled by fear, and allowed the Roman soldiers to wander the length and breadth of the land doing much as they pleased. It was not unusual for young women to be defiled by these pagans.

11.
Joseph must have decided that in order to avoid any confrontation with the Romans, he and his wife Mary would make the dangerous journey to the remote village of Nazareth in Galilee.

12.
In Nazareth, Joseph, a carpenter, found work among those building the great city of Sepphoris, while Mary and the rest of the family settled in the village.

13.
It was while Jesus was growing up in Nazareth that he was taught the traditions of Israel by his righteous father Joseph, a son of David, and his mother Mary, a true daughter of Sion.

14.
Even though Jesus is always thought of as a Nazarene, he was born in Bethlehem, the city of David.

Yours, Mine & Ours by Jennifer Greene
Hate Me Today (Save Me #3) by Katheryn Kiden
Turn on a Dime - Blane's Turn by Snow, Tiffany
Haunted by Merrill, R.L.
Me and You by Niccolò Ammaniti
World of Glass by Jocelyne Dubois
Cynders & Ashe by Elizabeth Boyle
All or Nothing by Natalie Ann
Insatiable by Cari Quinn
Mistletoe Between Friends by Samantha Chase