Read The Gospel of Loki Online

The Gospel of Loki 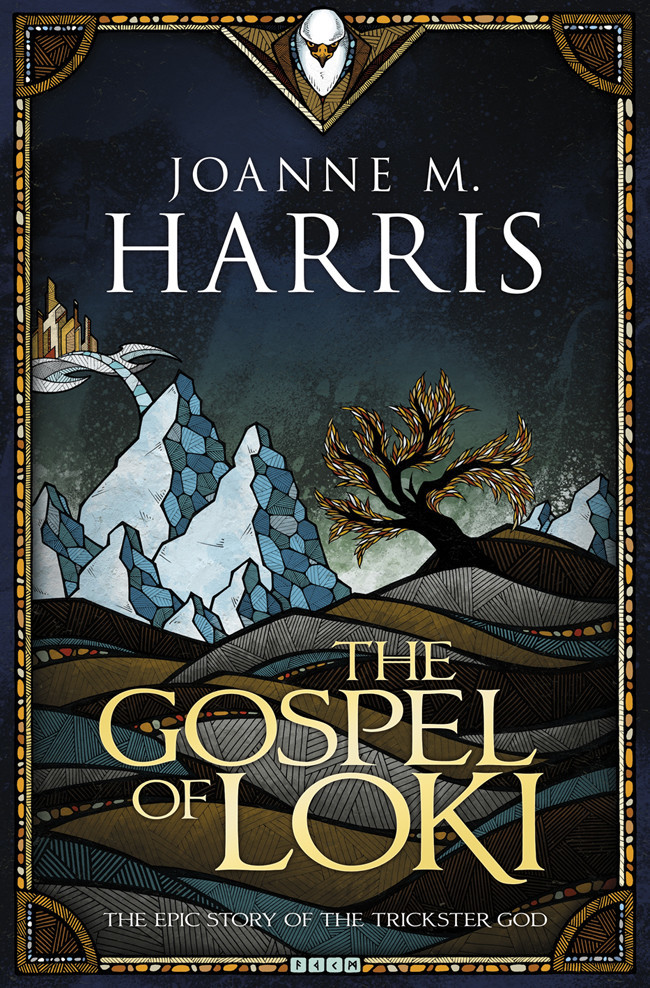 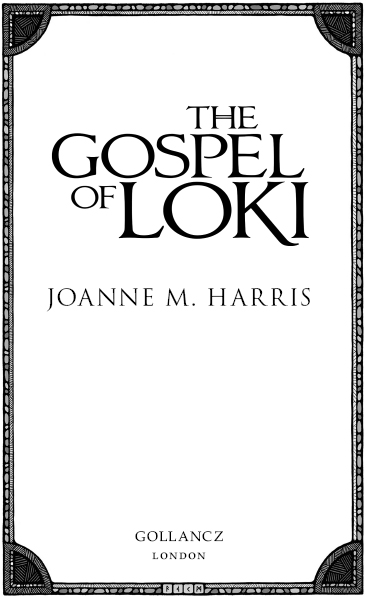 Lesson 8 Past and Present

The Prophecy of the Oracle

Heartfelt thanks to everyone who has helped this book cross over from Dream and onto your Kindles and bookshelves. To Jon Wood of Orion Books goes the rune of persistence, humour and enthusiasm. To Gillian Redfearn from Gollancz, the rune of energy and imagination. To Jenn McMenemy, the rune of success (which is also the rune of chocolate), and to Jemima Forrester, the rune of communication. The rune of fabulous artwork goes to Andreas Preis, and the rune of getting important things done to Sophie Calder. To Anne Riley, the rune of staying afloat when the paperwork threatens to drown us all; to Becca Marovolo the rune of believing in oneself, even when no-one else does; and to Mark Richards, the rune of putting things in their rightful places. To Peter Robinson goes the rune of quietly turning the Worlds when everyone else has gone to sleep, and to Kevin and Anouchka, the rune of Mexican food, big hugs, hot tea and always knowing where you belong.

It takes Nine Worlds to make a book, or so it seems from my side of the desk. Editors, copy-editors, proofreaders, designers, artists, sales and marketing teams, book reps, booksellers, website designers. And you, of course. The readers; the tweeters; the bloggers; the dreamers; the fans - all the people who open the door and step inside these worlds that we build. Without each other, we wouldn’t be here. The last rune goes to all of you. You know what it is. Use it carefully.

These are the people you’re going to meet in the pages of this book. A word of advice before you start: don’t trust
any
of them.

(aka the Popular Crowd)

Odin
– aka One-Eye, Allfather, the Old Man, the General. Leader of the Aesir. Knows how to sell himself (and others). Would throw his brother to the wolves (and did) for a percentage.

Thor
– the Thunderer. Likes hitting things. Not a fan of Yours Truly.

Sif
– his wife. Nice hair. Also not a fan of mine.

Balder
– god of peace. Yeah, right. Known as Balder the Fair. Handsome, sporty, popular. Sound a little smug to you? Yes, I thought so too.

Freyja
– goddess of desire. Vain, petty and manipulative. Will sleep with practically anyone as long as jewellery is involved.

Frey
– the Reaper. Twin brother of the above. Not a bad guy, but a fool for blondes.

Sigyn
– handmaid of Freyja. Adoring wife. Possibly the most annoying woman in the whole of the Nine Worlds.

Heimdall
– the Watchman. Not a fan. Has it in for Yours Truly.

Hoder
– Balder’s blind brother. A better shot than you might think.

Honir
– the Silent. Never shuts up.

Skadi –
the Snowshoe Huntress. Not one of my biggest fans. The words ‘forgive and forget’ don’t feature in her vocabulary. Has a thing about bondage. And snakes.

Ran
– custodian of the drowned. Strangely enough, likes to party.

Týr
– god of war. Brave, but not bright.

(including: demons, monsters, warlords, freaks and other undesirables)

Yours Truly
– Your Humble Narrator. Otherwise known as the Trickster; the Father of Lies; Loki; Lucky; Wildfire; Dogstar and various other epithets, not all of them flattering. Not the most popular guy around.

Hel
– his daughter, guardian of the Dead.

Jormungand
– the World Serpent, demon offspring of Yours Truly.

Angrboda
– or Angie. Mother of the three above. So shoot me. Turns out I’m not naturally monogamous.

Dvalin
– a smith. One of the sons of Ivaldi.

Brokk
– a smith. Good at sewing.

Gullveig
-
Heid
– the Sorceress. Renegade of the Vanir. Mistress of runes. Shapeshifter extraordinaire. Greedy, clever and spiteful. All my favourite qualities . . .

Lord Surt
– ruler of Chaos. Or whatever you call the lord of a place that, by definition,
has
no rules.

That
was the Authorized Version. The Prophecy of the Oracle, as told to Odin Allfather by the Head of Mimir the Wise, and dealing, in thirty-six stanzas, with all of the history of the Nine Worlds, from ‘Let there be light’ to Ragnarók.

Well, this
isn’t
the Authorized Version. This is
my
version of events. And the first thing you have to understand about this little narrative is that there
is
no real beginning. Or real end, for that matter; although, of course, there have been many of both. Multiple endings, multiple beginnings, woven together so tightly that no one can tell them apart any more. Endings, beginnings, prophecies, myths, stories, legends and lies, all part of the same big carpet; especially the lies, of course – which is what you knew I’d say, me being the Father and Mother of Lies, but this time it’s at least as true as anything you’d call
history
.

See, this is the thing about history.
His
story. That’s all it is. The Old Man’s version of events, which basically the rest of us are supposed to accept as the undisputed truth. Well, call
me cynical, but I’ve never been one to take things on trust, and I happen to know that history is nothing but spin and metaphor, which is what all yarns are made up of, when you strip them down to the underlay. And what makes a hit or a myth, of course, is
how
that story is told, and by
whom
.

Most of what we know as history came to us from a single text: ‘The Prophecy of the Oracle’. It’s an old text, in an old language, and for a long time it was pretty much all the knowledge we had. From beginning to end, the Oracle and the Old Man had it all worked out between them; which made it all the more galling that we only found out what it
really
meant when it was too late for all of us.

But we’ll get to that soon enough.

‘Sticks and stones may break my bones’, as they say in the Middle Worlds, but with the right words you can build a world and make yourself the king of it. King, or even god – which brings us back to the Old Man; that master storyteller; keeper of runes; lord of poetry; scribe of First and Last Times. Creationists would have us believe that every word of his story is true. But ‘poetic licence’ was always the Old Man’s middle name. Of course, he has a lot of names. So do I. And because this isn’t
history
, but
mystery
–
my
story – let’s start with me for a change. Others have already had their chance to tell their version of events. This is mine.

I’m calling it
Lokabrenna
, or in rough translation,
the Gospel of Loki
. Loki, that’s me. Loki, the Light-Bringer, the misunderstood, the elusive, the handsome and modest hero of this particular tissue of lies. Take it with a pinch of salt, but it’s at least as true as the official version and, dare I say it, more entertaining. So far, history, such as it is, has cast me in a rather unflattering role. Now it’s my turn to take the stage. 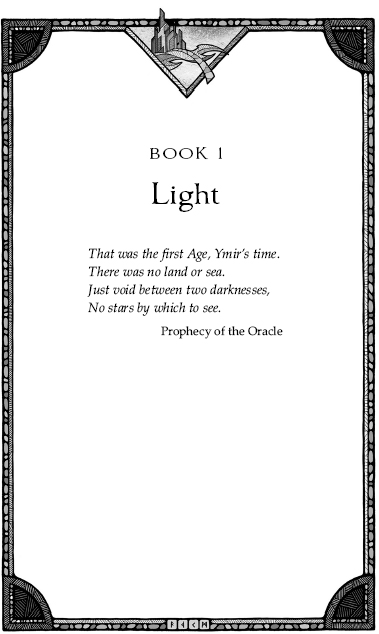 A
LL OF US CAME FROM FIRE AND ICE
. Chaos and Order. Light and dark. In the beginning – or back in the day – there was fire coming out of a hole in the ice, bringing disruption, turmoil and change. Change isn’t always comfortable, but it is a fact of life. And that’s where life as we know it began, as the fires of World Below pierced the ice of World Above.

Before that, there were no Middle Worlds. No gods, no Folk, no wildlife. There was only Order and Chaos then, pure and uncorrupted.

But neither Order nor Chaos is very hospitable. Perfect order is immovable; frozen, unchanging and sterile. Total Chaos is uncontrolled; volatile and destructive. The middle ground – basically, lukewarm water – created the perfect environment for another kind life to emerge among the frozen Wilderlands and volcanoes erupting under the ice.

The Authorized Version goes like this, supported by the Oracle. From the meeting of Order and Chaos there came a giant being called Ymir, the father of the Ice Folk, and a cow, Audhumla, which licked at the salt that was in the ice and brought out the first man, Buri. From this I think we can all
conclude that the cow was the primary instigator of everything that followed – war, Tribulation, the End of the Worlds. Lesson One: never trust a ruminant.

Now the sons of Buri and those of Ymir hated each other from the start, and it didn’t take long for them to go to war. Buri’s three grandsons, the sons of Bór – their names were Odin, Vili and Ve – finally killed old Ymir and made the Middle Worlds from what was left of him; the rocks from his bones; the earth from his flesh; the rivers from his steaming blood. His skull became the Firmament; his brains the clouds; his eyebrows the division between Inland and the Outlands.

Of course, there’s no way of proving this – let’s face it – rather unlikely hypothesis. All of the possible witnesses have disappeared, except for Odin, the Old Man, the only survivor of that war; architect and chronicler of what we now call the Elder Age and, as it happens, the only one (except for me) to have heard the fateful prophecy, delivered to him by Mimir’s Head when the Worlds were fresh and new.

Call me cynical if you like. But it all sounds a bit too convenient. The Authorized Version of events leaves out a number of details, which Creationists seem content to ignore. I personally have my doubts – not least about the giant cow – although even now you have to beware of how you express these sentiments. At one time, even to suggest that Odin’s account of things might have been metaphorical instead of literal would have resulted in cries of heresy and a good deal of personal discomfort for Yours Truly, which is why, even then, I was always careful to keep my scepticism to myself.

But that’s how religions and histories make their way into the world, not through battles and conquests, but through poems and kennings and songs, passed through generations and written down by scholars and scribes. And that’s how, five hundred years later or so, a new religion with its new god came to supplant us; not through war, but through books and stories and words.

After all, words are what remain when all the deeds have been done. Words can shatter faith; start a war; change the course of history. A story can make your heart beat faster; topple walls; scale mountains – hey, a story can even raise the dead. And that’s why the King of Stories ended up being King of the gods; because
writing
history and
making
history are only the breadth of a page apart.

Not that there was much of
that
when Odin was fighting the Ice Folk. There were no runes to write with then, and nothing but rock to write upon. But metaphor or otherwise, this is as much as I believe: that the world came into being through Change, which is the servant of Chaos; and only through Change has it endured. Much like Your Humble Narrator, in fact; adapting to suit the circumstance.

The snow hare changes its coat to white to go unseen in winter. The ash tree drops its leaves in the fall, better to survive the cold. All of life does the same – even gods – turning their coats to suit the turning seasons of the world. There should be a name for that kind of thing – in fact, it should be one of
my
names. Let’s call it
Revolution
.