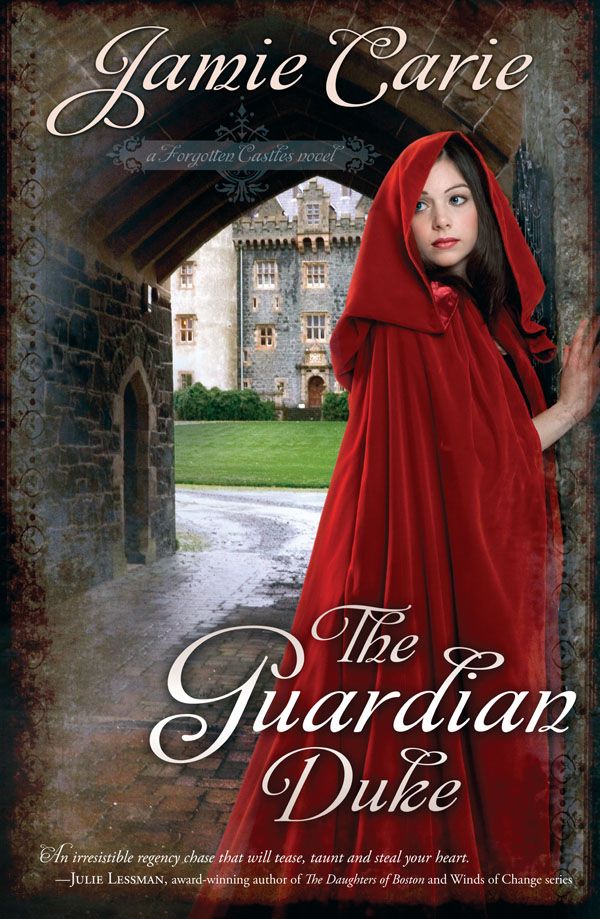 Publisher's Note: The characters and events in this book are fictional, and any resemblance to actual persons or events is coincidental.

Scripture quotations are taken from the King James Version.

To my son Seth,

This story is yours. You dreamed up the scenes and the characters with me. We spent hours talking about what these people were like and where they would go and all they would see and do. . . . It was our best adventure together, something I will cherish forever.

I love you so much! Your potential is vast, your heart is guarded in a wise way, and your spiritual being is splendor personified. You are a gift to the world and a son of God who will fulfill His purpose for all eternity. I am blessed to call you my son.

A special thank you to Clive Scoular of Killyleagh, County Down in Northern Ireland.

Your willingness to share your knowledge of Hans Sloane, Killyleagh Castle, and the picturesque village of Killyleagh made this story richer in authenticity and more vibrantly Irish.

I dream of seeing the Land of Ever Young myself one day, but for now I feel as if I have had the best virtual tour possible. I thank you, kind sir!

H
eaven could be found in music.

Gabriel Ravenwood, the Duke of St. Easton, closed his eyes and leaned his head onto the velvet cushion at his back. A small smile played across his lips as he felt each and every muscle in his face relax. Little by little he gave way, an internal shifting, a giving over to something greater than himself. Waves of baritone and mezzo-soprano wafted over him and around him and through him until the world—a dark and gray place before he stepped inside these doors—gave way to the sustaining notes of life in full color.

A deep breath and then utter peace. It wafted over him and through him. It undid him in a way that every other pursuit fell short. Music never fell short. Blessed resonance of relief. It was always thus, and why he'd spent every afternoon here for the past few years.

Thank God for it. Thank God there was still something.

He lifted his fingers to the bridge of his nose and squeezed.

Gabriel lifted his arm in a slight, relaxed motion, as if a fly would dare intrude on this time.
Go away. Everyone, just go away.

"Your Grace. I do apologize, but there is a matter—"

Gabriel turned his face away, still consumed by the aria, but he frowned. His piece of heaven was being pulled at, snagged, and punctured like a great air balloon. A roil of unease eked through his bubble of serenity.

"'Tis of the utmost importance, Your Grace. I've been trying to reach you."

The slight man who was his personal secretary paled white as the walls around them and took a step backward. He was holding a letter. It shook like a wind was blowing at it, though there was no wind. He held it out.

Gabriel took a deep breath and jerked his head toward the door to his private box. He might be disrupted, but he would not ruin the opera for the other twenty or so people in the audience.

Once in the long, red-carpeted hall, Gabriel took the letter and flipped it over.

A chill settled over him. Now it was a different matter altogether.

What could the prince regent want with him now? He glanced up at his secretary, who only shrugged with a nervous pinch to his mouth, and then carefully pried up the rose-colored wax.

A dull roar started in his ears as he unfolded the thick paper. He shook his head, trying to rid the sensation of water filling his ears, then looked back down at the rich vellum. Words shot out at him and then glanced away.
Lady Alexandria Featherstone . . . Holy Island . . . Northumberland . . . his ward . . . the Duke of St. Easton . . . relation . . .

He looked up, nonplussed. Featherstone? Must be a very distant relative indeed. He closed his eyes for a brief moment and shook his head as if he could shake the clogged feeling from his ears. He rubbed his hand over his eyes and looked back at the letter.
Missing parents . . . presumed dead . . . guardian . . . only heir . . . Alexandria . . .
A flash of bright light exploded inside his head.

The strange dizziness closed around him. He felt the paper, so fine and thick, crumple in his fist. He shook his head and looked over at his secretary.

His man leapt forward as he stumbled. Gabriel leaned to one side and covered his ears with his hands, trying to block the sudden screeching in his head.

God! Oh, God. What is happening to me?

He felt himself flail and fall.
Alex . . . an . . . dria . . .
He crashed to the floor, dizzy, the impact on his shoulder registering in waves of pain that reverberated from shoulder to head and back again. People rushed forward to crowd around him, looking at him with faces in varying degrees of shock and concern.

"Get back!" He barked, rising with an outstretched arm. At least he hoped he had said something; he really couldn't hear the words.

Abrupt dizziness forestalled his attempt to stand. He reached out for Meade's shoulder, right beside him, but couldn't focus on it long enough to grasp hold. "Meade, hold still, man."

Mr. Meade's lips moved but the roar in Gabriel's ears made it impossible to make out what he was saying. His knees buckled again and he went down, sprawled on the red runner. Fear swept through him in waves of agony from head to toe. Something was not right. He closed his eyes and took deep breaths, blocking everyone from his mind.

Alexandria Featherstone—
felt familiar somehow, and yet he'd never heard the name before, had he? Who the devil was she?
Alex
. . . It was his last coherent thought before the darkness swallowed him up.

GABRIEL WOKE IN HIS STATE bedchamber with his head resting comfortably on several fluffy feather pillows. He blinked, noticing the strange quiet in the place. Unease filled his throat as he lifted his head and turned it this way and that, trying to hear the usual bustling sounds of London outside his town house at number 31 St. James Square. Nothing. Complete silence.

"Meade?" His voice must be raspy, as he couldn't hear it. He cleared his throat and sat up, a slow action as though moving through water. "Meade," he pressed the word harder through his throat and from his lungs. Nothing. A chill started at the base of his skull and crept down his back. Swinging his legs over the side of the bed, he stood, threw back his head, and bellowed.

The door swung open and three men, one his pale-faced secretary, rushed toward him. Gabriel clenched his teeth and clung to the coverlet like a flapping rope. He glanced from face to face. Their mouths were moving in an irritating fashion.
Too fast. Slow down.
He barked out a word,
stop
, but they didn't stop. God help him, their mouths were moving but no sound came forth.

"Water." He stretched out his hand as one of the men, his doctor he now realized as Bentley's whiskered face came into focus, took him by the shoulder and motioned for him to get back into bed. He didn't want to go to bed. He didn't need to sleep. He wanted the panic that was constricting his throat to cease. He wanted to start the day over. To sit in the opera house and drown his ennui in the throes of a musical score. He wanted his brand of normal back, for heaven's sake—even if it was a shadow's life.

The doctor said something and patted the bed like he was speaking to a three-year-old refusing nap time instead of a thirty-two-year-old duke. Gabriel shook his head, much like a recalcitrant toddler. He wanted to ask what was wrong with him, but he couldn't let them know of such a weakness. And they certainly could never know this fear that was gripping him like a demon's crushing embrace.

Clearing his throat again and trying to see past the fog in his brain, he pulled himself together and stated in what he hoped was a normal tone. "A glass of water, Doctor. That's all I need."

The request was thrust into his hand by the third man, Lord Bartrom, his good friend and boyhood cohort for as long as he could remember. "Thanks, old boy." He nodded toward his blond pal with all the normalcy he could manage, then quickly looked away before his friend had a chance to speak and threw back the drink.

The doctor tapped him on one shoulder. He had such a look of pleading on his face and questioning, with those bushy gray eyebrows halfway up his forehead.

Gabriel blew out a harsh breath, narrowed his eyes, and stared at his lips. If he concentrated hard enough, he might be able to make out what he was saying.

Something about bed and exam, maybe? And then the old man pointed to his mouth and mouthed the words. "Can you hear me? Your Grace, can you hear what I'm saying?" He gestured words coming from his mouth.

The fear squeezed at him again, forcing him to sit down.

He blocked the new wave of fear with fierce determination. Dr. Bentley took a firm hold on Gabriel's chin and leaned toward his right ear. With his other hand he pulled out a fluted piece of metal and inserted it into his ear. Cold, foreign, uncomfortable. Gabriel closed his eyes and let out a breath of air as the instrument moved around inside his ear.

The doctor stepped to his other side, causing Gabriel to open his eyes. Without the use of sound, he found himself lost . . . drifting . . . terror-filled to be so unanchored. He glanced askance at the old doctor, a man he'd known since his first fever. Gabriel was the third son born to the Duke and Duchess of St. Easton. His two elder brothers, Robert and William, had died before their second birthdays, so if Gabriel so much as sneezed . . .

Well. He'd known this face peering into his face for a very long time. And it felt the same now, even though he'd reached the grand old age of thirty-two and had acquired the dukedom on his father's death not yet two years ago. Now he was the head of the family. Three sisters had followed him and survived, so his parents had finally settled down a bit and relaxed their tenuous hold on his exploits and boyish adventures. Gabriel looked sideways at the wiry hair of his protector as he maneuvered the earpiece and candle and remembered a particular time he'd escaped all their clutches with his sailboat,
Nap
. Short for Napoleon, of course.