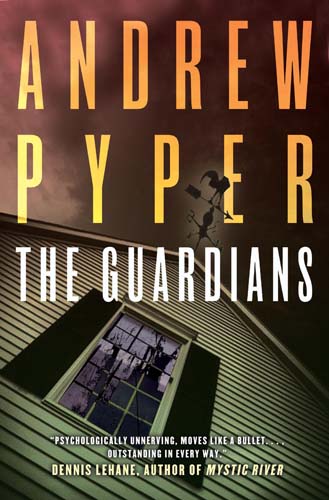 First published in Great Britain in 2011

an imprint of The Orion Publishing Group Ltd

The moral right of Andrew Pyper to be
identified as the

author of this work has been asserted in accordance
with

the Copyright,
Designs and Patents Act of 1988.

All rights reserved. No part of this
publication may be reproduced,

stored in a retrieval system, or transmitted in any
form or by any

without the prior
permission of both the copyright owner and the

above publisher of
this book.

All the characters in this book are
fictitious, and any resemblance to

A CIP catalogue record for this book

is available from the British Library.

The Orion Publishing Group's policy
is to use papers that are natural,

renewable and recyclable products and made from wood
grown in sustainable

forests. The logging
and manufacturing processes are expected to

conform to the
environmental regulations of the country of origin.

For my Guardians then—

And for my Guardians now—

We
watched them come.

A lone
police cruiser at first. The officer's shirt straining against the bulge around
his waist. A look of practised boredom on his face, a pantomime of seen-it-all
masculinity performed without an audience. We were the only ones who saw him
walk, pigeon-toed, into the house. The only ones who knew he wouldn't be bored
for long.

When
he came out he wasn't wearing his cap anymore. His thin hair, grey but darkened
with sweat, was a greasy sculpture of indecision, pointing in several
directions at once. (Later, we wondered about the cap. Had it fallen off in the
first jolt of shock? Had he removed it himself in a reflex of some sort? A show
of respect?)

He
tumbled into the car and radioed in. We tried to read his lips, but couldn't
really see his face through the willow boughs, swaying reflections over the
windshield. Was there a numbered code for this? Or was he forced to describe
what he'd seen? Did he recognize, even in the shadows that must have left him
blind after entering from the bright outside, who they were? However he put it,
it would have been hard for anyone to believe. We weren't wholly convinced
ourselves. And we knew it was true.

Soon,
two more cruisers pulled up. An ambulance. A fire truck, though there was no
fire. Some of the men went inside, but most did not. A scene of grimly
loitering uniforms, sipping coffee from the Styrofoam cups they brought with
them. The last of history's union-protected, on-the-job smokers flicking their
butts into the street in undeclared competition.

There
was nothing for most of them to do, but they stayed anyway. An only partly
hidden excitement in the way they scuffed their shoes over the cracked sidewalk
and rested their hands on their belts, knuckling the handles of holstered guns.
It was a small town. You didn't get this sort of thing too often. You didn't
get it ever.

We
stood together, watching. Unseen behind the curtains in the front room of the
McAuliffe house across the way. Our noses grazing the diaphanous material that
smelled of recently burned bacon and, deeper still, a succession of dinners
scooped out of the deep fryer. When the paramedics and bearded man in a suit
who must have been the coroner finally emerged from the house with the black
bags laid out on gurneys—one, and then the smaller other—we held our breaths. A
gulp of french fry, onion ring and chicken finger that, to this day, is the
taste of loss.

We
remember all this, though still not everything.

And
some of the things we remember may not have happened at all.

The
call comes in the middle of the night, as the worst sort do.

The
phone so close I can read the numbers on its green- glowing face, see the
swirled fingerprint I'd left on its message window. A simple matter of reaching
and grabbing. Yet I lie still. It is my motor-facility impairment (as one of my
fussily unhelpful physicians calls it) that pins me for eighteen rings before I
manage to hook the receiver onto my chest.

A
familiar voice, faintly slurred, helium-pitched between laughter and sobs.
Randy Toller. A friend since high school—a time that even Randy, on the phone,
calls "a million years ago." And though it was only twenty-four
years, his estimate feels more accurate.

As
Randy apologizes for waking me, and blathers on about how strange he feels
"doing this," I am trying to think of an understanding but firm way
of saying no when he finally gets around to asking for money. He has done it
before, following the unfairly lost auditions, the furniture-stealing
girlfriends, the vodka-smoothed rough patches of his past tough-luck decade.
But in the end Randy surprises me when he takes a rattling, effortful breath
and says, "Ben's dead, Trev."

This
is my first, not-quite-awake thought. Nobody's called me that since high
school,
including
Randy.

"Hanging.
I mean, he hung himself. In his mom's house."

"He
never went outside. Where else could he have done it?"

"I'm
saying he did it in his
room.
Up in the attic where he'd sit by the
window, you know, watching."

"It
was a kid walking by on the street. Looked up to see if that weird McAuliffe
guy was in the window as usual, and saw him swinging there."

I'm
quiet for a while after this. We both are. But there is our breath being traded
back and forth down the line. Reminders that we aren't alone in recalling the
details of Ben's room, a place we'd spent a quarter of our youth wasting our
time in. Of how it would have looked with the grown-up Ben in it, attached to
the oak beam that ran the length of the ceiling.

"Maybe
it's for the best," Randy says finally.

"Take
that stupid bullshit
back.''''

Randy
has led the kind of life that has made him used to apologizing for saying the
wrong thing, and the contrite tone he uses now is one I've heard after dozens
of defaulted IOUs and nights spent sleeping on my sofa between stints in rented
rooms. But then, in little more than a whisper, he says something else.

He's
right. It is sort of true that with the news of Ben McAuliffe's suicide there
came, among a hundred other reactions, a shameful twinge of relief.

Ben
was a friend of mine. Of ours. A best friend, though I hadn't seen him in
years, and spoke to him only slightly more often. It's because he stayed
behind, I suppose. In Grimshaw, our hometown, from which all of us but Ben had escaped
the first chance we had. Or maybe it's because he was sick. Mentally ill, as
even he called himself, though sarcastically, as if his mind was the
last
thing wrong with him. This would be over the phone, on the rare occasions I
called. (Each time I did his mother would answer, and when I told her it was me
calling her voice would rise an octave in the false hope that a good chat with
an old friend might lift the dark spell that had been cast on her son.) When we
spoke, neither Ben nor I pretended we would ever see each other again. We might
as well have been separated by an ocean, or an even greater barrier, as
impossible to cross as the chasm between planets, as death. I had made a
promise to never go back to Grimshaw, and Ben could never leave it. A pair of
traps we had set for ourselves.

Despite
this, we were still close. There was a love between us too. A sexless,
stillborn love, yet just as fierce as the other kinds. The common but largely
undocumented love between men who forged their friendship in late childhood.

But
this wasn't the thing that bridged the long absence that lay between our adult
lives. What connected Ben and me was a
secret. A whole
inbred family of secrets. Some of them so wilfully forgotten they were unknown
even to ourselves.

Only
after I've hung up do I notice that, for the entire time I was on the phone
with Randy, my hands were still. I didn't even have to concentrate on it, play
the increasingly unwinnable game of Mind Over Muscles.

Everything's
okay. Just stay where you are. Relax. Be still
.

Now,
in the orange dust of city light that sneaks through the blinds, I watch as the
tremor returns to my limbs. Delicate flutterings at first. Nervous and quick as
a sparrow dunking its head in a puddle. An index finger that abruptly stiffens,
points with alarm at the chair in the corner-—and then collapses, asleep. A
thumb standing in a Fonzie salute before turtling back inside a fist.

You
know what I need? A week in Bermuda
.

These
were the sort of thoughts I had when the twitches showed up.

The
hand-jerks and finger-flicks were just the normal flaws, the software glitches
the body has to work through when first booting up after a certain age. I had
just turned
forty,
after all. There was a price to be paid—a small,
concealable impediment to be endured for all the fun I'd had up until now. But
it was nothing to worry about. It wasn't a real problem of the kind suffered by
the wheelchaired souls you wish away from your line of sight in restaurants,
your appetite spoiled.