The Hadrian Enigma - A Forbidden History 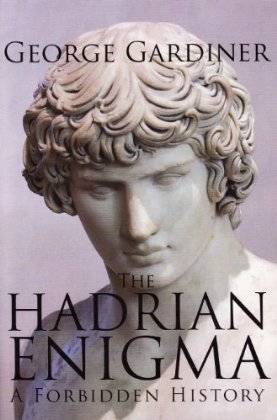 No part of this publication may be

reproduced, stored in a retrieval system, or transmitted

in any form or by any means, electronic, mechanical,

photocopying, recording or otherwise, without the prior

permission of the copyright owner.

Bust of Antinous, known as the Antinous of Ecouen.

Courtesy of the Louvre, Paris.

In memory of M.R.

THE HADRIAN ENIGMA – A Forbidden History
is fiction based upon an incident recorded by historians of the ancient world. It is a novel elaborating on the suspicious death of Antinous, the
favorite
of Caesar Hadrian, emperor of Rome, reported at the River Nile in Egypt in 130CE.

This novel’s events, cultural ambience, and characters reflect recorded history. Several characters and circumstances are entirely fictional. Background information and a bibliography are available at:-

“
.. the noble lover of beauty engages in love

wherever he sees excellence and splendid

natural endowment, without regard for

any difference in physiological detail.”

receive these spoils of a bear which

Hadrian killed on his horse and gives you,

and in return breathe soberly* on him

Dedication to Eros at Thespiai by the Emperor Hadrian, c.125CE

Stop now. Cease immediately. You are at risk. If you intend reading this history, take great care. Caesar will not be pleased. Hadrian may exile you to some bleak rocky outcrop dashed by stormy seas if he learns of it. Or worse. Reconsider while yet you may.

However, if juicy morsels of gossip have reached your ears and you cannot help yourself, then be it on your own head. You now share in my own plight.

This saga came to its climax three months ago. Its culmination struck Caesar’s traveling Household at the dawn of one of those bleached-out, white hot, stupefying days so common in Egypt. In the molten miasma of liquid heat that morning three months ago his Court’s communal bloodstream froze to ice, as they say.

An unexplained death at Court is a sobering matter. The death of a young, vital, handsome
favorite
augurs even greater concern. What is to be made of it, we wondered?

Three months later my anxiety escalates. My head is now forfeit. Hadrian does not forgive my revelations before his Court. They were truly embarrassing. His reputation for machismo as a Roman Imperator was exposed to view for what it really is. Yes, Caesar’s
loving
tenderness
was revealed. Tenderness is a sentiment an Imperator deems it unwise to disclose.

This is the path of my chronicle’s journey. By the grace of
Fortuna,
I hope these words will persuade Hadrian of the integrity of my actions that fateful day. May they fix my head more securely to my body.

Greetings dear reader, whoever you may be.

Your writer is Gaius Suetonius Tranquillus, renowned lawyer and alleged playboy of Rome. ‘Alleged’ because all Rome assumes I have been notably successful in a Roman male’s obligatory career of lively
priapic
endeavor.

However in this thirteenth year of Caesar’s rule I will have seen a full sixty winters. This means I am six years older than Hadrian. Being no spring chicken, my alleged priapic activities wane alarmingly.

My
patron
and friend of the past twenty years, Gaius Septicius Clarus, the well-known senator and one-time Prefect of the Praetorian Guard, has kindly assigned me a suite at his luxurious villa at Alexandria. Here on Caesar’s behalf I am under house arrest until Hadrian decides what to do with me. As a member of the
eques
class at least I know what my worst fate may be – a swift beheading or permission to suicide somewhat less messily.

In the meantime I gather my thoughts onto paper about the recent journey through Egypt. These thoughts will either save my neck or make it even less secure. While the memory remains fresh I must record the fate and subsequent
apotheosis
of the young man at the center of its most disturbing event, Antinous of Bithynia. To some he was Caesar’s beloved companion and
Favorite
; to others a mere catamite, a toyboy, a typical Greek hustler on the make.

I have written several admired histories for the Empire’s book copiers and their readers. I am best known for my
Lives of the Caesars
. Perhaps you too know of it? There I show in eight scrolls all I have learned of our first Caesar, Julius, and the following eleven Caesars from Augustus to Domitian. That last monster ruled in my youth at much cost to the lives of members of my family.

In my
Lives
I

tried to tell of Rome’s rulers as they truly were. It has not always been a pretty picture, dear reader, but as you may perceive, I am up to the chore. I leave no unsavory stone unturned, no scandal unexplored. If a Caesar proved to be boring, I might even invent a little.

Thirteen years ago on Hadrian’s succession to the role of
Princeps
he appointed Septicius to be his Prefect of the Praetorian Guard. I was then appointed to be the Director of imperial correspondence. For five years I was active at the very center of imperial affairs. No letter, official document, edict, or warrant in Latin or Greek went to the far reaches of the Empire without my oversight.

After some time Hadrian’s wife, Vibia Sabina
the Augusta
, declared Septicius and I to have insulted her. Sabina is a strong-willed woman, so she cleverly engineered a charge of
laesa majestas
against us and our subsequent dismissal. Hadrian was obliged to agree with his wife’s claim for public form’s sake.

It’s well known no love is lost between the Imperial couple. Nevertheless both show proper conformity to their marital obligations. After all, he is our
Princeps
, the First Citizen, who leads us all by example.

Hadrian leads in most things except perhaps in the matter of whelping progeny to populate the Empire or stock the Legions with fighting sons. He and Sabina have bred no children.

Hadrian wed his arranged bride at the usual age when he was twenty-five. As usual, Sabina was thirteen. They do not sleep together. I doubt they have much in common other than their unlikely coupling by the strategies of the imperial succession.

She has been heard to say her husband is a monster!, though she never defines her meaning. She swears she will never bear him a son. And she hasn’t. Nevertheless despite their mutual antagonism the two maintain a prudent public comportment as the
Princeps
and his respectful wife. They are role models for all Romans.

My books of
Lives of the Caesars
focused upon the acquisition of power by the emperors, their uses of that power, and their abuses of power. Of the first twelve Caesars I revealed how only Julius and three of the remaining eleven retained their moral authority.

The remote province of Bithynia has been a prominent source of this inventiveness. Earlier when I was secretary for two years to Rome’s ambassador at this backwoods colony on the edge of the Black Sea, I experienced its wild, exotic culture at close hand.

Bithynia seems a place before memory; a place intoxicated with time’s open endlessness. Antique gods, demons, nymphs, or sprites of the forests, waters, skies or inner perceptions seem close to us at Bithynia. They challenge our very sanity. Sacred rites and holy oaths are essential to placate their feverish spirits. Strange, crude, brutal superstitions are veiled behind the token adoration of our sacred Pantheon
or the honoring of our Deified Emperors.

Male and female categories too become malleable, diaphanous, interchangeable, obverse sides of the same coin. In this heady climate the portals of license open wide. Vistas of voluptuous sensuality arise before us. Bithynia disturbs, shocks, and thrills simultaneously.

As you well know, a Roman male’s function is to subjugate, dominate, and penetrate. This has always been the victorious Roman way. Romans conquer and subdue compelled by their driven virility. Manhood is defined by the right to have sex – that is, to dominate and penetrate, or in earthier terms, to fuck, if you forgive honest Latin - whether it’s with a woman or a man, a mature youth, a slave, an enemy, or a business opponent, though perhaps reluctantly metaphorically in the latter. Some say we Romans have an unimaginative sexual agenda. Others say we are immoral, wanton, crude fornicators.

Subjugation and domination are perceived to be a Roman male’s purpose in life. The way of the
phallus
rules. This is our ancient heritage, we proclaim. We despise intimate emotion. It is a sign of weakness. Only the meek, slaves, losers, and girls succumb to such defects. They are to be pitied.

Yet there are times when even I seriously wonder about this?

However in Bithynia, perversely, it is the giving and receiving of pleasure which rules. To this rustic breed pleasure is a two-way exchange at minimum, or every-which-way when inclined. Sex is a leisure activity, play, a game, recreation, an exercise in indulgence, a mode of
luxury.

Those ancient rulers of Bithynia, the dynasty of her four opulent Nikomedes kings, were lauded across the Middle Sea as dissolute practitioners of this quality of
luxury
. Since Rome’s annexation of the province our virile Roman tastes have been infiltrating this Dionysian culture very slowly indeed, if at all.

To Bithynia’s social elites sexual appeal is focused upon the
beauty
of the object, a person’s visual or moral attraction. This aesthetic ignores class, status, or even gender. The Bithynians are famously gender blind. Human beauty is praised, wooed, and hopefully consummated, regardless of the vehicle.

A century ago that last of the Bithynian kings, the notoriously bawdy Nikomedes IV, happily satisfied this racy itch while entertaining a visiting Roman ambassador. The ambassador was the nineteen year-old Julius Caesar. It seems our handsome future triumphant Roman victor of wars was introduced very personally, very intimately indeed, to the Bithynian mode of
luxury
. Consequently, his Legions later regaled the founder of the dynasty of the Caesars as being “
every woman’s husband and every man’s wife
’.