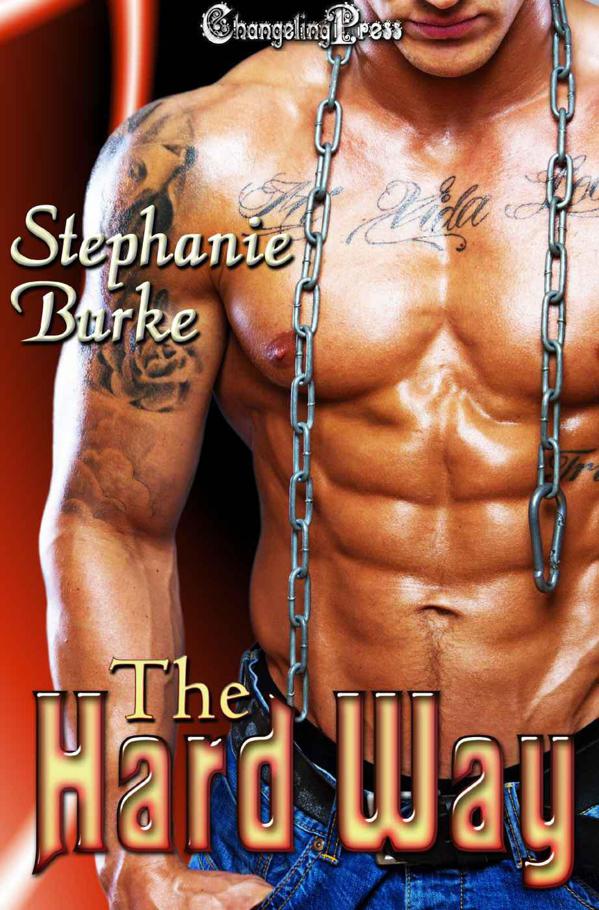 This e-book file contains sexually explicit scenes and adult language which some may find offensive and which is not appropriate for a young audience. Changeling Press E-Books are for sale to adults, only, as defined by the laws of the country in which you made your purchase. Please store your files wisely, where they cannot be accessed by under-aged readers.

Payment of the download fee for this book grants the purchaser the right to download and read this file, and to maintain private backup copies of the file for the purchaser’s personal use only.

The unauthorized reproduction or distribution of this or any copyrighted work is illegal. Authors are paid on a per-purchase basis. Any use of this file beyond the rights stated above constitutes theft of the author’s earnings. File sharing is an international crime, prosecuted by the United States Department of Justice, Division of Cyber Crimes, in partnership with Interpol. Criminal copyright infringement, including infringement without monetary gain, is punishable by seizure of computers, up to five years in federal prison and a fine of $250,000 per reported instance.

A Man Called Lust: Sinopee doesn't want to lose her lover, but how can she stay when it may mean both their deaths?

Three the Hard Way: Perfect submission was never this hard… or this good.

Still Waters (13th Floor): She challenged his ideals and his body. But is it enough to escape the 13th Floor?

The Sincubus (13th Floor): When worlds collide and ideas change, anything can happen… on the 13th floor.

I am trapped in a colorless world,

One of many mindless drones,

Living an existence filled with drudgery and loneliness.

My only hope, the one thing that holds my sanity.

Escape through the mirror.

My one true lover,

Separated through time and space itself.

Vibrant and joyful, beautiful to hold.

Everything that I am not.

So when our shared world is threatened,

I will do what I must to protect it!

Now, only if we can do it in time,

before I am trapped in a hell between worlds.

But I will risk it.

I will do anything to protect the paradise

I will protect him…

Hold these close to your heart,

So that you will never forget me.

Our time is short!

We are blessed with such a short time.

Yet I know that this one day

This one day eternal

Will sustain me for the year.

For if they discover our secrets

Those secrets will destroy us.

-- A letter from the box

Trembling, I reached inside and let my hands gently caress the aged parchment paper. My heart pounded in my chest as I felt each bump and ridge of the old papers, felt the emotion that permeated each thin sheet.

The appointed hour was almost here.

I stared intently into the mirror that sat on my dresser and again saw nothing special, nothing unique, and nothing that I could figure would make me the recipient of such a wondrous gift.

I wondered what my parents were thinking when they made me, plain old me, guardian of their secret treasures, the letter and the carved wooden box.

But I blessed them, wherever they were, for the duty that had become a gift of immeasurable delight.

From the moment I’d received it so long ago, it had changed my life.

As the clock struck midnight on this night of all nights, I felt my pulse quicken and my eyes flash.

It was time… time to greet my love.

Large lavender eyes blinked owlishly at me, before the mist began to fade. As I watched, a slender, almost delicate hand pressed against some invisible barrier, leaned against it and, without a sound, forced its way through.

“My love,” the reed-thin tinkling voice, distorted by distance and space, whispered as the hand beckoned me to follow.

My heart racing in anticipation, I eased the lid closed on the letters and placed my hand in his.

For a time, I would be free, I would be with him, and this yearly blessing allowed me to stay sane, to survive another year here.

If you are followed, disaster will surely befall us!

Together, we will defy those who would separate us

Those who are against us.

But as I stare into this mirror,

At my reflection, know this.

And I love you, forever.

--A letter to my love; from the letterbox

As always, I first felt a chill as I pressed one hand against the glass.

The mirror was all the vanity that I have left. All of my femininity, the only thing of beauty that I own. And as I leaned against its familiar chill, I again prayed that this time I would find a way to stay.

The hand I held was warm, pulsing with light, almost hot to the touch. And he was mine.

Pressing harder, I began to feel the barrier of glass, like some thick gel, part for me. Its coolness eased past my face, making my nose itch as I began to force my way through. That warm hand was a beacon urging me to move faster. I closed my eyes and my body tingled as my face began to pass through.

This was always the hardest part, the face. Even the popping of my ears never sent a shiver up my spine as the coolness of magic and time slipping by, as if it would rip me back or toss me into an eternity lost in a void of darkness. I never watched. Once I had opened my eyes and was almost thrust into shock as the colors filtered and danced before my eyes. They surrounded me like they knew I was something that didn’t belong.

But as soon as I felt the coolness on my neck, the hand that still held mine gave a tug, and almost like a pea popping from a pod, I was forced through. I was free of the mirror and once again, I faced my love, my life, my air, my reason for being.

“Sinopee,” he said as I threw myself into his arms. His voice was as raspy and deep as I remembered.

“Lust,” I breathed into his chest, inhaling the rich scent of him, almost tasting him as I lost myself in his touch.

His name was Luster, but I called him Lust. And oh, how he sparked and shone in the sunlight.

His large, almond-shaped, lavender eyes perfectly matched his hair, which was so silver it sparkled. The long mane hung to below his buttocks and shimmered with his every movement. His skin, so pale and delicate in appearance, gave him an elf-like quality, an illusion supported by his set of high, pointed ears. But that was all that was fae about Luster.

He was over six feet of strong, muscled warrior. The sword that hung at his back was no mere ornament. I had seen him practice with the sharp blade, and he could do serious damage when he wanted.

As always when he greeted me, he was dressed only in tight black leather pants and knee-high boots. The silver ring in his left nipple glistened, as did his hair, as did his whole body. On his wrists was a set of huge, black braces, tooled with the name of his clan and the land that he was born to control, but was denied… by them.

“You have come back to me.” His hands, those warm, work-hardened hands, caressed my face as he lifted my head to meet his gaze.

“I will always come back to you. You are my life.”

“I am your fuck toy and you know it.” His rumbling laughter belied any seriousness in his tone.

“And I only have a day, so let’s get to it!” I playfully demanded.

“Commanding creature,” he hissed, tangling his hands in my thick hair. “Do you not know who you order about?”

“Yes, my fuck toy, and the best fuck toy I ever happened to own.”

“Own? Me? Great warrior that I am? It is you who are my object. And it is you who will find herself in serious trouble if you do not give me the respect I deserve.”

One would almost think he was serious, if it were not for the laughter sparkling in his eyes.

He threw his head back, roaring with laughter, this merry sound carrying over the lush green grasses and tall trees that I would have never experienced had he not performed the sacred ritual that drew me, through the words in the letters, through the mirror.

“I have missed you, Sinopee.”

“And I you, Lust,” I replied, tears welling up in my eyes against my will.

“None of that! You have time for tears after the mirror draws you back. For now, I intend to enjoy what I have missed during your long absence.”

“No relief?” I teased as he took the wooden box with the letters and placed them in a pouch at his side.

He said nothing, but took my hand and began to lead me to where he had set up a camp.

“Only my left hand,” he sighed mournfully. “You know I am connected to you. I could never derive any pleasure from the act if I were with another woman.”

“Lucky me!” I giggled as he led me to his tent.

Large, black, and made of some silky material, Lust’s tent was filled with lush carpets and huge pillows. It resembled some desert pasha’s harem from Old Earth.

“Is this how a rebel leader lives now?” I teased.

“Only for you, only on this day,” he replied, serious as he eased me inside and lowered the flap.

“And if they attack?”

“Glow and Glimmer will alert us. We are alone, but never totally alone.”

I looked up at him. Even in the dim light of the tent, he sparkled and shone with an inner light, an energy that I had never experienced before.

As I watched, he reached out one hand and gently caressed my face.

He pulled me closer, and his hands began to explore my features, one by one, memorizing them for the long separation we faced after this day. His pupils, black islands on seas of purple, dilated and became hazy. His nostrils flared as his skin began to heat, to burn.

“I want you,” he breathed, pulling me close to his hardening body. A noticeable bulge grew in the confines of the supple leather, taunting me with its hidden secrets.