The Haunting of Sunshine Girl 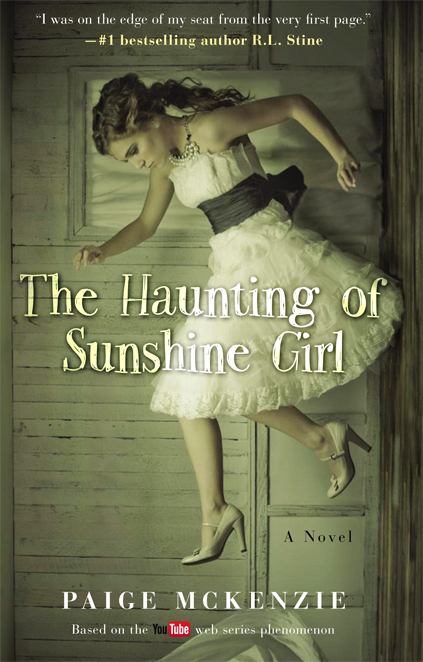 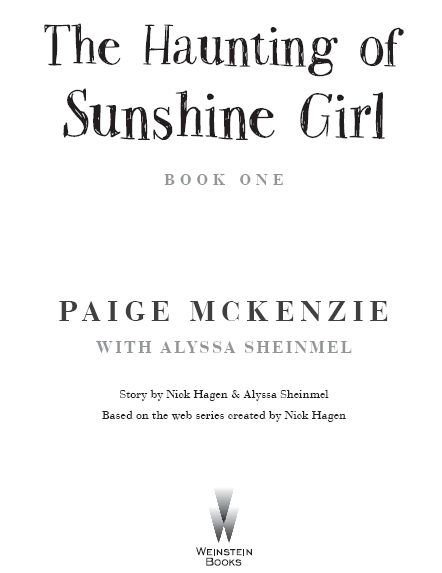 All rights reserved. No part of this book may be used or reproduced in any manner whatsoever without the written permission of the Publisher. For information address Weinstein Books, 250 West 57th Street, 15th Floor, New York, NY 10107.

Library of Congress Cataloging-in-Publication Data is available for this book.

A member of the Perseus Books Group

This book is dedicated to Sunshiners everywhere.

Whether you've been there since the beginning or you're new to the club, thisâand every Sunshine bookâis for you.

CHAPTER SEVEN: The Morning After

CHAPTER THIRTEEN: The Slip of a Knife

CHAPTER FIFTEEN: Out of Ridgemont and into the Fire?

She Is Getting Closer

CHAPTER NINETEEN: Caught in a Web

CHAPTER TWENTY-TWO: What Are We Fighting For?

I watched it happen. Katherine, the woman who adopted her, baked her a cake: carrot cake, a burnt sort of orange color with white frosting smothered over the top of it. A girl named Ashley came over to her house with candles, which they lit despite the sweltering Texas heat. Then they sangâHappy Birthday to you, Happy Birthday to you. Our kind don't celebrate birthdays. Except, of course, for when one of us turns sixteen. Just as she did today.

At precisely the time of her birthâ7:12 p.m., Central Standard Time, August 14âI sensed the change in the girl named Sunshine. I felt it the instant the spirit touched her. Katherine had just set the cake down on the table in front of her: sixteenâno, seventeen . . . why seventeen?âcandles. Sunshine grinned and pursed her lips, preparing to extinguish the flames. But then an instant of hesitation, the smile disappearing from her eyes.

Of course, she hadn't a clue what she was feeling or why she was feeling it. The moment the spirit touched her, her temperature dropped from 98.6 degrees Fahrenheit to 92.3; her heart rate jumped from 80 beats per minute to 110. She pressed her palm to her forehead like a mother checking for a fever. Perhaps she thought she was coming down with something: a
cold, the fluâwhatever it is that people suffer from. I recognized the culprit immediately: a twenty-nine-year-old male who'd perished in a car accident less than a mile away several weeks earlier, the blood on his wounds still fresh, the glass from the windshield still embedded in his face. Later, I would help him move on myself: his wounds will heal, his skin will be smooth. But for now I keep my focus on Sunshine.

I counted the seconds until her heart rate returned to normal: eleven. Impressive.

She took a deep breath and blew out her candles. Katherine and Ashley applauded. Sunshine stood up from the table and curtsied elaborately, garnering more applause. Her smile was back, planted firmly on her face, her bright green eyes sparkling. Almost as though she never felt anything at all.

My last student's temperature took twenty-four hours to rebound. But Sunshine's was back to normal by the time her mother cut the cake.

Of course, this was just a passing spirit. Soon she'd have to contend with so much more.

“Mom, the house is creepy.”
We're only halfway up the gravel driveway to our new home, and I can already tell. Even the driveway is creepy: long and narrow, with tall bushes on either side so I can't see our neighbors' front yards.

“I prefer creeptastic,” Mom answers with a smile. I don't smile back. “Oh come on,” she groans. “I don't even get a sympathy laugh?”

“Not this time,” I say, shaking my head.

Mom rented the house off of Craigslist. She didn't have time to be picky, not once she got offered the job as the head nurse of the new neonatal unit at Ridgemont Hospital. She barely had time to ask her only daughter how she felt about being uprooted from the town she'd lived in her whole life to the northwest corner of the country, where it rains more often than not. Of course, I said I'd support her no matter what. It was a great opportunity for her, and I didn't want to be the reason she didn't
take it. I'm just not sure that moving from Texas to Washington State is all that great an opportunity for
me
.

Mom parks the car and eyes the house through the windshield. Two stories high, a front porch with an ancient-looking porch swing that looks like it couldn't support a baby's weight. In the pictures online the house looked white, but in real life it's gray, except for the front door, which someone decided to paint bright red. Maybe they thought the contrast would look cheerful or something.

“You can't tell a house is creepy from the outside,” Mom adds hopefully.

“The same way I can tell that those jeans you bought before we left Austin will end up hanging in my closet instead of yours. I'm very, very intuitive.”

Mom laughs. Our little white dog, Oscar, whines from the backseat, begging to be let out so he can explore his new home. As soon as Mom unlatches her seat belt and opens the door, he bounds outside. I stay in the car a second longer, breathing in the wet air blowing in.

It's not just the house. Ever since we crossed the state line the world has been gray, shrouded in fog so thick that Mom had to turn the headlights on even though it was the middle of the day. I didn't picture our new life in Washington as quite so colorless. To be honest, I didn't picture it much at all. Instead, I kind of pretended the move wasn't happening, even as our house back in Austin filled with boxes, even when my best friend, Ashley, came over to help us pack. It wasn't until we were actually on the road that I really
believed
we were moving.

Our new house is on a dead-end street backed up against an enormous, fog-drenched field. Each of the houses we passed before we turned into our driveway was about two sizes too small for the size of its yard; I guess these are the kind of neighbors who want nothing to do with one another. There wasn't a single kid playing in his front yard, not a single dad getting ready to barbeque tonight's dinner, and the street was littered with pine needles from the towering Douglas firs that block out any semblance of daylight. An ugly, rusted, chain-link fence wraps around our new yard.

Judging from the little I've seen so far, I'm pretty sure the whole flippin' town of Ridgemont, Washington, is creepy. I mean, what could be creepier than a place at the foot of a mountain, where the sky is gray even in the dog days of summer? And if it seems like I'm overusing the word creepy, it's not because I don't have access to a thesaurus like everyone else with a smartphone; it's because there is simply no other word that will do.

I shake myself like Oscar does after his bath. It's not like me to be so negative, and I'm determined to snap out of it. I take a deep breath and open the car door. The house is probably adorable on the inside. Mom wouldn't have rented a place that didn't have some redeeming qualities. I reach into the backseat and grab the crate that holds our cat, Lex Luthor. Then I take out my phone and hold it up, taking a picture of me, Lex, and the house in the background, and I text it to Ashley. We promised each other we wouldn't grow apart, even with me living up here in Washington and her back in Texas. I mean, we've been best friends since second grade. If our friendship could survive the middle school cliquey-ness it faced a few years ago, I'm pretty sure it can survive a few thousand miles.