Read The Heart Has Its Reasons Online

The Heart Has Its Reasons 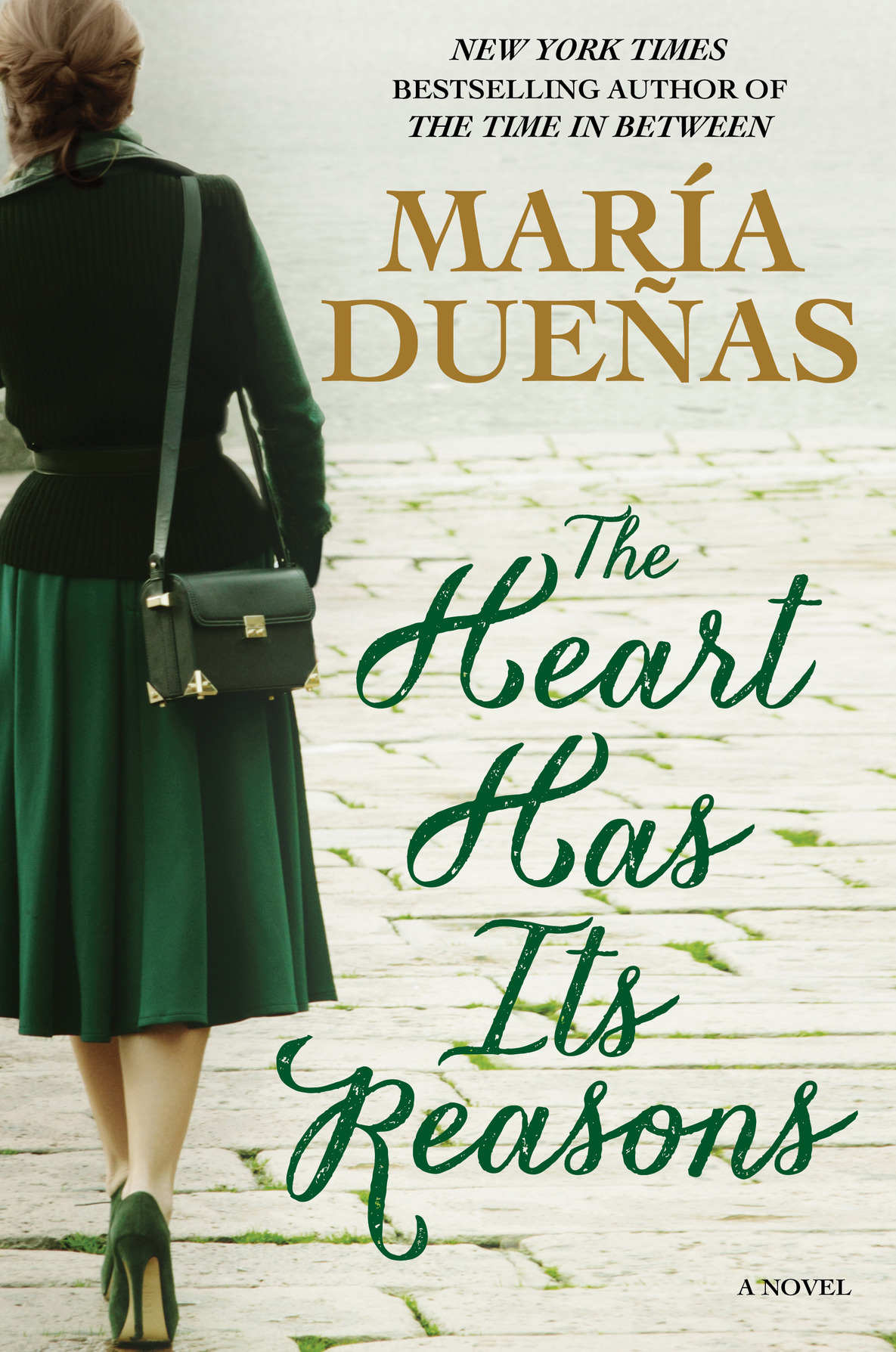 Thank you for downloading this Atria Books eBook.

Sign up for our newsletter and receive special offers, access to bonus content, and info on the latest new releases and other great eBooks from Atria Books and Simon & Schuster. 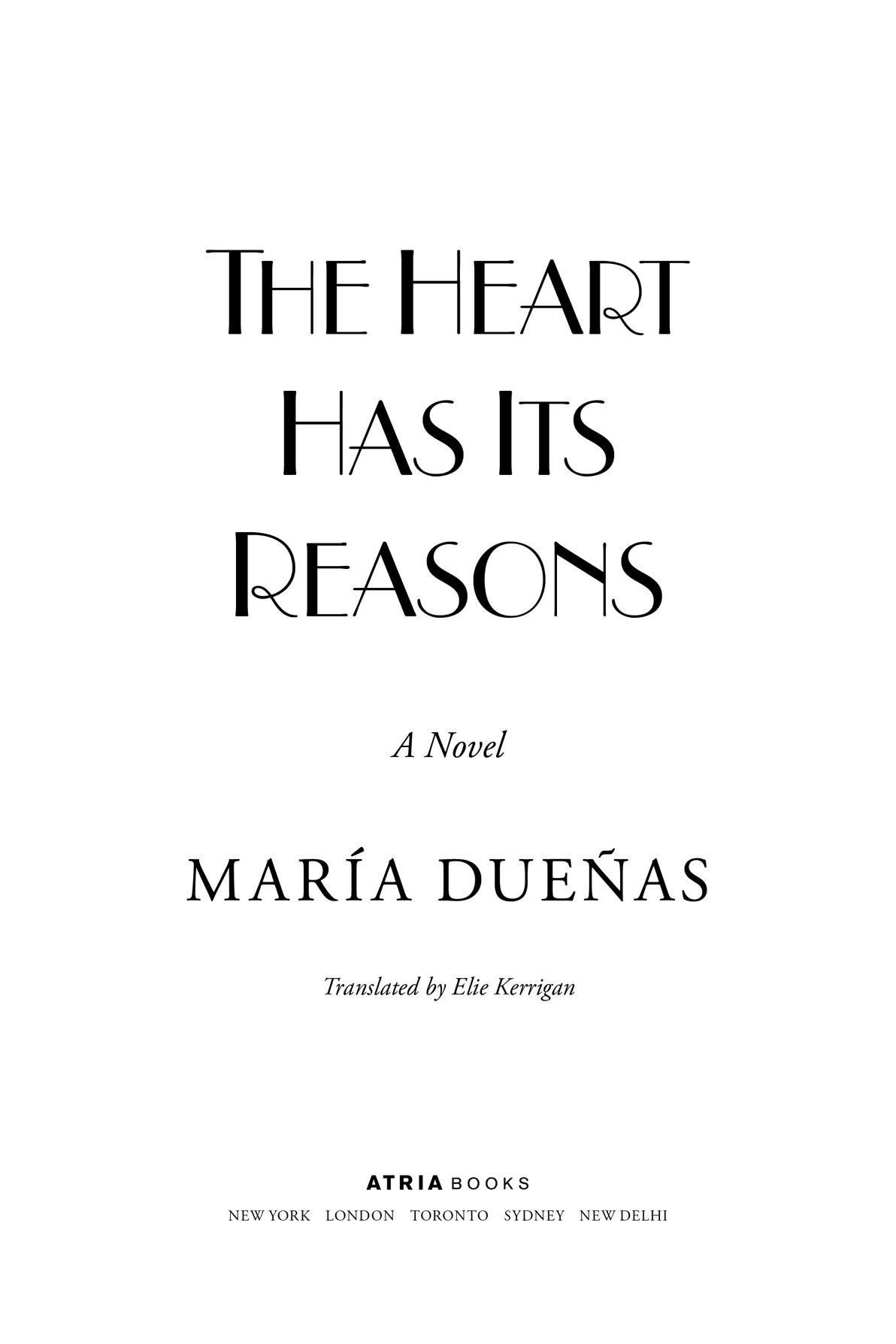 To those who, against all odds, teach every day with passion andÂ dedication: my colleagues, my teachers, my friends.

S
ometimes life comes crashing down, heavy and cold as a deadweight.

This is how I felt on opening the office door. It had all felt so cozy, so intimate, so mine. Before.

And yet to the naked eye there was no reason for apprehension; everything remained just as I had left it. Shelves crammed with books, bulletin board full of schedules and reminders. Folders, filing cabinets, old playbills, envelopes addressed to me. The calendar frozen two months back, July 1999. Everything stood intact in that space which for fourteen years had been my haven, where semester after semester I'd welcomed countless students lost in doubt or searching for something. The only thing that had changed were the props that supported me. Shattered.

Several minutes went by, perhaps even ten. Sufficient time, in any event, for me to come to a decision. My first order of business was to dial a telephone number. In reply I only got the icy courtesy of a voice mail. Hesitating whether or not to hang up, I decided to leave a message.

“Rosalia, it's Blanca Perea. I have to get out of here, I need your help. I don't know where I could go; it's all the same to me. Somewhere
I don't know a soul and no one knows me. I realize it's the worst timing, with the semester about to begin, but call me as soon as you can, please.”

I felt better after leaving the message. I knew I could trust Rosalia Martin, both her understanding and her goodwill. We had known each other since our early days at the university, when I was a young professor with a meager temporary contract and she was responsible for running a recently established department of international relations. Although our friendship had diluted somewhat with the passing of time, I knew Rosalia's mettle and was sure that my cry for help would be answered.

Only after the phone call could I muster enough energy to face my duties. My e-mail in-box opened like an overflowing dam of messages, and I dove into its current for a good while, answering some and discarding others that were outdated or of no import. Until the telephone interrupted me, and I answered with a curt “YesÂ .Â .Â . ?”

“What's the matter with you, madwoman? Where do you want to go at this point? And what's with all the rush?”

Rosalia's impassioned voice brought back the memories of so many shared experiences. Hours on end sitting in front of the black-and-white screen of a prehistoric computer. Shared visits to foreign universities in search of exchange programs and partnerships, double rooms in nonÂ­descript hotels, dawns spent waiting in empty airports. With the passage of time we'd gone our separate ways, but the traces of an old complicity remained alive, and that is why I told her everything. Without reservation, with brutal honesty.

In a couple of minutes she knew all she needed to know. That Alberto had left me. That the assumed solidity of my marriage had vanished during the first days of summer; that my kids had already flown the nest; that I'd spent the last couple of months awkwardly trying to adjust to my new reality. And that now, facing the new semester, I lacked the stamina to stay afloat in the setting I'd lived comfortably in for years, simply latching onto my responsibilities and routines as if my life hadn't undergone a swift sure gash like a knife through flesh.

With a dose of pragmatism equal to her body's considerable size,
Rosalia immediately absorbed the situation and realized that the last thing I needed was well-meaning sugarcoated advice. So she did not delve into details or offer me her soft shoulder as solace. She only made a comment that, as I might have expected, bordered on bluntness.

“Well, I'm afraid it won't be that easy for us, honey.” She spoke in the plural, immediately taking on the matter as something we were in together. “The deadlines for interesting things passed months ago,” she added, “and the next fellowship application deadlines are still some months away. But the semester is just beginning, and I don't know if we've received anything new in the last couple of weeks. Give me until the end of the day to see if I can come up with something.”

I spent the rest of the morning wandering around the university. I took care of pending paperwork, returned books to the library, and had coffee afterwards. Nothing sufficient to distract me while waiting for Rosalia's call. I was overanxious and lacked confidence. At a quarter to two I rapped on her office door, which was ajar. Inside, serene as always, and with violet-tinted hair, Rosalia was busy at work.

“I was just about to call you,” she announced, without even giving me time to greet her. Pointing to the computer screen, she proceeded to reel off what she'd found. “Three things came in during the holidays. They're not that badâmore than I expected, to tell you the truth. Three universities and three different activities. Lithuania, Portugal, and the United States. California, specifically. None are cushy jobs, mind you, and they all promise to work your ass off without contributing much to your curriculum vitae, but it's better than nothing, right? Where would you like me to start?”

I shrugged, pursing my lips slightly to stifle a smile: this was my first glimpse of optimism in a long time. In the meantime, Rosalia adjusted her chewing-gum-green glasses and redirected her gaze to the computer, scrutinizing its contents.

“Lithuania, for instance. They're looking for specialists in linguistic pedagogy for a new teacher training program. Two months. They have a European Union subsidy, which requires an international group. And this is in your line of work, right?”

Indeed it was. Applied linguistics, language pedagogy, curriculum
design. I'd been treading that path for the last two decades of my life. But before succumbing to the first siren's song, I chose to inquire a bit further.

“University of Espirito Santo, in Sintra. Private, modern, loaded. They've put together a master's program in teaching Spanish as a foreign language, and are looking for experts in methodology. The deadline is this Fridayâin other words now. A twelve-week intensive course, with enough teaching hours to choke a horse. The salary isn't too bad, so I imagine they must have loads of applications. But in your favor you have all those years of slogging away, and we've got a wonderful relationship with Espirito Santo, so it might not be too hard for us to get it.”

That offer seemed infinitely more tempting than the Lithuanian one. Sintra, with its forests and palaces, so close to Lisbon, and yet near to home. Rosalia's voice brought me out of my reverie.

“And lastly, California,” she resumed, without ungluing her eyes from the screen. “I see this possibility as more iffy, but we can take a look at it, just in case. University of Santa Cecilia, north of San Francisco. The information we have is rather scant right now: the proposal has just come in and I haven't had time to ask for more. At first glance, it seems like a grant financed by a private foundation, although the work will be carried out on campus. The endowment offered is nothing to write home about, but you'd be able to survive.”

“What does the work consist of, basically?”

“It has something to do with the compilation and classification of documents, and they're looking for someone of Spanish nationality with a PhD in any area of the humanities.” Removing her glasses, she added: “Normally this type of grant goes to people with a lower professional standing than you, so you'd certainly stand out from the rest when it comes to evaluating the candidates. And California, dear, is a real temptation, so, if you wish, I can try to get further information.”

“Sintra,” I insisted, refusing the third offer. Twelve weeks. Perhaps enough time for my wounds to stop stinging. Far enough away to
distance me from my immediate reality, close enough for me to return frequently in the event that my situation resolved itself suddenly and everything returned to normal. “Sintra sounds perfect,” I stated categorically.

Half an hour later I left Rosalia's office, the electronic application sent. I had a thousand details in my head, a handful of papers in my hand, and the feeling that perhaps luck, in a haphazard fashion, had finally decided to take my side.

The rest of the day went by in a sort of limbo. I ate a grilled vegetable sandwich, without much appetite, in the faculty cafeteria and went on working distractedly all afternoon. At seven I attended the presentation of a new book by a colleague in the Ancient History Department. I tried to get away as soon as it was over, but afterwards a few colleagues dragged me with them in search of a cold beer and I didn't have the strength to decline. It was close to ten when I finally reached home. In the semidarkness before I turned on the light I could see the answering machine blinking insistently in the far corner of the living room. Then I remembered that I'd turned my cell phone off when the presentation began and had forgotten to switch it back on.

The first message was from Pablo, my younger son. Charming, incoherent, and vague, with loud music and laughter in the background. I had difficulty understanding his rushed words.

“Pablo,” I whispered, pausing the machine to search for his face amid the bookshelves. There it was, photographed a dozen times. Sometimes alone but almost always with his older brother, so alike the two of them. The eternal smiles, the black bangs covering the eyes. Rowdy sequences from their twenty-two and twenty-three years of life. Indians, pirates, and Flintstones in school plays, blowing out an ever-increasing number of candles on cakes. Summer camps, Christmas scenes. Fragments printed on Kodak paper, memory cutouts of a close-knit family that, as such, no longer existed.

With my son Pablo still lingering in my mind, I pressed the Play button to listen to the next message.

My husband's blundering voice left me restless. Or rather, my ex-husband's. I was clueless as to what he wanted to tell me, but from his tone I hardly expected good news. My first reaction was, as usual, to think that something must have happened to one of my kids. From the previous message I knew that Pablo was fine; I then quickly rescued the cell phone from my bag, switched it on, and called David.

“Are you okay?” I inquired impatiently as soon as I heard his voice.

He sounded tense. Perhaps it was only a false perception due to the phone connection. Perhaps not.

“I know,” he interrupted me. “He just called me too. How did you take it?”

“The one he's going to have with Eva.”

Without the power of thought or sight, impenetrable as a marble mausoleum or a sidewalk curb, I remained suspended in a void for an indeterminate time. When I was again conscious of reality, I heard David's voice screaming from the telephone, which had fallen on my lap.