Read The Heart of a Duke Online

The Heart of a Duke 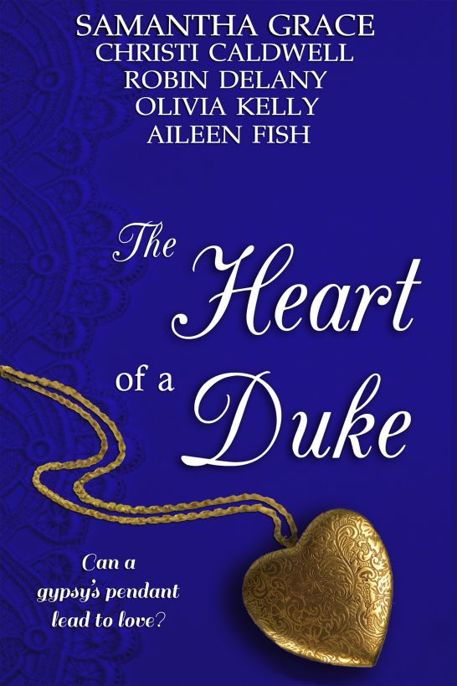 The Heart of a Duke

All rights reserved. No part of this book may
be reproduced in any form by any electronic or mechanical
means—except in the case of brief quotations embodied in critical
articles or reviews—without written permission.

The characters and events portrayed in this
book are fictitious. Any similarity to real persons, living or
dead, is purely coincidental and not intended by the
author.

This eBook is licensed for your personal
enjoyment only. This eBook may not be re-sold or given away to
other people. If you would like to share this book with another
person, please purchase an additional copy for each recipient. If
you’re reading this book and did not purchase it, or it was not
purchased for your use only, then please return to Smashwords.com
and purchase your own copy. Thank you for respecting the hard work
of the author.

Slim fingers adorned in gold rings wrapped
around Nadya Pankova’s shoulder and shook her from her
daydreams.

She blinked to clear the fog from her mind.
“Yes, Baba Lyuba.”

Twilight had descended over the
fair while Nadya had become lost in her musings about what
possessed anyone to live as
they
did. She would never understand the
gorgios
.

A man and woman strolled by her
grandmother’s tent, taking no notice of her, leaving Nadya free to
track their progress down the fairway without rousing
suspicion.
Gorgios
were a distrustful lot. It showed in the way they hugged
their children against their skirts when her people’s caravan
rolled into a village, and the men who often arrived at the gypsy
camp with pitchforks to demand they leave.

The woman’s back was impossibly straight and
her hair so tightly wound into a knot on her head it wouldn’t
surprise Nadya if her vision were blurred. The woman was a prisoner
to highborn expectations as much as she was to her confining
clothes. Yet she had something Nadya would never have, enough meat
on her bones to prove she never worried about from where her next
meal was coming.

Nadya’s stomach rumbled, reminding her she had
duties to perform if she wished to eat that night. She sighed and
set to the task of lighting the Argand burners at the entrance of
her grandmother’s tent. Colored glass placed in front of the lamps
lit the sailcloth tent with shades of blue and green. Her
grandmother’s best silks draped the arched opening and transformed
the inside into an exotic world where anything was
possible.

But more likely whoever entered the tent to
have his fortune told would leave with less coin in his pocket and
his head filled with a bunch of nonsense her grandmother made
up.

A collective gasp rose above the revelry from
the alehouse and the distant drumming of the tribal dancers. Nadya
crossed her arms in a casual gesture and smiled at Luca’s ability
to mesmerize the crowd with his sword-swallowing act. They would be
ecstatic when he brought out the torches and spewed fire like a
demon. It was the same act every day and night, and Nadya no longer
watched Luca for the daring feats, but for the rippling muscles
he’d developed over winter.

A group of girls near the back of the crowd
clapped and cheered, their wide eyes sparkling.

A shorter girl tugged at one of her
companion’s sleeves. “I want to see too.”

“
Charlotte, stop.” The girl
brushed her off with an annoyed glance. “You are being a
pest.”

“
But I am missing everything,”
Charlotte lamented. “Please, Alison?”

A blonde tossed a quick look over her shoulder
before turning to one of her friends. “Help Alison lift up
Charlotte so she can see.”

Alison and the bespectacled one cupped their
hands. Charlotte placed a boot in one makeshift stirrup, then the
other, and rose above their heads. The girls teetered and bumped
into the blonde.

The girls’ faces were strained and turning
red. “What does your sister eat? Rocks?”

“
I can’t hold her any longer.”
Alison released her fingers, as did her friend, and Charlotte’s
boots hit the dirt with a thump.

Alison’s partner adjusted her spectacles that
had been knocked askew by Charlotte’s elbow. “Let’s see what else
there is, Elle. We haven’t much time before we must return to the
house.”

“
Just a moment,” Elle said with a
dismissive wave.

Nadya studied the girls—five in all—wondering
which monstrous house awaited them. The largest belonged to the
Marquess of St. Aidans. Nadya had overheard her grandmother in
conversation with Baba Donka. The marquess was hosting a grand
house party and had arranged for their traveling group to come as
entertainment for his guests and the villagers.

Elle sighed and hugged her hands to her chest.
“Have you ever seen a more handsome man?”

The girls giggled and agreed the
sword-swallower was
splendid
indeed
.

Nadya rolled her eyes. As if any of these
pampered girls would look twice at Luca any other time, or him,
them. Though the blonde was beautiful in a way that tended to turn
men’s heads, gypsy or not.

A tumultuous churning began in Nadya’s gut
just like last week when she happened upon Luca composing a song
for Irina, the dog trainer’s daughter.

Her grandmother had proclaimed Nadya’s stomach
upset was a symptom of jealousy. Nadya had argued that Luca’s
horrible singing was to blame.

Elle’s sidekick, a shorter girl with reddish
hair, locked arms with her and drew her away from the crowd. “You
are already betrothed. Langley wouldn’t like you goggling at
another man, even if the sword-swallower does look like a
god.”

Elle grimaced. “Must you ruin my fun, Vallie?
I’d rather not think on Langley tonight.”

The bespectacled one claimed Elle’s free arm.
“I agree. The very idea of marriage and Langley makes my skin
crawl.”

“
He is only a few years older than
Elle’s brother, and Alex is far from old.”

“Please,” Elle groaned. “I do not
want to talk about my betrothed
or
my brother. And Langley’s age isn’t a factor. His
title well makes up for any less than pleasing
attributes.”

“
How old is he?” the little one
asked. Her sister shushed her.

Nadya ducked into her grandmother’s tent
before they caught her eavesdropping.

Bunic
ă
looked up with a lighted tallow
candle in her hand.
“You were too long
with the burners. Luca was distracting you again.”

Nadya’s chin lifted a notch. “I was watching
the girls. They will be here soon.” The ones with the easiest roads
to travel always wanted their fortunes told. “Let me
help.”

She circled the worn floor pillows
to take the candle from her grandmother and lit the others placed
strategically on metal trays around the tent. When the candlelight
flickered off the glass beads, it wasn’t hard to believe in magic.
At least that was what
Bunic
ă
always said. Since a belief in magic was detrimental to her
grandmother’s work, and Nadya liked to eat, she was happy to do her
part to help create a mystical ambiance.

Her grandmother poured water into a glass bowl
sitting on the low table in the center of the tent, then took her
place on the overstuffed pillow.

Nadya heard the girls’ giggles before their
leader, the one called Elle, poked her head inside. “This is the
fortuneteller tent, isn’t it?”

What could possibly have given her
that idea
? Perhaps the hand-lettered sign
hanging on a post outside?

Bunic
ă
ignored the inanity of Elle’s
question and waved her forward. “Come in. Come in,
chav
, and I will tell
your future.”

There was no hesitation in the
girl. She came forward with her head held high and the confidence
of one raised in privilege. “I already know my future, but everyone
should be able to boast having had her fortune read at least
once.”

Bunic
ă
smiled and urged the others
inside. “Perhaps you will be surprised, Lady Eleanore.”

“
How does she know Elle’s name?”
the littlest one whispered. Charlotte was a curious sort, always
asking questions.

Vallie shot an incredulous look in
Charlotte’s direction. “She is magic. That’s how she knows her
name.”

Lady Eleanore pursed her lips,
obviously doubtful of
Bunic
ă
’s
powers. “Papa has paid for their
services. Everyone knows who I am.”

Her certainty and pride rubbed
Nadya the wrong way. She met the pampered one’s gaze. “I have
magic, too, and I will use it to decipher
all
of your names.”

Nadya’s jaw hardened. It was time
to put on a show. She placed her fingers against her temples,
closed her eyes, and began humming and swaying.

When Nadya had allowed the
appropriate time to pass to build suspense, she snapped her eyes
open. She pointed a finger at Lady Eleanore’s sidekick. The bangles
on her wrist jangled like chimes. “I see a letter.”

Charlotte hurried to the pillows
and plopped beside Lady Eleanore. “What letter is it?”

“
There is no such thing as magic,”
her sister mumbled and came to sit too.

“
I see a V,” Nadya said, drawing
out the letter in her heaviest Romany accent. Their audiences liked
the thrill of meeting a real gypsy, and she didn’t want to
disappoint their current customers. The girls would part with every
shilling in their purses before they stepped one foot outside the
tent. She would make certain it was so.

“
It’s becoming clearer. I see a
second letter, an A.”

“
She is guessing,” Alison
grumbled.

Nadya’s eyes popped open, and her
mouth dropped as if in a silent scream. It was silly, but so were
the girls. “It’s
Vallie
. Your name is Vallie.”

“
Yes,” she said on a rush of
breath. “My name is Valera, but my family calls me
Vallie.”