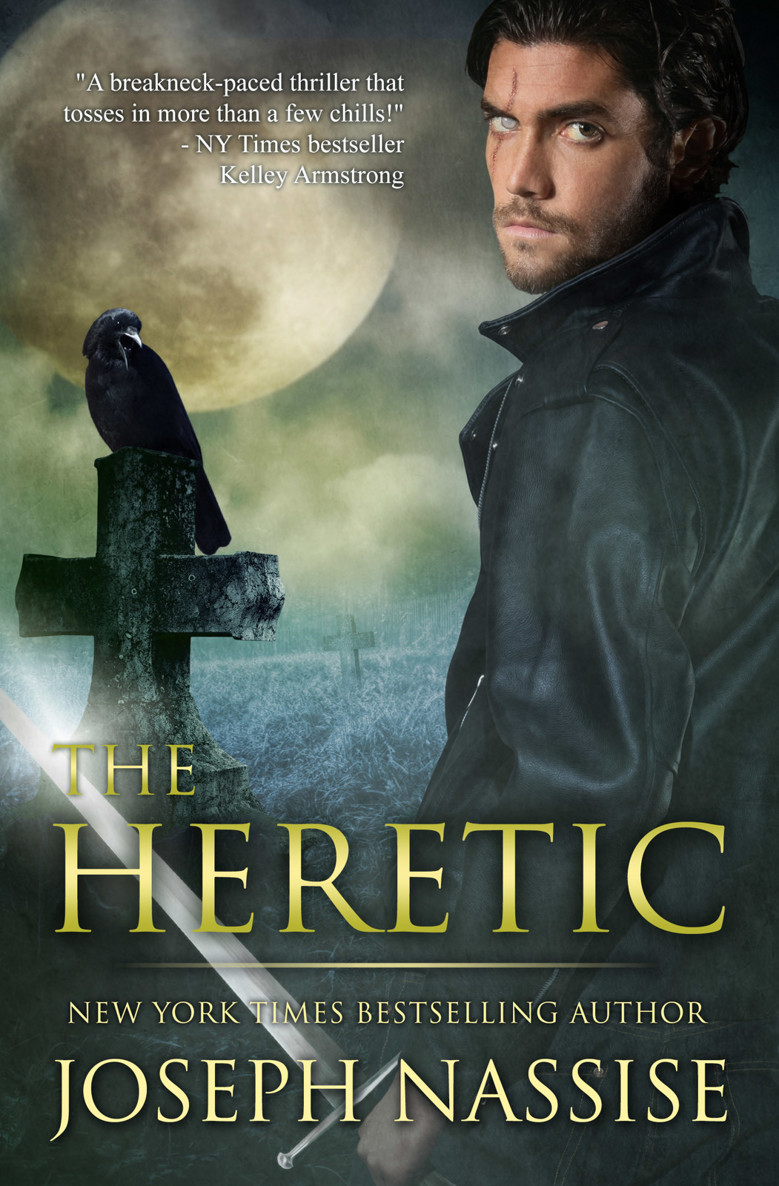 (Book One of the Templar Chronicles)

Danger lurks in the shadows and no one knows that better than those who have pledged themselves to keep the world safe from dark and increasingly deadly forces, the Knights Templar.

Left for dead in the wake of an attack by a fallen angel, Cade Williams now commands the Echo Team, one of six elite combat units in the Templar hierarchy. But Cade is no ordinary soldier; his encounter with the supernatural left him with a thirst for vengeance for the death of his wife, Gabrielle, along with a few unusual abilities of his own. Abilities that have earned him the nickname the Heretic among his faith-driven brethren.

When a group of necromancers raid a Templar stronghold and steal a powerful relic, Cade and the Echo Team spring into action to prevent the unimaginable consequences. But the mission begins to go awry when Cade discovers that the power behind the necromancers is none other than the Adversary, the angel of darkness that tried to kill him years before. Will Cade sacrifice the mission, and possibly the lives of his men, for the sake of his own agenda?

The Heretic is the first book in a genre-bending urban fantasy series that combines dark supernatural suspense with military adventure. If you like breakneck-paced thrillers, unforgettable characters, and intense battles with demons and other supernatural creatures, then you'll love this pulse-pounding series. 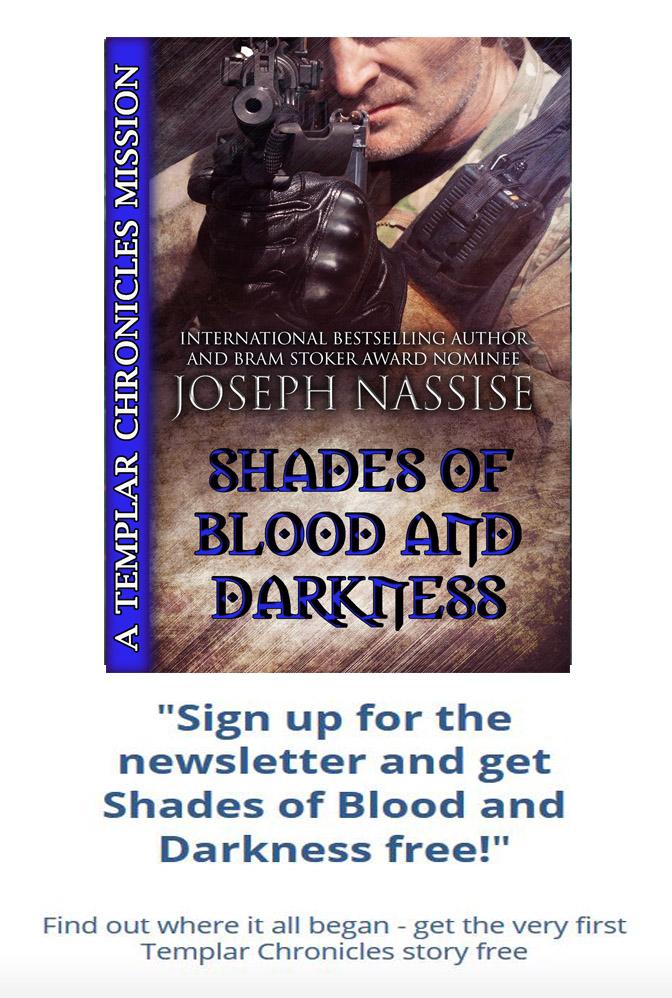 WELCOME TO THE ORDER

The book that you are reading is part of the Templar Chronicles series, in which the Templar Knights have been resurrected as a secret combat arm of the Church, charged with defending mankind from supernatural threats and enemies. The series is set in the modern world, where the average Joe is unaware of both the reality of the supernatural world and of the existence of the Order itself, a situation the Templars work diligently to maintain.

At center stage is Knight Commander Cade Williams, a veteran of the Order and a man torn between his thirst for vengeance against the supernatural creature that murdered his wife and his need to discover what happened to him during that same encounter several years before. Cade leads the famed Echo Team, a special forces-style unit that is called in only when the situation has become particularly dire. Echo is the best of the best, there is no doubt about that, but the fact that they are led by a man rumored to have more than a few unusual abilities of his own leave many within the Order more than a little uncomfortable in dealing with them.

The Heretic (Book One)

A Scream of Angels (Book Two)

A Tear in the Sky (Book Three)

Shades of Blood and Darkness(Novella #1)

Cade Williams crouched in an alley in one of Bridgeport, Connecticut’s rougher neighborhoods, watching the front of a two-story dwelling just up the street from his position. The smell of garbage from the Dumpster he was using for cover was heavy in the early-evening air, though Cade had gotten used to the stench.

“TOC to all units. You have compromise authority and permission to move to Green. I say again, Green.” The bone-mike was pressed securely against his lower jaw, the high-tech device carrying his words clearly to the rest of his team though they were spoken in no more than a whisper.

He pictured the assault group sitting in their specially modified Expeditions half a block away, the breaching rams in their laps. He knew they were concentrating on the sequence to come; who gets out first, who hits the door first, how to say “drop your gun” in Spanish.

His thoughts jumped to the sniper teams on the adjacent rooftops, his eyes and ears since this assault began. He knew their preparations intimately, from the way they slid that first bullet into the breach with their fingertips, needing the reassurance of feeling it seat properly, to the thousands and thousands of rounds they’d fired, learning the way the weapons reacted to heat and wind and weather.

He knew that his sharpshooters were aligning their bodies with the recoil path of their weapons, pressing their hips against the ground, and spreading their knees shoulder width apart for stability. He knew what it was like to stare through a Unertl ten-power scope at the target, watching, waiting for the moment. He’d been there himself, too many times to count.

Discipline was the name of the game, and in Cade’s unit, it was the only game being played. The stakes were too high, the consequences too horrible for it to be anything but deadly serious.

His men took out the two guards standing near the front door from 250 yards away, the impact of their .308 caliber rounds knocking the targets backward into the tall grass on either side of the front stoop with barely a sound. As the bodies hit the ground the Expeditions slammed to a halt out front, the rest of Echo Team swarming the house. The front and back doors fell victim to the breaching rams, flash-bangs quickly following, then Cade’s men were inside. Brief, sporadic gunfire reached his ears, then silence.

“Echo-1 to TOC. Structure is clear. Objective is secured.”

“Coming in,” Cade replied. He would have preferred his usual position on one of the entry teams. He was the type of commander who led by example, not from the sidelines, and staying behind as tactical operations command had been a test of his patience; but his concern over their target’s ability to detect his presence had won out over his need to be involved in the action. The need for stealth was over. Signaling Riley, his second-in-command, Cade emerged from cover and strode briskly forward.

He swept up the steps and entered the house, ignoring the snipers’ victims lying in the uncut grass on either side of the porch. As he moved swiftly through the lower floor he passed four other bodies, all young Hispanic males, each lying in a rapidly expanding pool of blood. He had no sympathy for their wasted lives; they were on the wrong side of this conflict, and the unflinching hand of righteousness had finally caught up with them. If anything, he was simply pleased that there were four fewer gangbangers on the city streets. It was the man that his team held captive in the kitchen that truly mattered to Cade. Everything and everyone else beyond that was just a means to an end.

Juan Alvarez was seated in the middle of the room in an old chair, his arms pulled back between the steel posts supporting the seat back and his hands secured together with a set of nylon flex cuffs. Wilson and Ortega stood a few feet to either side of the prisoner, their HK MP5s at the ready and aimed in his direction.

His pistol still in hand but pointed at the floor, Cade crossed the room to stand in front of the prisoner. Alvarez looked as if he had just been roused from sleep; his normally slicked-back hair was in disarray, and all he was wearing was a pair of hastily donned jeans. His usual air of smug superiority was still in place, however.

Cade fully intended to change that.

Alvarez had been under surveillance by Echo Team for the last three weeks. During that time it quickly became clear that the Bridgeport police were correct in their suspicions; Alvarez was indeed the primary conduit for the movement of heroin through Connecticut and into the rest of New England.

Cade didn’t care about the drugs.

He wanted Alvarez for a far more personal reason, and he wasted no time getting to the point.

The prisoner gave him a look of disdain, and a stream of rapid-fire Spanish poured forth from his mouth. Cade understood enough to know that it was more a commentary on his mother’s background than an answer to his question.

Shaking his head in resignation, Cade nodded to Riley.

The larger man stepped forward and gripped the back of the prisoner’s chair, holding it tightly.

Cade moved closer, placed the barrel of his pistol against the prisoner’s left kneecap, and, without another word, pulled the trigger.

Riley held the chair firmly in place against the man’s struggles.

Cade waited patiently until the screaming stopped. Then, softly, he said, “I don’t have time for this. I asked you a question. I want an answer. Where is the Adversary?”

This time, the answer was in English.

“Drop dead, asshole. I don’t know who you’re talkin’ about.”

Expressionless, Cade shot him in the other leg, shattering the man’s right kneecap.

Alvarez writhed in agony, his muscles straining against the pain. Riley’s arms tensed, but that was the only outward sign of the increased effort he exerted to hold the prisoner securely in place.

Over the wounded man’s cries, Cade shouted, “Tell me where he is!”

The prisoner lapsed back into Spanish, cursing his interrogator vehemently; but he did not acknowledge Cade’s demand. His blood flowed down his legs and began to pool on the cracked linoleum beneath his feet.

Cade snorted in disgust and motioned Riley out of the way. The sergeant lost no time in following orders.

Cade raised the gun and pointed it at the prisoner’s face. “Last chance.”

With that, Alvarez went abruptly still. His eyes lost focus, as if listening to a voice no one else could hear, and his face went slack. Out of the corner of his eye Cade caught Riley looking at him quizzically, but he kept his eyes on the prisoner, watching him closely and didn’t respond.

Without a change in expression, Alvarez began to shake. His head twisted from side to side erratically as it shuddered atop his neck, darting this way and that like a hyperactive hummingbird. His mouth opened wide, stretching impossibly far. It seemed as if he was screaming, but no sound issued forth. Finally, with a loud pop, his lower jaw dislocated itself.

Cade calmly watched, his gun unwavering from the target.

The shaking intensified, the legs of the chair skipping and bumping against the tiles, leaving little skid marks in the blood pooling beneath Alvarez’s feet. A strange squealing sound came from his throat. Alvarez’s eyes bulged from their sockets, and blood ran freely from his ears.

It was only when a widening crack appeared in the center of the prisoner’s forehead, a crack that dripped a substance far darker than blood, that Cade reacted.

With a twitch of his trigger finger, he put a bullet through Alvarez’s skull.

The prisoner and his chair went over backward to lie still on the blood-stained tiles.

In the silence that followed, no one moved for several long moments as they waited to be certain the thing that had once been Juan Alvarez was good and truly dead, then Cade gave the signal, and the team went instantly into motion. One of the men policed the brass from the floor while another checked to be certain no one had left anything behind that might betray their presence in the house. Thirty seconds later the team was filing out the front door and climbing back into the Expeditions, with Cade and Riley taking open seats in the lead vehicle.

Less than five minutes after entry the team was on its way, leaving behind seven bodies to lie cooling in the empty building.

Niall O’Connor watched those around him intently. It late in the evening but the Vienna streets were still crowded, which could make spotting a tail difficult. He was a veteran of this kind of operation, however, and so he took his time, carefully examining his surroundings. When he was certain he hadn’t been followed from the museum, he stepped into the phone booth on the corner and shut the Plexiglas door behind him. Ignoring the mounted public telephone, he removed a satellite phone from his pocket and dialed an overseas number from memory.