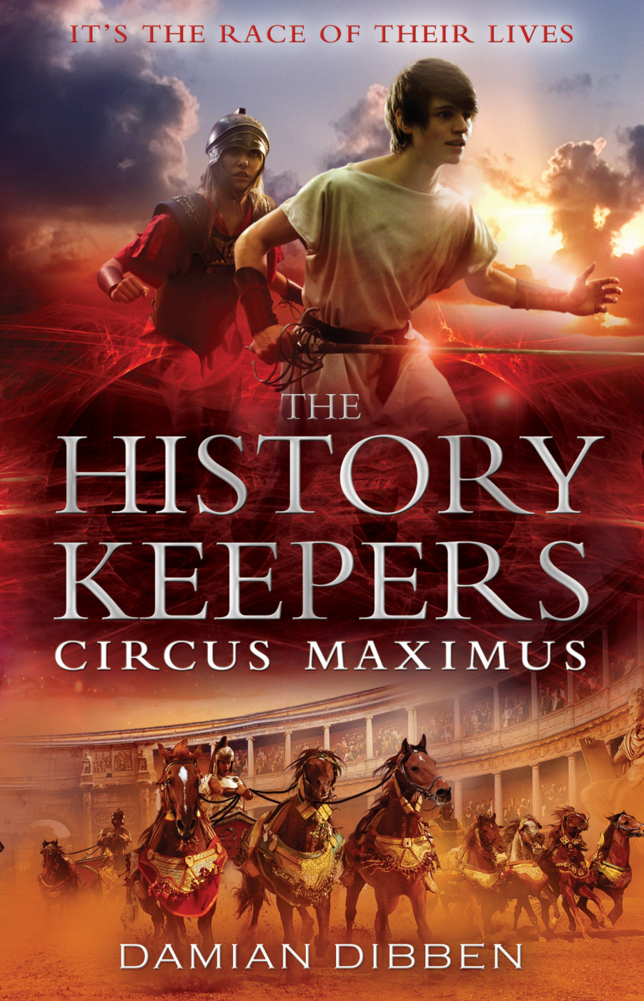 1. The Queen of the Night

8. Ocean to the Ancient World

16. Andromeda and the Sea Monster

19. The End of Dominions

When Jake and the History Keepers receive this cryptic message, all their skills are put to the test. Who is the sender, and where on earth – and in time – has the code come from?

The clues lead them to AD 27 – the last-known whereabouts of Agata Zeldt, ‘the most evil woman in history’. None but the bravest agent could possibly travel that far back into the past.

They must embark upon another rollercoaster adventure that will take them from the frozen wastes of Sweden, right into the dangerous heart of Ancient Rome.

THE PAST IS IN DANGER – ONLY JAKE DJONES CAN SAVE IT!

For the mad and marvellous
Morrisons of Derw Mill

THE NIGHT JAKE
Djones brought total disgrace upon himself and jeopardized the very survival of the History Keepers’ Secret Service was so unnaturally, bitterly cold that the Baltic Sea almost froze over.

From the rocky, windswept shores of Denmark in the west to the frozen remoteness of Finland in the north, an endless expanse of ice – as thin as gossamer and a ghostly silver in the moonlight – curved across the horizon. A continual dusting of soft snow seemed to silence this far corner of the Earth in an otherworldly hush.

A ship with blue sails broke through the veneer of ice even as it was forming, heading for the twinkling lights of Stockholm – a fairytale archipelago of bays, promontories and islets.
The ship was called the
Tulip
, and at the creaking wheel stood a tall figure in a long fur coat. He reached out an elegant gloved hand and rang the bell. ‘It’s time, gentlemen,’ he announced in a soft Charleston drawl.

Immediately two more silhouettes, both well wrapped up, came out of the snowy darkness and joined him at the helm, followed by a brightly coloured bird – a parrot – who nestled, shivering, on his master’s shoulders. They gazed out eagerly through the snow as the ship sailed on towards the port. Their faces were slowly illuminated . . .

The figure in fur was strikingly handsome, a smile playing across his chiselled face. Next to him stood the owner of the parrot – a shorter boy with spectacles, his brows raised in a studious frown. The last person had olive skin, curly dark hair and big brown eyes that blinked with excitement. Three intrepid adolescents, young agents of the History Keepers’ Secret Service: Nathan Wylder, Charlie Chieverley . . . and Jake Djones.

Charlie was the first to speak. ‘Head for that central island there,’ he said, pointing towards a group of spires and towers. ‘That’s Stadsholmen, Stockholm’s old town – the grand jewel of these
islands, centre of the Swedish Empire. Though sadly, of course, we’re not arriving in the city’s heyday. In 1710 our old friend the plague came here, taking out nearly a third of the population.’

‘Not arriving in its heyday?’ drawled Nathan, pulling his coat tighter against the snow. ‘That’s putting it mildly. Sweden in the winter of 1782 has got to be the most inhospitable place in history.’ He produced a tiny box from his pocket and applied lip salve. ‘If my lips get any drier, they’ll fall off.’

‘Hell’s bells, Nathan, ’
92
!’ Charlie exclaimed, closing his eyes and clenching his teeth in annoyance. ‘We’re in 17
92
. Honestly, I sometimes wonder how you made it this far.’ Mr Drake – that was the name of his pet parrot – squawked in agreement, puffing up his feathers indignantly at the American.

‘I’m pulling your leg.’ Nathan smirked. ‘Do you really think I’d be wearing this ankle-length sable coat in 17
82
? Not to mention these buckle-less riding boots – so austere they’re practically Napoleonic.’ He turned to Jake. ‘The 1790s are all about dressing down.’ Nathan loved clothes almost as much as he loved an adventure.

‘Buckle-less riding boots, my aunt,’ Charlie
muttered to himself. ‘And don’t even get me started on your sable coat. It’s a work of barbaric savagery. Those poor animals had the right to a life as well, you know.’

As Jake listened to their banter, he felt a great swelling of pride at the thought that he belonged to the greatest and most mysterious organization of all time: the History Keepers’ Secret Service.

Just a month had passed since his life had changed for ever. He had been kidnapped, taken to the London bureau and informed that his parents had been secretly working for the service for decades – and indeed had gone missing in sixteenth-century Italy!

From then on it had been a nonstop roller-coaster ride. He had travelled through time, first to Point Zero – the History Keepers’ headquarters on the Mont St Michel in Normandy, 1820 – and then to Venice in 1506, as part of the mission to find his mum and dad, and to stop the diabolical Prince Zeldt from destroying Europe with bubonic plague.

He had been reunited with his folks – but they had left behind Topaz, the mysterious and beautiful young agent to whom he had become devoted.
Most extraordinary of all, he had discovered that his beloved brother Philip, who had apparently died in an accident abroad three years ago, had also been a History Keeper; there was a chance – a very slim chance – that he was actually alive somewhere in the past.

And now Jake was already on his second mission. Admittedly he had been selected more through luck than anything else (nearly everyone at Point Zero had come down with an appalling tummy bug after eating mussel soup, and agents were thin on the ground), and it was not a dangerous assignment – otherwise he would definitely not have been included, as he was still a novice. But nonetheless here he was, travelling to the Baltic in the 1790s to collect a consignment of atomium, the precious liquid that made travelling through history possible.

‘So, tell me something about the person we’re meeting,’ he said, trying to hide the tremor in his voice.

‘Caspar Isaksen the Third?’ Charlie shrugged. ‘Not personally acquainted, but he’s our age, I believe. I cooked a pumpkin tagine for his father once. He said it would live with him for ever.’ Charlie loved food with a passion and was an expert
cook – although an experience in the kitchens of Imperial Paris had left him a staunch vegetarian.

‘
I’ve
been personally acquainted with Caspar Isaksen the Third. Twice,’ drawled Nathan with a roll of his eyes. ‘You can’t really miss him – he eats cakes like they’re going out of fashion, and never stops sneezing.’

‘So what is the Isaksens’ connection with atomium?’ Jake persisted. He had learned all about this substance on his first voyage. To travel to a particular point in the past, agents had to drink a dilution of it, mixed with exact precision. Generally it worked only out at sea, in the magnetic maelstrom of a
horizon point
; and then only on the few humans with
valour
– an innate ability to travel through the ages. The History Keepers needed this precious liquid in order to watch over history, protecting the past from dark forces that sought to destroy it and plunge the world into darkness.

‘The Isaksens
are
atomium,’ replied Charlie. ‘The family have been in charge of its production for more than two hundred years. As you know, it’s notoriously tricky to make. To produce an effective batch, its ingredients – which themselves are kept a secret from all but a handful of keepers – have to be
refined over a period of years . . .’

‘Quite,’ Charlie continued, ‘and it must be created in freezing conditions. That’s why Sejanus Poppoloe, the founder of the History Keepers, set up the laboratory in northern Sweden. After he had done so, back in the 1790s, he handed duties over to Frederick Isaksen, the first of the line. To this very day,
all
atomium – as used by every bureau in the world – has been created in the Isaksens’ laboratory.’

‘So, why are we meeting in Stockholm and not at the actual laboratory?’ Jake asked.

‘Dear me,’ Charlie sighed, ‘you
have
got a lot to learn. No one goes to the laboratory.
No one
has the slightest idea where it is, not even Commander Goethe.’

Jake stared back in surprise. Surely if anyone knew where the laboratory was based, it would be Galliana Goethe – the commander of the History Keepers for the past three years.

‘Only the Isaksens keep the secret and pass it on,’ Charlie continued. ‘Can you imagine the disaster if its location got into the wrong hands? Catastrophe times infinity!’

‘There’s a myth,’ Nathan said, ‘that it’s set within
a mountain, accessed through a secret limestone cave.’

‘In any case,’ Charlie concluded, ‘when the atomium is ready, a member of the family delivers it to a prearranged location. As Caspar Isaksen is a fan of the opera, like me, the opera house was the venue chosen on this occasion. And not a moment too soon,’ he added sombrely. ‘Atomium stocks at Point Zero are at an all-time low. This consignment is vital.’

‘So no slip-ups from the new boy,’ Nathan said mischievously, thumping Jake on the back.

Jake looked around at the port. There were ships everywhere, an intricate forest of masts and rigging. Along the shore, depots and warehouses teemed with activity as sailors and tradesmen, their breath visible in the freezing air, worked into the evening, loading and unloading their cargoes: iron, copper and tin; crates of wax, resin and amber; sacks of rye and wheat; consignments of animal furs; and endless boxes of shining fish. Mr Drake surveyed the bustle with a keen eye, always intrigued – and just a touch nervous – when arriving at a new destination.

The Terminals by Royce Scott Buckingham
Mick Sinatra: The Harder They Fall by Mallory Monroe
The Last Cato by Matilde Asensi
Secrets by Freya North
Dream Lover by Lynn Davis
The Mammoth Book of the West by Jon E. Lewis
Banner of the Damned by Smith, Sherwood
Tommy by Richard Holmes
Five Go Down to the Sea by Enid Blyton
Washika by Robert A. Poirier