Read The HOPE of SPRING Online

The HOPE of SPRING 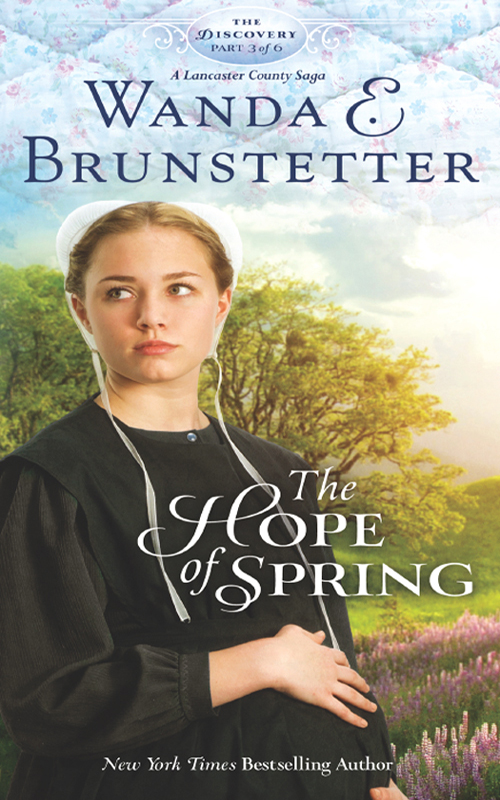 All rights reserved. No part of this publication may be reproduced or transmitted
for commercial purposes, except for brief quotations in printed reviews, without written
permission of the publisher.

All scripture quotations are taken from the King James Version of the Bible.

This book is a work of fiction. Names, characters, places, and incidents are either
products of the author’s imagination or used fictitiously. Any similarity to actual
people, organizations, and/or events is purely coincidental.

Our mission is to publish and distribute inspirational products offering exceptional
value and biblical encouragement to the masses.

and so fulfil the law of Christ.

T
here’s no need for you to fuss over me,” Meredith said as her mother tucked a blanket
under her chin. “I’m not having any more contractions, and I don’t see why I can’t
go home to my own house.”

Mom patted Meredith’s arm affectionately. “You came close to losing the
boppli
yesterday, and the doctor said you need to rest for the next several weeks until
your pregnancy is no longer at risk. I’m guessing you won’t do that if you go back
to your house and start looking around at things you want to do. So, since you need
someone to take care of you right now, and you shouldn’t be doing anything strenuous,
it’s best if you stay here with us for the time being.”

Meredith knew Mom was right, but that didn’t make it any easier to deal with. She
wanted to carry the baby to full term and have a homebirth in her own home in a natural
way, with the midwife present.

“I’m sorry about not being able to fix supper for you and the family last night,”
Meredith apologized. “I was looking forward to cooking you a meal.”

Mom shook her head. “Don’t worry about that. There’ll be plenty of other times you
can make us supper. Right now, you need only be concerned about yourself and the boppli.”

“I know.” Meredith settled back on the sofa and tried to relax. “Did you get a chance
to meet Jonah when you were at the hospital?” she asked.

“We did, but just for a few minutes, when we first got there. We’re grateful he stopped
by your place when he did and got the help you needed so quickly. Jonah seems like
a caring young man. I’m sure he’ll fit in well with our community.”

“He was kind when I worked with him at the restaurant in Pinecraft, as well.”

Mom’s eyebrows lifted. “Is he the same young man who wrote letters to you for a few
years after you returned from Florida?”

“
Jah
.” Meredith sighed. “I don’t know what I would have done if he hadn’t stopped by when
he did. With the way I was hurting, and then having to trudge through the snow, I
might not have made it to the phone shack in time to call for help.”

Mom clicked her tongue. “Which is exactly why you shouldn’t be alone.”

Tears seeped out from under Meredith’s lashes and splashed onto her cheeks. “I appreciate
you letting me stay here, Mom, but you really don’t need one more person to take care
of right now.”

“It’s not a problem,” Mom said, smiling at Meredith. “Around here everyone has a job
to do, and right now, my job is looking after you.”

“But I have responsibilities at home, and now I have a hospital bill to pay, so I
really need to get busy and make some head coverings to sell. Then there’s that spare
room next to mine. I want to get it painted and fixed up before the boppli comes.”

“Since the baby isn’t due until July, there’s plenty of time for that. Your
daed
can do the painting as soon as he finds the time, and Stanley will take care of your
horses, get the mail, and check for phone messages after school every day.” Mom gave
Meredith’s shoulder a gentle squeeze. “Your daed is over at your place right now,
checking on things. I believe he was planning to fix the piece of siding that broke
off your house.”

“I should have told Dad to get the sloppy joes, potato salad, and macaroni salad out
of my refrigerator and bring everything back here so we could have them for supper.
That way, you won’t have to cook anything tonight.”

“That’s okay. We can get your
bruder
to go after the food if your daed doesn’t think of it. Now I want you to relax and
quit worrying about things.”

In hindsight, Meredith knew she should have taken better care and not done anything
too strenuous yesterday. It had been foolish to carry the ladder from the barn up
to the second-floor bedroom. Now her body needed time to rest and heal. She really
had no choice but to stay here right now, so she may as well try to relax and enjoy
the pampering.

I’ve lost Luke
, Meredith thought as her eyes drifted shut,
and I won’t take the chance of losing our baby.

Jonah had just finished working at the buggy shop for the day, so he decided to go
over to Meredith’s house. She was supposed to get out of the hospital this afternoon,
and he wanted to see how she was doing.

Jonah borrowed his dad’s horse and buggy, but he couldn’t seem to get the horse, Knickers,
to move along very fast. No matter where he went with the horse and buggy, Jonah usually
enjoyed taking in the scenery, but not today. He barely noticed the snow in the fields,
and the blue jays squawking overhead seemed more of an annoyance to him.

Finally, he was there, and after securing Knickers to the hitching rail near the barn,
he headed for the house. Jonah had just stepped onto the porch, when another horse
and buggy pulled into the yard. After the driver got out and secured the horse, Jonah
realized it was Meredith’s dad, whom he’d met at the hospital. Jonah waved and waited
for Philip to join him on the porch.

“If you’re lookin’ for Meredith, she’s not here,” Philip said.

“Is she still in the hospital?” Jonah asked.

“Nope. She was released this afternoon, and she’ll be staying at our place for a while.”

Jonah nodded. “Guess that makes sense. It’s probably not a good idea for her to be
here alone, trying to do things by herself.”

“It sure isn’t—especially now that she’s expecting a boppli. Losing Luke has been
hard on Meredith. She loved him a lot. But having a baby will help keep his memory
alive.” Philip leaned against the porch railing. “It’ll be hard for her to raise the
baby alone, so we’re gonna help out as much as we can, despite her objections.”

“Will Meredith sell her house and move in with you permanently?” Jonah questioned.

Philip shrugged. “I’m not sure about that. My daughter can be stubborn sometimes,
and I know she wants to make it on her own. But there are bills and taxes to pay,
and with no money comin’ in, she may be forced to sell.”

“That’d be a shame,” Jonah said, wishing there was something he could do to help out.
“Won’t some folks in this community give Meredith money?”

“There will probably be a benefit auction to help with her medical expenses.” Philip
glanced toward the barn. “But I’m thinkin’ she ought to sell Luke’s horse, because
she doesn’t need him anymore, and I’m sure the gelding would go for a fairly good
price.”

“I’d be interested in buying it,” Jonah said. “The horse I had in Ohio was getting
old, so I sold him before I moved here, and now I need a new one.”

Philip reached under his hat and scratched his head. “That should work out well for
Meredith, but I’ll have to discuss it with her first, of course.”

“Since she’s staying over at your place, why don’t I follow you home? Then I can ask
her about buying Luke’s horse.”

Philip shook his head. “I think it’s better if I talk to her first. Why don’t you
drop by our place sometime tomorrow?”

“All right then, I’ll come over after work tomorrow afternoon,” Jonah agreed, although
he was disappointed he wouldn’t be seeing Meredith until then.

Out back, an energetic German shorthair pointer barked frantically from his kennel.
“Guess I’d better get ole Fritzy boy and take him home with me,” Philip said. “Poor
mutt probably can’t figure out what’s goin’ on. Luke is gone, and now the dog’s most
likely wondering where Meredith is.”

Jonah extended his hand. “It was nice to see you again, Philip. I’ll take a look at
the horse before I go so I’ll have a better idea of how much I should offer for him.”

Gone With the Wolf by Kristin Miller
Base Instincts by Larissa Ione
Happy Ant-Heap by Norman Lewis
A Proper Family Christmas by Chrissie Manby
The Invisible Assassin by Jim Eldridge
Enticed by Jessica Shirvington
The Ghosts of Heaven by Marcus Sedgwick
The Earl Who Loved Me by Bethany Sefchick
Fear in the Cotswolds by Rebecca Tope
The Elder Gods by David Eddings, Leigh Eddings