The House of Grey- Volume 6 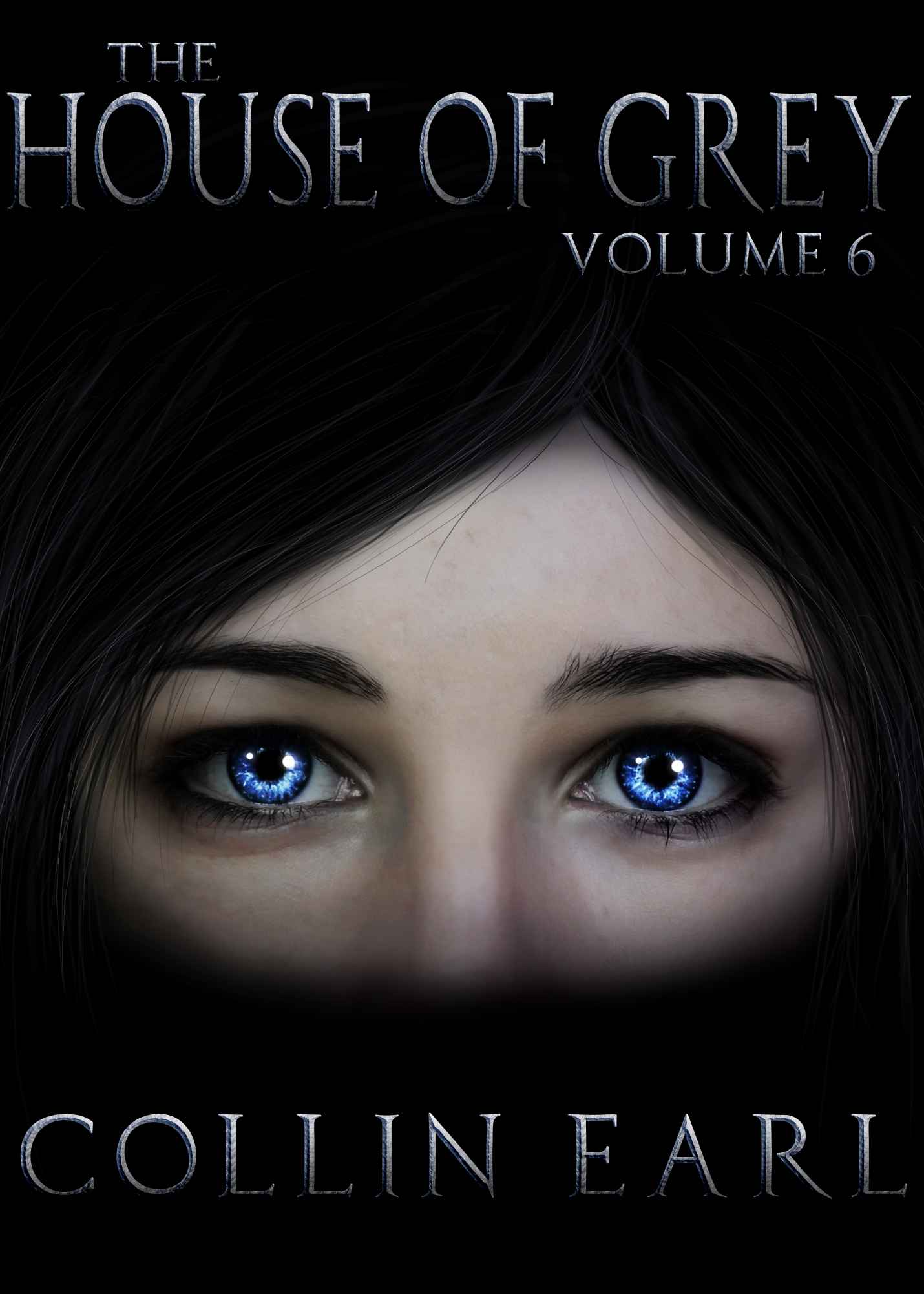 The House of Grey- Volume #6

Chapter 60 –
Breath
of the Dragon

The voice held its usual haughty tone but something else gurgled underneath. Something that Monson did not recognize at first.

Monson realized what it was as Baroty wrenched the blade from his grasp and took a step back.

Baroty was afraid, and this spurred Monson to act. He stood to his feet, allowing his anger to flow freely, and ripped his own sword from his back. Once in his hand, silver light gushed over the blade like water from a breaking dam, completely drowning the length of the metal.

A laugh that was not his own spilled from Monson’s mouth as if the light’s energy were some sort of joke. Baroty, seeing an opportunity, attacked. Another flash of bright silver light met his heavy overhand strike. The light turned tangible
;
its force sent Molly’s Box of Protection tumbling. The crashing of rock and bodies comingled with the scattering debris. When the light settled back to a dull pulse on Monson’s hands and the dust settled, the dying Molly looked untouched and commandos were already helping a shaken and battered Baroty back to his feet.

As Monson stepped out of the wreckage and rubble, he was met with another truly frightening sight: the bright silver energy twisting and turning on top of itself, changing its consistency. It grew brighter and became almost fluid; it seemed to flow from his hands, arms and legs. It was as if Monson Grey was melting in a pool of silver.

All weapons in the room shifted in the face of fear itself, as everyone pointed his payload at the apparition that stalked towards them. Baroty, regaining his composure, smoothed out his rumpled cloak and wiped away a droplet of blood from his lip. “You’ve taken control then? How curious.”

Another laugh burst from Monson’s mouth; a laugh that was cold and guttural. A sound less like a laugh than the ring of death’s final curtain call. Once more, words exited his mouth—words that did not originate from him.

“We’ve met before,” the voice addressed Baroty. “It seems that you remember us.”

Baroty’s face contorted into a pool of uncontrolled hate. “So my assumption was correct?”

He touched his arm protectively and without waiting for a response, asked, “So then, you must be who Marques thought you were?”

“We are not concerned with paths that are not our own. We are who we have always been, who we always will be, even if some of our number remembers not.”

The commandos adjusted their weapons, wiping sweaty hands and clearing uneasy throats. Baroty seemed just as confused. He tried to hide his discomfort as he asked his next question.

Monson spoke once more, oozing tangible darkness. “Because unlike you, we are power. True and everlasting power that lives outside of any bounds or reason and is incomprehensible to someone such as you. We communicate because we must. And now, you perish because you thought you could seize power without consequence. ”

“So you are the Hero, then? You truly are the Being of Seven Bloods.”

He scanned the room. “And the deaths of all your followers.”

He let out one last, deafening laugh just as the silver molten energy retracted and began to gather at
his
hands and feet.

That did it. The now thoroughly scared group of commandos attacked. A cacophony of cannon fire ripped through the room and sailed towards Monson Grey. Four-foot daggers of ice, bulldog-sized stalagmites of rock, and fireballs the size of punching bags collided, the ice, earth and fire mixing to create a foggy shield of destruction that obstructed all vision. Monson felt
the ground shift
on
either side of him and something cold and wet pepper
ed
his face.  The dust-filled steam slowly settled, a brief time in which all was quiet.

“Is it done then?” whispered Baroty, his head slightly down. He once again grabbed at his forearm. “You were wrong, Marques. It has to be this way. In the—”

The dust finally cleared and revealed two more unexpected guests
.
Markin Gatt and Brian stood on either side of Monson
with
a hand on
his
shoulder
s
. Monson
could see
Baroty
through a large hole in the center of a thick wall of ice. From the looks of
the
shards of broken ice, the spell had been cast moments before the commandos’ deadly barrage found its mark.

Mr. Gatt stood alongside Monson, grabbing his shoulders in a curious gesture. Crisp, bright yellow energy, like the smile of the noonday sun, poured from Mr. Gatt’s hands. The energy penetrated Monson, making its way up and down his body before Monson abruptly fell into Mr. Gatt’s outstretched arms. He righted himself a moment later, slightly dazed.

Mr. Gatt whispered to him, “Welcome back, Mr. Grey. So happy you could join us. Why did you not stay in your room?”

Monson, his head feeling like it was going to split open, answered weakly. “Mr. Gatt, is that you?” Then more forcefully, he said, “I didn’t know that I was supposed to stay in my room. Love what you did to the place—you owe me a new wall, by the way. Where did that big freaking hole come from?”

Mr. Gatt chuckled slightly. “ You certainly cannot believe that
was
me?  Regardless, it is good to see you still have your sense of humor.”

Monson shrugged. “I’m pretending, trust me. Listen, before things get ugly, Molly is back there and she’s hurt—badly. If we don’t do something, she may die.”

He shuddered at the thought.

Mr. Gatt hesitated before responding. “Brian helped her with a Kei stimulation enchantment before we intervened here. It will activate her Kei lines and stimulate natural healing. That is the best we can do right now. We are going to be hard-pressed to keep the rest of us alive, so please prepare to run on my signal.”

He then took a step forward to stand next to Brian; both looked relaxed as they stared down at an absolutely livid Baroty.

“And who the blazes are you?” asked Baroty through gritted teeth.

“Now that is interesting,” Mr. Gatt nodded towards Brian. “He does not recognize our Kei signature. But I guess that is not
too
surprising; we were in his last class.”

Brian addressed
Baroty
. “We, on the other hand, know exactly who
you
are. It was
your
Kei signature that gave you away.” Brian pointed directly at Baroty, then back at Monson. “It has been many years, Sal-die.”

The word rang something in the back of Monson’s mind.

Baroty stared at the two men as if he had seen a ghost. “Sal-die?” he repeated softly. His face contorted in a painful expression, like he was going to vomit. “No…it couldn’t be.”

Mr. Gatt whispered in a slightly patronizing fashion. “Ahh, I see you are starting to remember.”

Baroty’s face paled slightly. “So the Magi really have found a foothold on this miserable planet.” He laughed ironically, seemingly privy to some hilarious inside joke. “They are finally looking for it after ignoring this world for so long.”

“Not only the Magi,” replied Mr. Gatt. “But all the races. The word has been sent. The Being of Seven Bloods has been found. He
will
fulfill
his destiny just
as
you and I
will
fulfill
ours
. I do not know what it is you are scheming at, but it ends here.”

Baroty sneered. “The Paladin Magi and their demands. Aren’t you tired of injecting yourself into the affairs of others? What makes you think that you have any claim to this world, that you have any right to stop me?”

“We hold no more power than you, Sal
-
die…
or should I call you, Bei-sai, a title consistent with your treachery” said Mr. Gatt, placing his hand on his chest. “We simply do what our Order demands of us and what we hold to be right. We will let the Great Creator work out the details.”

“Spoken like a true pawn.” Baroty chuckled again. “Well, then, this is good. It was good to see some of my students again. Even if it was for just a short time.”

Baroty pointed at Monson and the other two men. “Kill them.”

All at once, several things happened in rapid succession. Brian, still in front of Monson, bellowed out a phrase that Monson could not hear, though it was obvious what he was doing. Columns of ice materialized out of the ground, supplanting the broken ice walls and blocking the hole through which they had been conversing with Baroty. Brian’s spell created a wall several times thicker than what had been there, but the increased thickness did not matter, as gunfire quickly obliterated it. Mr. Gatt was back at Monson’s side in a flash, pulling him back towards Molly and the remnants of her Box of Protection.

“We need to fall back!” yelled Mr. Gatt. “We have to hold out just a bit longer!”

“Hold out for what?” cried Monson at the top of his lungs. “What are waiting for?”

No sooner had Monson asked his question than a horn sounded over the explosions. All action stopped; everyone ceased firing and yelling and just listened.

The bugle sounded again and this time Monson was able to get a handle on its source. He looked straight up, and his surprise pushed every other thought from his head.

Silver-suited people rappelled towards the ground from atop massive creatures resembling dragons. They wore Glyian Combat Gloves on both hands and carried medium-length sheathed swords strapped to their backs. The invaders descended their ropes with frightening speed, firing spells and forcing a space below them.

“There are women too, you know. Members of H.U.M.A.N.E., actually. Glad they could make it.”

“Well…sort of. They are technically Dragoons.”

A large, falling, jagged dagger of ice cut short the remainder of the conversation. Mr. Gatt resumed pulling Monson back towards Molly and the rubble that was the remnants of her spell.

“I want to you to take Molly and run. I have prepared some help for you, as well as an escape route.”

Monson stumbled over his words. “Escape route? Help? Run? Why? The cavalry just showed up, right? Let’s go and kick some commando butt!”

Mr. Gatt shook his head. “Impossible. The rune on your skin is unstable. I do not know what will happen if you get upset again and I cannot risk you being captured by Baroty. I think I have finally pieced together what he wants you for, and knowing him, he will stop at nothing until he gets what he wants. He is not as powerful as he once was, but he is still a threat.”

A Cruise to Die For (An Alix London Mystery) by Elkins, Aaron, Elkins, Charlotte
Death Sentence by Sheryl Browne
The Media Candidate by Paul Dueweke
In Place of Death by Craig Robertson
Twilight of the Eastern Gods by Ismail Kadare
Gabriel's Regret: Book 1 (The Medlov Men Series 2) by Latrivia Welch, Latrivia Nelson
A Ghost Tale for Christmas Time by Mary Pope Osborne
The It Girl by Katy Birchall
The Truth About Kadenburg by T. E. Ridener
Conversations With the Fat Girl by Liza Palmer