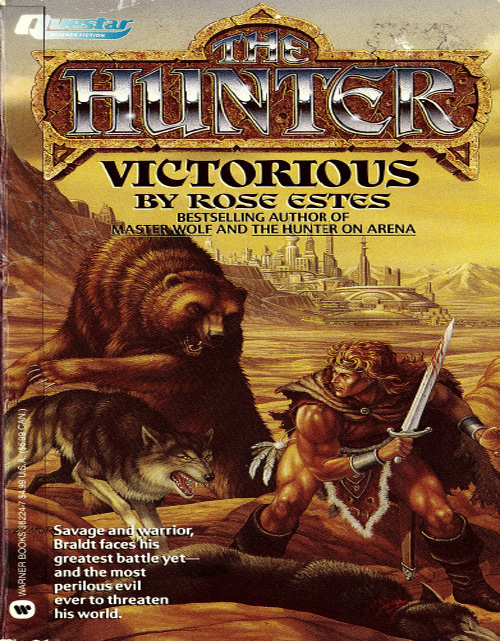 THE HUNTER
THE HUNTER ON ARENA

Questar® is a registered trademark of Warner Books, Inc.

They were gaining on him. Braldt’s breath came raggedly
as he dodged behind a clump of gorse and slithered beneath an overhanging rock ledge. He pressed his forehead against his
knees, shutting his eyes against the cold blue glare of the daylight, and tried to regain his breath and his composure.

They had been following him all morning since he had left the settlement, that architectural wonder of proud, soaring towers
and cantilevered stairs that seemed to float on the cold air. At first there was nothing in the pale empty sky. Despite the
fact that he had been here on Valhalla for more than two months, he had never grown accustomed to the absence of animal life.
Valhalla was an empty planet and other than the earthling colonists who had claimed it for their own, it had no natural life
other than flora.

Which made it all the more obvious when he spotted the first raven hovering above him on the rising wind currents. Not being
of the planet, the raven could only have come from the king Otir Vaeng, he who was the enemy. In time, the black bird was
joined by three others of its kind and throughout the morning they followed Braldt as he wandered over the steep, barren hillsides.

Only after he had crossed the sharp, serrated edge of the mountain range upon which the city was built had the others appeared,
stepping out from the shadows of the rocks and matching their pace to his.

He had tried to ignore them at first, telling himself there was no law that said he was the only one allowed to walk outside
the city walls. But they did not have the appearance of men out for a casual stroll. He was the object of their interest.
Not even the king would dare to kill him so close to the city … but who was to know? queried his inner voice. He would simply
meet with a mysterious accident, tumble off a ledge and fall to his death. Brandtson, his grandfather, and Keri, the woman
he loved, might suspect foul play, but they would never be able to prove it. Then, with Braldt out of the way, it would be
all too easy to dispatch the aging statesman and the helpless girl.

The men—there were six of them—increased their speed, gaining rapidly on Braldt and drawing their swords as they came, dispelling
any lingering doubts that Braldt might have had about their intentions. Dropping his knapsack of provisions and his cloak,
Braldt had begun to run at top speed, wending his way through the treacherous landscape with all the agility he had acquired
through years of rigorous training. The followers had increased their speed as well. They plunged down the slope, their passage
made all the more dangerous by a stretch of loose scree that made sure footing impossible.

The chase had gone on throughout the day and now, as the day approached its end, they were with him still and closing fast.
It was apparent from their grim silence and their tenacity that they would be content with nothing less than his death. Six
against one—not impossible odds, but difficult.

The days ended abruptly on this world, and the sun, always dim and casting little joy, slid quickly from view each night as
though begrudging the colonists what meager warmth it had to offer. The shadows lengthened farther, magnifying each object
as it was thrown into dark contrast against the cold, stony ground.

Huddled beneath his rock ledge, grasping for breath and for some plan that would save him, Braldt heard a chorus of eerie
screams rising into the chilly air. The hair on the back of his neck rose up at the ghastly sound, human voices wailing and
screaming, growing ever more agitated. There were no words as such, just unintelligible sounds, all the more terrifying for
their lack of intelligence. The screams increased in volume and frenzy until it seemed that they could go no further without
lapsing into insanity. Braldt gripped the hilt of his sword, guessing that the men were working themselves into a killing
rage before they rushed him. Abruptly, the ululations turned to howls, long, drawn-out moaning bays that had never been uttered
by a human throat. These horrible sounds were accompanied by fierce growls and throaty, raspy roars, equally inhuman. Braldt
was shaken; he stared into the growing darkness, wondering what was happening beyond his vision.

Suddenly he heard something, a scrabbling of rock just beyond the entrance to his hiding place. He started to draw his sword
from its scabbard, but before it cleared the mouth, a long, dark snout forced its way into the narrow space and wuffed a quiet
greeting.

Relief flooded over Braldt. He was no longer alone; Beast had arrived! He had ordered the lupebeast, his loyal and constant
companion, to stay with Keri until he returned. Braldt knew that she did not like to be left alone.

But Beast had a mind of his own and, while he had a certain fondness for Keri, his heart belonged to Braldt. Somehow he had
snuck out of the city and trailed Braldt to this place. Braldt smiled grimly as he hugged the coarse-furred lupebeast to him.
The odds had just gotten better.

His enemies circled the rock where he was hiding, uttering their unnerving cacophony of shrieks and howls and roars,
never silent, never in the same place. It was impossible to sleep and, as the chill of the long night settled in around him
like an old, familiar ache, he considered his options.

One, he could remain where he was and force them to come to him. There was a certain wisdom in this method, for he was well
placed with rock at his back and sides, and he could only be reached by his opponents placing themselves in danger. But if
he could not be reached, he would also find it difficult to inflict damage without showing himself. Stalemate.

Two, he could take the offensive and attack. Thinking themselves in a position of greater strength and knowing little of his
mind-set, they would not think him likely to choose this option.

Three, he could try to create a diversion, sneak past them and return to the city, leaving them to circle an abandoned rock.

Somehow none of his choices appealed to him; but maybe a combination of tactics… Braldt pondered his fledgling plan from a
variety of angles and thought that with a degree of well-deserved luck, it might succeed.

The rock beneath which he sheltered was like many of those that littered the mountainside, fractured and porous, brittle as
well as unstable in nature. A large buildup of rocky detritus was poised on the lip of the overhang, it would require little
to set it in motion. He studied the movement of the shadows. So far it appeared that his enemies were avoiding a direct approach,
but they would soon gain confidence and close in on him. He would have to act before they did.

He signaled Beast to remain in place and worked his way to the mouth of the opening. A thin cover of scrubby brush lent scant
camouflage, but it was adequate for his purposes. He sliced the edge of his tunic with his knife and tore a long
strip of fabric free. This he tied to a bit of brush, which he then buried carefully in the rock debris poised above him.
Beast growled, impatient with the enforced silence. Braldt knew that he would gain little advantage by waiting. Giving Beast
a hand signal, he flattened himself against the frigid ground and began to inch his way forward. Beast knew the command well
and obeyed without a sound, trailing Braldt like a shadow.

Braldt went no farther than the next outcrop, this a mere sliver of rock thrust sideways through the hard earth, but it would
do. Braldt freed his sword, taking care to muffle the metal against sound and hide it from the reflection of the rising moon.
His short sword and the unraveled bit of fabric he held in the other hand. He waited until Beast had fitted himself into the
last bit of shadow and then pulled the long strip of fabric.

The resulting clatter of falling rock was everything he could have hoped for and more. Evidently his small maneuver had triggered
a larger rock slide and the dark night reverberated with the sounds of stones and boulders plummeting down the steep mountainside.
At the first sound of movement, Braldt let loose a terrible shriek, as though grievously injured and in mortal pain. This
he followed with ever-weakening groans and cries for help.

For a time nothing happened. Then the first of his enemies circled in. Even though Braldt had suspected what he now saw, he
could scarcely believe his own vision. It was a wolf! Sleek and silent as the night, the others drifted in toward the abandoned
hiding hole, their sensitive nostrils casting about for the scent of their prey. Then, even as Braldt readied himself for
their discovery, the wolves parted to make way for an enormous black bear, who batted aside the rocks as though they were
no more than the weightless heads of flowers.
His snuffling growls could be plainly heard by the astounded Braldt and Beast, and his rank scent hung heavy on the chill
air.

Their trick would be discovered soon. Still uncertain about the true nature of his enemy, Braldt knew that he had to seize
the initiative while it lasted. Uttering a fierce clan call, he hurled himself from hiding, with Beast beside him, and flung
himself into the midst of the wolves, his great sword swinging.

One fell instantly, the sword slicing through the back of its neck, all but severing its head from its shoulders. A second
was skewered through the chest and shaken loose to writhe its final death agonies under the feet of its astonished companions.
A third, taken entirely by surprise, was seized in Beast’s powerful jaws, its throat spewing hot blood. Then the moment of
surprise passed and they were on him. The two remaining wolves immediately separated, spreading out to flank him on either
side. The bear, slower to turn and comprehend the situation, reared up on its massive hind legs, towering above them, jaws
agape and dripping with foaming slaver.

Beast dropped the lifeless body and launched himself immediately, again seizing his chosen target by the throat and wrestling
it to the ground. The wolf was the larger of the two remaining, outweighing Beast by a third of his body weight, but Beast
did not fight by ordinary methods. Lupebeasts were known for their strange habit of rising up on their hind legs to do battle.
It made them an even more dangerous adversary when facing humans, for it placed the double rows of serrated fangs and powerful
jaws at face level.

Braldt had never understood the technique’s value when fighting creatures of its own size until now. After a short scuffle,
Beast succeeded in locking his jaws around the throat of his opponent. This in itself might not have been fatal, for the wolf
had merely to fall on the ground and twist its body,
allowing its weight to break Beast’s grip. But even as the wolf carried out this ploy, Beast rose on his hind legs and the
abrupt, full-weighted drop tore the throat out of his opponent. The wolf fell to the ground, scrabbling in frantic circles,
silent, unable to voice its agony, as its lifeblood gushed away.