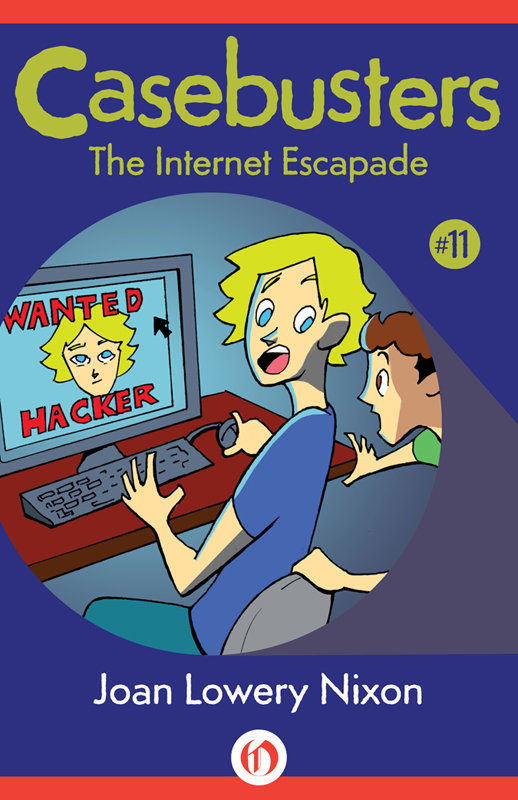 With love to the Brush family:

Special thanks to Dwight Silverman,

the
Houston Chronicle
’s technology writer, for his helpful advice. 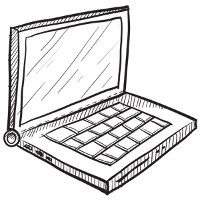 Sean pretended that he hadn’t seen Debbie Jean. But from the corner of his eye he carefully watched her walk through Redoaks Elementary School’s media center. Bossy Debbie Jean Parker was a real pain. Sean hated the way she always tried to find out what everybody else in class was doing so she could tell them how to do it. Sean held his breath as she came close. Would she … would she …?

As Debbie Jean pulled out a chair and sat in front of her favorite computer, Matt let out a snicker.

Sean poked him. “Don’t make her suspicious,” Sean whispered, but he wanted to laugh so badly he could hardly stand it.

Matt lightened up the computer screen again and began to type.

Debbie Jean scowled and muttered, “Something’s wrong with this computer.”

Sean clapped his hands over his mouth, but a small laugh burst out. Quickly, he turned and pretended to be reading the poster on the wall behind him. He was sure that Debbie Jean was looking at him.

As Matt kept typing, Debbie Jean leaned closer to the screen of her computer and stared at the words on it.

She began typing something on her keyboard, then stopped and frowned again. Sean’s stomach hurt, he wanted to laugh so much.

Debbie Jean grabbed the mouse and shook it. “This stupid computer is broken!” she cried. Jumping up, she knocked her chair over.

As she picked it up, she glanced at Matt and Sean, who quickly pretended to be reading something on their monitor. They waited until Debbie Jean stomped out of sight, then they broke down laughing.

“That was great,” Matt said. “We really fooled her.”

“What did you type?” Sean asked.

Matt grinned. “I wrote,
I’M A MAGIC COMPUTER. I’M GOING TO TURN YOU INTO A ROBOT, AND YOU’LL HAVE TO DO WHATEVER I SAY
. Then she wrote back,
THAT’S WHAT YOU THINK
.”

“She sure looked angry,” Sean said. “This is a great trick.”

“Yeah,” Matt said. “I’m glad that Dennis Taylor told us how to do it.”

Sean ran over to the computer Debbie Jean had used, cleared the screen, then hurried back to Matt. “Shhh!” Sean whispered. “Someone’s coming.”

Charlie, Sam Miyako’s little brother, came into the media center and sat at the computer Debbie had just left.

Matt began typing on his computer keyboard, but Sean said, “Let him alone. He’s not only our next-door neighbor, he’s just a little kid. Besides, Charlie gets spooked real easy. Sam’s always telling him scary stories.”

Charlie leaned forward to read the message on his screen and gasped.

“What did you write to him?” Sean asked.

“I wrote him,
I’M A MAGIC COMPUTER, AND YOU GET THREE WISHES
,” Matt whispered.

Charlie began to type with one finger, carefully hitting one letter at a time. The message slowly came up on the screen in front of Sean and Matt.

I WISH FOR A GIANT CANDY BAR, A NEW BIKE, AND A MONSTER UNDER MY BROTHER’S BED
.

Sean felt a pang of guilt. “Charlie’s going to be disappointed when he doesn’t get his wishes.”

Sean was intent on watching what Charlie continued to write:
I NEVER MET A MAGIC COMPUTER
… He jumped when a stern voice behind them said, “Sean! Matt! Turn around please.”

Mrs. Harrison, the school’s media specialist, stared down at them. “We had a complaint about one of the computers, and now I see why. Isn’t it amazing how your hands are off the keyboard, yet letters continue to appear on your screen?”

Sean could feel his face burn as Mrs. Harrison asked, “You crossed the wires, didn’t you?”

“Uh, yeah. We were kind of playing a trick,” Sean tried to explain. “We connected the monitor where Charlie’s sitting with this keyboard, and vice versa.” He couldn’t help smiling a little when he remembered how confused know-it-all Debbie Jean had looked.

Mrs. Harrison didn’t smile back. “I certainly don’t have to ask where you came up with this idea,” she said crossly. “Ever since the students from the junior high computer club began coming here as volunteers, you two have tried every computer trick the older students brag about. Well, this time you both go straight to the principal’s office. We’ll see what Mr. Burns has to say about this.”

“Yes, Mrs. Harrison,” Sean answered. He felt sick in the pit of his stomach. The trick had been so much fun that he hadn’t thought about what might happen if he and Matt were caught. He looked at Matt. Matt looked as if he didn’t feel very well either.

What was Mr. Burns going to do? 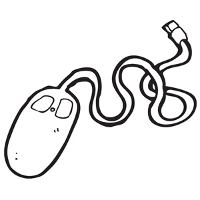 S
EAN AND MATT SQUIRMED
in the two large visitors’ chairs in the principal’s office, while Mr. Burns stared down at them from his height of six feet, two inches. Straining to look up that far made Sean’s neck ache. Mr. Burns was usually a smiling, friendly principal, but at the moment he wasn’t smiling and he didn’t seem very friendly.

“Just because there are pranksters in the junior high’s computer club, it doesn’t mean you have to copy them,” Mr. Burns said. “Mrs. Harrison was quite upset last week when you played—what was it—oh, yes, Color Nuts on the computers.”

Mr. Burns didn’t smile. He frowned at Sean and Matt. “How about when you set up a computer to read, ‘for more information press control, alt, delete’? What’s funny about that?”

“Uh, we thought it was funny when some of the kids from the computer club did it,” Matt answered.

“Unfortunately, our Redoaks Elementary students working on the computers didn’t think so, since the command turned off their computers and they lost all their work,” Mr. Burns said. “I hope you give some thought to the students you tricked today and either apologize or make it up to them by some act of kindness. I’ll give you a few days. Then I’ll expect you to report that the matter has been taken care of.”

As Matt and Sean left the office, Sean made a face. “I can’t apologize to Debbie Jean. It will make me barf.” He suddenly stopped complaining and began to smile. “ ’Course, if she happens to get in the way …”

The bell rang, and a door flew open. Sean and Matt had to jump out of the path of a trampling herd of first graders.

Charlie careened into Sean and tugged at his sleeve. His eyes shining, Charlie said, “Sean! Guess what? I got the magic computer!”

“Yes, there is, and it gave me three wishes. They’re secret, so don’t ask what they are because I can’t tell you or they won’t come true.”

As Charlie ran to catch up with his class, he shouted back over his shoulder, “But I can tell everybody I’m going to get my wishes!”

“What are we going to do about making it up to Charlie?” Sean asked.

“What Mr. Burns said. Tell Charlie what we did and apologize.”

“We can’t do that,” Sean said. “Didn’t you see how excited he was?” He thought a moment, then said, “Since he lives next door to me, it’ll be easy to make his first wish come true. I’ll get a big candy bar and hide it on his pillow, under the bedspread.”

Matt frowned. “A candy bar’s no problem. But where are we going to come up with enough money to get him his second wish—a new bike?”

“Uh, yeah. We’ll have to think about it, and about the monster, too.” Sean groaned.

“I know where we can get a monster,” Matt said. “We could buy a big ugly squid at the fish market and put it under Sam’s bed!”

Sean chuckled, but he said, “It won’t work. Think how the squid would stink. Mrs. Miyako would be mad at us for the next hundred years, and she’d call our mothers, and—”

During the last hour of school and all the way home, Sean tried to think of some way to fill Charlie’s order for a bicycle, but he couldn’t come up with a single good idea. However, as Sean entered the kitchen and flopped into a seat at the table, he saw that a package had arrived. It was from Grandma, who was on a spring cruise in Alaska. And the package had his and his brother’s names on the label.

Immediately feeling better, Sean tore open the box and ripped the paper off his package. He laughed as he pulled out a pair of bedroom slippers that were designed to look like huge, fuzzy bear paws, complete with yellow, curved claws.

Sean’s brother, Brian, didn’t get home from school until just a few minutes before Mrs. Quinn arrived home from her job at the advertising agency. Brian laughed at Sean’s slippers and admired the hand-carved totem-pole key chain Grandma had sent him. But his mind was on something more important.

“I’ve got some really great news,” Brian said. “I won the Top Student of the Month award at school.” Out of his backpack he pulled a certificate signed by the Redoaks Junior High principal and a fistful of coupons, which he tossed on the table.

Mrs. Quinn hugged Brian, saying, “Oh, Brian, I’m so proud of you! What a wonderful award!”

But Sean took one look at the coupons and yelled, “Bri, free ice cream and a free hamburger! And look! You’ve got free coupons for Monstermadness!”

“Two of them,” Brian said. “How about coming with me?”