The Jade Mage: The Becoming: Volume 1 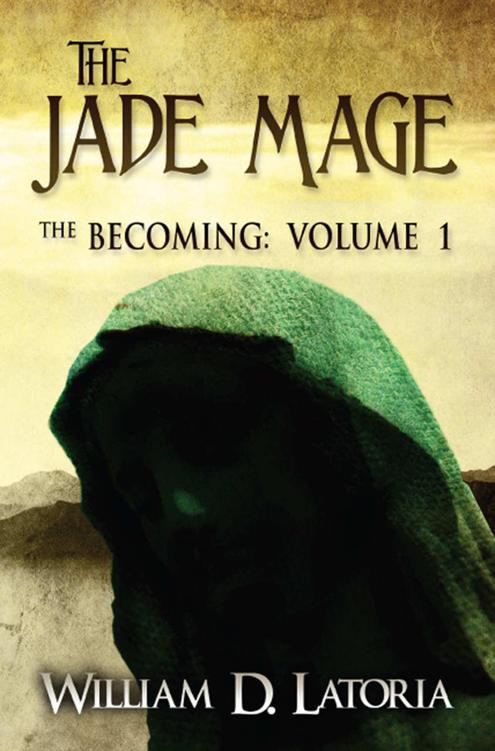 All rights reserved. No part of this book may be reproduced, stored in a retrieval system or transmitted in any form or by any means without the prior written permission of the publishers, except by a reviewer who may quote brief passages in a review to be printed in a newspaper, magazine or journal.

All characters in this book are fictitious, and any resemblance to real persons, living or dead, is coincidental.

America Star Books has allowed this work to remain exactly as the author intended, verbatim, without editorial input.

T
o my Wife and Grandma. You’ve both been there throughout this entire process and without both of you this book would never have seen creation. Thank you both for everything!

It was raining. It was raining hard. The sky was a depressed grey, even though it was noon by Tartum’s reasoning. He didn’t care, the rain suited his mood. The rain was coming down vengefully, which made digging hard. The digging had already been difficult because of what would be laid inside the hole once he finished his task. Tartum hurt. His neck, his arms, legs and back were sore from the labor...but that wasn’t what was hurting him. The pain that was hurting him came from knowledge. Knowledge that the hole he was digging would be the final resting place for his father. Tartum had found him in his bed this morning, dead.

It was apparent that he had died peacefully in his sleep. His father was lying there, perfectly still, with a relaxed look on his face. At first Tartum thought he was playing a joke on him. His father was usually not one for practical jokes, but every once in a while he would catch him off guard. Tartum shook the bed, threw off his covers, and even slapped him across the face trying to get some sort of reaction that would reveal the joke. It wasn’t until Tartum put his hands on his father’s body that the truth finally sunk in. His father’s skin was stiff, cold and clammy. He did not breathe, he did not move; his father, was dead.

Tartum had cried; and he had cried hard, he hadn’t felt loss like this before and didn’t know how to cope. He cried so hard that his body convulsed and his legs kicked out. There seemed to be no end to the pain that had sprung up inside him. Tartum didn’t know how long he was on the floor crying, when his mentor and friend, the magician arrived and put his arms around him. He had tried to offer any comfort he could to his pupil. After a while, the misery subsided. Tartum’s hysterical crying became sobs, which eventually dwindled down to hard breathing, and finally, the resolution to face the situation.

“That had all been this morning.” Tartum thought to himself, still digging. It felt more like years had passed since then. He had detached himself from the situation, making it feel like it was happening to someone else, even though, logically, he knew that wasn’t the case. The proof was wrapped in a blanket inside the house. Shuddering, he swallowed the lump in his throat to make it go away. Tartum redoubled his efforts with the digging.

He hit a tree root about a foot down and sighed. Removing the loose mud from around the root he saw it was a thick one that couldn’t be hacked through easily. Calmly, Tartum laid down his shovel and got a piece of barley out of one of his pouches. He metally prepared himself to cast the spell that would wither the root and allow him to continue digging. “
Polkak Sul-yuth
!” Tartum said while grinding the barley into the root. The magic took hold as he said the words, and the root began to wither just as Tartum knew it would. It was such a simple spell, no more powerful than lighting a candle or moving a leaf. It was “farmer’s magic” as his mentor called it. A simple spell, designed to kill off weeds and unwanted plants, yet the magic knew exactly what plant and how far to go with the killing. It was only useful for a farmer or a florist but Tartum enjoyed using the spell.

He resented being told he was only good enough to cast “farmer magic” so far. Why wouldn’t the magician teach him something more powerful; something substantial?! This thought in his head, Tartum looked up at his mentor, his friend, the magician, who sat under the tree that would be the only marker for his father’s final resting place.

Sitting against the tree, surrounded by a magical barrier that wouldn’t let the rain touch him, was the magician. “Isidor DuFop, the best magician this side of Saroth!” his flyers said. It was true, he made quite a handsome living performing his magic shows for the people. Tartum had learned everything he knew about casting from Isidor these past ten years. He’d been learning from his master ever since the day of his fifth birthday. Tartum liked Isidor very much; hells, he loved him like a father or a very close brother. Yet Tartum also resented him. He knew that the man was holding him back, not teaching him anything powerful or dangerous because, as he had said more times than Tartum liked to remember, “You’re not ready.”

The only spells he knew were mainly for general prupose needs. He could light a candle or set something small on fire with a word, kill plant life in part or in whole, mend his clothes, detect water, repair small tools like hammers or hoes, lift small objects and move them as long as they were no further than twenty feet from him, and extiguish small flames. The only spell Tartum thought of as “real” magic was his fire orb spell. It was also the
only
offensive spell he knew and it wasn’t very impressive. It consisted of changing rose petals into small orbs of white hot fire that he could send out at a target, to either kill or maim it, depending on the word of power he used. It was the one spell he knew that made him feel powerful when he used magic. And it was the only spell his mentor had all but forebidden him to cast.

Tartum sighed. He knew he was throwing a temper tantrum. His mentor had told him numerous times to stop doing it, and it was a habit he was trying to forget. He hated feeling sorry for himself. It made him feel weak and useless. However, today, it was hard not to. Here he was, three days from turning sixteen, and burying the only member of his family he had ever known. Swallowing another lump, Tartum felt another wave of sorrow crash over him as the rain soaked his spirits even further. He knew if he kept this up he would succumb to his misery and never finish his task before the rain filled his hole. Concentraiting, he tried not to think of magic or his father or Isidor. Instead, he thought about how much more water than mud he was throwing out of this grave.

It took most of the afternoon, with a small mudslide creating another hour of work in the muck when he finally decided it was done. Not a great job, but considering the conditions, it wasn’t terrible. His father’s grave was about three and a half feet deep and six feet long. It would have to do. His father wouldn’t mind. He was beyond mortal concerns.

The thought caused another lump to creep up Tartum’s throat and angrily, he swallowed it. He had enough crying today. In fact, Tartum decided in that moment, he hated crying and resolved never to do it again.

“Good.” Tartum thought “There shouldn’t be any sun. The world doesn’t deserve the sun today.”

With a heavy heart, Isidor looked at his young friend. He could see how difficult this was for Tartum, and yet he was proud of him for how well he seemed to be handling it. Even with the rain and the miserable weather, Tartum had been able to continue digging until the hole was sufficent. Isidor thought about offering to use magic to assist but decided against it. The physcial labor of digging was a perfect way to burn through the emotional pain of loss. So Isidor had sat there under the tree, watching his pupil dig, silently deciding what to do with Tartum, now that he had no real ties to the town.

Tartum couldn’t talk. He was very close to breaking his resolution, and it took all his will to resist. He shook his head and then stood there looking at the grave.

“Would you mind if I said something?” Isidor asked, placing his hand on Tartum’s shoulder.

Tartum shook his head again and shrugged off Isidor’s hand. He didn’t want to be comforted. He wanted to be alone. He wanted everything to just go away. He hated his father for doing this to him, for dying before he was ready! He hated the world for being so unfair. He hated Isidor for his sympathy. He hated everything, and in that hate he found strength. He held on to that hate and coveted it. He wanted to be strong, he wanted to be strong not only in magic but in spirit. Tartum hated feeling weak and miserable, but right now those were the only things he could feel. That is, until he got angry. The anger was like a flood of fire inside him burning away the pain and the weakness. It gave him the strength to keep going and replenished the will that his weakness was trying to take from him. Tartum needed the strength now and so, focused hard on his anger. It was working.

Taking his silence for permission, Isidor put his hand over his heart, and bowed his head. After a moment, he began to speak; “Here lies Bertem Fuin. Father to Tartum Fuin. Bertem was a good man, a man of simple mind and simple life. He loved his woman and lost her young. He raised his son well and farmed his lot in life. He accomplished little, but that which he did accomplish, he did well...and for that we ask that his final rest be a peaceful one. May he find comfort with those that went before him and help prepare the way for those to come. Rest in Peace Bertem Fuin, your time is done.”

Isidor looked at Tartum and saw the internal struggle going on within him. “How hard this must be for him.” he thought. Sighing, he put his hand on Tartum’s shoulder, firmer this time. Tartum looked up at him as if he didnt recognize him. Isidor understood.

“When you’re ready, you know where I’ll be.” Isidor said.

He left Tartum standing over the grave of his father. Left him to fight his interal struggle alone, as a man must fight these battles. He wondered how his young friend would be changed by this experiance. He worried it might be for the worst. Tartum didn’t handle difficult emotions well. He turned to look at Tartum one last time, as the sun was setting. He saw him still looking at the mound that covered his father’s body, still unmoving, still fighting.

Tartum stood there going over everything that had lead to this moment. How he met Isidor and how his life had changed, in their chance encounter. He remembered it all began with his birthday, a magic show, and an over excited five year old boy...