Read The Journeys of a Different Necromancer Online

The Journeys of a Different Necromancer 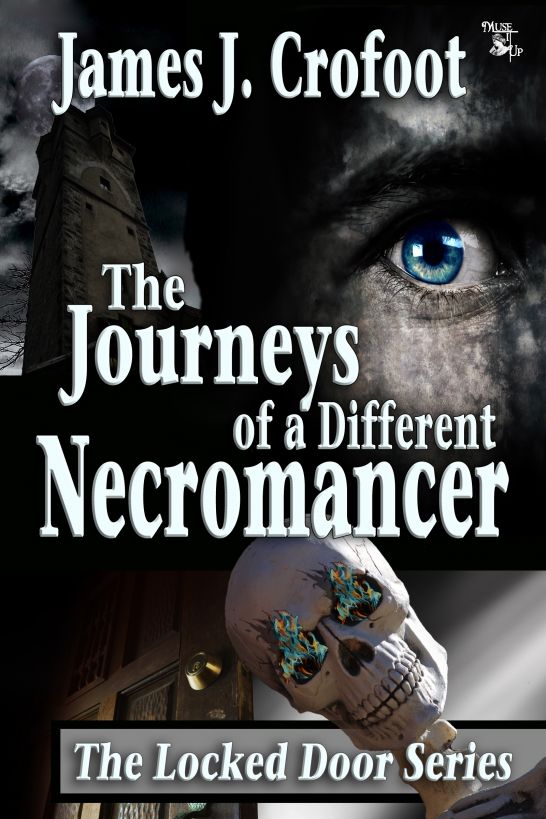 Thomas wanted to learn to
read and write, things only Xavier the Necromancer could teach. But
Thomas learned much more. He learned to raise the dead. Then, with
his knowledge, he set out for the distant sea. Along the way, he
made an army, encountered a dragon, and fought thieves by the
score. But, could he continue to use the knowledge Xavier gave?
Could he hold to his teacher's views that all people were
self-centered, greedy, and jealous of him for being so much better?
Could he return to the obsidian tower to live a life where the
world was locked out, where his teacher had kept all life away to
simply be left alone? Where no one ridiculed and beat him for being
different? Could he return to a life where only the undead, his
risen, kept him company?

The Journeys of a Different
Necromancer

Published by MuseItUp Publishing at
Smashwords

This ebook is licensed for your
personal enjoyment only. This ebook may not be re-sold or given
away to other people. If you would like to share this book with
another person, please purchase an additional copy for each person
you share it with. If you're reading this book and did not purchase
it, or it was not purchased for your use only, then you should
return to Smashwords.com and purchase your own copy. Thank you for
respecting the author's work.

To Kathy, for the
computer

“
Go on, Thomas,” urged Brandon. “You’re a baby if you don’t.”
He rose to his knees and puffed out his chest with self-importance.
“On your thirteenth birthday you must raise the dead. That’s the
law.”

Thomas’s blond-haired head poked over the hill the three boys
hid behind. “Waking the Dead” was a rite of passage for a boy in
his village. It consisted of knocking on the door of the dark
magician’s tower, counting to ten, and then running away. If
caught, he would turn into a mushroom or lizard, unnatural things
for a boy to be.

The tower itself stood forty feet tall with a base of about
thirty. Before their parents were born, the magician used dark
stone blocks to build it. In the clearing where it stood, only a
few twisted and stunted trees grew.

No one saw the man inside, except on those rare occasions when
he came to the village for food.

Thomas had seen him on one of these rare occasions. Normally,
parents pulled their children inside when he came, but Thomas hid
once, eager to study this man the whole village seemed terrified
of. From the bushes, Thomas watched.

This dark magician was old and bent, his face gaunt, his long
hair and beard unkempt. The man walked as if there were nothing
wrong with everyone running into their houses, barring every door
and window and anxiously waiting for him to leave. He went to the
storehouse, grabbed a bag of grain, put his coins on the barrel
beside the door, always two gold, and left.

What did the old man do that made them so afraid, Thomas
remembered thinking.

Thomas never told a single soul about that time, not even his
friends here with him today, Brandon and Spencer.

Well, today he would find out what the old man knew. Over the
hill he went.

Upon reaching the ancient door of oak and iron, the portal
scared by the decades of sun’s heat and storms’ beating, he
knocked. Thomas felt a great change about to take place, but he
needed to know what secrets lay on the other side of this
threshold. The count passed but still he stood there, wanting to
know what secrets lay inside. Brandon and Spencer yelled for him to
run, but he only knocked again. Thomas could hear a door slam on
the other side of the door through the small, barred window just
above his head.

Someone walking down stairs, someone coming closer. The door
groaned on its hinges as it slowly opened and there stood the bent,
gaunt old man. His hair and beard still in an unkempt manner, his
clothes still dirty and torn. Now, with the old man closer, Thomas
smelled death.

Thomas could see the inside of this mysterious place. Stacked
on the shelves lining the walls and on a table that stood in the
middle of the floor, the boy saw what he thought people called
books, a word he learned from a passing merchant once.

“
What do you want?” the old man asked with a scowl.

“
Sir.” Thomas made a clumsy bow. “I was curious to see what
was in this great place and also to meet you. You don’t seem all
that dangerous to me. May I come in?”

The man scowled some more and walked away, leaving the door
open.

Several hours later, Thomas stood at the edge of his small
village, just looking at the houses where everyone he had ever
known lived. He then tilted his head to gaze up at the full
moon.

His parents would never agree, but he had to get out of this
speck of a place, too small to even have a name. How would he see
the kingdom, or Targon, its capital, if he could not read and
write? He needed to learn the things only Xavier could teach him.
Knowing the task would not be easy, he would already be in trouble
for being so late, with a steadying breath, he walked to the place
he called home.

“
I went fishing, Mum,” Thomas said upon being questioned as to
his whereabouts.

“
And who did you go with?” she questioned further. “Your
friends, Brandon and Spencer? They were home hours ago. And where’s
the fish?”

Thomas looked at his da, smoking his pipe at the table. He
sighed and sat down across from the man.

“
Well?” his mum said, banging his wooden plate of stew down on
the table in front of him.

Thomas glanced at his da again; his blue eyes looked back at
him from under a mop of unruly blond hair.

“
Answer your mother,” his da ordered.

“
I was with Xavier,” Thomas replied. With head bowed, he
stared at his stew, sensing he would not be allowed to
eat.

“
Who?” His mother’s voice. Her angry, high-pitched
voice.

Thomas looked up at his father to see a pipe halfway to a
gaping mouth. “Xavier, you know, he lives in the tower. He wants to
teach me to read and write. He wants me to be his
apprentice.”

His mother sat down and stared at him.

“
He’s got lots of books, scores of them. He showed me a book
with lots of animals in it.”

His da sat back in his chair, silent. His mum folded her hands
in her lap, also silent.

“
Think of it,” Thomas continued excitedly. “Think of the
things I could do if I could read. I could go and work for the
prince in Targon, I could see the whole kingdom.”

The boy gazed down at his untouched food. It smelled good
and looked even better, but his father had spoken. Thomas got up
and climbed the ladder to his loft. Deep into the night, even after
his parents stopped their whispered arguing, he lay in bed thinking
of the map Xavier had shown him of the kingdom. He would find a
way. He would be…what word had Xavier used? Necromancer. He would
be a necromancer and he
would
see the whole kingdom.

In the morning, Thomas awoke to the smell of porridge. Having
had no dinner the night before, he hurried down the ladder. There
he found his da already eating. His mum ladled his share into a
bowl and then got some for herself.

“
We’ve decided you may learn to read and write. None of that
dark stuff, though. You hear? No digging up of graves,” his da
said. “We want more for your life, Thomas. Now then, what does this
friend of yours want in return? We can’t afford to pay anything. I
suppose he mentioned a price.”

Thomas looked at his mum as she sat down. She folded her hands
in her lap and remained quiet.

Da wiped his mouth with his sleeve. “Then we’ll give it a try.
Only til ’arvest, though. You’ll be needed in the fields then.
Anything after that and we’ll see.”

“
No good will come of this,” his mum remarked. “Mark my words,
that man never did any good for anyone.”

Thomas finished his breakfast in a gulp and got up to run from
the house. He stopped just outside the door to pick up his favorite
stick and heard his da say, “I want better for him, Sonya. This
life is no life for my son. He’s smarter than this.”

A month passed and Thomas studied. He studied geography; the
world turned out to be a lot bigger than he imagined. He learned
arithmetic, how to count to a thousand. Then moved on to reading
and writing, eight to nine hours a day he went through the books
and scrolls. On the second and third floors of the tower stood
skeletons of various animals, there he learned science, anatomy,
and biology.

The fourth floor, however, Xavier said he needed to learn a
good deal more before being ready for that.

“
The villagers are
shunning
me,” he said to Xavier one day after
learning the word. “They whisper about me whenever I pass. Even my
friends. Yesterday I waved to them and started walking, to tell
them what I was learning, and they turned their backs and ran
away.”

Xavier looked up from the book he held. “People, for the
most part, are very small-minded. They
shun
what they do not understand or things that
are different.”

“
Was that the way it was with you when you first started
studying to be a necromancer?”

“
People always thought me to be a little different. Look,
Thomas, you will see more, you will do more, than they can imagine
in their empty heads. You will learn to create life from
death.”

Thomas thought about these words for some time. He wanted to
do more than just plant and harvest. He wanted to travel this
world, especially the sea to the west, to see more than just this
tiny village too small for a name. He decided he liked being
different. He was already learning more than they ever would. Did
not that make him better?

Then the day came when the rider from the prince arrived. The
army of Kross marched against the kingdom and the prince wanted
everyone to come to the capital city of Targon to defend it and
protect him. It caused uproar. “Why isn’t the prince defending our
homes and crops?” they wondered. Then the idea of Xavier defending
the village came to mind. The more they thought about this, the
more adamant they became. He must do something for them, they
allowed him to live so close, practicing his evil magic and putting
them in danger for all these years!

The boys of the village approached Thomas first, catching him
on the way to the tower; four days after the message came. They
surrounded him.

“
You and your master must do something to protect us, Tom,”
Spencer said.

Thomas looked around apprehensively at the boys. Weren’t these
his friends? What had he done to deserve such hateful ways? Maybe
they were jealous. He learned to spell that word a few days
before.

“
We don’t want to leave our homes and lands. We’ve worked hard
for these crops ready to bring in. You expect us to just give them
to the soldiers of Kross?” Ronald asked. Ronald stood over him by a
foot and had three years on Thomas as well.