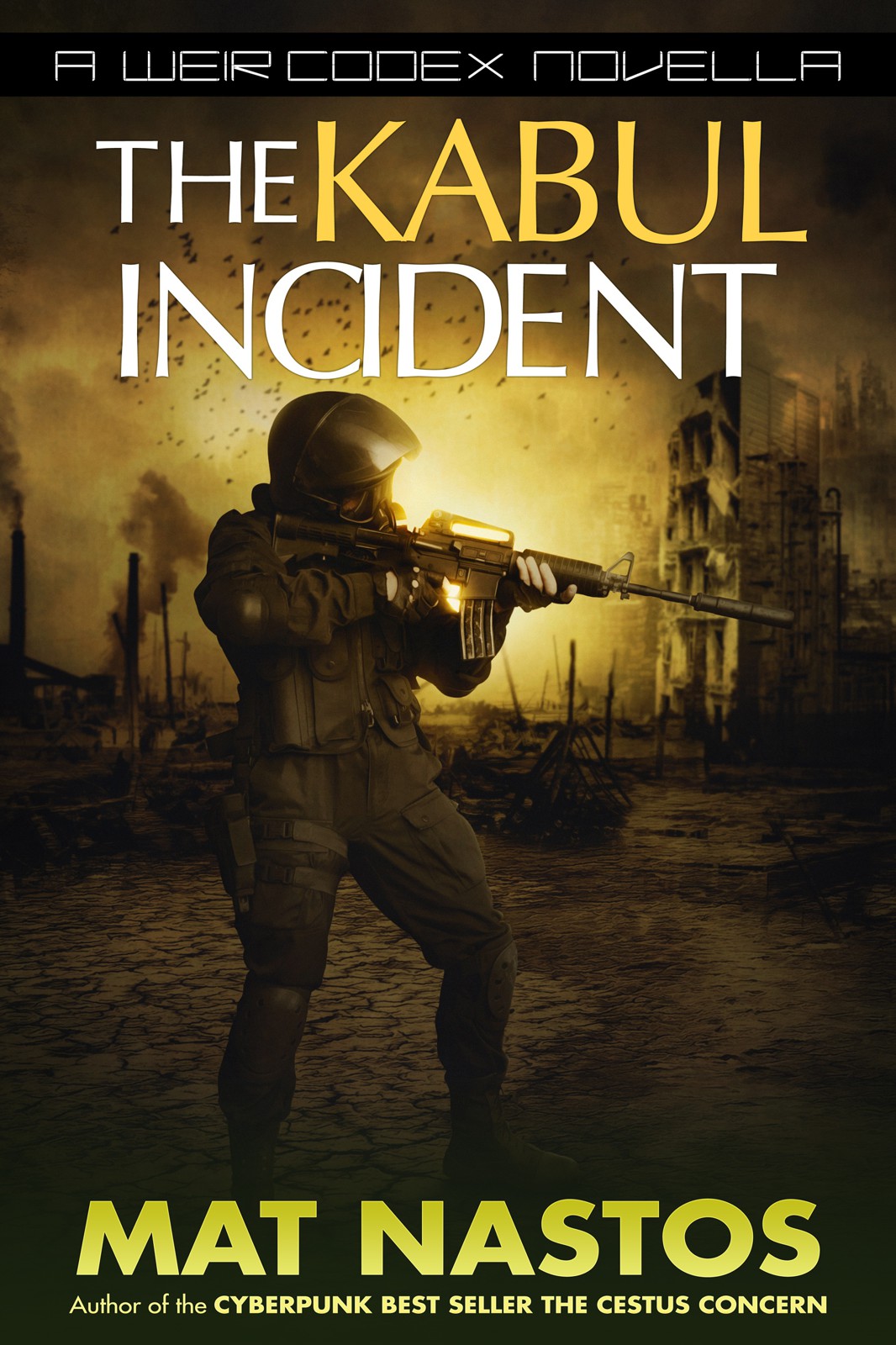 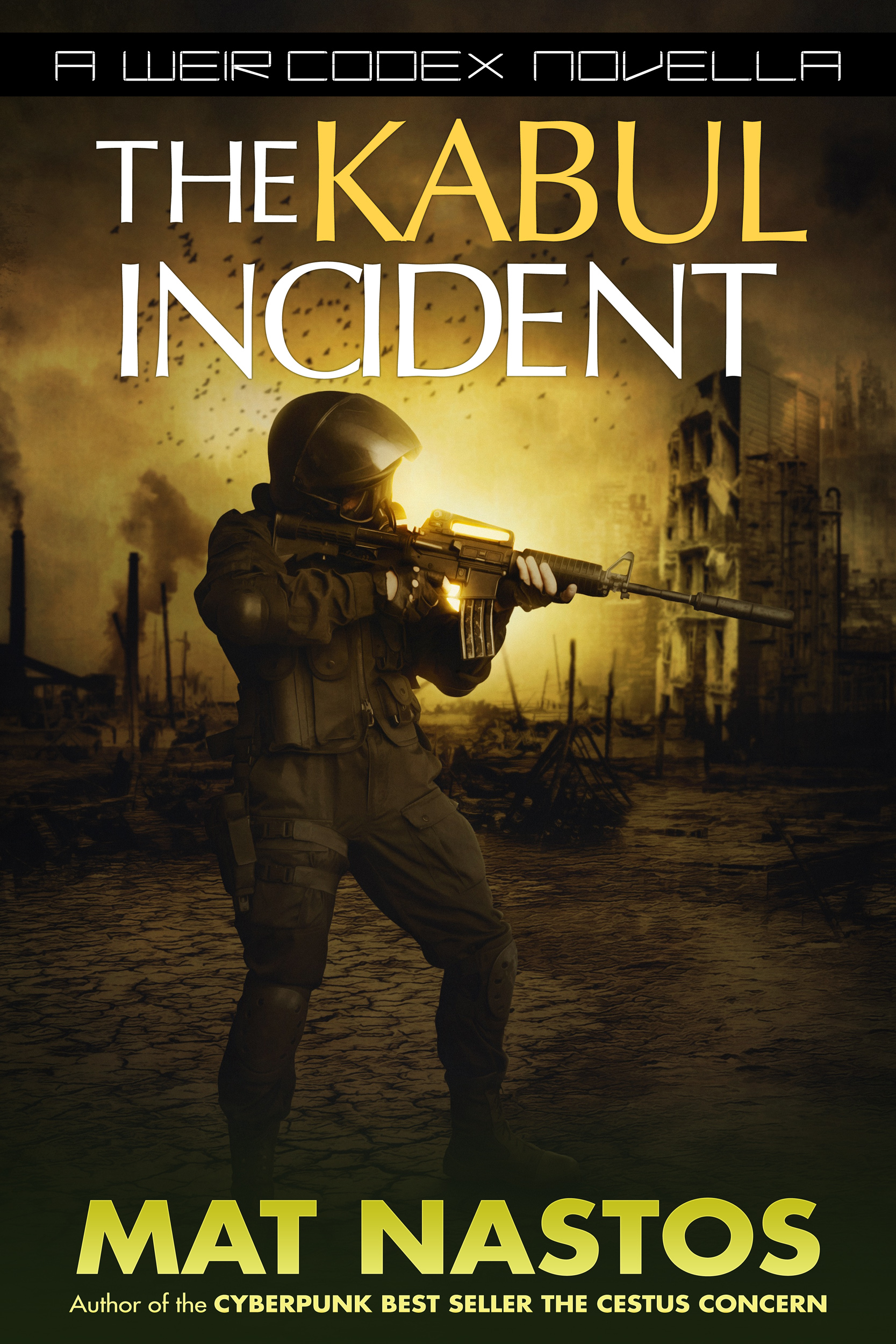 Man With The Iron Heart (novel)

CHRONICLES OF THE WALKER

Cora and the Clockwork Men (short)

Frank Versus The Vampire (short)

Make sure to check out the other books in the Weir Codex.

“First time on nanny duty?” The boisterous voice startled Engineer First Grade Scott Brazier out of the wide-mouthed stupor consuming every ounce of his attention since he geared up back in Berlin. The only thing keeping the modestly built, blond-haired man with shining white teeth from being the perfect poster-boy for ‘Stranger in a Strange Land’ was the lack of a Japanese made camera strapped around his neck…and, truth be told, Brazier was pretty sure the quartermaster back at Ramstein Air Base had stuck one of those in his pack somewhere. Heck, he had just about everything else jammed into the fifty pound black nylon backpack currently wedged down between his legs.

Bright hazel eyes flashed out from beneath the thin, pale brows that gave little in the way of protection from the harsh Central Asian sun. A half squint finally allowed Brazier to locate the owner of the voice. “Excuse me?” he asked in a way that labeled him one of the few non-military types assigned to the top secret operation deep within the heart of Afghanistan.

The burly soldier seated diagonally across from Brazier in the back of the half-covered armored trooper carrier grinned widely from beneath deep chocolate skin tinged with a hint of redness from the blazing Afghan sun. It took Brazier a second to make the man’s name out—the name tag sewn onto the left breast of his black tactical uniform had come lose, causing the right edge to flap freely in rhythm to the bouncing wheels of the massive vehicle the group rode in.

Gunnery Sergeant Ray Height echoed back, “Nanny duty? Your first time keeping eye on one of the
Pinos
?”

A quick nod and sideways glance down the row of men seated next to him was all Brazier gave the jovial United States Marine in response. He was already uncomfortable enough with being pulled away from his nice air-conditioned cubicle in Project Hardwired headquarters back in Los Angeles and thrown onto a series of military planes with hard seats and no drink service for thirty-six hours. There was no way he was going to make things worse by telling the hardened soldiers around him that it was the first field operation he’d ever been assigned to.

Signing up for field work had looked good on paper—increased pay, higher likelihood of promotion…and the added boost to his rep back at HQ didn’t hurt. Looking back on things, though, Brazier quickly admitted that the videos and virtual reality sims he’d run through did absolutely nothing to prepare the Springfield, Illinois-native for the heat, the bugs, or the smells that had assaulted him since touchdown two hours earlier.

Leaning down and whispering, Height answered, “Pinocchios…toy boys. You know…” A thick thumb jerked its way towards the rear of the vehicle and a pair of men dressed from head to toe in high tech tactical gear outlandish enough to make James Bond soil his panties. “Designates.”

“Yes. I’ve done monitor duty from remote locations on a number of operations, but this is my first time on the ground.”

“Which one is yours?”

Brazier scrolled his gaze towards the back of the fifteen ton MRAP vehicle and the unusual quartet of men arranged in two rows near its exit hatch. The first two, seated at full attention and seemingly completely unaware of their surroundings, were of no consequence to the government engineer. The large white letters emblazoned across their black helmets and along the upper portions of their equally dark shirt sleeves proclaimed what they were: GMRs of Rho-Team. Nearly mindless automatons in direct control of Project Hardwired’s mainframe and overseen by the boys back in the weapons division. Rho-Four and Rho-Five were grunts, operating under a hive-mind system and had no need for a monitor agent. The third man, a tall, broad-shouldered blond man with wavy hair and a gleaming chrome right eye was more interesting.

Designate Gauss was one of twelve Prime Units created under the auspices of Project Hardwired—the entire reason the project had been formed nearly a year earlier. He was a cybernetic soldier. Hardwired’s executive director, Gordon Kiesling, had often called Gauss and his half-machine brothers the ‘future of warfare,’ and Brazier wasn’t one to disagree with the man who signed his paychecks. Large portion’s of Gauss’s body and brain had been replaced by the sort of cutting-edge technology the common United States citizen assumed was relegated to science fiction novels or Michael Bay movies. The twin, mirror-like metallic arms mounted onto where Gauss’s original human appendages had been, allowed the soldier to generate magnetic fields intense enough to warp steel or even lift a sedan over his head. If the reports Brazier had reviewed were accurate, on a recent mission to Switzerland, Gauss had torn a five ton bank door off its settings. The man, if he could still be called such a thing, was an absolute brute.

In spite of his nearly unfathomable power, Gauss wasn’t Brazier’s focus. The magnetically-enhanced cyborg was under the care of the thin engineer’s field counterpart, Grace Talborg. Seated across from him, Talborg hadn’t looked up from her small computerized tablet once since they had unloaded from the massive military jet that brought them from the civilized world into the heart of dust and improvised explosive devices. The athletic woman with her thick mane of golden, wavy hair, gave every iota of her attention to the constantly scrolling stream of data being sent to her from the computers housed deep within Gauss’s brain. Brazier’s immediate superior back at Project Hardwired, the handsome Jason May, had regaled all the boys in engineering with tales of a stormy late-night liaison with the woman, but he doubted the veracity of such tales. She was beautiful, she was focused, and she was about as warm as a frozen TV dinner.

Brazier had to admit that in spite of the rather enticing way the perspiration flowed down Talborg’s neck and disappeared down into the intriguingly tanned skin peeking out from beneath two unfastened buttons, the thing taking up most of his time and attention since he’d gotten word of his assignment sat with one hand gripping the rear access point of the MRAP and the other hovering just over the trigger of the SCAR-H assault rifle resting across his lap.

Designed as the ultimate urban warrior, Designate Cestus had been created to be a perfect silent killer and assassin. Enhanced strength, speed, and senses were just the tip of the iceberg. The main weapons in the cyborg’s arsenal, aside from the knowledge of every form of armed and unarmed weapon combat his personality had been programmed with, were the twin silver and gun-metal gray mechanical arms surgically grafted to his body. Unlike Gauss, whose arms were highly polished chrome in appearance, the ones merged into Cestus were rougher, sharper, and deadlier in appearance, containing a utility-belt worth of vicious killing implements within that would have made Batman green with envy. Blades, garrotes, pneumatic darts, and more were all housed in the thick cabled machines. From the reports, Cestus’s weapons of choice were the ten-inch, razor-sharp titanium claws his fingers could transform into with a thought. The brown-haired former US Army Ranger enjoyed doing his killing up close and personal.

Eyes the color of frozen blue ice flashed, locking the curious engineer in their sights, nearly startling him out of his seat. Brazier’s face flushed a deep red. Somehow the cyborg had sensed he was being watched. The engineer’s mind ran down the list of abilities Designate Cestus had been given in his upgrade from normal soldier and came up empty with a practical explanation for the detection. A weak smile drew itself across his lips as he tipped his head in greeting to the man he’d be monitoring on the upcoming mission. A dismissive snort from the handsome, rough-hewn face of the super solider was the only response given to Brazier before Cestus returned his attention to the outside.

“Designate Cestus,” Brazier finally answered Height’s question, more than a little unhinged by his interaction with the living weapon he’d been assigned to.

“OOooo…you drew the short straw on this mission, huh?” The comment from the over-sized marine drew a horrified expression from the civilian.

Sergeant Height laughed loud, grabbing the attention of nearly everyone seated in the transport. Only the eyes of the focus of Brazier’s mission, the man codenamed Designate Cestus, remained locked on the scenery whipping past at nearly sixty miles per hour. The only things giving any indication that Designate Cestus was awake at all were his eyes constantly scanning and analyzing every inch of the surrounding landscape. From his briefings on the combat abilities of Cestus, Brazier knew the cybernetic warrior was reaching out with senses far beyond those possessed by mortal men. He was on full alert even as he sat still amongst a group of fellow warriors.

Cestus was every inch the weapon of destruction he’d been created to be. Alert and ready to kill at a moment’s notice.

Shuddering, Brazier returned his attention to the Height.

“From what I’ve seen, the other Pinos don’t like that one much.”

Confused, Brazier pressed the talkative soldier for more details. The engineer had watched countless hours of the various Designates in action on a number of ground ops, but he’d never seen…or even considered…what the personal interaction between the cybernetic super soldiers would be like. No one at Project Hardwired viewed the men as anything more than tools…weapons to be deployed when needed and put away, hidden from prying eyes, when they weren’t. The idea the Prime Designates might be more was intriguing to the man.

“Your man Blades is a total wipe.” This was old news to Brazier. Designate Cestus’s recruitment into Project Hardwired had been a rocky one and the man’s base personality had been erased. Whoever Captain Malcolm Weir of the Third Battalion, Seventy-Fifth Ranger Regiment had been in his life before Project Hardwired, he was gone now, replaced by a personality construct created by A.I. mainframe in charge of maintaining and managing all the Prime Designates of the ultra classified governmental branch.

Fire Season-eARC by David Weber, Jane Lindskold
To the Ends of the Earth by William Golding
Bad Penny by Sharon Sala
Frayed Bonds by Diana Thorn
Last Days of Summer by Steve Kluger
Wife or Death by Ellery Queen
The Liar's Chair by Rebecca Whitney
Air by Lisa Glass
Trial and Terror by ADAM L PENENBERG
Alien Love Too! by Boswell, Lavenia