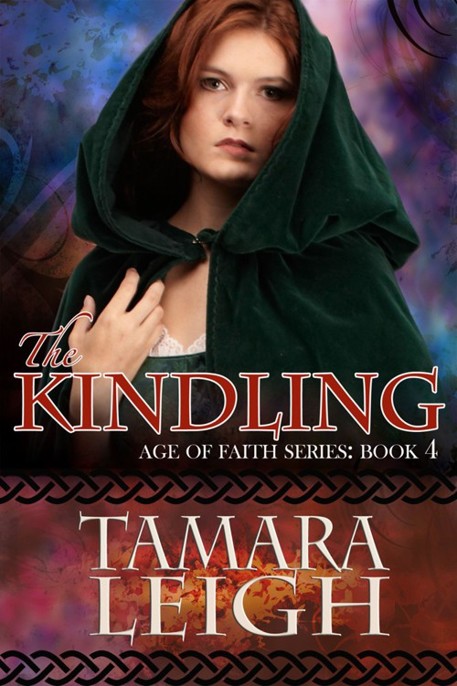 Book Four in the Age of Faith series

The Unveiling,
The Yielding,
and
The Redeeming
introduced readers to the formidable Wulfrith family during Duke Henry’s battle for the English throne and his succession.
The Kindling
, the fourth book in the Age of Faith series, is the story of Sir Abel, the youngest and, perhaps, most dangerous of the Wulfrith brothers.

Helene of Tippet is not her father or her brother’s keeper. Yet when she is enlisted to use her healing skills to aid a fallen knight, the secret she holds close threatens to visit her family’s sins upon her. Now she is in danger of loving where she should not—a man of the nobility, and one who has cause to despise her if ever he learns of the blood that courses through her veins. Dare she reveal herself? Dare she trust a warrior so bitter and intent on revenge? Dare she love?

Sir Abel Wulfrith, a man bred to battle, has the scar to prove one should never trust a woman. But when he is wounded by his family’s enemy, he finds himself at the mercy of one who could prove his undoing. Now he faces a battle against which no strategy can prevail, no blade can defend, no heart can escape unscathed. Can he forgive Helene the sins of the father—more, the sins of the brother? Can he reclaim his faith? Can he love?

*
Virgin Bride
is the sequel to
Warrior Bride

This novel is a work of fiction. Names, characters, places, incidents, and dialogues are either the product of the author’s imagination or are used fictitiously. Any resemblance to actual events, locales, organizations, or persons, living or dead, is entirely coincidental and beyond the intent of the author.

All rights reserved. This book is a copyrighted work and no part of it may be reproduced, stored, or transmitted in any form or by any means (electronic, mechanical, photographic, audio recording, or any information storage and retrieval system) without permission in writing from the author. The scanning, uploading, and distribution of this book via the Internet or any other means without the author’s permission is illegal and punishable by law. Thank you for supporting authors’ rights by purchasing only authorized editions.

We really must set a date for a girl’s night in front of North & South.

Castle Soaring upon the Barony of Abingdale, England

She came to him in the still of a night whose dark edges were beginning to fray.

As she opened the door wider, the better to see him where he lay upon the bed with arms and legs thrown wide as if to test the reach of the mattress, the hinges gave a betraying creak. She winced.

She should not be here, for if he awakened he would likely think she had come to offer comfort between the sheets. However, despite the long journey that had delivered her to Castle Soaring well after the setting of the sun, she was unable to sleep. And all because of this man.

Drawing a slow breath, more for courage than fear she might rouse him, she stepped forward and frowned over the dust and stale scent that rose from the rushes. The floor covering ought to have been replaced days ago, but from the bits of ‘this and that’ picked up from the castle folk, the state of the chamber was the fault of its wrathful occupant rather than neglect of his care.

Still, she was prepared—or would soon be—for what she would face in a few short hours when she stood before this possibly dangerous man.

She halted an arm’s reach from the bed and, by the glow of a brazier that would not much longer warm away the chill, considered the figure atop the rumpled bed coverings.

If not for a tunic splayed open at the neck and twisted around his upper thighs, he would be bared. However, she was not alarmed by his state of undress. Not only did her profession as a healer require her to be well acquainted with the human body, but it was told that he had been given a sleeping draught. Of course, lest he was near the end of its influence, she would do well to proceed with caution.

She took a last, heedful step forward and looked closer upon the leg nearest her. Not even the brazier’s dim, forgiving light could disguise the severity of his injury—nor that he had begun to waste away during all the weeks abed. She reached forward, only to draw back. She was here to look, not touch. Touching would come later.

Moving toward the head of the bed, she caught her breath as the rushes crackled beneath her feet, then stilled when a growl sounded from the one she trespassed upon. However, when she peered into his thin, coarsely bearded face, she saw no reflection of light to indicate he had arisen from the depths of the sleeping draught.

Noting the tension in his jaw and neck, she guessed he dreamed dreams he did not wish to have unfold within the darkness of his mind, and was tempted to try to awaken him. But it would be a mistake. Blessedly, it was not long before he relaxed.

Though she would have liked to familiarize herself with the injuries to his torso, she was fairly certain he was not wearing braies, and she would not risk having him awaken to find her peering beneath his tunic. Since his right hand was too deep in shadow on the opposite side to verify its injury without moving it, she also let it be. Fortunately, there was enough light on his face that, when she bent close, the injury inflicted by a cruel blade was well enough told.

“Dear Lord,” she whispered and, too late, sealed her lips. However, her softly spoken words seemed not to penetrate the fog that provided the rest he needed to heal.

Pressing her fingers into her palms to keep from tracing the stitched flesh that cut a path from his left eyebrow to the outer corner of his eye to the lower edge of his jaw, she lingered over his face though she had done what she had come to do.

If the unsightly scar were allowed to heal properly, its appearance would greatly improve. Too, once he began to eat regularly and resumed exercise, the hollow and angular planes of his face would fill in. But even then, would he ever resemble the man she had known, if “known” could be used to describe their two brief encounters? Of course, she also knew him by way of a boy who missed him more than was good for so young a soul…

She closed her eyes. This warrior who believed he would never again wield a sword ought to have stayed in her past. Had his brother, Baron Wulfrith, and her liege, Baron Christian Lavonne, not asked this of her, she would not have had reason to see him again. And she wished she had not, though not because it made her ache to gaze upon his disfigurement. Her longing to remain as firmly in his past as she wished him to remain in hers had more to do with who she was and who, even if not by his own hand, had done this to him.

He made another low, throaty sound, and distress once more hardened his face. This time it was accompanied by an increase in the rhythm and strength of his breathing. This time it did not soon resolve.

Go. They are his demons to undo, not yours.
At least, not directly…

His uninjured leg kicked out, head snapped toward her, and lips drew back to reveal clenched teeth. But still his lids remained lowered, eyes moving rapidly beneath them. As she continued to ignore the good sense that urged her to depart, perspiration broke upon his brow.

She bit her lip. Though she could abide the suffering of others as was required of one who earned coin as she did, still it caused the soft places in her to ache.

“Nay,” he rasped, his voice so tight she did not recognize it as the one she had known when his life had been different from what now made his heart beat.

His breathing took the next turn with greater speed. “Cease!”

They are not your demons
, she reminded herself, and yet she laid a palm to the uninjured side of his face, bent nearer, and whispered, “They are slain, Sir Abel. Pray, leave them be.”

His breath that moved the tendrils of hair escaping her braid stopped and, as she berated herself for being so foolish, his right hand shot up and captured her wrist. Though she felt his fingers convulse, they did not turn tight around her. And she understood the reason just ahead of the impulse to wrench free that might have undone the healing of his hand.

Dreading what she would see, she raised her head. The light reflected in his eyes causing her heart to lurch, she braved a face so contorted that the anger with which he had regarded her nearly two months past seemed hardly anger at all.

“I…” What? Was there any way to excuse her presence that would not further enrage him? Surely he would—

The pressure of his hand eased and, though his eyes remained open, he seemed to stare through her. Was he yet dreaming?

She forced herself to remain still, hoping he did, indeed, see something beyond her, praying he would sink into a restful sleep.

At last, his lids lowered, as did his hand, drawing hers downward until her palm lay against his chest. Beneath it, she felt the work of his heart that, beat by beat, transformed from a rushing river into a calm stream.

Back aching, legs beginning to cramp from holding her bent position, she tried to pull her hand from beneath his, but he pressed it tighter to him.

The King's Commission by Dewey Lambdin
The Rabbit Factory: A Novel by Brown, Larry
Going Geek by Charlotte Huang
The Dangerous Lord Darrington by Sarah Mallory
Complicated: A Tainted Love Novella by Ghiselle St. James
MenageLost by Cynthia Sax
In the Darkness by Karin Fossum
The Streets of Ashkelon.azw by Unknown
Forever. (This. Is. Not. Over. Book 3) by Shannon Dianne
Dog Gone by Carole Poustie