Read The Knight and the Seer Online

The Knight and the Seer 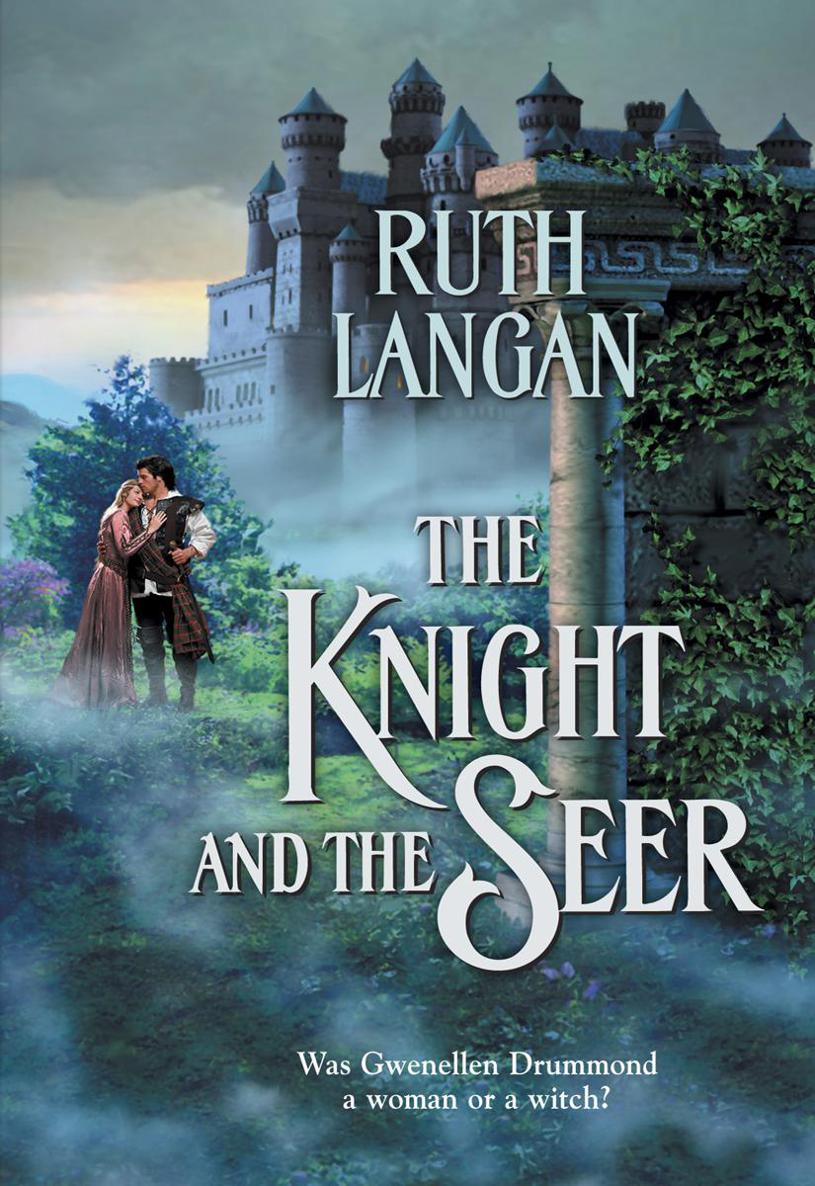 “So. They left one of their number behind. Prepare to die, woman.

“I am Andrew Ross and this is my castle. Tell me quickly who you are and what you do here.”

“My name is Gwenellen. My home is in a land known as the Mystical Kingdom.”

That had him releasing her and taking a step back. “I’ve heard of such a place. All Highlanders have heard the tale. But it is no more than a myth.”

All too real, Andrew thought as he was forced to absorb a strange rush of heat that nearly seared his flesh. He pulled away as though burned and looked down to see if she’d left a mark on him. Though his skin was without blemish, he could still feel the tingling all the way to his fingertips. “How do you come to be here? Have you brought witchcraft to this place?”

The Knight and the Seer

“Ruth Langan is a true master at involving your emotions, be they laughter or tears.”

“…another tautly written, fast-paced and sensual romance. A fine example of

why this author is such a successful romance writer.”

“Ruth Langan makes us believe in the beauty of true love.”

“…characters so incredibly human the reader will expect them to come over for tea.”

THE KNIGHT AND THE SEER

Most Recent Available titles from Harlequin Historicals and RUTH LANGAN

The Courtship of Izzy McCree
#425

For Patty, our gifted artist,

who colors all our lives with love.

And, of course, for Tom, who paints with laughter.

“N
ow stand right here, Jeremy.” Nine-year-old Gwenellen, of the clan Drummond, helped the little troll onto a flat rock before taking several steps backward. She had the look of a pixie, with fine golden curls spilling down her back in tangles, and laughing eyes the color of warm honey. “You have to hold out your hands like this…” she lifted her hands, palms up and waited for him to do the same, “…so you don’t miss any of the flowers I’m going to send you.”

Catching the look of disbelief that passed between her older sisters, Kylia and Allegra, who were standing to one side, the little girl huffed out a breath. “I know what you’re thinking. Just because I’ve made a few…missteps before, you think I can’t ever get these spells to work. But this time I’ll prove you wrong.”

“And if you don’t?” Allegra, the oldest of the sisters at ten and three, had hair the color of fire and green eyes that danced with amusement as she studied the troll dressed in his top hat and frock coat, who looked like he’d rather be anywhere than here, as the object of her little sister’s experiment. “Poor Jeremy is the one who’ll find himself flying backward, or tumbling down a well.”

“Aye.” Kylia, a year younger than Allegra, with raven-black tresses and eyes the color of heather, nodded. “Or hanging from the very top of a tree, or sailing across the sky. And all because of your missteps.”

Gwenellen’s face grew redder with each mention of her many accidents. She was their despair and their delight. Despite her many failures, she never doubted that she would one day master the skills necessary to be a witch like her mother, grandmother and sisters.

The troll, Jeremy, was no bigger than a wee lad, his head barely reaching their shoulders. He claimed to have lived in the real world for more than a hundred years before making his home in the Mystical Kingdom with these lasses and their family. From the beginning he’d been especially fond of Gwenellen, whose sweet nature made it impossible not to love her, despite her imperfections. Though he wasn’t known for his patience, he’d shown a great deal of restraint while the little girl practiced her spells and talents, usually with disastrous results.

“He was never hurt.” Gwenellen shot a pleading look at the troll. “Tell them, Jeremy. None of my missteps ever caused you harm.”

“So far.” His voice resembled the croaking of a frog. “But be careful, my little friend. This time I’d prefer the petals to the thorns.”

“Aye. I’ll keep that in mind.” She turned to her two sisters with a haughty look. “We’ll just see who can conjure the prettiest roses in all the land.”

Tossing her hair back from her face she lifted her arms heavenward and assumed an air of great concentration before beginning to chant the ancient words. Though she paused a number of times as her tongue twisted over an unfamiliar word or phrase, she doggedly continued to the end before calling out triumphantly, “I bid thee now, from thy sweet bower, send me down the loveliest flower.”

A single angry dark cloud gathered overhead, followed by a rumble of thunder that brought Gwenellen’s mother, Nola, and her grandmother, Wilona, racing across the meadow, with Bessie, the hunched old crone who was also part of their family, trailing behind. Everyone looked up at the sky expectantly just as the cloud opened up and spilled its contents over Jeremy.

Instead of flowers, they watched as he was covered with a white, powdery substance that mounded around his feet, spilled over his top hat, coated his clothes, and sent him into a fit of sneezing.

Gwenellen stood perfectly still as the others raced to Jeremy’s side and began to dust him off. As they did, Allegra and Kylia started giggling.

“You think this is amusing?” The little troll’s ruddy face grew as dark as the storm cloud that had now blown away.

“It isn’t you, Jeremy.” Allegra dipped a finger into the powder and tasted it before falling into the grass, convulsed with laughter. “It’s just that Gwenellen came so close, this time.”

“Close?” The little girl was fighting tears. “How can you say such a thing? What I wanted was rose petals.”

“Not roses. Flowers,” Kylia said, between snorts of laughter. “You asked for the loveliest flower. And what you got was…” She could barely speak over the laughter. “What you got was flour. Fine, milled flour.”

The two girls continued giggling while Jeremy stared in disgust at his top hat and frock coat, covered with white dust.

As for Gwenellen, she plunked herself down in the grass and rested her chin on her clenched fists, blinking back tears.

When the others had scattered, Wilona sat down beside her granddaughter, while Nola stood with her hands on her hips, regarding the two of them. “Another misstep, my darling?”

The little girl nodded. “These spells are so easy for the rest of you, Gram. Why are they so hard for me?”

The old woman drew her granddaughter close and pressed a kiss to the top of her head. “You just need time to uncover your gifts, Gwenellen.”

“Your father?” Wilona drew back and shot a glance at Nola. “When did he talk to you?”

“Last night. I was having trouble sleeping, because of that little…misstep I had yesterday.” She steadfastly refused to call them mistakes, insisting that they were mere miscalculations.

Wilona thought about poor Jeremy, paddling furiously at the bottom of the well, and shouting at the top of his lungs to be rescued from Gwenellen’s latest attempt at a spell. He would have hardly referred to it as anything but a catastrophe.

“Are you sure it was your father, my darling?”

Gwenellen nodded. “He looked so tall and handsome, with his plaid tossed over one shoulder, and the glint of a jeweled dirk at his waist.”

Nola dropped to her knees and touched a hand to her daughter’s arm. There was a new urgency to her voice. “What color were the jewels?”

“Deep, dark red, like blood, Mum. Except for the middle one, that was as green as Allegra’s eyes.” The child turned to her grandmother. “And a lock of his dark hair spilled over his forehead just so.” The little girl touched a finger to the old woman’s brow.

The two women went very still. Gwenellen had just described her father perfectly, even though she’d never seen him, for he’d died before she was born. He was a mortal who had defied his clan to marry Nola, knowing she possessed powers that were frowned upon by his people. Yet theirs had been a true love-match, and until the day he died, he’d made her life unbelievably happy.

“What did your father say to you, lass?”

Gwenellen’s smile returned. “He told me that I had a gift. A very special gift which no one else in the Mystical Kingdom possessed. He said that it could not be used here, though he didn’t say why. But he told me that when I leave our kingdom and go into the world of mortals, it will hold me in good stead.” She looked over and saw the way her grandmother was looking at her. “What is it, Gram? What’s wrong?”

Wilona brushed her hand down the child’s hair. “There’s nothing wrong, my darling. Your father is right. Your gift is very special indeed. And one day, in the world of mortals, you’ll discover just how important it is. Now go and make peace with Jeremy.

When the little girl skipped away, Wilona got to her feet. “You know what this means, don’t you, my daughter?”

Nola seemed almost reluctant to admit it, even to herself. “No wonder her gift isn’t apparent here in the Mystical Kingdom, for there are no graves here.”

“Aye. But in that other world, she will be able to speak with all their cherished dead.”

“It is a rare and precious gift.”

The older woman looked thoughtful. “And one that is often misunderstood.”

“We must shield her, and see that she never strays from the Mystical Kingdom.”

With a sigh Wilona drew her daughter close. “It’s impossible to shield her from the world, my child. What we must do is help her find her strengths so that if she should ever find herself away from here, she’ll be able to survive.”

The object of their discussion danced across the meadow in search of her playmate. She would need a great deal more practice before being called a certified witch like her sisters. But it would happen, she vowed. She would just have to work a little harder.

And find a way to stay in Jeremy’s good graces until she succeeded.

Seeing her daughter tumbling from the sky had started Nola’s heart drumming like a runaway carriage. It was nothing new. It seemed to her she’d spent a lifetime worrying about this free spirit who was always getting herself into trouble. But every time it happened, her heart seemed to die a little. “Let me take care of your cuts first, child. That was a nasty fall you took.”

Never Too Late by RaeAnne Thayne
The Seven Streets of Liverpool by Maureen Lee
Finish What We Started by Amylynn Bright
GIRL GLADIATOR by Graeme Farmer
She's Got Game by Veronica Chambers
A Burned Out Baker: Classic Diner Mystery #7 (The Classic Diner Mysteries) by Beck, Jessica
Forty Words for Sorrow by Giles Blunt
Second Thyme Around by Katie Fforde
Defying Eternity (An Obscure Magic Book 5) by Viola Grace
The Year of the Crocodile by Courtney Milan