The Landfall Campaign (The Nameless War) 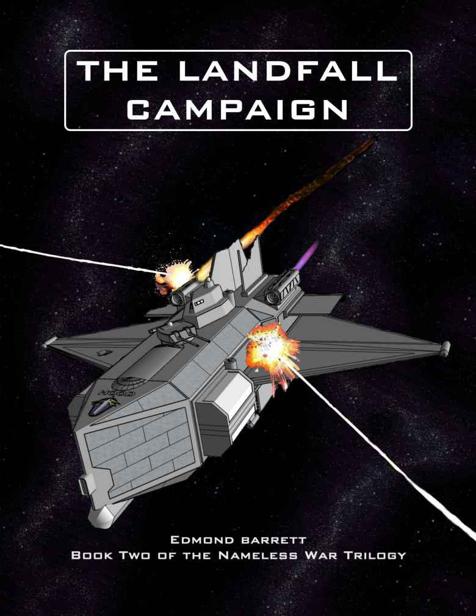 All rights reserved. Except for use in any review, the reproduction or utilization of this work in whole or in part in any form by any electronic, mechanical or other means, now known or hereafter invented, including xerography, photocopying and recording, or in any information storage or retrieval system, is forbidden without the written permission of the author

This is a work of fiction. Names, characters, places and incidents are either the product of the author’s imagination or are used fictitiously, and any resemblance to actual persons, living or, business establishments, events or locales is entirely coincidental.

With thanks to my parents for their support, to my test readers Phil and Peter, my editor Jan and Sorcha for her encouragement.

View From the Sidelines

The Day Before The Storm

The Breaking of the Line

View from the Sideline

The sun crested the Mountains of Hetori, bathing the mighty Ormy Rift Valley in its soft violet light. On the far side of the valley, the House of Speakers, home to the government of the Aèllr Confederacy of Worlds, stood backed up to the very edge of the precipice. Halfway up the sheer east wall of the building, a balcony projected out above a one thousand-metre drop to the floor of the valley.

In the eyes of many Aèllr, it was the most beautiful view anywhere in the Confederacy and as with every morning, Prime Speaker Unqin was there to greet the rising sun. As always, she felt her spirits lift and her sense of balance return as she gazed at the untamed beauty of the valley below. To her left and right, government buildings lined the edge of the rift as far as the eye could see.

Closing her eyes Unqin shifted pigmentation to allow her skin to soak up the sun
’
s rays. As she stood there absorbing the sun
’
s energy, Unqin allowed her mind to drift, to consider the day ahead, and its possible problems and solutions. Much of the day would be taken up with routine matters, but the first item was far and away the most important.

Behind her, inside the building there was a tap at the door. A moment later Unqin
’
s assistant stepped in.

“
Speaker, Fleet Commandant Icro has arrived. Should I send her in?
”

“
Please do,
”
Unqin replied, without moving.

After a few moments the Commandant stepped into the room and closed the door quietly behind her.

Icro did as she was asked and for a time the two of them stood silently on the balcony.

“
So, I understand that a ship arrived from the border region. It brought news I presume?
”

“
That is correct Speaker. The vessel was a fast messenger ship that was deployed out on the frontier for urgent communications. The area commandant judged the information vital, an analysis I agree with. Speaker, the humans are now at war with the faceless ones.
”

Unqin
’
s head dipped until her breathing vents rested lightly on her chest.

“
Has the accuracy of your information been confirmed Commandant?
”

“
Yes Speaker. Our worst fears on this matter have come to pass,
”
Icro replied sombrely.

Unqin
’
s sense of oneness disappeared. With a sigh she turned and entered the office. Icro followed and seated herself.

“
Tell me everything Commandant.
”

“
Thirty days ago, the Faceless - or the Nameless as the humans prefer to call them - opened their war against humanity. They attacked the base the humans call Baden. They destroyed it, dispersing the fleet stationed there. They then mounted an offensive on Earth itself in a clear attempt to win victory at a single stroke.
”

“
Have they succeeded?
”
Unqin asked with alarm.

“
The situation is not clear. The time lag due to distance is working against us, Speaker.
”

The Commandant looked somewhat evasive, with her skin turning to a mottled shade that suggested discomfort.

“
Commandant, that seems a somewhat vague answer,
”
Unqin observed.
“
Is it not the case that your division can read both the human radio signals, also their faster than light transmissions? Wasn
’
t the frontier decoding station constructed at considerable expense for that very purpose?
”

“
What you say is in partly correct but regrettably the situation has now altered. We no longer possess the means to read intercepted communications,
”
Icro admitted.

“
The timing of this seems strangely unfortunate, Commandant.
”

“
It
’
s no coincidence Speaker. In the opening days of the conflict our information gatherers noticed a shift in the coding protocols of the human Battle Fleet. It took a number of days for the protocols to be adopted by their entire fleet, but once done our access to their communications was removed. We surmise that the humans had a contingency plan in place to negate any pre-war decoding. Regrettably they succeeded.
”

Unqin sat silent for a time.

“
Is any pertinent information source still available to us?
”
she eventually asked.

“
Human commercial and some of their governmental transmissions remain open to us Speaker,
”
Icro replied.
“
Regrettably however, the quality of information from these sources is poor and in time I expect that even these will be lost to us.
”

“
I see.
”
Unqin considered what she had heard so far before looking once more at Icro.
“
When will we once more be in a position to read their communications?
”

“
I have studied as much human military history as I can Speaker. The humans have much experience on matters of coding, principally how much of a disadvantage one side will be put at if their enemies can read and discern the meaning of their communications. We have striven to unlock the human codes, while they in turn have worked to keep us out. In this matter they have been more successful. Our former access to their communications was the product of three years diligent labour. It is impossible to say when, or even if, that doorway will once again open itself to us.
”

“
It concerns me greatly that we are losing such information at a time when our need is greatest Commandant. All efforts must be made to restore access. Putting this aside for a moment, tell me what you know, what you suspect.
”

“
The humans have avoided immediate destruction. The opening move by the Faceless has failed.
”

The Commandant
’
s reply was flat and lacked explanation or the subtle flow of Aèllr wordplay. Unqin was shaken by realisation that her military commander was frightened. Rising from her seat she returned to the balcony. The beauty of the mountains and valley remained the same but to her eyes seemed diminished. The Commandant followed her out to gaze down on the valley.

“
Answer me this. Measured against the strength of the Faceless, is the victory or survival of the humans possible?
”

“
We have studied the problem as much as the available information allows. The conclusion reached has not been favourable. It is our belief that the humans cannot win the war they now find themselves fighting.
”

“
It is my recollection Commandant that the same was said when we fought the humans, yet we were proven wrong.
”

“
The Faceless are not the Aèllr. They share not our fears, nor our beliefs or values. They are not constrained as we were. For that reason alone, they will defeat the humans. The humans will fight, it is what they excel at, but this time they will be defeated. We both know that when the humans have been wiped out, the Faceless will without hesitation turn upon us.
”

Unqin did not reply. She stood eyes closed, facing towards the mountains.

“
Speaker, our people are not prepared for another war and our fleets are not ready. I need the passage of another ten years. No less.
”

Unqin did not answer immediately. The Commandant waited patiently.

“
More information must be sought before we can find a way through. I can see that we have a measure of time in which to work; it is my hope that a way to avoid being drawn into this conflict will open itself to us. I will detain you no further Commandant.
”