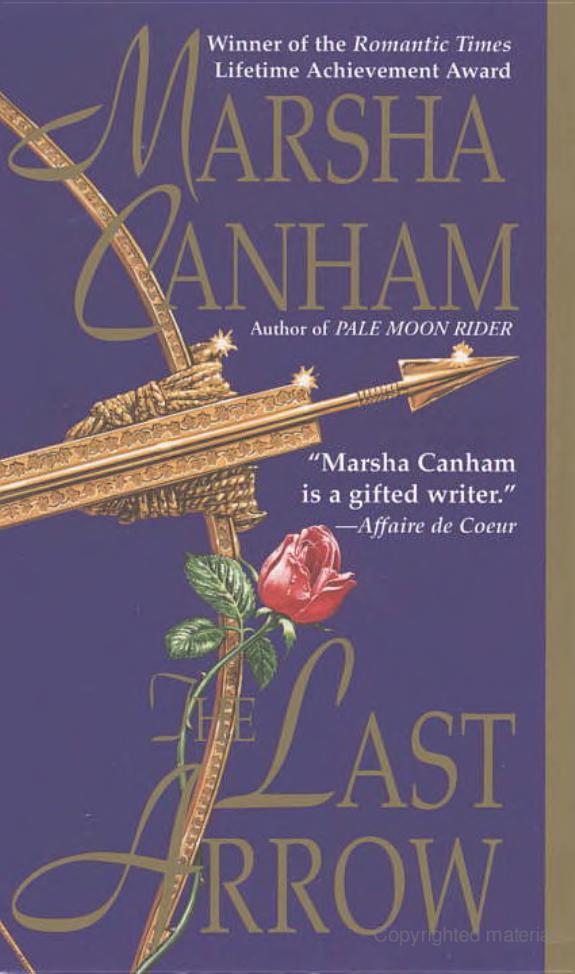 "I AM NOT AFRAID OF YOU, GRIFFYN RENAUD.'

"I did not say you were afraid of me." A darkened spiral of hair had sprung forward over her forehead and he brushed it aside with a breath of a kiss. "You are afraid of this," he whispered, trailing the caress to her temple and down to the curl of her ear. "And this." He bent his head and she felt the black silk of his hair on her cheek. His lips were on her throat, in the crook of her neck, and she closed her eyes, her breath coming even hotter and faster than before. Her heart beat with a wildness that frightened her, and she felt as if she were standing on the edge of a cliff, the hypnotic lure of danger pulling her forward and the safe sanctuary of solid ground calling her back.

"How ... can you expect me to believe you?" she gasped. "After everything that has happened ... the lies, the dis-honesty, the cruel games—"

"That night we spent together at Gaillard was no game."

With her tears spilling faster than she could blink them free, she watched the dark outline of his face bend toward her.

ACHIEVEMENT AWARD, AND HER PREVIOUS NOVELS:

ACROSS A MOONLIT SEA

"CANHAM AT HER BEST ... No one tells a swash-buckling tale like she does. The pages snap with witty dialogue and rich, detailed description."—Affaire de Coeur

"[A] TEMPESTUOUS, ADVENTUROUS AND RIP-ROARING HIGH SEAS ADVENTURE ... Marsha Canham ensures herself a place as queen of romantic adventure."—Romantic Times

"A FIRESTORM OF DANGER AND DESIRE." —Romantic Reader

STRAIGHT FOR THE HEART

STRAIGHT FOR THE HEART GOES STRAIGHT TO THE READER'S HEART with its winning combination of an absorbing romance and fascinating characters. Marsha Canham has another winner with this dazzling novel that readers will savor."-—Romantic Times

IN THE SHADOW OF MIDNIGHT

"DEFINITELY ONE OF THE BEST NOVELS OF THE YEAR . . . Marsha Canham has written a fast-paced, action-packed medieval romance."—Affaire de Coeur

"Ms. Canham skillfully blends a great deal of historical detail into this scintillating tale of brave men fighting for justice and the women who share their dreams."— Romantic Times

"DRAMATIC AND SENSUOUS ... MARVELOUS ... OUTSTANDING ... A tale of grand proportions... Top-notch from start to finish!"—Rendezvous 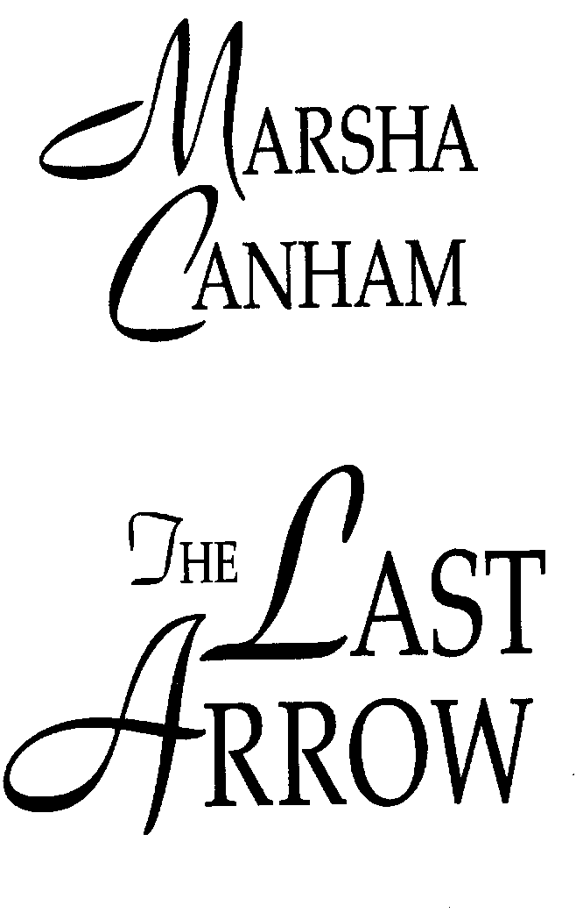 If you purchased this book without a cover you should be aware that this book is stolen property. It was reported as

All rights reserved. No part of this book may be reproduced or transmitted in any form or by any means, electronic or mechanical, including photocopying, recording, or by any information storage and retrieval system, without the written permission of the Publisher, except where permitted by law.

The trademark Dell® is registered in the U.S. Patent and Trademark Office.

About eight centuries ago, an unknown bard sat under a tree in the vast expanse of Sherwood Forest and composed a ballad about a hooded outlaw who robbed from the rich to give to the poor. How could he know he was creating a legend? This book is dedicated to him, and to all the writers before and since who have made history an exciting and romantic visit in our imaginations.

Marienne FitzWilliam had blossomed into a beautiful young woman. Because she had not taken any vow of seclu-sion, she was often sent to the market in Nottingham to trade the linens woven by the nuns of Kirklees. It happened one day, she was caught in a circle of sunlight, frowning in concentration over a selection of needles and spindles, when the bored and lecherous eyes of a town official came to settle on the abundance of glossy chestnut curls. His name was Reginald de Braose and he was in the service of the Sheriff of Nottingham, Guy de Gisbourne.

An ugly man, short of height, overbulked in stature, de Braose's face was ravaged with the scars of a childhood disease. One eye was coated in a milky-white film, red-rimmed, and leaked fluids that more often than not were left to dry to a yellow crust in the corners. His hair, brown as dung, lay in greasy spikes against his neck and poked out from beneath the battered iron dome of his helm. His armor was not the finest. He wore no coif to protect his neck—

not that any common man would be fool enough to attack him. His mail hauberk bore definite signs of combat and was ill repaired in the sleeves and hem; a sorry chain of broken links hung like a frayed iron thread down his thigh.

The surcoat he wore was dull blue with more patches stained from food and drink than were clean. His hose bagged at the knee. The blade of his sword was pitted and chipped and betrayed no gleam, not even in the bright midday sun. He looked to the left and to the right, casually nodding to the half-dozen soldiers who lurked in the shadows.

Only one was too preoccupied to nod back. He had a hand down the front of a blowsy wench and was too busy fondling and pinching to notice his captain's glare.

De Braose and his men had been at the market since dawn. It was the fourth Saturday they had been up before the crowing of the rooster, turned out of warm beds with empty bellies and foul tempers; this day, like most others, they had positioned themselves at various vantage points in the market square watching for strangers, following them, hoping one might lead them to rich rewards. This was not the first time de Braose had seen the little dark-haired maid. She lived and worked for the nuns at Kirklees Abbey, but she was the most interesting morsel to come into view so far since the villagers had taken to hiding most of their wives and daughters—even the ugly ones—

whenever there were soldiers around.

Yeomen and peasants had started taking to the forests as well, especially those likely to be picked up by the soldiers and dragged off to the castle for work details. Overtaxed and half starving, they hid what little of value they had; it was up to the king's men to find it and pry it out of them by whatever methods they deemed necessary. Men forced to work in the castle could pay a fine and free themselves. Women forced to whore could pay a fine—after their usefulness was fully exhausted—and return to their mud-and-wattle homes. Those who thought to struggle or resist found themselves missing ears or fingers, toes or tongues by way of example to others. It was the same everywhere in England. The king's treasury was empty and he demanded it be filled. Whether he had to steal taxes from the rich or bleed it from the poor, it mattered not so long as his stores of jewels and gold were replenished.

In the eleven years since he had taken the throne, John Plantagenet had emptied the treasury many times over. He had lost the hereditary Angevin lands in Normandy and Brittany to his ineffectual leadership, and turned most of the English barons against him by using cruelty, repression,

And murder as a means of ruling. Anyone who possessed anything of value found himself robbed of it, or fined for having it. The king's men scoured the land, inventing new tortures, confiscating properties, ravaging women, and more and more nobles were questioning their wisdom all those years ago in having supported John's claim to the throne when they might have had the young and malleable Arthur of Brittany.

Their self-doubts only raised more rumbles of dissent. Where was Prince Arthur? What had happened to him? What had happened to his sister Eleanor? They were the offspring of John's older brother Geoffrey, and, by right of succession, Arthur should have inherited the throne upon King Richard's death. Instead, John had snatched the crown for himself and had thrown Arthur and his sister in prison. Neither had been seen since. There had been rumors and speculation, of course. A body had been found floating in the River Seine not six months after Arthur's disappearance. Badly decomposed, it could not be readily identified, but it had bright golden hair and the scraps of clothing it wore were of the finest, richest quality. Then and now there were murmured convictions that John had had his nephew murdered, even that he had committed the abhorrent crime himself in one of his fits of rage.

As to the sister Eleanor, she had simply vanished off the face of the earth. There was one whispered tale of her confinement in Corfe Castle, of a daring rescue staged by unknown knights, but the whispers faded when it came to the end of the tale. If she had been rescued, where had she been taken? Who could have possibly kept her hidden for so many years, and why, why, when England was embroiled in civil unrest, would she not have been brought forth out of obscurity to lay her rightful claim to the throne?

The king was well aware of the resentment and hostility brewing around him. He had tried, and failed, to gather an army this past spring to cross the Channel and reclaim his lost territories in Normandy from King Philip of France.

Less than a third of his barons had answered his call to arms, and to repay them for the insult, he had sent them home in disgrace and hired mercenaries in their stead at a great cost to England's treasury. Defeated by indifference before he began, he had suffered an abysmal loss in Flanders, at the Battle of Bouvines, and had once again been sent scurrying back to England, his tail firmly tucked between his legs.

His rage was then focused on his barons, namely those who had refused to join the ill-fated venture. He was the king! All of his subjects—nobles, clergy, knights, and peasants alike—were at his mercy, and he was determined to prove it, even if it meant fining every noble, burning every castle in England, and placing their inhabitants in prison!

To that end, he put vicious, brutal men in positions of power, giving them free rein to rape, steal, murder at whim.

Guy de Gisbourne was one such tyrant who laid no claim to the possession of either a conscience or a willingness to show mercy. One of his first tasks, upon taking command of Nottingham Castle, had been to fill the donjons with men and women who owed a tax or were suspected of hoarding profits. His was a garrison of misfits and brutes, his authority was fire and sword, and few who defied him by word or deed lived to see another dawn. Those meager few swelled the ranks of the outlaws who had begun to live in the surrounding forests. Gisbourne had put high prices on their heads, and when they were caught, he had their bodies drawn and quartered, their various parts hung in the village square until the flesh turned black and fell off the bones.