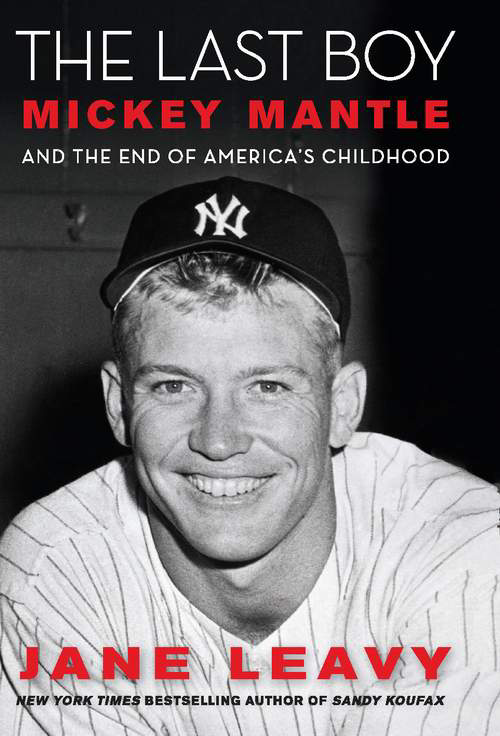 and the End of America’s Childhood

For Nick, with love and hope

In memory of my father, who taught me not to throw like a girl

Ya gotta be honest.

Preface: My Weekend with The Mick

Part Two A ROUND WITH THE MICH

Part Five RIDING WITH THE MICH

Preface: My Weekend with The Mick

M
ICKEY
M
ANTLE’S SWEATER HANGS
on the door to my office. I put it there the day I decided to write this book. It is the first thing I see when I sit down at my desk in the morning and the last thing I see when I shut down the computer at night. It has followed me from closet to closet and house to house since he gave it to me twenty-seven years ago. I packed it away in an old garment bag right after I said goodbye to him. I thought I was done with The Mick.

The sweater is as gray as the day we met—Yankee colors, road-trip gray and pinstripe blue. There is a baseball embroidered over the left breast with raised seams and the words
MICKEY MANTLE INVITATIONAL GOLF TOURNAMENT
stitched around the circumference. On the sweet spot it says,
THE CLARIDGE
, the hotel where Mantle had accepted a job as Director of Sports Promotions. I went there to interview him for
The Washington Post
in the spring of 1983.

Forty-eight absurdly tumultuous hours later I headed home flaunting his sweater. How many times have I told this story? How he saw me
shivering outside the clubhouse that raw day after nine holes of promotional golf and offered me his sweater. Everybody always said he’d give you the shirt off his back; I had the sweater to prove it. V-necked in the Fifties style that remains a fashion statement chiefly at exclusive American country clubs, Mickey’s sweater evokes a time when Mantle was at the top of his game and his game was the only one that mattered.

His gesture was warm, spontaneous, and authentic; the fabric felt like cashmere against my skin. But, like so many of the imperial vestments draped about the shoulders of heroes, this was the product of human engineering: 100
PERCENT VIRGIN ORLON ACRYLIC
.

Turned out I had never read the fine print on the manufacturer’s label. The warranty got me thinking: Which Mantle would I discover? An authentic human being or a synthetic construct of memory and imagination?

It took five years, far longer than I wished or imagined, to find an answer. Every time I heard a story of baseness and excess, I checked out the sweater in my office. Every time I heard an anecdote infused with kindness, humor, self-deprecation, or irony, I heard his laconic drawl: “Can’t we get this girl a
fuckin’
sweater? She’s gonna
fuckin’
freeze.”

Then, deep into my research, there came in the mail a videotape of Robert Lipsyte’s Media Day interview at the Claridge for
CBS Sunday Morning.
There’s Mick kicking at the damp sand, his ball buried in a trap and the wind playing havoc with his hair. He seizes his wedge, mutters imprecations at his ball and…he’s wearing
my
sweater! There I am in the background, hair freshly poodle-permed, all decked out in a brown suede suit, Loehmann’s circa 1983. I had gotten all dressed up for The Mick, the way I did when I wore Mary Janes on opening day of the baseball season.

I remembered being underdressed for the occasion. That’s why I needed his sweater. I remembered wearing cotton, not suede. Confronted with this disconcerting shard of videographic truth, the story I had told so often began to unravel like the yarn wound around the hard center of an official Major League baseball. I rushed to have another look at the sweater in my office. Somehow I had never noticed the “L” stitched into the collar. Shouldn’t Mickey’s sweater have been at least an XL or an XXL? If my memories didn’t match the evidence, what else might have
gotten blurred by the hero worship of childhood? Did he give me the shirt off his back? Or did I invent a kinder, warmer, bigger Mick, the Mick I wanted him to be?

I believe in memory, not memorabilia. Mickey’s sweater is the only artifact I kept from my tenure as a sportswriter. Memorabilia is a goal, a get, an end in itself leading nowhere except to the next acquisition. Memory is a process, albeit a faulty one. Mantle began burrowing into American memory the moment he stepped onto the public stage in 1951. Blond and blue-eyed, with a coast-to-coast smile, he was an unwitting antidote to the darkness and danger embodied by that other Fifties icon, Elvis Presley.

Mickey Charles Mantle was born on October 20, 1931. But like the sweater hanging in my office,
Mickey Mantle
is a blend of memory and distortion, fact and fiction, repetition and exaggeration. However far Mantle’s home runs traveled, his acolytes remembered them going farther; however great his pain, they remembered it as more disabling. In a life so publicly led, the accretion and reiteration of fable and detail are as thick as fifty years of paint jamming an old windowsill. My challenge was to strip away the layers and let in the air.

As much as anyone, the photographer Ozzie Sweet was responsible for how Mantle is remembered. Sweet first photographed him in the spring of 1952, when his boyish blemishes still required retouching. With his tripod and his old-fashioned view camera—the same equipment Mathew Brady used in the Civil War—Sweet produced portraits for 1,700 magazine covers but was known best for the confections he created for
SPORT
magazine. His specialty was what he called “simulated action,” set pieces choreographed to evoke heroes and hero worship. Every spring, he and Mantle would get together and decide how to expand the Sweet trove of Mantle iconography. “What do you think, Mick?” Sweet would ask. “Can we stage this and make it
look
real?”

He always shot from below, the angle of icons, rendering his subjects larger than life. Clouds and foliage were banished from the frame; nothing was allowed to clutter the image. His photos look as if they could have been taken anywhere, anytime. The context is timelessness.

In 1968, the last spring of his career, Mantle posed before a lavender sky with a Louisville Slugger resting lightly on his shoulder. Only the
“Slugger” in the redoubtable trademark is visible beneath his grip on the unsullied wood. Hand on hip in a posture of feigned informality, he gazes over his shoulder into a purple distance with just the barest hint of cumulous cloud on the horizon. Tufts of blond hair on his chiseled forearms shimmer in the glow from an unseen source of light. Beneath the smudged bill of his cap Mantle’s brow is puckered with age. The grain of his black leather belt is worn and punctured with asymmetrical holes added to accommodate the passage of time. Sweet says it was one of Mantle’s favorite pictures. It was also a template for a “no-dirt-under-the-fingernails” hero whose image would continue to be airbrushed long after his death.

The Mantle postage stamp issued by the U. S. Postal Service in July 2007 was an idealized collage, the head cloned from one photograph and the body from another. Phil Jordan, the art director, rejected the initial design because it didn’t look enough like “the image people had of him.” He wanted “the soft, baby-faced character, the blondness of him.”

He sent the artist back to the drawing board. Lonnie Busch, who outgrew his boyhood fondness for baseball long before he took up his palette, screened Billy Crystal’s Mantlecentric HBO movie
’61
* for inspiration. He painted an effulgent young slugger who fills the batter’s box with promise. The sky is an odd orange hue, as if the day could go either way. The green copper frieze of the House that Ruth Built rests squarely on his shoulders. His arms extend beyond the frame, too big to be contained in a miniaturist’s portrait. A better rendering of a person who felt bigger and smaller than life cannot be found. I asked Busch what he was trying to capture inside the sticky 1-by-1½-inch rectangle. “The light within the darkness,” he replied.

Who else—besides maybe Elvis—is lodged so firmly in pop iconography? They were two country boys fated for unimaginable fame and infamy. Look at their smiles: Elvis with a dark, brooding forelock dangling over his brow like an apostrophe and a curled upper lip. And Mick, with that slight overbite, those buckteeth (for which he had been sufficiently teased) pushing the corner of his mouth upward, into an irrepressible grin. “Mantle-esque,” the catcher-cum-broadcaster Tim McCarver called it. “Quite unlike any other that I remember. It was almost a measure of a man in his smile.”

Elvis served notice: the blatant sexual braggadocio was a come-on that came with a caution. Mantle’s darkness was concealed by a sunny, coltish smile and a euphonious name that makes product branders grin. Linguistically, “
Mickey Mantle
” is
mmm mmm good.

“He had a way of putting a smile on your face,” his compatriot, Duke Snider, said.

Even in Joe Torre’s Brooklyn neighborhood, where Snider ruled, you had to wear your hat like Mickey Mantle. A half century later, the Yankee manager demonstrated how the look was achieved: wetting the NY on his cap with spit, he wrapped the brim around a ball and stuck it in a coffee cup in the manager’s office just as he had as a boy in his mother’s kitchen. It was called the “Mantle Roll,” and it was as popular in the cornfields of Illinois as it was on the sidewalks of Bensonhurst. As Mantle’s teammate Jerry Coleman once said, “Everything he was is what everyone wanted to be and couldn’t.”

With his aura of limitless potential, Mantle was America incarnate. His raw talent, the unprecedented alloy of speed and power, spoke directly to our postwar optimism. His father mined Oklahoma’s depths for the lead and zinc that supported the country’s infrastructure and spurred its industrial growth. Mutt’s boy had honest muscles. His ham-hock forearms were wrought by actual work, not weight machines and steroid injections.

He was proof of America’s promise: anyone could grow up to be president or Mickey Mantle—
even
Mickey Mantle. And he recognized it. “I could have ended up buried in a hole in the ground, and I ended up being Mickey Mantle,” he mused. “There must be a god somewhere.” And, more succinctly, “I guess you could say I’m what this country is all about.”

He was numerologically charmed—lucky number 7,
The
Mick, synonymous with the number of planets, wonders, days, sins. “What does seven mean?” asked teammate Clete Boyer. “It means Mickey Mantle.”