Read The Law of Moses Online

The Law of Moses 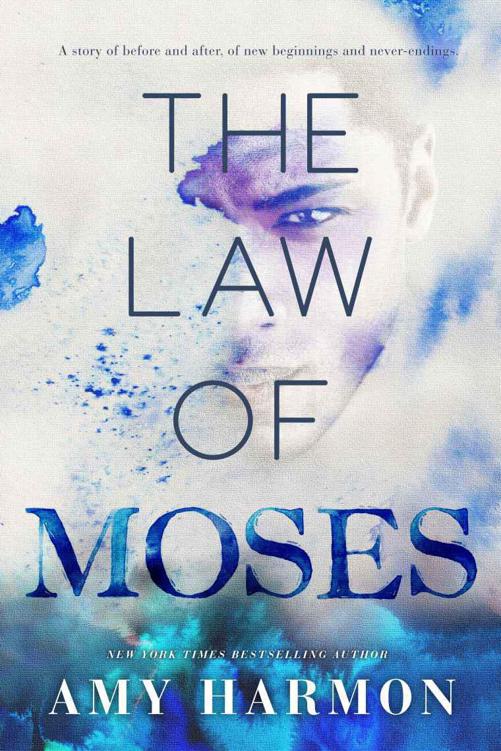 The Law of Moses

Without limiting the rights under copyright reserved above, no part of this publication may be reproduced, stored in or introduced into a retrieval system, or transmitted, in any form, or by any means (electronic, mechanical, photocopying, recording, or otherwise) without the prior written permission of both the copyright owner and the above publisher of this book.

This is a work of fiction. Names, characters, places, brands, media, and incidents are either the product of the author's imagination or are used fictitiously. The author acknowledges the trademarked status and trademark owners of various products, bands, and/or restaurants referenced in this work of fiction, which have been used without permission. The publication/use of these trademarks is not authorized, associated with, or sponsored by the trademark owners.

THE FIRST FEW WORDS of every story are always the hardest to write. It’s almost as if pulling them out, putting them on paper, commits you to seeing it all through. As if once you start, you are required to finish. And how do you finish when some things never end? This is the story of love with no end . . . though it took me a while to get there.

If I tell you right up front, right in the beginning that I lost him, it will be easier for you to bear. You will know it’s coming, and it will hurt. It will still make your chest ache and your stomach flip with dread. But you’ll know, and you’ll be able to prepare. And that’s my gift to you. I wasn’t given that same courtesy. I wasn’t prepared.

And after he was gone? It got worse, not better. The days grew harder, not easier. The regret was just as intense, the sorrow just as cutting, the endless stretch of days before me, days spent without him, just as hard. In truth—since I’ve decided that’s all I have—I would gladly submit myself to anything else. Anything but that. But that is what was given to me. And I wasn’t prepared.

I can’t tell you how it felt. How it still feels. I can’t. Words feel cheap and ring hollow and turn everything I say, everything I feel, into a tawdry romance novel full of flowery phrases designed to illicit sympathetic tears and an immediate response. A response that has nothing to do with reality and everything to do with easy emotion that you can set aside when you close the cover. Emotion that has you wiping your eyes and chirping a happy hiccup, appreciating the fact that it was all just a story. And best of all, not your story. But this isn’t like that.

Because it is my story. And I wasn’t prepared
.

THEY FOUND MOSES in a laundry basket at the Quick Wash, wrapped in a towel, a few hours old and close to death. A woman heard him cry and picked him up, putting him against her skin and wrapping them both in her coat until she could get help. She didn’t know who his mother was or if she was coming back, she only knew that he wasn’t wanted, that he was dying, and that if she didn’t get him to a hospital soon, it would be too late.

They called him a crack baby. My mom told me crack babies are what they call babies who are born addicted to cocaine because their mothers do drugs while they are pregnant. Crack babies are usually smaller than other babies because most of them are born too early to unhealthy moms. The cocaine alters their brain chemistry and they suffer from things like ADHD and impulse control. Sometimes they suffer from seizures and mental disorders. Sometimes they suffer from hallucinations and hyper sensitivity. It was believed that Moses would suffer from some of these things, maybe all of these things.

They shared his story on the ten o’clock news. It was a great story, a human interest piece—a little baby left in a basket at a dingy laundromat in a bad neighborhood in West Valley City. My mom says she remembers the story well, the pathetic shots of the baby in the hospital, hanging onto life, a feeding tube in his stomach and a little blue hat on his tiny head. They found the mother three days later, not that anyone wanted to hand the baby over. But they didn’t have to. She was dead. The woman who had abandoned her baby in a laundromat was pronounced dead on arrival from an apparent overdose at the very same hospital where her baby lay struggling for life, several floors above her. Somebody had found her too, though not in a laundromat.

The roommate, arrested that same evening for prostitution and possession, told the police what she knew about the woman and her abandoned baby in hopes of getting a little leniency. An autopsy of the woman’s body showed she had, indeed, given birth very recently. And later, DNA testing proved that the baby was hers. What a lucky little guy.

He was “the baby in the basket” in news reports, and the hospital staff dubbed him baby Moses. But baby Moses wasn’t found by the daughter of the Pharaoh like the biblical Moses. He wasn’t raised in a palace. He didn’t have a sister watching from the reeds, making sure his basket was pulled from the Nile. But he did have some family—Mom said the whole town was a buzz when it was discovered that baby Moses’s deceased mother was sort of a local girl, a girl named Jennifer Wright who had spent summers with her grandmother, who lived just down the street from our house. The grandmother was still in the area, Jennifer’s parents lived in a neighboring town, and a couple of her siblings, who had moved away, were still well-known by many as well. So little Moses had some family after all, not that any of them wanted a sick baby who was predicted to have all sorts of problems. Jennifer Wright had broken their hearts and left her family tired and shattered. Mom told me drugs do that. So the fact that she left them with a crack baby didn’t seem especially surprising. My mom said she’d just been a regular girl when she was younger. Pretty, nice, smart, even. But not smart enough to stay away from meth, cocaine, and whatever else she became a slave to. I imagined the crack baby, Moses, having a giant crack that ran down his body, like he’d been broken at birth. I knew that wasn’t what the term meant. But the image stuck in my mind. Maybe the fact that he was broken drew me to him from the start.

My mom said the whole town followed the story of baby Moses Wright when it happened, watching the reports, pretending like they had the inside scoop, and making up what they didn’t know, just to feel important. But I never knew baby Moses, because baby Moses grew up to be just plain Moses, juggled between Jennifer Wright’s family members, passed around when he became too much to take, transferred to another sibling or parent who then put up with him for a while before making someone else step in and take their turn. It all happened before I was born, and by the time I met him and my mom told me about him in an effort to help me “understand him and be kind,” the story was old news and nobody wanted anything to do with him. People love babies, even sick babies. Even crack babies. But babies grow up to be kids. Nobody really wants messed up kids.