Read The Leader And The Damned Online

The Leader And The Damned 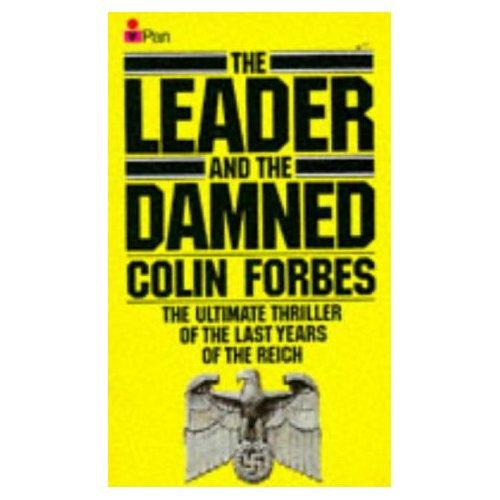 THE LEADER AND THE DAMNED

For Jane, for Marjory

who made it happen...

The Author and Publishers gratefully acknowledge permission to quote from the following:

The. Last Days of Hitler by Hugh Trevor-Roper: repro

The Craft Of Intelligence by Allen Dulles: reproduced by kind permission of George Weidenfeld & Nicolson Limited.

During the night (if we are to believe the report of Hanna Reitsch) Hitler called his court round him, and in this macabre conclave all rehearsed their plans for suicide...

That is all that is known about the disposal of the remnants of Hitler's and Eva Braun's bodies... 180 litres of petrol, burning slowly on a sandy bed, would char the flesh and dissipate the moisture of the bodies... but the bones would withstand the heat. Those bones have never been found...

...the fate of Martin Bormann remains a mystery.

Extracts from The Last Days of Hitler by H. R. Trevor-Roper (italics are author's).

In the last years of his life Hitler deliberately refused to exercise the extraordinary powers he had once displayed as a mass orator.

Extract from Hitler, A Study in Tyranny by Alan Bullock.

... the Soviets developed a fantastic source located in Switzerland, a certain Rudolf Roessler (code name 'Lucy'). By means which have not been ascertained to this day, Roessler in Switzerland was able to get intelligence from the German High Command...

Extract from The Craft Of Intelligence by Allen Dulles.

13 March 1943
. The time bomb which was to kill Adolf Hitler, Führer and Commander-in-Chief of the

German Armed Forces, was assembled at Smolensk with great care.

The terrible Russian winter was still persisting. Temperatures were far below zero as Hitler conferred with Field Marshal von Kluge on the next planned offensive against the Red Army. Wearing his military greatcoat and the peaked cap decorated with a gold eagle clutching the swastika in its claws, Hitler's mood was buoyant and aggressive.

'We shall smash the Russians by attacking earlier than they expect,' he told von Kluge and his staff officers. 'We shall annihilate them with one hammer-blow - because we shall outnumber them, out-tank them, out-gun them...'

'Mein Führer,' von Kluge intervened respectfully, 'I feel it my duty to point out that at the moment Stalin's troops outnumber ours.

Hitler paused, glanced round the half-ruined concrete building inside which the conference was being held, and stalked away to stare out through a broken window only half-protected by a canvas flap. The flap whipped in the wind which moaned in the brief silence. It was a typical dramatic gesture, the trick of a superb actor - to grip his audience in suspense before he made his sensational announcement.

Staring out of the window Hitler watched the endless line of Soviet prisoners trudging through the snow and guarded by Wehrmacht soldiers. The white hell of Russia faded into the distance, masked by falling snow. Beyond the line of prisoners stood another half-ruined building, its roof almost collapsed. Even Hitler's extraordinary intuition did not warn him of what was going on inside the relic.

He turned away, returned to the table and smashed his clenched fist on the map of the Eastern front spread over its surface. His voice rose to a manic shriek.

'At the moment,' he repeated. 'What you do not know, what I have come here to tell you is that soon you will have at your disposal another forty divisions - including ten Panzers! Now tell me that you cannot wipe the Red Army off the face of the earth within two months!'

Numbed with the cold despite the oil-heaters placed round the table - the building reeked with the stench of oil fumes - von Kluge, like every man on his staff, was astounded. The Field Marshal was the

first to recover his wits. Cautiously, he posed his question.

'
Mein Führer
, may I ask where these divisions, this truly massive reinforcement, is coming from?'

'From the West, of course!' Hitler shouted. 'The order will be given immediately I return to my headquarters. With these fresh troops and tanks you will be in Moscow by May! Once Moscow - the hub of the Soviet rail network - falls, Stalin is finished!'

'But the West will be left defenceless,' von Kluge persisted. 'It will be wide open to an Anglo-American landing..'

'Your memory is short, my dear von Kluge,' Hitler snapped, 'I conducted the same manoeuvre successfully when we overran Poland in 1939. The western frontiers of the Reich were defenceless then. At that time the British and French armies were on the Continent. Did they attack? No! All went as I predicted.'

'But when Churchill is informed of the withdrawal...'

Hitler was deliberately working himself up into a mood of contempt and rage.

'You think I have overlooked that? Dummy encampments and mock tank laagers are already prepared! When the enemy's reconnaissance planes photograph France and Belgium they will bring back evidence that the forty divisions are still there! It will be a military master-stroke! And once Moscow falls, it will take a mere handful of troops to wipe out the rabble remaining of Stalin's forces. You will have the whole summer to do that at your leisure. Then one hundred and twenty divisions will be transferred back to the West to face Mr Churchill and his American masters. I may put you in command, von Kluge,' he added casually.

Alone inside the other concrete building Hitler had gazed out at, General Henning von Tresckow, GSO1 of von Kluge's Army Group Centre had just completed the fabrication of the bomb and was fixing the timing device. At the doorway his accomplice, Lieutenant Schlabrendorff, stood anxiously on guard. Many years younger than the General, he was a bundle of nerves, half-frozen and his mind occupied with everything that could go wrong with the plot.

'How can we be sure when he will board the plane?' he asked. 'That affects your fixing of the clock. The bomb must explode while he is in mid-air - or we are finished...'

'Calm yourself,' von Tresckow reassured him without looking up from the device he was attending to. 'As soon as the conference is over the Führer is returning to the Wolf's Lair in East Prussia, a flight of eight hundred kilometres. That gives plenty of margin to time the detonation..

'Unless he decides to stay overnight.'

'That he will not do. He never likes to spend a moment longer than necessary from his power base. He trusts no one - he never has.'

And hence Hitler's unique capacity for self-preservation, von Tresckow was thinking. But this time he had slipped up; in Berlin certain generals were only waiting for news of the Führer's death to seize power. Satisfied that the time-bomb was ready, he took two bottles of brandy, placed them on a table, inserted the bomb inside an open package and shoved the bottles on top of it. Then, without hesitating, he walked out of the building followed by his aide and made for the airstrip where the Condor waiting to take Hitler back to Germany stood.

As he approached the machine Otto Reiter, an SS officer, stopped him and demanded to know what he was doing. General von Tresckow stood stiffly, his manner cold and overbearing as he stared back at the white-faced SS man with skeletal cheekbones. After a few seconds Reiter's eyes dropped from the chilly stare and looked at the package which the General shoved at him.

'A little present for a friend at the Wolf's Lair which I am about to place aboard the plane. Now, do I walk through you and over you or will you get out of the bloody way? Alternatively, I can ask the Führer himself - explaining that you have exceeded your rank and a spell at the front might teach you discipline.'

Reiter, his mind half-paralysed with the cold, shivered at the threat and stood aside. Climbing up inside the Condor, von Tresckow walked along between the special seats which had been fitted into the aircraft, peered through a frosted-up window to see the silhouettes of Reiter engaged in conversation with Schlabrendorff, and jammed the package under one of the.seats. Straightening his cap, he left the aircraft, sneezing violently as he passed Reiter, and returned to his quarters a short distance from the conference building.

The General would normally have attended the conference but at the last moment he had pleaded an attack of influenza to his chief, von Kluge, and now - away from his aide's presence - his outwardly calm demeanour changed. Sinking onto the mattress of his trestle bed he was wracked with anxiety. So many things could go wrong and his head was now well and truly on the block.

Would that swine of an SS officer, Reiter, decide to board the plane for a last-minute check? He
seemed
to have been satisfied with his glimpse of the two necks of the brandy bottles protruding from the package. Would the Führer - as he had so often in the past — change his schedule at the last moment? The man seemed to have an uncanny instinct for danger. He had so far survived six different attempts on his life. There was even a rumour von Tresckow had once heard that he had possessed a double - someone who could pass for Hitler himself in appearance. Was it indeed Adolf Hitler who at this moment was haranguing von Kluge's staff?

'Damnit, I used not to be so full of doubts,' he said to himself. It must be this accursed Russian cold which ate its way into the system and numbed all logical thought. He looked up, the door opened and Schlabrendorff appeared.

'He is just leaving! He is about to board the plane!' 'What did I tell you?'

The General stood up and pressed his palm against the ice-cold glass of the window. His own room was also filled with the stench of fumes from the oil-heater. He was not sure which he hated most: that ghastly stink which kept you alive or the dreaded cold which made it hard to think, an effort to move. Resolutely he held his hand against the numbing glass until they could just see through the outline of his palm-print the blurred figure of the Führer.