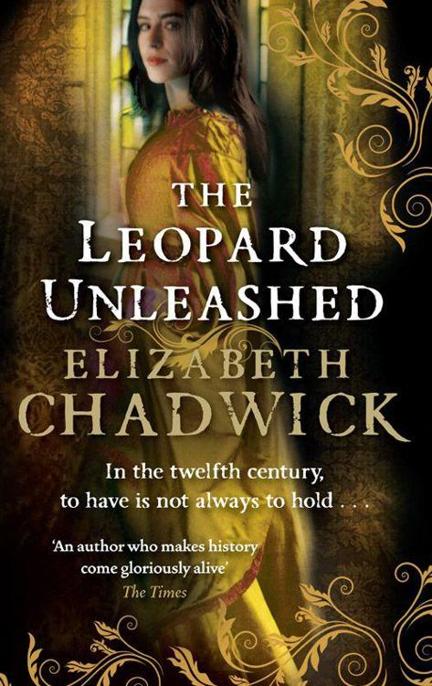 Elizabeth Chadwick
lives in Nottingham with her husband and two sons. Much of her research is carried out as a member of Regia Anglorum, an early medieval re-enactment society with the emphasis on accurately recreating the past. She also tutors in the skill of writing historical and romantic fiction. Her first novel,
The Wild Hunt
, won a Betty Trask Award. She was shortlisted for the Romantic Novelists’ Award in 1998 for
The Champion
, in 2001 for
Lords of the White Castle
, in 2002 for
The Winter Mantle
and in 2003 for
The Falcons of Montabard
. Her sixteenth novel,
The Scarlet Lion
, was nominated by Richard Lee, founder of the Historical Novel Society, as one of the top ten historical novels of the last decade.

For more details on Elizabeth Chadwick and her books, visit
www.elizabethchadwick.com

‘Wonderfully written, immensely moving and immaculately researched … An author who grows in stature with every book she writes’

‘Compelling historical fiction …by the best novelist in this genre’

‘One of Elizabeth Chadwick’s strengths is her stunning grasp of historical detail … her characters are beguiling, and the story intriguing and very enjoyable’

D
AUGHTERS OF THE
G
RAIL

Chapter 1: The Principality of Antioch, Spring 1139

Chapter 5: The Principality of Antioch

The Leopard Unleashed
was my third published novel and it continues the family story begun with
The Wild Hunt
and followed by
The Running Vixen
. The three books together have sometimes been called ‘The Ravenstow Trilogy’, but I’m not sure that it’s a correct umbrella. I never intended the books to be a trilogy. It was my intention to keep going with various family members for as long as the muse inspired. However, the vagaries of the publishing world and requirements of editors meant that
The Leopard Unleashed
became the final work in the series. Readers still ask me if I am going to continue the story, but I have to answer, not for the moment. However, it might be of interest to know that the early chapters of what I intended to be book four, were slightly modified and sneakily incorporated into the beginning of
The Love Knot
.

My novels have changed as my career has progressed. I began by writing historical adventure/romance stories with imaginary protagonists and have now moved on to bio graphical fiction with characters who actually lived.
The Leopard Unleashed
belongs to the adventure/romance
oeuvre
but I have striven to be as historically accurate as possible.

It has been an interesting journey revisiting
The Leopard Unleashed
to re-edit it in the light of increased historical knowledge and with more miles of writerly craft under my belt since first publication. Once a novel is published, I seldom revisit it because it has gone from private world to public sphere, warts and all. So I came to
Leopard
with almost fresh eyes. Many readers at that point knew more about the novel than I did! I would like to thank my editors at Sphere – Barbara Daniel, Joanne Dickinson and Rebecca Saunders – for allowing me the pleasure of a re-read and the opportunity to re-edit this book and make it available to readers once more.

The Principality of Antioch, Spring 1139

Antioch, the capital of Prince Raymond’s principality, was for Renard a rude and not altogether welcome awakening. It was easier to skirmish with Turks among the Nosairi foothills than it was to swelter along a crowded narrow street on a highly strung warhorse in the wake of a camel’s untrustworthy rear end. Renard hated camels – an aversion stemming from the occasion of his landing in St Simeon four years ago when one had spat an evil green broth all over his tunic and tried to squash him against a wall.

The beast, currently blocking his view, belched to an abrupt standstill. Renard’s stallion flattened his ears, and, skittered sideways to avoid a collision. The camel’s Bedouin rider cursed through his blackened teeth and swatted the animal with a leather goad. The camel defecated. Swearing, Renard reined back hard.

William de Lorys, a knight of his retinue, closed hard brown fingers over his saddle pommel and grinned. Ancelin, Renard’s English standard-bearer, chuckled into his fair
beard, dimples creasing his cheeks. Beyond them, among his soldiers, there were stifled guffaws. The glare Renard threw at the men only increased their amusement.

The camel lurched onwards, its huge flat feet moving with ungainly grace. Renard clicked his tongue to Gorvenal. The stallion pranced, unsettled by the camel and by the press of humanity as from all sides they were assailed by the hot, ripe city. A beggar thrust a sore-encrusted arm beneath Renard’s nose and pleaded for a coin. Another showed him blind eye sockets and a mutilated nose, but he had heard and seen it all before and was too impatient and saddle-weary to feel anything beyond irritation.

Four years in Outremer, he thought. Sometimes it seemed like forty. From the marcher hills of his birthplace to St Simeon in northern Syria, he had crossed not only oceans and mountain ranges, but the distance between childhood and maturity. He had been a restless young man of twenty-three at the court of his grandfather, King Henry, when he had met Raymond of Poitiers, recognised a kindred spirit, and when Raymond had left for Outremer to become Prince of Antioch, Renard had taken the Cross and accompanied him.

Renard’s mother and sister had wept, but his father, watching him with a shrewd gaze that missed nothing, said every man was entitled to sow wild oats providing he learned from their reaping. Renard supposed that somewhere along the way he must have learned. The restlessness still churned through him, but these days he was able to control the turbulence and apply it constructively.

The camel squeezed past two laden donkeys and down an impossibly narrow side street in the direction of the souk. Renard sighed with relief and, relaxing in the saddle,
started to view his surroundings in a slightly less jaundiced light.

His house in the city, sited conveniently close to the palace, was built of white, sun-flashed stone around a cool courtyard with fig trees and a fountain. It had once belonged to an emir. As Renard drew rein in front of the shaded stable area, grooms came running to take the horses, and Johad, his Turcopol steward appeared as if conjured from a djinn’s lamp. The man bowed deeply, flashed his master a gleaming smile, and presented him with a cup of freshly pressed fruit juice which Renard took and finished in several swift, parched gulps.

‘Johad, you’re a godsend!’ he said in Arabic as he removed the linen coif from his head. His hair clung to his scalp in black, saturated spikes and sweat trickled into the dark auburn grizzle of a three days’ beard. Returning the cup to his steward, he crossed the stableyard to the bathhouse. William de Lorys followed him. Ancelin, whose dislike of fruit juice was matched only by his dislike of taking baths, waved in disgust and perspired away in the direction of the kitchen to find some decent household wine.

‘Home,’ Renard said later as he sat cross-legged on the floor. Dressed in a cotton shirt and chausses and the flimsiest of silk tunics, he was eating a pilaff of saffron-coloured wild rice and spiced lamb. ‘If I were at home now, I’d be shivering in the thickest tunic I could find with my winter cloak on top of it, and dining on salt beef and gritty bread.’

‘Better than this muck!’ growled Ancelin, spitting a wad of gristle on to the bright rug. ‘Camel stew to eat, and camel’s piss to drink!’

Grinning, Renard reached, Arab-style, for the pilaff bowl.
‘When in Antioch …’ he said lightly; but although he had learned to enjoy the eastern way of life, he found that tonight the thought of salt beef was making his mouth water.