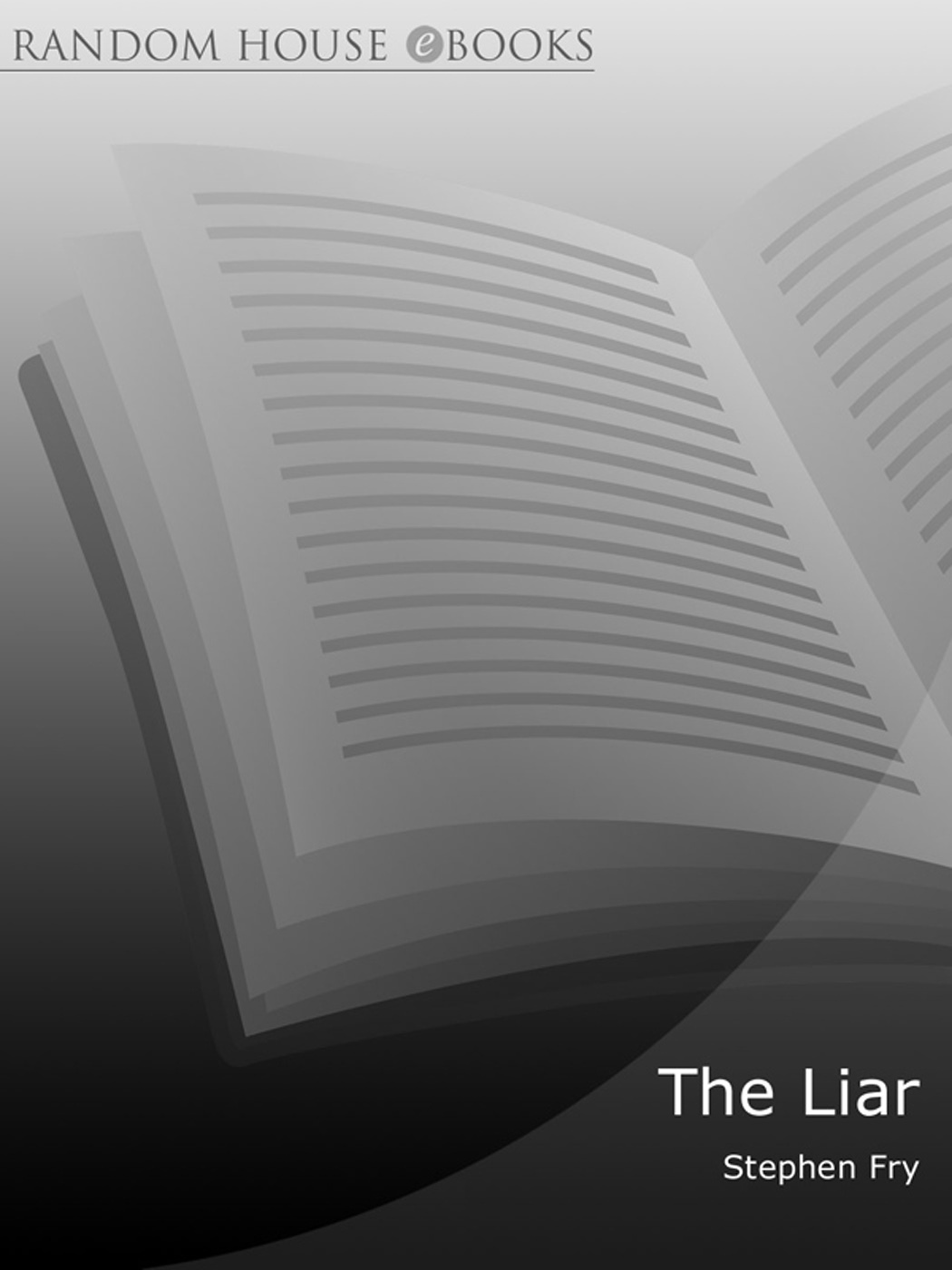 Stephen Fry was born in the twentieth century and will die in the twenty-first. In the course of writing seven books he has drunk four hundred and twelve thousand cups of coffee, smoked one and a half million cigarettes and worn out nineteen pairs of trousers. He has no birth sign.

Moab Is My Washpot

A Bit of Fry and Laurie

A Bit More Fry and Laurie

Three Bits of Fry and Laurie 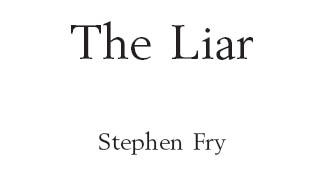 Not one word of the following is true

A
Fame
T-shirt stopped outside the house where Mozart was born. He looked up at the building and his eyes shone. He stood quite still, gazing upwards and glowing with adoration as a party of Bleached Denims and Fluorescent Bermuda Shorts pushed past him and went in. Then he shook his head, dug into his hip pocket and moved forwards. A thin high voice behind him caused him to stop mid-stride
.

‘
Have you ever contemplated, Adrian, the phenomenon of springs?
’

‘
Not coils, Adrian, no. Coils not. Think springs of water. Think wells and spas and sources. Well-springs in the widest and loveliest sense. Jerusalem, for instance, is a spring of religiosity. One small town in the desert, but the source of the world’s three most powerful faiths. It is the capital of Judaism, the scene of Christ’s crucifixion and the place from which Mohammed ascended into heaven. Religion seems to bubble from its sands
.’

The
Fame
T-shirt smiled to himself and walked into the building
.

A Tweed Jacket and a Blue Button-down Shirt of Oxford Cotton stopped in front of the steps. Now it was their turn to stare reverently upwards as the tide of human traffic streamed past them along the Getreidegasse
.

‘
Take Salzburg. By no means the chief city of Austria, but a Jerusalem to any music lover. Haydn, Schubert and … oh dear me yes, here we are … and Mozart
.’

‘
There’s a theory that special lines criss-cross the earth and that where they coincide strange things happen,’ said the Oxford Cotton Button-down Shirt. ‘Ley-lines, I think they call them
.’

‘
You’ll think I’m grinding my axe,’ said the Jacket, ‘but I should say that it is the German language that is responsible
.’

‘
By all means.’ The pair moved into the interior shadows of the house
.

‘
You see,’ continued the Tweed, ‘all the qualities of ironic abstraction that the language could not articulate found expression in their music
.’

‘
I had never thought of Haydn as ironic
.’

‘
It is of course quite possible that my theory is hopelessly wrong. Pay the nice Fräulein, Adrian
.’

In a second-storey chamber where little Wolfgang had romped, whose walls he had covered with precocious arithmetic and whose rafters he had made tremble with infant minuets, the
Fame
T-shirt examined the display cases
.

The ivory and tortoise-shell combs that once had smoothed the ruffled ringlets of the young genius appeared not to interest the T-shirt at all, nor the letters and laundry-lists, nor the child-size violins and violas. His attention was entirely taken up by the models of stage designs which were set into the wall in glass boxes all round the room
.

One box in particular seemed to fascinate him. He stared at it with intensity and suspicion as if half expecting the little papier mâchè figures inside to burst through the glass and punch him on the nose. He appeared to be oblivious of the group of Bleached Denims and Acid-coloured Shorts that pressed around him, laughing and joking in a language he didn’t understand
.

The model that so particularly engrossed him was of a banqueting hall in which stood a dining table heaped high with food. Two little men had been placed by the table, one crouched in terror, the other standing with hand on hip, in an attitude of cavalier contempt. Both figures looked upstage at the model of a white statue which pointed down at them with the accusing finger of an Italian traffic policeman or wartime recruiting poster
.

The Tweed Jacket and the Blue Button-down had just entered the room
.

‘
You start at that end, Adrian, and we’ll meet in the middle
.’

The Jacket watched the Oxford Cotton move to the other end of the room and then approached the cabinet, whose glass was still being misted by the intense scrutiny of the
Fame
T-shirt
.

‘Don Giovanni,’
said the Tweed coming up behind him
, ‘a cenar teco m’invitasti, e son venuto.
Don Giovanni, you invited me to dinner, and here I am
.’

‘
I believe you have something for me,’ said the Tweed
.

‘
Emburey? Middlesex and England? I had no idea you were interested in cricket
.’

‘
I get it out from a newspaper. It looked a very English name
.’

The Tweed moved on and joined the Blue Shirt, who had fallen into conversation with a Frenchwoman
.

‘
I was telling this lady,’ said the Shirt, ‘that I thought the design for
The Magic Flute
over there was by David Hockney
.’

‘
Certainly so,’ said the Tweed. ‘Hockney seems to me to paint in two styles. Wild and natural or cold and clinical. I seem to remember remarking that there are two kinds of Hockney. Field Hockney and Ice Hockney
.’

The Tweed was examining an exhibit
.

‘
This figure here must be the Queen of the Night, surely
.’

‘
She is a character altogether of the most extraordinary, I believe,’ said the Frenchwoman. ‘Her music – my God, how but that it is divine. I am myself singer and to play the Queen is the dearest dream of my bosom
.’

‘
It’s certainly one hell of a part
,’
said the Oxford Cotton. ‘Pretty difficult I’d have thought. What’s that incredibly high note she has to reach? It’s a top C, isn’t it?
’

The Frenchwoman’s answer to this question startled not just the Blue Button-down Shirt and his companion, but the whole room. For she stared at the Blue Shirt, her eyes round with fright, opened her mouth wide and let go a piercing soprano note of a purity and passion that she was never to repeat in the whole of her subsequent, and distinguished, operatic career
.

The Tweed Jacket turned and saw the cause of the scream and the cause of other, less technically proficient, screams that were starting up everywhere
.

In the middle of the room stood a man in a
Fame
T-shirt, twitching and leaping like a puppet
.

It was not the crudity of such a dance in such a place that had set everyone off, it was the sight and sound of the blood that creamed and frothed from his throat. The man seemed, as be hopped and stamped about, to be trying to stem the flow by squeezing at his neck with both bands, but the very pressure of the blood as it pumped outwards made such a task impossible
.

Time stands still at such moments
.

Those who retold the scene afterwards to friends, to psychiatrists, to priests, to the press, all spoke of the
noise.
To some it was a rattling gargle, to others a bubbling croak: the old man in the tweed jacket and his young companion agreed that they could never hear again the sound of a cappuccino machine without being forced to think of that awful death wheeze
.

All remembered the staggering quantity of the blood, the force of it pushing through the man’s fingers. All remembered the chorus of bass voices upraised in panic as helping hands braved the red shower and leapt forward to ease the jerking figure to the floor. All recalled how nothing could staunch the ferocious jetting of the fountain that gushed from the man’s neck and quenched the words ‘I’m Going to Live For Ever’ on his T-shirt with a dark stain. All remarked on how long it seemed to take him to die
.

But only one of them remembered seeing an enormously fat man with a small head and lank hair leave the room, letting a knife leap from his hand like a live fish as he went
.

Only one man saw that, and he kept it to himself. He grabbed his companion’s hand and led him from the room
.

‘
Come, Adrian. I think we should be otherwhere
.’

ADRIAN CHECKED THE
orchid at his buttonhole, inspected the spats at his feet, gave the lavender gloves a twitch, smoothed down his waistcoat, tucked the ebony Malaccacane under his arm, swallowed twice and pushed wide the changing-room door.

‘Well, what the fuck’s he wearing now?’ they snorted from the steamy end of the room.

The Truth of All Things by Kieran Shields
Where Love Takes You by Rosemary Smith
A world undone: the story of the Great War, 1914 to 1918 by G. J. Meyer
A Mating of Hawks by Jeanne Williams
Ruin (Dirty Secrets #3) by Mercy Amare
Inishbream by Theresa Kishkan
Galway Bay by Mary Pat Kelly
The Time Travelers' Handbook by Lottie Stride
The Trouble with Polly Brown by Tricia Bennett
First Surrender by Katie Reus