The Lincoln Lawyer: A Novel 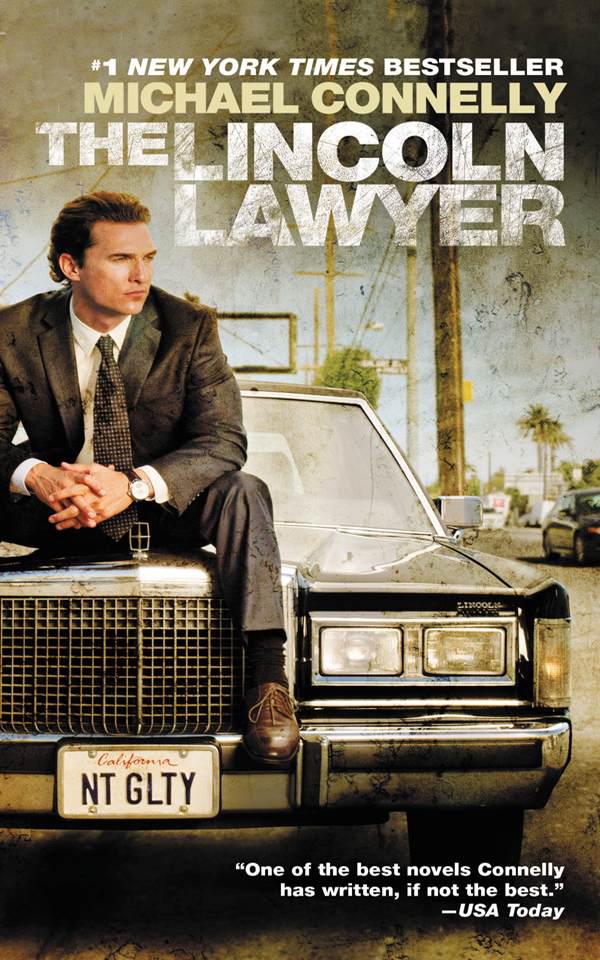 A Preview of
The Brass Verdict

A Preview of
The Gods of Guilt

THIS IS FOR DANIEL F. DALY
AND ROGER O. MILLS

There is no client as scary as an innocent man.

PART ONE
—Pretrial Intervention
One

T
he morning air off the Mojave in late winter is as clean and crisp as you’ll ever breathe in Los Angeles County. It carries
the taste of promise on it. When it starts blowing in like that I like to keep a window open in my office. There are a few
people who know this routine of mine, people like Fernando Valenzuela. The bondsman, not the baseball pitcher. He called me
as I was coming into Lancaster for a nine o’clock calendar call. He must have heard the wind whistling in my cell phone.

“At the moment,” I said as I put the window up to hear him better. “You got something?”

“Yeah, I got something. I think I got a franchise player here. But his first appearance is at eleven. Can you make it back
down in time?”

Valenzuela has a storefront office on Van Nuys Boulevard a block from the civic center, which includes two courthouses and
the Van Nuys jail. He calls his business Liberty Bail Bonds. His phone number, in red neon on the roof of his establishment,
can be seen from the high-power wing on the third floor of the jail. His number is scratched into the paint on the wall next
to every pay phone on every other ward in the jail.

You could say his name is also permanently scratched onto my
Christmas list. At the end of the year I give a can of salted nuts to everybody on it. Planters holiday mix. Each can has
a ribbon and bow on it. But no nuts inside. Just cash. I have a lot of bail bondsmen on my Christmas list. I eat holiday mix
out of Tupperware well into spring. Since my last divorce, it is sometimes all I get for dinner.

Before answering Valenzuela’s question I thought about the calendar call I was headed to. My client was named Harold Casey.
If the docket was handled alphabetically I could make an eleven o’clock hearing down in Van Nuys, no problem. But Judge Orton
Powell was in his last term on the bench. He was retiring. That meant he no longer faced reelection pressures, like those
from the private bar. To demonstrate his freedom—and possibly as a form of payback to those he had been politically beholden
to for twelve years—he liked to mix things up in his courtroom. Sometimes the calendar went alphabetical, sometimes reverse
alphabetical, sometimes by filing date. You never knew how the call would go until you got there. Often lawyers cooled their
heels for better than an hour in Powell’s courtroom. The judge liked that.

“I think I can make eleven,” I said, without knowing for sure. “What’s the case?”

“Guy’s gotta be big money. Beverly Hills address, family lawyer waltzing in here first thing. This is the real thing, Mick.
They booked him on a half mil and his mother’s lawyer came in here today ready to sign over property in Malibu to secure it.
Didn’t even ask about getting it lowered first. I guess they aren’t too worried about him running.”

“Booked for what?” I asked.

I kept my voice even. The scent of money in the water often leads to a feeding frenzy but I had taken care of Valenzuela on
enough Christmases to know I had him on the hook exclusively. I could play it cool.

“The cops booked him for ag-assault, GBI and attempted rape for starters,” the bondsman answered. “The DA hasn’t filed yet
as far as I know.”

The police usually overbooked the charges. What mattered was what the prosecutors finally filed and took to court. I always
say cases go in like a lion and come out like a lamb. A case going in as attempted rape and aggravated assault with great
bodily injury could easily come out as simple battery. It wouldn’t surprise me and it wouldn’t make for much of a franchise
case. Still, if I could get to the client and make a fee agreement based on the announced charges, I could look good when
the DA later knocked them down.

“You got any of the details?” I asked.

“He was booked last night. It sounds like a bar pickup gone bad. The family lawyer said the woman’s in it for the money. You
know, the civil suit to follow the criminal case. But I’m not so sure. She got beat up pretty good from what I heard.”

“Hold on a sec. I’ve got his card here somewhere.”

I looked out the window while waiting for Valenzuela to find the business card. I was two minutes from the Lancaster courthouse
and twelve minutes from calendar call. I needed at least three of those minutes in between to confer with my client and give
him the bad news.

“Okay, here it is,” Valenzuela said. “Guy’s name is Cecil C. Dobbs, Esquire. Out of Century City. See, I told you. Money.”

Valenzuela was right. But it wasn’t the lawyer’s Century City address that said money. It was the name. I knew of C. C. Dobbs
by reputation and guessed that there wouldn’t be more than one or two names on his entire client list that didn’t have a Bel-Air
or Holmby Hills address. His kind of client went home to the places where the stars seemed to reach down at night to touch
the anointed.

“That would be Louis Ross Roulet.”

He spelled it and I wrote it down on a legal pad.

“Almost like the spinning wheel but you pronounce it Roo-
lay,
” he said. “You going to be here, Mick?”

Before responding I wrote the name C. C. Dobbs on the pad. I then answered Valenzuela with a question.

I had to be careful with this. I had to assume Dobbs was the kind of lawyer who would go to the California bar in a heartbeat
if he came across a criminal defense attorney paying off bondsmen for client referrals. In fact, I started wondering if the
whole thing might be a bar sting operation that Valenzuela hadn’t picked up on. I wasn’t one of the bar’s favorite sons. They
had come at me before. More than once.

“I asked Roulet if he had a lawyer, you know? A criminal defense lawyer, and he said no. I told him about you. I didn’t push
it. I just said you were good. Soft sell, you know?”

“Was this before or after Dobbs came into it?”

“No, before. Roulet called me this morning from the jail. They got him up on high power and he saw the sign, I guess. Dobbs
showed up after that. I told him you were in, gave him your pedigree, and he was cool with it. He’ll be there at eleven. You’ll
see how he is.”

I didn’t speak for a long moment. I wondered how truthful Valenzuela was being with me. A guy like Dobbs would have had his
own man. If it wasn’t his own forte, then he’d have had a criminal specialist in the firm or, at least, on standby. But Valenzuela’s
story seemed to contradict this. Roulet came to him empty-handed. It told me that there was more to this case I didn’t know
than what I did.

“Hey, Mick, you there?” Valenzuela prompted.

I made a decision. It was a decision that would eventually lead me back to Jesus Menendez and that I would in many ways come
to regret. But at the moment it was made, it was just another choice made of necessity and routine.

I was about to close the phone when I heard Valenzuela’s voice come back at me.

“And you’ll take care of me for this, right, Mick? I mean, you know, if this is the franchise.”

It was the first time Valenzuela had ever sought assurance of
a payback from me. It played further into my paranoia and I carefully constructed an answer that would satisfy him and the
bar—if it was listening.

I closed the phone before he could say anything else and told my driver to drop me off at the employee entrance to the courthouse.
The line at the metal detector would be shorter and quicker there and the security men usually didn’t mind the lawyers—the
regulars—sneaking through so they could make court on time.

As I thought about Louis Ross Roulet and the case and the possible riches and dangers that waited for me, I put the window
back down so I could enjoy the morning’s last minute of clean, fresh air. It still carried the taste of promise.

T
he courtroom in Department 2A was crowded with lawyers negotiating and socializing on both sides of the bar when I got there.
I could tell the session was going to start on time because I saw the bailiff seated at his desk. This meant the judge was
close to taking the bench.

In Los Angeles County the bailiffs are actually sworn deputy sheriffs who are assigned to the jail division. I approached
the bailiff, whose desk was right next to the bar railing so citizens could come up to ask questions without having to violate
the space assigned to the lawyers, defendants and courtroom personnel. I saw the calendar on the clipboard in front of him.
I checked the nameplate on his uniform—R. Rodriguez—before speaking.

“Roberto, you got my guy on there? Harold Casey?”

The bailiff used his finger to start down the list on the call sheet but stopped quickly. This meant I was in luck.

“Alphabetical today, good. Do I have time to go back and see him?”

“No, they’re bringing the first group in now. I just called. The judge is coming out. You’ll probably have a couple minutes
to see your guy in the pen.”

I started to walk toward the gate when he called after me.

“And it’s Reynaldo, not Roberto.”

“Us bailiffs, we all look alike, right?”

I didn’t know if that was an attempt at humor or just a dig at me. I didn’t answer. I just smiled and went through the gate.
I nodded at a couple lawyers I didn’t know and a couple that I did. One stopped me to ask how long I was going to be up in
front of the judge because he wanted to gauge when to come back for his own client’s appearance. I told him I was going to
be quick.

During a calendar call incarcerated defendants are brought to the courtroom in groups of four and held in a wood-and-glass
enclosure known as the pen. This allows the defendants to confer with their attorneys in the moments before their case is
called for whatever matter is before the court.