Read The Lion and the Lark Online

The Lion and the Lark 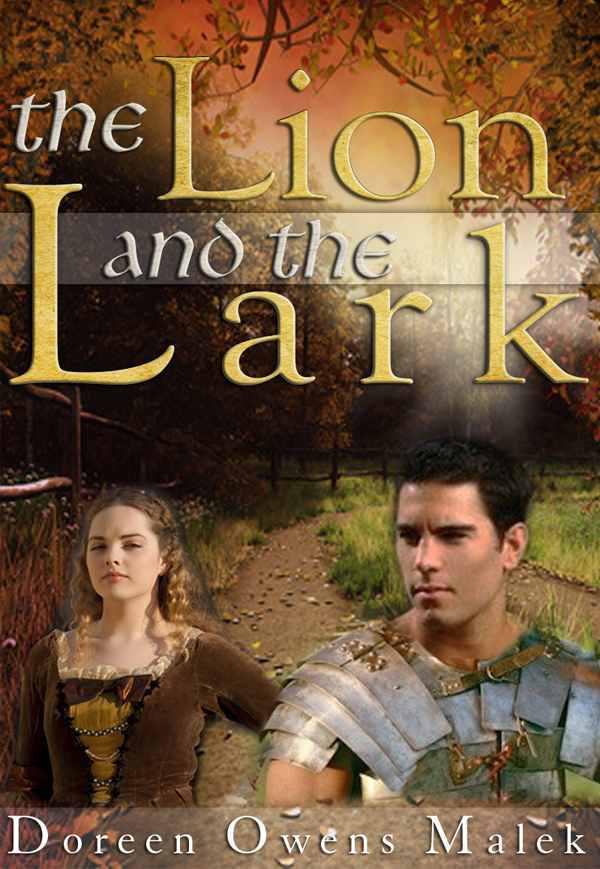 The Author asserts the moral right to be

identified as author of this work.

All rights reserved. No part of this book may be

reproducedor transmitted in any form or by an

photodopy, recoding, scanning or any information

in writing from the author or Publisher.

The hot Roman sun bathed the forum in yellow light as Claudius strode past the Temple of Vesta and toward the Senate building.  His blood red cloak hung as heavily on his shoulders as a slaughtered deer, but he didn’t want to take it off and be out of uniform for his meeting with Ammianus Scipio, the colonial governor of Britain.

He threaded his way through the crowd, dodging the litters of the nobility  carried by liveried servants, ignoring the cries of the vendors hawking wares from stalls and the speeches of the politicians delivered to the small crowds gathered in front of
rostra
, or speaker’s platforms.  Slaves of all colors from all parts of the world trudged past him carrying burdens, and
pi
dogs as well as ragged children from the
insulae
, or low rent apartment houses, darted across his path.  He nodded at several uniformed soldiers, dressed in vivid garnet like himself, and walked around the table of a Greek scribe who had set up shop to write letters for the largely illiterate population.  A poet recited his latest creation outside a tent where skins were tanned and cured for sale, and Claudius shrugged off the touch of a Persian rug dealer who assumed an officer would have the money to spend on a heavily worked tapestry from Bithynia.

Claudius stopped and purchased a soft drink, made from grape must and sugared water and presented to him in a wooden cup.  He swallowed the liquid in one gulp and returned the vessel to the vendor, handing him a
denarius
in payment.  Claudius looked at the bustle surrounding him but did not see it, his mind far away.

He had an idea why he had been summoned to this conference; he had just returned from an imperial base in Spain, from which he had put down rebellions in Iberia and North Africa, and he suspected that he would be sent off to quell another one.  Since the death of Julius Caesar in March, all the disaffected colonies had seen an opportunity to escape Roman bondage while the central government was in disarray, and Claudius had traveled around the world for the last six months, putting out fires.  But now that Mark Antony and Caesar’s nephew Octavian had stabilized the power source in Italy, many of the outlying districts had also settled down.  The notable exception was Britain, whose Celtic tribes were always the most restive elements in the far flung Roman Empire.

Claudius walked on, bypassing a fishmonger describing his produce as “fresh today from Herculaneum,” and a wool merchant holding up a cloak dyed Tyrian purple.  He left the forum behind and headed for the
porta publica ,
or public gate, of the Senate.  He ran up the broad rounded steps of the columned building, nodding at the Praetorian guards flanking the entrance, who saluted him smartly.  As he strode inside, his hobnailed sandals ringing on the marble floor, he bowed his head before the huge statue of Capitoline Zeus which dominated the circular entrance hall.  Then he turned left down a wide corridor, dark and torchlit even though it was bright day outside, since the wall facing the street was windowless.  He passed niches containing images of various gods, their carved feet graced by garlands from hopeful petitioners, and stopped before a heavily crenellated doorway, above which the letters SPQR,
Senatus Populusque Romanus
, were carved into the stone wall.

The four guards standing outside the room presented arms when they saw him, then rested again.  The guard closest to the oak paneled door opened it and announced him.

Scipio looked up from the scroll he was reading and gestured for Claudius to sit.  Also in the room were Octavian, the son of the late dictator’s sister, and Mark Antony, looking older and more world weary than when Claudius had last seen him.

“
Ave, Imperator
, ” Claudius said to Octavian, who waved his hand dismissively, indicating that they would dispense with formalities and get right down to business.

Claudius took his place in the empty chair and waited.  He had been a soldier since boyhood and was accustomed to keeping his own counsel until he received his orders.

“The Celts are at it again,” Mark Antony said tiredly, leaning against the far wall and folding his arms.  The scrolls in the cubbyholes behind him framed his curly dark head as his expression spoke of his disgust with the recalcitrant natives of Britain.

“The worst trouble is here,” Scipio said, rising and pointing to a spot on a map pinned to the wall. “Camulodunum.”

Claudius looked in the direction of Scipio’s finger and saw him touch the southeastern corner of the island marked
Brittania.

“They have been in rebellion on and off after my uncle invaded and conquered them ten years ago, but since his death the outbreaks have been constant,” Octavian said, his sharp nose wrinking with distaste.  “The main troublemakers are the Iceni and the Trinovantes, with the Iceni king, Borrus, leading the way.  We’ve lost too many men and too much time already, we want to end the infighting before winter comes and they have the advantage over us.”

“The ability to endure the British winter,” Scipio said dryly.  “Especially in the area north of Londinium, the cold can be fierce.  They’re used to it, and we’re not. Add to that their familiarity with the terrain and their facility for surprise attacks...” he spread his hands.

“Tribune, we want you to take a troop of reinforcements to Britain and help stamp out this rebellion, or at least come to terms on a treaty,” Octavian said.  “We want the fighting to stop, it’s costing us too much.  You’ll sail from Ostia within the week.”

“How many men?” Claudius asked calmly, thinking ahead.  The order was not a surprise.

“Two thousand in ten ships, for a start.  We’ll send more if the general’s communiques indicate that they are necessary.”

“How much time will I have?”

“As much as you need, but the snow starts falling there in the tenth month,” Scipio said warningly.

“When will you be joining me?” Claudius asked, looking inquiringly at the general.

“In a month or so, after my business here is concluded.  But be warned, lion cub, you will not be dealing with eighth generation Carthaginians in Britain.  The men there are the fiercest warriors I have ever encountered,   and the women...” He smiled.  “They are not Roman matrons, I can assure you.  They’ll take a cudgel to you as quickly as any of their men will.  Can you deal with people who paint their faces blue and sacrifice to trees and in summer go naked into battle?”

“If it is my duty, I must,” Claudius said simply.

Scipio nodded.  It was the correct answer.

“Very well,” the general said.  “I will send your orders to your house within the next few days.  Be prepared for a stay there of at least ten months.”

Claudius rose to go.  As the door closed behind him Mark Antony said to Octavian, “Are you sure he is the man for this job?  He just got back from Spain.”

“He has the most experience dealing with colonial uprisings,” Octavian replied.

“He has no experience dealing with the Celts.  The general here seems to feel that they are a special case.”

Scipio sighed heavily and began to rewind the scroll he had been reading.  “Leonatus is as well suited as anyone to handle this mission.  There is no way to prepare any man in advance for Britain, and he is intelligent and adaptable.  In any case, there IS no one else.  Marcellinus is still in North Africa and Lucullus will be in Macedonia until the Ides of March.  I need someone right now, someone I know I can work with, and Claudius Leonatus is the logical choice.  His stewards will have to look after his estate farms and his vineyards in the north of Italy, I have more important things for him to do.”

Antony glanced at Octavian, then fell silent.  On the subject of Britain, Scipio was the last word, and even the great Caesar’s lieutenant did not feel qualified to dispute him.

“Where is the roster of the tenth legion?” Scipio asked impatiently.  “With your permission, I’ll decimate it and the eleventh for the new British task force.”

Mark Antony nodded and handed him the scroll, while Octavian looked on, his expression thoughtful.

Bronwen, princess of the Iceni, lifted the kettle from its hook above the fire and poured rabbit stew into a wooden bowl.  The skins of the
coinins
which had gone into the mixture were nailed to the wooden crosspiece above the clay hearth, drying in the smoke which escaped through a circular opening in the thatched roof.

She went to the door of the stone and timber roundhouse and looked across the clearing for her father, but she didn’t see him.  She left the stew to cool and went outside, slinging the pole with her water jugs across her shoulders and enjoying the late summer sunshine.

The dwelling she had just left was by far the most elaborate in the tribal village, what Caesar in his
Commentaries
had called an
oppidum
, or little town.  Bronwen was the king’s daughter, and so shared his special residence, with its double thatched roof, handcrafted furniture and second floor sleeping rooms reached by a ladder.  The large open space just under the roof was used to store preserved and dried food, and wattle secured with mud daub formed the floor of the upper level as well as the surprisingly secure outer walls.  In back of the house a storage pit boasted a larder of wheat, beans, nuts and fruit which bespoke the family’s special status.  Bronwen’s father also had the largest garden patch and a stable, where she and the men kept their horses, as well as his own herd of cattle.  She had always enjoyed these special privileges, and viewed them as a mere recompense for the many responsibilities her father bore as the leader of his people.

Bronwen strode through the settlement to the spring which flowed through the sacred grove of trees, her red gold hair in a long braid down her back, her blue-green eyes alert to everything around her.  When she lowered the pole to fill the two buckets suspended from it by ropes, her reflection in the clear pool revealed a pretty young woman whose high cheekbones and ivory skin bespoke her heritage.

Bronwen set the pails on the grassy bank and lay back against the trunk of a tree, gazing up through the leaves at the cloudless blue sky.  She knew that the halcyon weather was deceptive; it wouldn’t be long before chill winds blew the leaves from the trees and the Iceni would be forced to retreat into their huts, huddling before their fires, wrapped in their striped woolen cloaks.  Her gaze shifted toward the eastern hills, where she could just glimpse the outline of the large Roman fortress which dominated the coastline.