Read The Lord of Near and Nigh: Shifter MC Novel (Pureblood Predator MC Book 2) Online

The Lord of Near and Nigh: Shifter MC Novel (Pureblood Predator MC Book 2) 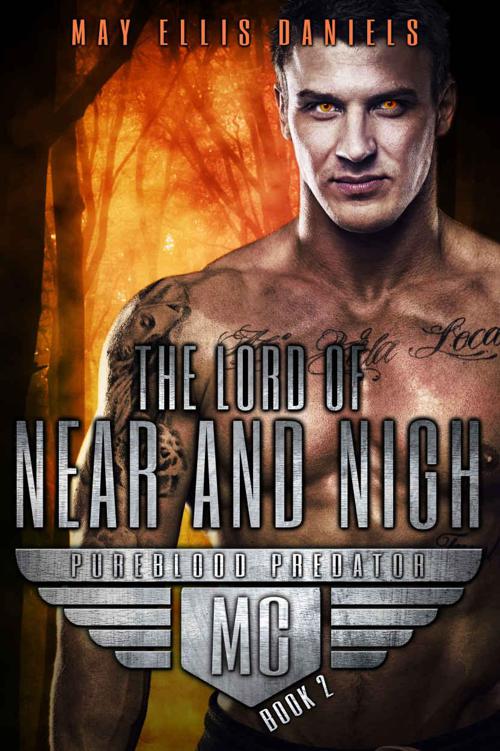 About Author May Ellis Daniels

The Lord of Near and Nigh

The Lord of Near and Nigh
is a work of fiction. Names, characters, places and events portrayed in this story are products of the author’s imagination or are used fictitiously.

No part of this text may be reproduced, transmitted, shared, down-loaded, compiled, stored, or introduced into any information storage and retrieval system, in any form or by any means, whether electronic or mechanical, now known or hereinafter invented, without the express written permission of the author.

L
IFE
SWEEPS
YOU
up in its day-to-day bullshit and you lose sight of the big picture.

Forget who you are. What’s important.

Soren comes in quick and low, like the sneaky pussycat motherfucker he is. The grass beneath my feet is moist with dew. Slippery. I dig my claws into the dirt and pivot left, smashing my fist down, hoping to catch Soren on the back of the head as he whips past. Pain stabs in my left calf as Soren’s teeth tear into my flesh.

Bastard’s trying to hamstring me. And I tell you what: an inch lower and he would’ve, and I’d be on the ground right now, deciding whether to scream yield or let this pretentious Euro-dick rip my throat out.

No way I’m yielding. Not to this LA asshole. Not to no one.

Either way, whether I yield or die, Soren the pussycat becomes alpha of my pack.

And that’s not happening.

Not that my pack is mad impressive these days. Mia’s living in a constant cloud of bitch. Nash is so ramped up on blow he could boost a dead battery. And Sorry? Sorry’s my kid brother, but damned if it doesn’t feel like something dark’s needling at him.

A few screams and boos and cheers as the crowd sees Soren take a bite of me. They sound distant, their faces an unfocused blur as Soren and me circle one another, eyeing for an advantage.

There’s nine Purebloods surrounding us. Nine tough-as-hell apex predator motherfuckers. That’s nearly the entire West Coast contingent of the Pureblood Predators MC. Waiting to see who survives this death-match to learn who their new alpha is.

“You’ve gotten slow and stupid and fat,” Soren sneers, his cat fangs shining in the moonlight. He makes a run at me, then spins to the side at the last minute. “Like an American.”

It’s bullshit and he knows it. He’s trying to get under my skin. But in the back of my mind I think:
I’m tired. I’m so fucking tired.
And that thought might be deadly. Might mean the end of me.

Because that’s doubt, and doubt will kill you quicker than anything.

Soren smiles. He senses it.

“Slow and fat and soft,” he continues. “I’ve fucked Skin bitches with more fight than you.”

My wolf rears up, smashing against his cage, and without even thinking I bare my teeth and growl.

“That your little doggy, Aaron? Little doggy come out to play fetch?”

I lunge at him. It’s a wild move. Soren pivots, easily avoids my claws and says, “Heard about your Skin bitch. You settling down? Trading your bike for a mini-van? Your MC cut for a fucking change table?”

Soren’s a stocky but smallish guy with watery yellow eyes and pale skin and even paler close-cropped blonde hair. Spends a lot of time flying high on chemical cocktails, hunting teenyboppers through the EDM raves in LA’s shithole warehouses. With his animal straining against his collar his face is covered in a fine mat of spotted fur and his mouth is lined in jagged, razor-sharp teeth.

Wonder what the Skin teenybopper bitches would think of that.

Soren lifts his head and screeches. It’s an awful, ear-splitting sound that makes me wince and nearly cover my ears. Sounds like something caught in a leg trap. Fucking lynx. Always screeching when they smell a kill. Haven’t learned the value of silence.

I stagger back, exaggerating how much Soren’s screech has thrown me off, and also exaggerating the limp in my left leg.

It’s rather impressive, I admit.

At the last second I step nimbly right. Soren’s eyes widen when he realizes he misjudged the seriousness of my wound, but it’s too late: he’s already airborne, hurtling toward me. I unleash as much of the wolf as I can without the collar strangling me, drop my claws as long as I dare and swipe up at him. Soren tries to spin in midair, manages to dodge what should be a killing blow.

My claws rake into him, good and deep, opening the Euro-twat from his ribcage to his hip. He screeches again, this time in pain and fear. The sound sends a shudder of animal bloodlust through me. Soren lands in a heap, his red blood shining black in the moonlight, then rolls a few yards away and stands.

“Nearly fucking balled me,” he says with awe in his voice while he touches the four gaping claw marks on his torso.

I don’t say a word, just lower to all fours and begin circling my prey in a fast, wide arc. Soren spins in a circle, looking like a real fucking idiot, and that’s a good sign, it means he’s confused, his battle mind thrown off by the pain and the sight of his own blood.

Always knew Soren was a bitch who couldn’t stand the sight of his own blood.

I rush at him, feint right and sprint past. He spins, tries to pounce on my back, misses.

Soren gets to his feet, screaming obscenities in Swede of Dutch or whatever Euro-dump he came from.

At my next charge Soren thinks he’s on to me and he stands his ground, determined not to be thrown off guard by another feint. But this time I’m not feinting. A low, throaty snarl escapes my lips and then I’m on him, slashing my claws into his belly, tearing him open. I feel him get a good slice into my back, but the pain only makes me insane with rage. There’s nothing in the world but this moment of murder and blood and pain where my life and my enemy’s life dances along a razor’s edge.

Moments like these are rare gifts. Almost worth living for.

I snap my jaws down, narrowly missing Soren’s pasty throat and a bullseye killing blow. Damn. But I do clamp on his shoulder, close to his neck, and now our faces are pressed so close together I can smell the Eurotrash’s fruity breath. He’s slashing at my back and wailing, because there’s a horrible tearing sound as I whip my heavily muscled neck from side to side, lifting the little cat bastard off his feet. My claws slide up into him, slashing and digging as I toss him from side to side, and then another hideous rip and Soren’s belly opens and the stench of his foul insides fill my nose.

You want to know what we are? Deep down?

Want to know the Big Secret of Life?

Wait a second. Here it is.

Bones and blood and soft bits that stink when you shred them.

Soren’s collarbone crunches under my jaws and I bury my claws in his guts and lift him up, biting down again, nearly on his neck now and the poor putty-cat’s not wailing anymore, all he can do is make this wheezy gurgling because my incisor’s have punctured clean through his windpipe.

No one’s cheering or jeering now.

Soren’s arms hang limp at his sides. He’s a rag-doll in my teeth. He stares up at me, his ugly yellow eyes only inches from mine, his blood pulsing from his throat and now’s the time I should release him, give him the opportunity to yield. But the wolf in me is mad with blood and my vision’s a blurry red haze and so I keep whipping him back and forth, listening to the muscle and sinew in his neck stretch and tear, sucking back his pumping red blood. The blood of a fellow Pureblood won’t nourish me, but that doesn’t mean I don’t enjoy it. I haven’t severed Soren’s jugular yet, but I’m still crunching down, aiming to.

Let there be no mistake about who leads this united pack.

Let every single one of them understand what I’m capable of.

That I’d sooner kill them than look at them.

A strong, restraining hand grips my shoulder. My brother’s hand. Sorry. Ever the peacekeeper. The little bitch. Trouble is, Sorry’s
not
little. He’s a lot bigger than me, and buried way in the back of my mind I wonder—

Fuck it. I sink my teeth deeper into Soren’s blood-soaked neck. Stay focused on this kill. That thought about my bro isn’t worth shit.

Sorry continues talking low and calm in my ear, calling me back from the animal madness. Fuck you, I want to scream, because the shit’s sticking his nose where it doesn’t belong.

“Let him yield, Aaron,” Sorry whispers. “They’ll respect you more. Show them you have control.”

Control
. The word sends a fresh wave of anger smashing through me. Controlling my pack is easy compared to controlling the wild animal inside. A pack member can be beaten and bitten into submission. But my wolf? I can’t touch him. No. And the truth of who’s really running the show makes me open my jaws, drop Soren to the ground and swat Sorry’s hand off my shoulder.

I turn to face my brother. I know I’m a hideous sight: face covered in silver-black fur matted in blood, blue eyes glowing like the morning sun on arctic ice, my fangs gleaming. Sorry’s eyes widen, but only for a moment, and a part of me thinks he should be more frightened.

One day it might be him lying in a broken and bloody heap at my feet.

Sorry raises his hands, takes a few steps back, gives me space.

Good. Fall in behind me, brother, and do it now.

This wolf’s wild with bloodscent.

Soren’s squirming in the flattened grass, pressing both hands to the gaping wound on his neck. Fucker might die even though I showed mercy.

Won’t keep me awake if he does.

I’ve lost some damned good Purebloods to this bastard’s upstart SoCal MC. And if my crew’s been defecting more and more in the past few years…well, fuck ‘em if they can’t take a joke. Pussies. I’m not gunna sit around, fretting over why so many have left me. I’m not gunna—what do the Skin’s say?—have a fucking crisis of conscience.

I got no conscience. No remorse.

And no regrets, either.

That’s the joy of living so close to my animal. Bitches like Soren, they live so far from their animal they almost forget it’s there. Like wannabe Skins or something. Fucking traitors to who and what we are. But I tell you this: right now Soren’s wishing he’d spent more time hunting Stricken and murdering Skins and stalking through the woods at night, hot on the scent of frightened prey, than with his face buried in slick Skin gash.

That’s the irony of this life. The Skin world sucks you in if you let it. Pretty soon you’re thinking you’re a big-shot. You got bitches lined up from LA to New York. Enough blow to fund a third world dictatorship. More money than the Department of Defense. Friends in high places that lie and say you’re important. The Skins are weak, but greed and vanity and pride aren’t.