Read The Lucky One Online 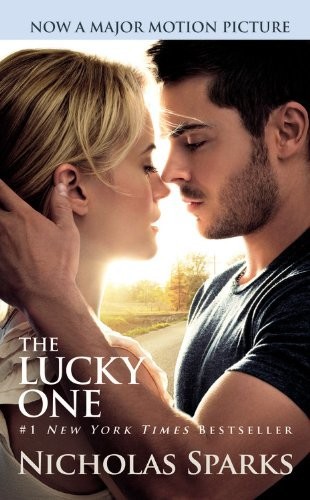 Message in a Bottle

A Walk to Remember

A Bend in the Road

Three Weeks with My Brother
(with Micah Sparks)

For Jamie Raab and Dennis Dalrymple

and a year to forget.

I’m with you in spirit.

W
riting is never a solitary effort, and as always, there are many people I have to thank for having the energy and ability to complete this novel. There are many ways to honor these people for their efforts, of course, so I thought I’d throw in a few different ways to say thank you—at least according to the list I “Googled” right before writing this. (Without looking them up, can you name all the languages offhand?)

At the top of the list, of course, is my wife, Cathy. More than anything, she keeps me centered and focused on all the things in life that are really important. I tell my sons they would do well to marry a woman much like her one day.
Thank you!

The kids come next: Miles, Ryan, Landon, Lexie, and Savannah, all of whom have been immortalized (in a teeny-tiny way) as the names of characters in my previous novels. To receive their hugs is to receive the greatest gift of all.
Muchas gracias!

And then? My literary agent, Theresa Park, always deserves my gratitude. The agent-author relationship can be tricky at times—or so I’ve heard from other agents and authors. In all honesty, for me it’s been nothing but fantastic and wonderful to have worked with Theresa since we first spoke on the phone way back in 1995. She is the very best; not only is she intelligent and patient, but she is blessed with more common sense than most people I know.
Danke schön!

Denise DiNovi, my friend and movie-accomplice, is another of the many blessings in my life. She’s produced three of my films—including
Nights in Rodanthe, Message in a Bottle,
and
A Walk to Remember
—which makes me one of the most fortunate authors in the world.
Merci beaucoup!

David Young, the fabulous CEO of Grand Central Publishing, has been nothing but supportive, and I’m lucky to work with him.
Arigato gozaimasu!

Jennifer Romanello, a publicist and friend, has made publicity an endlessly interesting and enjoyable experience for the past thirteen years.
Grazie!

Howie Sanders, my film agent and friend, is another member of the “I’ve worked with that author for a long time” club. And my life is better for it.
Toda raba!

Keya Khayatian, another of my film agents, is terrific and always generous with his time.
Merci!
or, if you prefer,
Mamnoon!

Harvey-Jane Kowal and Sona Vogel, my copy editors, are incredibly patient, considering I’m always so far behind on deadline. They have to catch all the little errors in my novels (okay, sometimes biggies, too), and unfortunately, I seldom give them much time. So if you find an error (and you might), don’t blame them. Blame me. They’re fantastic at what they do. To the both of you:
Spasibo!

Scott Schwimer, my entertainment attorney, is one of those guys who make you frown at lawyer jokes. He’s a great person and an even better friend.
Liels paldies!

Alice Arthur, my photographer, is always ready at a moment’s notice and takes a fantastic photo, for which I’m always grateful.
Toa chie!
Or
Xie xie!

Flag has yet again designed a wonderful cover.
Shukran gazilan!

Tom McLaughlin, the headmaster at The Epiphany School—a school that my wife and I helped found—has made my life richer and more full since we’ve been working together.
Obrigado!

P.S. The languages are: English, Spanish, German, French, Japanese, Italian, Scottish Gaelic, Hebrew, Farsi (Persian), Russian, Latvian, Greek, Chinese, Arabic, Portuguese, and Hawaiian. At least according the site I found on the Internet. But who can believe everything there?

D
eputy Keith Clayton hadn’t heard them approach, and up close, he didn’t like the looks of them any more than he had the first time he’d seen them. The dog was part of it. He wasn’t fond of German shepherds, and this one, though he was standing quietly, reminded him of Panther, the police dog that rode with Deputy Kenny Moore and was quick to bite suspects in the crotch at the slightest command. Most of the time he regarded Moore as an idiot, but he was still just about the closest thing to a friend that Clayton had in the department, and he had to admit that Moore had a way of telling those crotch-biting stories that made Clayton double over in laughter. And Moore would definitely have appreciated the little skinny-dipping party Clayton had just broken up, when he’d spied a couple of coeds sunning down by the creek in all their morning glory. He hadn’t been there for more than a few minutes and had snapped only a couple of pictures on the digital camera when he saw a third girl pop up from behind a hydrangea bush. After quickly ditching the camera in the bushes behind him, he’d stepped out from behind the tree, and a moment later, he and the coed were face-to-face.

“Well, what have we got here?” he drawled, trying to put her on the defensive.

He hadn’t liked the fact that he’d been caught, nor was he pleased with his insipid opening line. Usually he was smoother than that. A lot smoother. Thankfully, the girl was too embarrassed to notice much of anything, and she almost tripped while trying to back up. She stammered something like an answer as she tried to cover herself with her hands. It was like watching someone play a game of Twister by herself.

He made no effort to avert his gaze. Instead he smiled, pretending not to notice her body, as if he bumped into naked women in the woods all the time. He could already tell she knew nothing about the camera.

He knew full well what was going on. It happened a few times every summer, but especially in August: Coeds from Chapel Hill or NC State, heading to the beach for a long, last-chance weekend at Emerald Isle before the fall term began, often made a detour onto an old logging road that twisted and bumped for a mile or so into the national forest before reaching the point where Swan Creek made a sharp turn toward the South River. There was a rock-pebble beach there that had come to be known for nude sunbathing—how that happened, he had no idea—and Clayton often made it a point to swing by on the off chance he might get lucky. Two weeks ago, he’d seen six lovelies; today, however, there were three, and the two who’d been lying on their towels were already reaching for their shirts. Though one of them was a bit heavy, the other two—including the brunette standing in front of him—had the kind of figures that made frat boys go crazy. Deputies, too.

“We didn’t know anyone was out here! We thought it would be okay!”

Her face held just enough innocence to make him think,
Wouldn’t Daddy be proud if he knew what his little girl was up to?
It amused him to imagine what she might say to that, but since he was in uniform, he knew he had to say something official. Besides, he knew he was pressing his luck; if word got out that the sheriff’s office was actually patrolling the area, there’d be no more coeds in the future, and that was something he didn’t want to contemplate.

“Let’s go talk to your friends.”

He followed her back toward the beach, watching as she tried unsuccessfully to cover her backside, enjoying the little show. By the time they stepped from the trees into the clearing by the river, her friends had pulled on their shirts. The brunette jogged and jiggled toward the others and quickly reached for a towel, knocking over a couple of cans of beer in the process. Clayton motioned to a nearby tree.

On cue, their eyes swung that way. People were sheep, waiting for the next order, he thought. The sign, small and partially hidden by the low-slung branches of an ancient live oak, had been posted by order of Judge Kendrick Clayton, who also happened to be his uncle. The idea for the signs had been Keith’s; he knew that the public prohibition would only enhance the attraction of the place.

“We didn’t see it!” the brunette cried, swiveling back to him. “We didn’t know! We just heard about this place a couple of days ago!” She continued to protest while struggling with the towel; the others were too terrified to do much of anything except try to wiggle back into their bikini bottoms. “It’s the first time we’ve ever been here!”

It came out like a whine, making her sound like a spoiled sorority sister. Which all of them probably were. They had that
look.

“Did you know that public nudity is a misdemeanor in this county?”

He saw their young faces grow even more pale, knowing they were imagining this little transgression on their record. Fun to watch, but he reminded himself not to let it go too far.

“Where are you from?”

“I see some alcohol there. Are y’all twenty-one?”

For the first time, the others answered as well. “Yes, sir.”

“Okay, Amy. I’ll tell you what I’m going to do. I’m going to take you at your word that you didn’t see the sign and that you’re of legal age to drink, so I’m not going to make a big deal out of this. I’ll pretend I wasn’t even here. As long as you promise not to tell my boss that I let you three off the hook.”

They weren’t sure whether to believe him.

“Really,” he said. “I was in college once, too.” He hadn’t been, but he knew it sounded good. “And you might want to put your clothes on. You never know—there might be people lurking around.” He flashed a smile. “Make sure you clean up all the cans, okay?”

“I appreciate it.” He turned to leave.

Turning around, he flashed his smile again. “That’s it. Y’all take care now.”

Clayton pushed through the underbrush, ducking beneath the occasional branch on the way back to his cruiser, thinking he’d handled that well. Very well indeed. Amy had actually smiled at him, and as he’d turned away, he’d toyed with the idea of doubling back and asking her for her phone number. No, he decided, it was probably better to simply leave good enough alone. More than likely they’d go back and tell their friends that even though they’d been caught by the sheriff, nothing had happened to them. Word would get around that the deputies around here were
cool.
Still, as he wove through the woods, he hoped the pictures came out. They would make a nice addition to his little collection.

ROMAN (Lane Brothers Book 5) by Kristina Weaver
The White Knight by Gilbert Morris
The Making of Mia by Fox, Ilana
The Fairy Ring by Mary Losure
Made for You by Melissa Marr
This Is Paradise by Kristiana Kahakauwila
Forgotten by Barnholdt, Lauren, Gorvine, Aaron
Skyhook by John J. Nance
Murder in Havana by Margaret Truman
Lakeland Lily by Freda Lightfoot