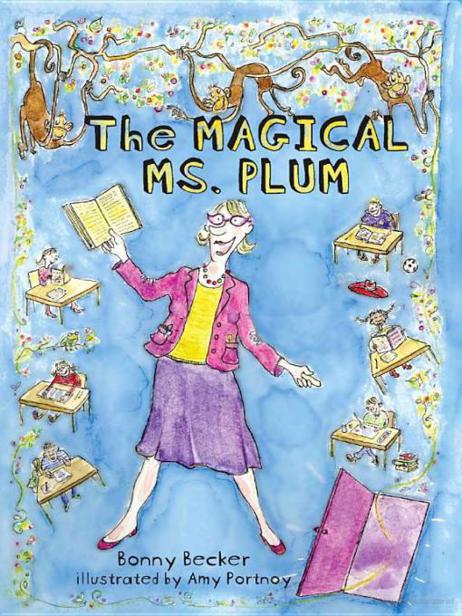 For Annie, who first listened
and first believed. Thank you
.

Ms. Plum had the best class in Springtime Elementary.

On a table by the window in warm, clean cages, Clyde, the hamster, skittered and chattered while a brown toad named Hip-Hop softly slumbered. They were nice animals and let everyone pet them.

On the walls hung posters that showed interesting things like the world’s biggest milk shake. It was banana and filled a swimming pool! On the shelves well-loved books lay in cozy piles.

Ms. Plum’s desk held a vase of plum flowers, an hourglass with plum-colored sand, and a basket. You can guess what was in the basket!

But the best thing of all about Ms. Plum’s room was the supply closet. Inside, the wooden shelves sagged with colored paper, jars of crayons, bottles of glue, comic books, rulers, and rubber bands. It smelled of chalk and chocolate and something lovely no one could ever quite name.

On this particular day, the day before the first day of school, Ms. Plum stood inside this closet, talking about her new third-grade students. But who was she talking to?

“Oh, indeed,” said Ms. Plum in her practical way to the paper and gum and sparkly markers. “They will be wonderful. Hopers and schemers, helpers and dreamers, jokers
and heroes. I can’t wait to meet each and every one.”

The crayons didn’t say anything. The erasers were silent, too. School supplies make very good listeners, but they never say much back.

Even so, there were odd murmurs and rustlings from the very back of the back of the closet, where the dark was as soft as black velvet.

“Yes, of course!” exclaimed Ms. Plum, “They will be the best class ever!”

And sighing happily, she plucked up a plum-colored marker and strode briskly back into the classroom to finish getting it ready for the big day.

The next morning, the sun rose just as it should. And at 8:48 a.m., Ms. Plum stood at the front of her classroom, her hands resting neatly before her as her new students scuffled and tumbled into class.

They looked at her and quickly looked away again, not wanting to show how excited or curious (or even a little scared) they were.

Nearly every student at Springtime Elementary knew there was something about Ms. Plum’s class. But the kids who had her in other years never said much. In fact, if you asked about her, funny things seemed to happen to their mouths. Their lips would open and shut, twist and turn, and finally something would pop out, like “We learned a lot about hermit crabs.” But they would have this smile. A secret kind of smile, and
suddenly, more than anything, you wanted to be in that class.

It was true Ms. Plum had a nice sort of tidiness about her. Her gray-blond hair sprouted up like wings behind her ears. Her plum-colored glasses, perched on her large, friendly nose, sprigged up into sparkly points. The eyes behind those glasses were a light brown color and as bright as a sparrow’s. But it had to be more than her friendly look, didn’t it?

Today, as the students settled into their new desks, Ms. Plum welcomed them to class and began to call roll. As the students raised their hands, Ms. Plum paused, studied each child, then wrote something on her list.

“Now then,” she said, smiling with bright-eyed interest. “Who wants to get me a pencil?”

Nadia was afraid to raise her hand.

Mindy Minn was carefully arranging her things in her desk.

Why bother? thought Jeremy. Why bother with anything at all?

She should have a pencil already. Teachers are supposed to have pencils, thought Becky Oh.

Darma gnawed at the bug bites on her knuckles.

Eric was trying to get Brad’s attention.

Brad and Tashala were too busy arguing to notice anything.

Carlos raised his hand, because offering to help the teacher showed them right away that you were one of the smart ones.

But Ms. Plum pointed at Tashala and said, “Tashala, could you get me a pencil, dear?”

Tashala, looking a little startled, stopped arguing and stared at her teacher. Ms. Plum cocked her head, her sparkly glasses catching the sunlight. She nodded toward the closet.

Tashala stood up, went to the closet, opened the door, and stepped inside.

And so began another year of Ms. Plum.

But first, let’s back up a little. About … three minutes should do it.

You see, Tashala Jones was going to be a cowboy. Not that she was going to be the boy part. Not that. But she intended to be rough and tough and wear spurs and chaps with no pink or purple anything.

For this first day of third grade, she wore her glossy new red cowboy boots, jeans, and a cowboy vest, so that everyone would know.

“Howdy … Cow-butt,” whispered Brad, who was seated behind Tashala and had known her since second grade.

“Shut yer trap, E-racer Face,” Tashala whispered back. And Brad did because Tashala had a mean left hook.

But soon Brad couldn’t help reopening
his trap. He began to murmur more cowboy insults. Tashala hissed back racecar driver insults, because that’s what Brad wanted to be, and neither noticed what Ms. Plum was saying till she pointed at Tashala and said, “Tashala, would you get me a pencil, dear?”

She nodded at the supply closet at the side of the room, and Tashala, although a little surprised, went to the closet and stepped inside.

She gazed at the jars of bright markers and fresh pink rubber bands, took a deep whiff of a strange, lovely smell (what was it?), and picked out a fat yellow pencil. Then she felt something brush against her ankle.

She looked down. A horse, no bigger than her mom’s purse, swished its tail against her leg and pawed its hooves. It was chestnut-colored, with a black mane and tiny rippling muscles.

“Look what I found!” Tashala cried, bursting out of the closet.

The little horse galloped out behind her.

“How lovely, Tashala.” Ms. Plum smiled and held out her hand for the pencil.