Read The Man She Married Online

The Man She Married 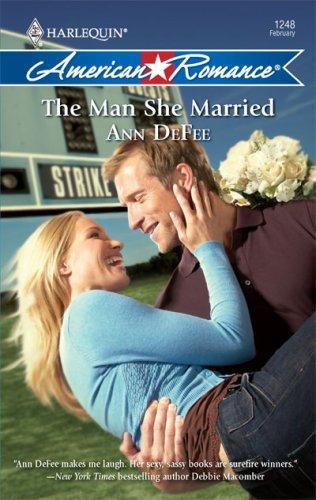 “Honey, are you ready for bed?” Maizie channeled her inner seductress as she struck a pose in the door.

“Clayton. Did you hear me?”

“Sure,” he answered, but didn’t take his eyes off the T.V. screen. “Let me catch the rest of the news and I’ll be right with you.”

The moron would rather watch the weather than make love? If that didn’t beat all! She counted to ten and decided to give him one more chance.

All Southern belles had an arsenal of tricks, and Maizie was no exception. She treated her oblivious husband to a little swish, a more pronounced sashay and a coup de grâce—a naughty hip grind—all done right in front of him for maximum effect.

Nothing. Absolutely nothing. This was war. Clay didn’t know it yet, but he was going to live to rue this day.

Have you ever thought about spicing up your love life? After more than twenty years of marriage, Mary Stuart “Maizie” Walker is ready for a little rockin’ and rollin,’ and that’s when she comes up with the perfect plan. She’s going to make her hubby jealous by flirting with the handsome tennis pro. However, that scheme, like the best-laid plans of mice and Southern belles, backfires—big-time.

Welcome back to Magnolia Bluffs, the hometown of Maizie and her cohorts in mischief—Liza and Kenni. There’s never a dull moment when the Steel Magnolias are up to their antics, and this time Mama and the aunts get involved.
The Man She Married
is fun, it's funky and I hope it makes you laugh out loud.

The Man She Married
A
NN
D
E
F
EE

Drawing on her background as a fifth-generation Texan, Ann loves to take her readers into the sassy and sometimes wacky world of a small Southern community. As an air force wife with twenty-three moves under her belt, she’s now settled in her tree house in the Pacific Northwest with her husband, their golden retriever and two very spoiled cats. When she’s not writing, you can probably find her on the tennis court or in the park with her walking group.

1155—SOMEWHERE DOWN IN TEXAS

1185—THE PERFECT TREE
"One Magic Christmas"

This book is dedicated to the terrific folks at
Harlequin who make our books a reality, with
special kudos to Megan Long, Paula Eykelhof and
Kathleen Scheibling. And a special thanks to my
good friends Geri Krotow and Debbie Macomber.

Without the help and support of these extraordinary
ladies I’d probably still be writing comprehensive
plans. And this is a whole lot more fun!

“Do these jeans make my butt look fat?” Mary Stuart “Maizie” Walker
realized
she was asking a no-win question. And she knew she was being unfair—honestly she did—but the devil on her shoulder kept poking her.

Clay, her husband of twenty-two years, glanced up from the paper. The expression on his was face was classic “deer in the headlights.” It was so typical it was almost humorous, and that partially explained why Maizie was going out of her way to shake up their “we’ve been married forever” life. She was determined to inject some rockin’ and rollin’ into their intimacy.

Intellectually she recognized she was in the middle of an empty-nest crisis. Hannah, her baby, was a freshman at Emory University in Atlanta. And although the school was only fifty miles from Magnolia Bluffs, she was missing her daughter like crazy. Okay, she wasn’t being rational, but who could blame her?

“Uh, well, uh.” Clay threw up his hands. “What do you want me to say? Lately, I can’t seem to get it right. I feel like I’ve walked into the middle of a pop quiz and I didn’t even know I was
in
school.”

Poor Clay. Maizie had loved him her entire adult life, and a good portion of her adolescence. That love hadn’t changed, so why was she being such a shrew? Lord love a duck, was she going into early menopause? Or was she merely losing her mind? For months there had been this pervasive sense of dissatisfaction that she couldn’t seem to shake.

Stop it right this minute! She had a wonderful life and it was time to get a grip.

“No answer?” Clay asked before giving her the same sexy wink she’d fallen for in the sixth grade.

“No,” Maizie admitted. She sat on his lap and put her arms around his neck. “I’m sorry. I’m just feeling funky.”

Clay nestled her against his chest. “I know, baby. I know.”

And he probably did. Over the years they’d achieved a Spocklike mind meld. Besides completing each other’s sentences, they were also able to communicate without saying a word.

Clay nuzzled her neck, paying special attention to her favorite erogenous zone behind her ear. When he did that Maizie couldn’t help but melt into a puddle of lust.

He was a laid-back kind of guy with a quirky sense of humor, which was only one of the many things she loved about him. Clay had the same twinkly blue eyes and shaggy blond hair that had caught Maizie’s attention in elementary school. Way back when he thought a spit wad attack was foreplay. Thank goodness his technique had improved since then.

“I don’t have to be at the shop until ten.” Maizie tried
her best flirtatious smile. “Do you think you could stick around for a while?”

Clay gave her neck one last nibble. “Oh, honey, I wish I could. Honest to God I do. But I have an important meeting with the Department of Transportation people.” Clay and his partner, Harvey, owned Magnolia Bluff’s premier engineering firm. “I can’t miss it.” He kissed the end of her nose. “I’ll make it up to you, I promise.”

“No big deal,” Maizie said as she jumped up and sashayed out of the room.

C
LAY WATCHED
M
AIZIE
walk away. Despite what she said, he knew it
was
a big deal. He was a smart guy and he’d been married long enough to recognize high dudgeon when he saw it. Lately he seemed to be screwing up all the time. Everything he tried blew up in his face, especially when it came to his wife, the sexiest, funniest, most appealing woman he’d ever met.

Maizie reminded him of a 1950s movie star—a cross between Marilyn Monroe and Pamela Anderson, sans surgical enhancements. She griped about the few pounds she’d gained, but as far as Clay was concerned her curves were perfect.

Straying had never entered his mind. His theory was why go out for chicken nuggets when you had cordon bleu at home, but lately, whew! The trouble had started when Hannah left for college and the situation was rapidly going downhill.

Maizie was the owner/operator of Miss Scarlett’s Boudoir. Her boutique was the emporium of all things girly in Magnolia Bluffs, Georgia, and it truly was the
happening place. So if boredom wasn’t the problem, what was it—other than missing her baby?

Then Clay froze as a horrible thought struck him. Was his wife getting tired of
him?
Maizie and Hannah were his entire world. He didn’t think he could survive without them.

God, he didn’t need this right now, not on top of the trouble at work. Thinking about the debacle at the office made him want to beat his head against the wall.

Then Clay had a brilliant idea. Even he could admit it was time to call in an expert and who better than her fraternal twin, Liza. They were about as simpatico as two people could be.

Add in their cousin Kenni Whittaker and you had the Three Musketeers. Yep, Liza and Kenni would know what to do.

Pleased that he had a game plan, Clay grabbed his car keys and headed off to work. He’d call Liza when he had a spare minute—not that he had many of those.