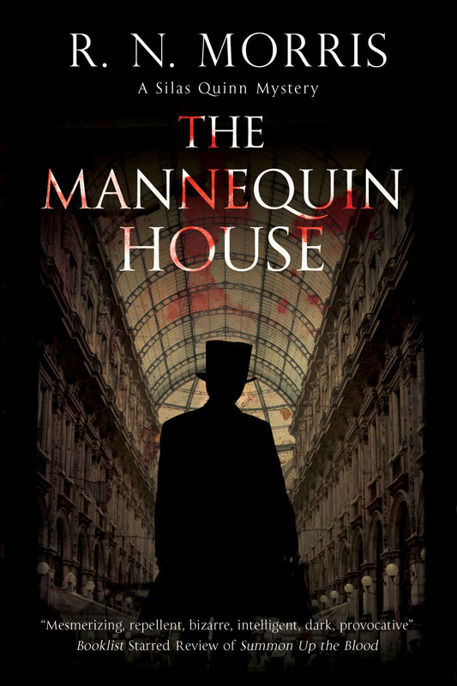 A Selection of Recent Titles by R. N. Morris

The House of Blackley

Speak of the Devil

The Monkey in the Tree

The Eyes of Miss Dillard

A Chip Off the Old Block

A Question of Conscience

The Door That Led Nowhere

An Interest in Keys

A World of Provision

A Selection of Recent Titles by R. N. Morris
The Silas Quinn Series

SUMMON UP THE BLOOD *

A RAZOR WRAPPED IN SILK

The right of R. N. Morris to be identified as the author of this work has been asserted in accordance with the Copyright, Designs & Patents Act 1988.

Benjamin Blackley is a fictional character. However, certain aspects of his story were inspired by the life of William Whiteley, the founder of Whiteleys department store, as described in Linda Stratmann’s fascinating account,
Whiteley’s Folly: The Life and Death of a Salesman
(2004, Gloucestershire: The History Press).

London, April, 1914
The House of Blackley

Inside the House of Blackley department store, a fashion parade was in progress.

The audience was highly exclusive. In fact, there were just two women watching, the countess, Lady Ascot and her daughter, the Honourable Caroline. They were seated beneath the Grand Dome, which formed the centrepiece of the recently remodelled building. Through the stained-glass cupola high above, a flood of colour-softened light suffused the vast space with a sense of promise.

Monsieur Hugo, the head of the Costumes Salon, called out numbers in French, each number corresponding to the next costume to be modelled. But there was a problem.
Numéro sept
had failed to appear.

‘Excusez-moi!’
said Monsieur Hugo, bowing sharply. He turned and poked his head through the curtain at the rear of the podium.

Backstage, six mannequins were in various stages of undress. Cries of protest met the appearance of Monsieur Hugo’s male face, which was now a shade of pink that matched the last dress modelled: cerise.

‘I said don’t forget you’re all supposed to be bloody French!’ Monsieur Hugo spoke English with a strong and surprisingly authentic south London accent. ‘We’ve got a real live
Your Ladyship
in today. Mr Blackley is hoping for great things from this showing. If Lady Ascot likes what she sees, she might spread the word among her upper-class friends. So it’s important to make the right impression. Speaking of which, where is Amélie? This isn’t like her. She’s normally so reliable. She is a
veritable
Parisian model. So professional. So slender. So beautiful.’

‘Well, she ain’ here!’ snapped a tall, wide-faced girl in her underwear.

‘My name’s Daisy, not bleedin’ Marie-Claude.’

‘You’d better not let Mr Blackley catch you talking like that! You know the penalty for profanities. It’s in the rules.’

Marie-Claude pulled a face that suggested she didn’t care what Mr Blackley caught her doing and cared even less for his rules, all 462 of them. This was far from the truth, as everyone knew. On the wages Blackley paid even the favoured mannequins, the sixpence fine he levied for any infringement was a serious blow.

A scrawny, moon-eyed girl in a pink slip followed the exchange closely. ‘You don’t think anything’s happened to her, do you, Monsieur Hugo?’

‘There’s nothing for you to worry about, Albertine.’ But Monsieur Hugo couldn’t quite keep the anxiety out of his voice. He clapped his hands as if to dispel it. ‘
Allez
,
allez! Giselle, porte-toi numéro sept! Maintenant!
’

‘I said you can wear number seven! Gawd, give me strength!’

Meanwhile, on the floor of the Costumes Salon, in front of the stage, Mr Blackley himself did his best to pacify his very important new customers.

‘May I offer Your Ladyships some refreshment? A cup of tea, perhaps?’ Despite being the son of a farm labourer, Blackley’s Yorkshire accent was of the genteel, almost effeminate kind. He had served his apprenticeship in a drapers’ store in Harrogate, learning to blend in by emulating the softer vocal tones of the ladies who frequented the shop. It was here that he had first discovered himself to be a profound, if not pathological, lover of women. His adoption of their speech patterns was just one expression of his love. It was here, too, that he had learnt how closely the arts of selling and seduction were related.

An aristocratic moue of displeasure appeared on the countess’s lips. And yet her eyes were lit with an enthusiastic fire as her gaze passed over Blackley’s head, taking in the full height of the Grand Dome. She let out an involuntary gasp at the sight of the great cupola. It seemed to float above six storeys of promise and desire, pulling the viewer ever upwards in an ascent of consumption.

Blackley allowed himself a self-satisfied smile. It would seem that the expense of the cupola at the time of the store’s reconstruction had been a good investment.

‘Vulgar,’ said Lady Ascot, suddenly remembering herself. She gestured a hand in the direction of one of the upper galleries, which was decorated with umbrellas and parasols of every size and colour. The bulbous canopies were like a line of overweight bottoms sticking out. Perhaps it was this that had provoked her judgement.

‘But Your Ladyship, the costumes we have for you today are very far from vulgar! On the contrary, we have for your delight only the very latest fashions, direct from Paris. The height of sophistication, I assure you.’

For all his charm Blackley was a hard-headed realist. He knew well enough that Lady Ascot would not normally be seen dead in an establishment like his. But like many aristocratic families, the Ascots had fallen on hard times. Buying her couture from a department store that had a reputation for value was just one of the economies she had been forced to contemplate, after her credit had been politely declined at a number of the more prestigious establishments.

But where these older stores saw a credit risk, Blackley saw a valuable marketing and publicity opportunity. He was composing the advertisement in his head as he bowed to his seated guests: The House of Blackley, Couturier to the Aristocracy.

Benjamin Blackley was a man of prodigious talents, as well as impressive facial hair. His distinctive mutton-chop whiskers framed a permanent expression of bland affability. Indeed, his ability to maintain this expression, even under trying circumstances such as the present, could be counted as one of his greatest talents. His most impressive creation was this face, utterly without guile or guilt. To look upon it, it was impossible to conceive that ambition had played any part in his rise to commercial pre-eminence. The face declared that Providence had surely smiled on Mr Blackley, undoubtedly because Providence found him to be a thoroughly amenable fellow.

‘Well, get on with it then!’ commanded Lady Ascot. ‘We don’t have all day.’

‘There has been a slight delay, Your Ladyship. To compensate you for which, I hope you will accept a complimentary item of millinery of your choice. That is to say, a hat.’

The countess’s eyes narrowed in calculation. ‘Only one?’

‘And one for Lady Caroline, of course.’ The old crone drove a hard bargain.

Lady Ascot gave a terse nod – but no thanks – to accept the deal. ‘This doesn’t give you licence to keep us waiting all day, Blackley.’

‘I will see what can be done, Your Ladyship.’

With his imperturbable smile in place, Blackley mounted the platform and extricated Monsieur Hugo from behind the curtain. ‘Well?’

Monsieur Hugo cast a nervous glance over his employer’s shoulder. His voice dropped to a conspiratorial whisper. ‘I thought you said I was to speak French at all times in front of our guests.’

‘I don’t have time for that now,’ whispered Blackley. ‘What’s going on?’

For a moment, Blackley’s calm exterior was ruffled. His brows descended, partially concealing his eyes. ‘Amélie?’ he said almost reverentially.

‘I’m getting one of the other mannequins to model her costumes,’ said Monsieur Hugo. ‘She should be ready in a moment.’

But Blackley hadn’t heard him. He was lost in contemplation of something private and precious. ‘Amélie?’ he murmured her name again, a half-appeal and half-complaint on his lips.

Then Blackley blinked once. A look of calculation came over him. His old equanimity was restored.

Waiting to go on in costume
numéro sept
, Giselle looked through a gap in the curtain to see Blackley’s uncharacteristic loss of composure. She turned to the other mannequins with a vindictive smile that suited her pinched face. ‘Amélie is in trouble now! Monsieur Hugo just told Mr Blackley.’

‘Do you think he’ll fine her?’ asked Minette with an anxious shudder.

‘Fine her? I shouldn’t be surprised if he gives her a good beating,’ said Marie-Claude.

‘He wouldn’t do that, would he?’ said Albertine, her eyes wide with fear.

‘You read what it said in
The West End Whisperer
,’ said Michelle. The girl appropriately dropped her voice to a cowed whisper. The latest edition of that scandalous magazine had been passed around the employee dormitories and lodging houses. Its
exposé
of what life was really like inside the House of Blackley was not news to any of the six hundred people who worked there, but still it was shocking to see it printed in black and white. What had been rumour and gossip was now elevated to the status of fact. ‘He took a stick to a fellow just for yawning in front of him!’