Read The Marquess of Cake Online

The Marquess of Cake 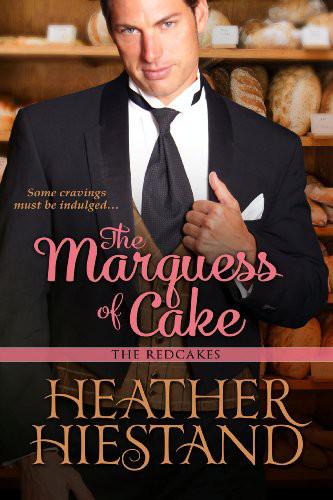 BOOK YOUR PLACE ON OUR WEBSITE
AND MAKE THE

We’ve created a customized website just for our very special readers, where you can get the inside scoop on everything that’s going on with Zebra, Pinnacle and Kensington books.

When you come online, you’ll have the exciting opportunity to:

• Check out author bios and background information • Send e-mail to your favorite authors • Meet the Kensington staff online • Join us in weekly chats with authors, readers and other guests

Copyright © 2013 by Heather Hiestand All rights reserved. No part of this book may be reproduced in any form or by any means without the prior written consent of the Publisher, excepting brief quotes used in reviews.

All Kensington titles, imprints and distributed lines are available at special quantity discounts for bulk purchases for sales promotion, premiums, fund-raising, educational or institutional use.

Published in the United States of America
For Michael, Katherine, and Fenimore Hiestand

Many eyes reviewed all or portions of this novel, making it better each time. Thank you to Viola Estrella, Shoshanna Evers, Eilis Flynn, Mary Jo Hiestand, Delle Jacobs, Joleen James, Judy Laik, Isabel Mere, Gina Robinson, and Jacquie Rogers for your thoughts. Thank you to Andy for the many hours spent in front of cake decorating television shows. I wouldn’t have written this story without them and you. Thank you to Leander, Mary Jo, David, Pat and Katie, and Elizabeth and Delle, for supporting this writer in all her endeavors.

Lastly, thank you to Peter Senftleben and the Kensington team, and Pam van Hylckama Vlieg and the Larsen Pomada team, for making this book (and series) a reality.

Michael Shield, Marquess of Hatbrook, breathed in the mouthwatering scent of pastries drifting through the open iron gates of the corner shop at Oxford and Regent Streets. The window display of scones and shortbreads, sponges and meringues, and wafers and biscuits, reminded him of all the exquisite flavors to be had within.

He paused for a moment to admire the arrangement. A young woman, who was sheltered head to toe by a dark cloak, jostled his arm. She smelled like cake.

“My apologies.” She glanced in his direction, so that he received an impression of fierce, dark eyes, then turned her head to her companion. “I won’t be ordered into the country like I’m some sort of ornament for a hunting ball.”

“Too right, Alys,” agreed the shorter girl, striding briskly alongside. She, not as well dressed as the first girl, wore a shabby jacket and bonnet.

“I like my work too much to leave it,” said the cake-scented girl as the pair swept through the shop gates.

Cake
. Redcake’s Tea Shop and Emporium was heaven right here  in London. Heaven and hell, because if he partook of such a treat his hands might stop trembling and his thoughts might clear, but then, in less than an hour, the cycle would begin anew. A minor medical matter, to be sure, but an irritating one.

Only vigorous exercise kept his body trim, thanks to his frequent indulgences. Still, one small bun, perhaps a slice of fruitcake?

He caught the door with the hooked handle of his umbrella as the women dashed toward the bakery on the right. As he moved through the entryway to the tearoom on the left, he took a deep breath of yeasty goodness.

“Hatbrook, you degenerate! Just the chap I need!”

He spotted an old Oxford chum waving from a window-side table and made his way through the afternoon crowd. His friend, Theodore Bliven, mahogany curls in careless disarray as usual, moved a stack of newspapers, clearing a space for the bill of fare. A pert waitress, or “cakie” as they were called, placed the sheet in front of Michael before he’d even had time to remove his hat.

“Best girls in town, aren’t they?” Theo said. “I tried to hire one away to staff our house, but old Redcake pays them too well for that.”

“He isn’t being knighted for being a stupid tradesman.”

“He isn’t being knighted for being a good one either,” Theo chuckled. “I hear it’s because the queen can’t resist his Scotch trifle.”

The trifle was a rather extraordinary Christmas treat. “Why are you following the investiture lists?”

“It seems they’ll knight anyone these days.” Theo poked his finger into the newspaper. “That name sounds familiar.”

Michael made a face. “My man of business.”

“Yes. When we were up at Balmoral this past summer, he fished one of the young princes out of the lake.”

“Why did you invite him to Scotland?”

“He brought me some figures regarding my winery expenses. I needed the information and his expertise.”

“A pity. That knighthood will give him airs.”

He did sense a change in the air at his solicitor’s office today.

“You’re an old Sussex man. I need a recipe for cockles. It’s revolting what they do with them at my club.”

Michael reflected. “I like them in a pie, myself, with salt pork and onions. But why are they serving peasant food?”

“Hmmm. Some of the old men like them, I suppose. They’re always in a revolting white wine sauce.”

“Maybe they use cheap wine?”

“Like the kind that comes out of your vineyard?” Theo poked Michael’s leg with a damp boot.

Michael moved his leg to the left. Just because his piece of England was the sunniest part of the country didn’t make it the best spot for grapes. Still, his vineyard turned a small profit these days.

“Gentlemen?” asked a cakie in a businesslike tone. “What may I bring you today?”

Michael considered her. The young woman with elfin features didn’t look familiar, but she smelled delicious. With a start, he realized she’d been the cake-scented girl who jostled him just a few moments ago outside. He wondered why she’d prefer waiting tables to a trip to the country.

Michael forced his eyes from the avowed city girl’s generous curves, which were ornamental indeed. He couldn’t get that blasted Scotch trifle out of his head. The memory of that heather-honey flavor of the Drambuie in the sponge, reminding him of simpler times, had his mouth watering anew.

“A dish of the special holiday trifle, if you will, and coffee.”

“I’m so sorry, sir. We’re all out.” The cakie’s voice didn’t change tone as she delivered this tragic news.

“That’s ‘your lordship,’ young miss,” Theo said, mischief dancing in his eyes. “You can’t refuse trifle to the Marquess of Hatbrook.”

A woman at the next table gasped and nudged her neighbor, whispering, “A marquess, that is!”

The cakie swallowed sharply, but then her pointed chin went up.

“I’m sorry, your lordship, but it’s all gone to Buckingham Palace for a celebration.”

“Buck House,” whispered the other gossip at the next table. “How fancy!”

An attractive girl with heat in her eyes was as welcome as Scotch trifle. He wondered if she ever put those rosy lips to use in other passionate endeavors. “Instead, I’ll have a plate of scones with honey.”

A gasp went up from the other table. “Did she just offer his lordship spirits? I thought this was a respectable place?”

The cakie flushed scarlet, but her chin stayed up. Her gaze had regained the besieged fire he saw outside.

“That won’t be necessary.”

Her clipped tone had him glancing at her again. Those eyes were as dark as Theo’s, but the high color and pursed full lips told him of her pique. Though a cap covered most of her hair, he could see, not surprisingly given her temper, that her hair was a carroty red, though smooth and shiny at the part. All together, a young woman with spark, and he wondered again why she would want to spend her days here. Of course, times were hard, and poverty sent many girls into the workforce. Since the girls wore black dresses of a conservative cut with white aprons, they offered no hint of individuality, though he thought this particular girl was the least subservient cakie he’d ever run across.

The girl’s gaze captured his and he realized he’d been staring.

Her forehead and cheeks flushed crimson. “I-I’ll get your order for you, your lordship.”

She darted away, skirts fluttering, offering a glimpse of trim ankle. Fetching, very fetching indeed. He wondered what she’d look like in a ball gown under gaslight, with her hair aglow and her pale skin enhanced by golden glamour.

He started, the smell of pastry and Theo’s grin reminding him where he was. Only the cakie’s delectable scent of cake and, yes, orange flower water, had him thinking these sensual thoughts about a working girl. He had no time for romance, either marriage or dalliance-minded, not with the time it took to float money from holding to enterprise to mortgage, as he rebuilt his family fortune from the mess his father’s gambling had created.

“Are you staying in town through the holidays?” Theo inquired.

“Maybe you’ll get some trifle tomorrow then.”

“I’m sure the royal family will hoard it to their collective bosom,” Michael said.

“I once thought you might marry into the royal family,” Theo said.

“Since you are an intimate.”

“Ah. The queen’s children are all married off now.”

“Your mother must be disappointed,” Theo observed.

“She’d like someone very grand for my sister, at least. Beth is seventeen now, if you can believe it.”

Theo winked. “She’s much prettier than you. I’ll take her off your hands.”

Theo sighed theatrically. “I have prospects. Only three elderly bachelor cousins have to die before a title comes to my side of the family.”

“Yes. There’s a good chance I’ll be an earl by the time I’m fifty.”

“Plan to live that long, given your propensity for trouble?”

“My mother is forty-seven,” Michael said, toying with Theo’s plate. It was covered with crumbs and he wondered what Theo had been eating. It looked like a red, seedless jam had been involved.

“I’m sure she looks much younger.”

“She does try. All that trying is quite expensive. I think I’ll marry a woman who isn’t obsessed with her appearance.”

“My plan is to tell her how beautiful she is on a regular basis, so she doesn’t get any ideas that she is losing her looks.”

“Sound in theory, but do you think women really listen to their husbands?”

“Mine will. I’ll only marry a sweet, biddable girl, not a termagant like Mother.” Remembering the cakie, he added, “One who enjoys rusticating far more than the hustle and bustle of the city, like I do.”

His stomach rumbled in anticipation when their cakie crossed the floor, holding a plate of scones with a small dish of honey and a cup of coffee on a tray. As the girl passed the table with the gossips, one of the ladies gesticulated wildly. Her arm caught the tray. The cakie jerked back nimbly enough, but the tray dislodged from her hands when the lady threw up her arm yet again. The cakie rocked on her heels and, in seeming slow motion, began to fall backward.

Too Much at Stake by Pat Ondarko
Tales From Otherworld: Collection One by Yasmine Galenorn
Read To Me by Nona Raines
The Lightkeeper's Daughter by Iain Lawrence
Sherlock Holmes - The Stuff of Nightmares by Lovegrove, James
Sassy Ever After: Wise Sass Mates (Kindle Worlds Novella) by Tasha Black
Butter by Erin Jade Lange
Alice Munro's Best by Alice Munro
Follow Me Back by Nicci Cloke
Liberty At Last (The Liberty Series) by James, Leigh