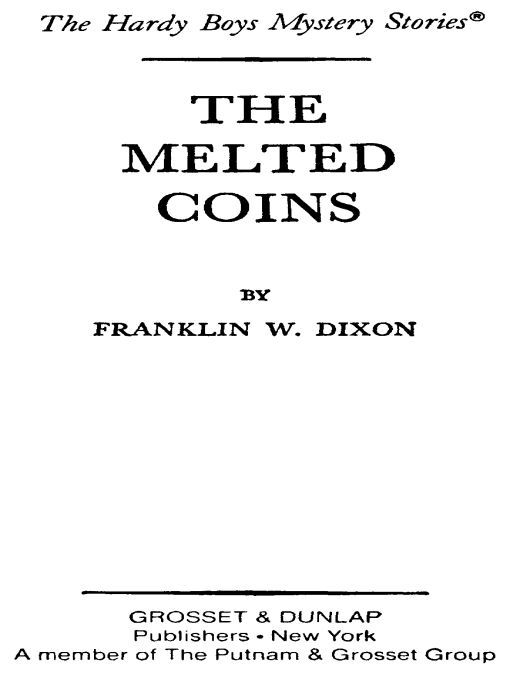 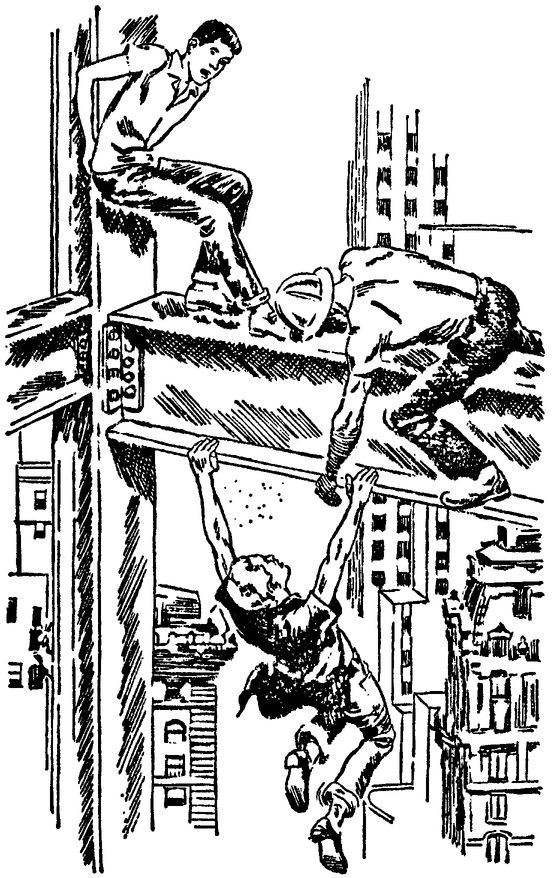 CHAPTER I
Highway Trouble
CHET Morton strode about the Hardys' living room, waving a white booklet. “I tell you, fellows, I'll be a college man in just a few months!”
Joe Hardy, blond-haired and seventeen, looked skeptical. “A six-week summer course at Zoar College in New York State will get you a full year's credit?”
“Of course. It says so right here.”
Joe's brother Frank, dark-haired and a year older, took the brochure and scanned it. “Listen, Chet. I wouldn't pay more than the twenty-five dollars' application fee until I saw the place!”
Just then his father entered. Fenton Hardy, an internationally famous detective, was a tall, athletic-looking man.
“Did I hear you mention Zoar Valley?” he asked. “If you're going there, how about doing some sleuthing for me?”
Joe grinned. “Any time, Dad. What's it all about?”
Mr. Hardy seated himself in an armchair. “It has something to do with the Indians at the Seneca Reservation near Zoar Valley. Rod Jimerson, a Seneca who lives in Cleveland, phoned me recently asking me to take a case for him. It involves somebody known as Spoon Mouth.”
“Spoon Mouth?” Chet said. “Reminds me of food.” He called to the boys' aunt as she passed the kitchen door. “Oh, Aunt Gertrude, could you make me a cream cheese and salami sandwich?”
“Here we go again!” Joe ribbed their roly-poly buddy, who would rather eat than sleuth. “I suppose you want the salami lean and the crust trimmed from the bread.”
“What else?” Chet said breezily. He handed the Zoar College brochure to Frank and lumbered into the kitchen.
Mr. Hardy's peppery spinster sister disapproved of the detective work in which her nephews were constantly involved. She scolded them often for getting themselves into dangerous situations, but her affection showed through, especially when it came to cooking up a tasty dish.
With a deftness born of long practice, she now whipped a sandwich onto the kitchen table and placed a tall glass of milk beside it. Chet made short work of the treat, then rejoined Frank, Joe, and their father, who was studying the catalog.
“I think you'd better check up on this college, Chet,” Mr. Hardy said. “It seems like a very small faculty.”
“That's right, sir. I figured that it's pretty exclusive. Only the best professors.”
“Or else the leftovers,” Frank said.
“Well, you've got a few weeks before it opens,” the detective said. “It might not be a bad idea to drive out there and look the place over.”
“That's right,” Joe said. “And if we find Spoon Mouth, we'll see if he has a bigger appetite than Chet!”
Mr. Hardy said that he hoped he was not sending them on a wild-goose chase. “I'd go myself,” he declared, “but I'm working on a mail fraud case and can't get away.” He added that the call from Rod Jimerson had been garbled. “The connection was bad, and finally we were cut off. But I have his address in Cleveland.”
“Hey, I have an idea!” Chet spoke up. “You know, I sent my application to the Zoar College offices in Cleveland. Maybe we can kill two birds with one stone and check there first!”
“Good idea.” Joe was enthusiastic. “When do we leave?”
“How about tomorrow?” Chet asked.
“Okay,” Frank said. “Let's start about six in the morning. We can take the New York Thruway for a good part of the trip.”
By the middle of the next morning, Bayport had been left far behind. Chet lolled in the back seat. Frank was driving. Long before noon, Chet complained of a maddening hunger. The trio stopped for gasoline, hot dogs, and cold drinks. Then Joe spelled Frank at the wheel.
At an even speed they passed through the beautiful rolling country of New York State. The highway divider was sometimes a meadow, sometimes a craggy island of trees.
As Joe drove up a hill Chet called out, “Hey, look at that guy! He's having trouble!”
A quarter of a mile away, in the opposite lane, a car approached with front wheels wobbling. Joe slowed down and pulled onto the shoulder to watch the crippled vehicle.
Suddenly it swerved onto the center island and careened over the grass.
“Holy Toledo!” Joe said. “He's going to hit us!”
He gunned the motor, whipping up gravel as the convertible shot forward. The oncoming car missed them by inches, rolled into a ditch, and landed on its top, all four wheels spinning.
Joe set the emergency brake and the three boys jumped out and ran to the wreck. Inside they saw a man and woman, both elderly, struggling to get out. In the rear seat were two huge German shepherds.
“Good night! Look at those dogs! Chet said. 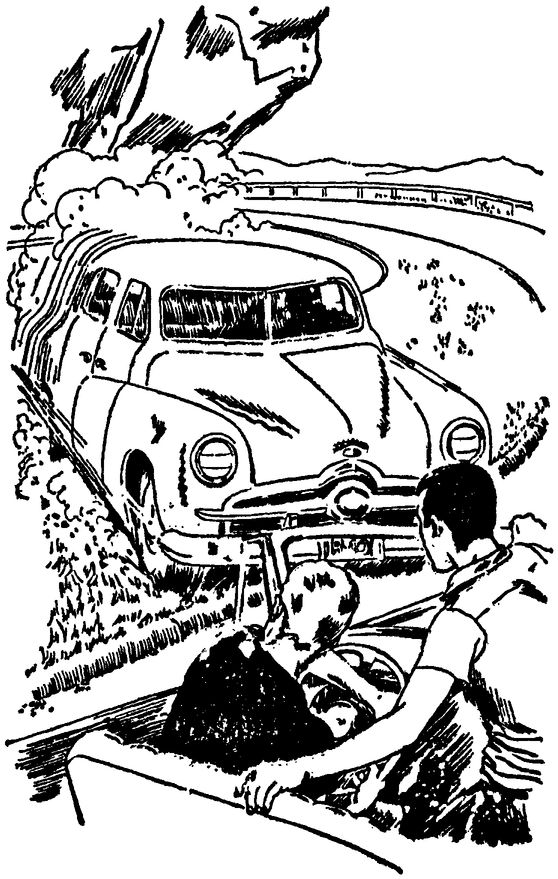 “He's going to hit us!” Joe cried out
He gingerly opened the rear door while Frank and Joe took care of the people in front. They were pulled out, dazed, but there was no sign of serious injury.
The dogs, too, looked befuddled. Chet found their leashes in the rear and snapped them onto the collars of the groggy beasts.
“Better sit down on the grass,” Frank said to the couple as he and Joe eased them onto the ground. Chet tethered the dogs to the door handle, then examined the front wheels, which by now had stopped spinning.
“Your steering is shot!” he said. “How did it happen?”
The man smiled wanly. “I don't know. All of a sudden I couldn't control the car and tried to push the brake.”
“I think you must have gotten excited and hit the gas instead,” Joe said, “the way you shot across the median strip.”
The woman spoke for the first time. Her hands were shaking as a result of the shock. “They've been calling back a lot of cars recently. Maybe this is one of the faulty ones.”
“Well, your garage mechanic will find out soon enough,” Frank said. “Do you live around here?”
“No, we live in Hawk Head,” the man replied. “I'm Dr. Rideau and this is my wife.”
As the boys introduced themselves, cars driving by were slowing down to rubberneck at the wreck and soon a State Police car pulled up. Frank told what they had seen and added, “It was a miraculous escape, Officer. They seem to be okay.”
“We can't take chances,” the policeman replied. “I'll get an ambulance.” He walked to his car and radioed for help.
Frank, Joe, and Chet gave their names as witnesses to the accident, then said good-by to the Rideaus.
“I'm a retired dentist,” the man said, shaking Joe's hand. “You have been very kind to us. If you should find yourself in our area, please drop in to see us. RememberâHawk Head, New York.”
“You must come for dinner,” Mrs. Rideau added.
Chet beamed. “You bet we will. Thanks for the invitation.”
The boys proceeded without further incident the rest of the day. It was night before they reached Cleveland, and they found a comfortable motel at the edge of the city. Tired from the long trip, they went to bed right after dinner.
“We'll look up Rod Jimerson first thing in the morning,” Frank said.
“Wait a minute,” Chet pleaded. “Since you're so suspicious of Zoar College, why don't we go there first? If it's a phony, I want my twenty-five dollars back.”
“I thought you were convinced it was a great college,” Joe reminded him.
ADS
15.4Mb size Format: txt, pdf, ePub