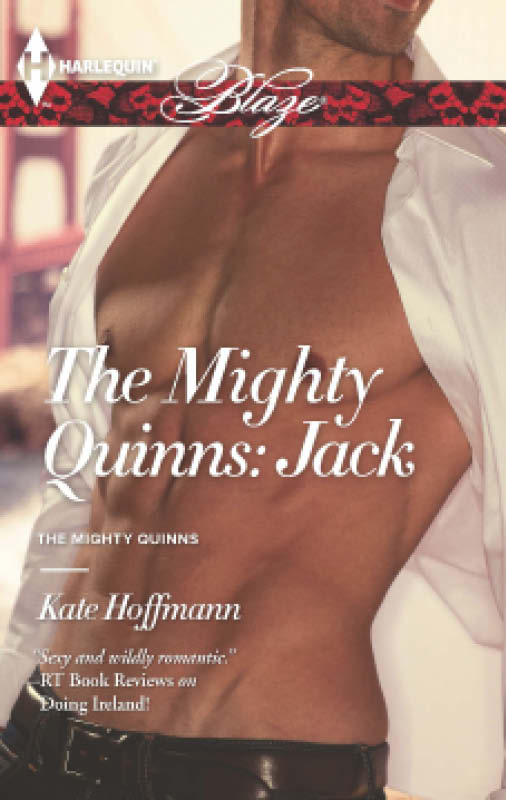 Jack Quinn has always been his widowed mother’s fiercest protector. So, when his mom decides to reunite with her childhood sweetheart all the way out in California, and there’s no question—Jack’s going with her, and to hell with the consequences….

Mia McMahon isn’t exactly thrilled about her wealthy father dating a woman from his past. She smells a gold digger. But once she meets Jack, she forgets all about getting his mother out of the picture—and focuses on getting him into bed!

The attraction between Mia and Jack is intense, irresistible...and breaks every rule in the book. Then again, everyone knows that the most delicious affairs are the forbidden ones....

“This truly delightful tale packs in the heat
and a lot of heart at the same time.”
â
RT Book Reviews
on
The Mighty Quinns: Dermot

“This is a fast read that is hard to tear the eyes from. Once I picked it up I couldn't put it down.”
â
Fresh Fiction
on
The Mighty Quinns: Dermot

“A story that not only pulled me in,
but left me weak in the knees.”
â
Seriously Reviewed
on
The Mighty Quinns: Riley

“Sexy, heartwarming and romantic, this is a story to settle down with and enjoyâand then reread.”
â
RT Book Reviews
on
The Mighty Quinns: Teague

“The only drawback to this story
is that it's far too short!”
â
Fresh Fiction
on
The Mighty Quinns: Kellan

Authors get ideas for books in the funniest places. I came up with the concept of
The Mighty Quinns: Jack
while talking with a friend. He was telling me about his mother’s sudden move from Wisconsin to Arizona—all because of a rekindled romance from forty years ago! I immediately began to question him in earnest. After all, how romantic is that—that childhood sweethearts would find each other again after so many years?

Of course, I needed to make a few alterations, but in the end, that one snippet of conversation was enough to build a story.

This kind of thing can sometimes cause a problem for me, though. Conversations I share with my friends are often filled with long pauses, as I play “what if” in my head. If I find something interesting in a comment, I start an interrogation. And my friends sometimes unexpectedly find themselves in my books.

But I guess that’s a risk you take when you become friends with a writer. :)

Kate Hoffmann has written more than seventy books for
Harlequin, most of them for the Temptation and Blaze lines. She spent time as a
music teacher, a retail assistant buyer and an advertising exec before she
settled into a career as a full-time writer. She continues to pursue her
interests in music, theater and musical theater, working with local schools in
various productions. She lives in southeastern Wisconsin with her cat,
Chloe.

REUNITED
THE PROMISE
THE LEGACY

Thanks Paul S.!
This book is for you (and your mom)!

A
ILEEN
Q
UINN
KNELT
over the bed of pansies, digging into the soil with her trowel until she'd broken up the clumps around the plants. The wind was chilly and the weather rolling in from the Atlantic was sure to bring rain. But it was spring in Ireland and she was alive to enjoy another summer. At age ninety-six, one couldn't ask for much more.

She braced her hands on the tall handles of her gardening bench and slowly got to her feet. Every day was a blessing, she mused. And with each day came the hope that she would find more members of the family that she'd lost all those years ago.

As one of Ireland's most famous novelists, she lived a charmed life. But it hadn't started that way. She'd been raised in an orphanage, her father killed in the Irish uprising and her mother dead of consumption when Aileen was two. She had spent her life alone, without a single blood relative to call family.

But then, in the midst of doing research for her biography, she learned of her four older brothersâDiarmuid, Conal, Lochlan and Tomas,
who had been sent from Ireland by her mother, hoping that her boys would make lives of their own in a more promising place.

Her investigator, Ian Stephens, had already tracked down one descendant, a lovely young man named Logan Quinn who ran a horse-breeding farm outside Brisbane, Australia. He'd also found Logan's parents who had recently visited her in Ireland. She'd given David Quinn and his son, Logan, a sizeable gift from her estate, almost a million dollars each.

Aileen smiled to herself. She had so much money and nothing to do with it. Better that it went to help her family. They were the people who'd be her legacy, the children and grandchildren and great-grandchildren of her lost brothers.

Aileen glanced over her shoulder to see Ian Stephens standing at the garden gate. “Hello,” she said with a smile. “Either you're early or I've lost all track of time.”

“It's half past eleven,” he said. “That was when we were supposed to meet, wasn't it?”

She pulled off her gardening gloves and dropped them onto the padded bench. “Yes, it was. Come, let's get out of this dampness and in front of a warm fire. I'm cold to the bone.”

Ian offered her his arm as they walked through the garden then onto the wide terrace and into the house. Sally, her housekeeper, appeared almost immediately and helped Aileen out of her jacket. “I've laid a fire in the parlor,” she said. “I'll bring you tea.”

“Thank you, Sally. And bring a cup for yourself. Mr. Stephens has come with news, haven't you, Mr. Stephens?”

Aileen nodded. “Then I think we'll also need some of your blackberry scones, as well, Sally. And real butter, not that terrible paste you and Doctor Arnett insist I eat. I'm nearly ninety-seven years old. What harm will a few bites of butter do me now?”

“Yes, ma'am,” Sally muttered, sending Ian a secret smile. “But I'm sure Mr. Stephens doesn't keep his trim figure by gobbling down butter every chance he gets.”

Ian forced a smile, then cleared his throat. “I'll have butter,” he said.

He extended his arm and Aileen slipped her hand into the crook of his elbow. “Let's go find a quiet place to talk, shall we?”

The stone country house was warm and cozy, filled with comfortable furnishings and items she'd collected over a lifetime. They walked to the parlor and Aileen sat down in the chair closest to the fire.

They chatted about the weather until Sally returned with the tea tray. She poured them both a cup and then found a spot for herself on a nearby sofa.

Aileen held out a plate of scones. “Have one. Sally bakes them for me every day. They are the only indulgence left to me, I'm afraid.”

As he munched on a scone, Ian opened his portfolio and withdrew a folder, holding it out to her as he wiped his other hand on a linen napkin.

She hesitated before taking it, knowing that the information inside would open yet another door to her past. There were times when the regrets outweighed the joy. “Tell me,” she said. “Who have you found?”

“Conal,” Ian said, setting his scone down. “And it wasn't a simple task.”

She opened the folder to find a copy of a faded photograph. Though she wanted to recognize the face, the subject of the photograph was a stranger. “He's a handsome lad,” she said. “I wonder if he resembles my father?”

Ian sat quietly as she studied the photograph. When she looked up at him, he continued. “Conal was hired out as an apprentice to a printer in Cork. Unlike many, this man valued education and Conal attended school until he was sixteen. In his early twenties, he left Cork and started writing for the Irish Independent in Dublin. And when the war broke out in Europe, he covered it. I've copied some of his articles.”

“Yes, ma'am. And quite a good one from what I could see.”

“I used to read that paper,” Aileen said. “I might have seen his name.” She laughed softly. “If only we might have met. But then, would we have known each other?”

“After the war, he made his way to the U.S. where he settled in Chicago and founded an Irish weekly. He married at age 45 and had two children, a daughter, Mary Katherine, who became a nun, and a son, John, who married in 1975. John had three children, two daughters, Kristina and Katherine, and a son, Jack.”

Aileen picked up another photo, turning it over to find the name written on the back. “Jack Quinn.”

“He's a sports writer,” Ian explained. “And his sisters are both high school teachers.”

“He followed his own father into the newspaper business, but he died of a heart ailment a few years after his youngest daughter was born. From what I've uncovered, the family has struggled, but they are now living comfortably.”

“Have you contacted them yet?” Aileen asked.

“Not yet. I'm leaving for Chicago at the end of the week.”

Aileen closed the folder and hugged it to her chest. “I'd like to meet them. The whole family. You'll arrange it, won't you? Do all you can to convince them to come?”

“Kristina and Katherine are married and have young children.”

“Well, then, I'm looking forward to entertaining little ones. I've never had children in this house. It's about time I did, don't you think?”

“I'll ring you as soon as I've contacted them,” Ian said.

He moved to get up but she waved him back into his chair. “You don't have to rush off,” she said. “I enjoy your visits.”

She reached for a photo sitting on the small table next to her chair. “Have I shown you this? Logan sent it to me. He and Sunny got married last month. I was invited to the wedding, but I don't travel much anymore.” She stared down at the couple in the photo, Logan dressed in a smart suit and Sunny in a simple flowing dress. They looked so happy, starting out their life together. She handed the picture to Ian.

“They are a lovely couple.”

“It's the only regret I've ever had, you know. That I never married and had children.” She sighed softly, then put on a bright expression. “I sent them a wedding present. Two handmade Irish riding saddles. They were very pleased. I just got a letter from them last week.”

Aileen sat back in her chair and watched as Ian devoured another scone. She was beginning to like this young man. He took his work very seriously, which was a good thing for her. But she worried that he might not have enough time for a personal life. A young man like him ought to be thinking about marriage and a family.

Family was the most important thing in life, she mused. Everyone should have a family to love and treasure. And before the year was over, she hoped to be able to add to the three family members she'd already found, for then, she would be truly rich.