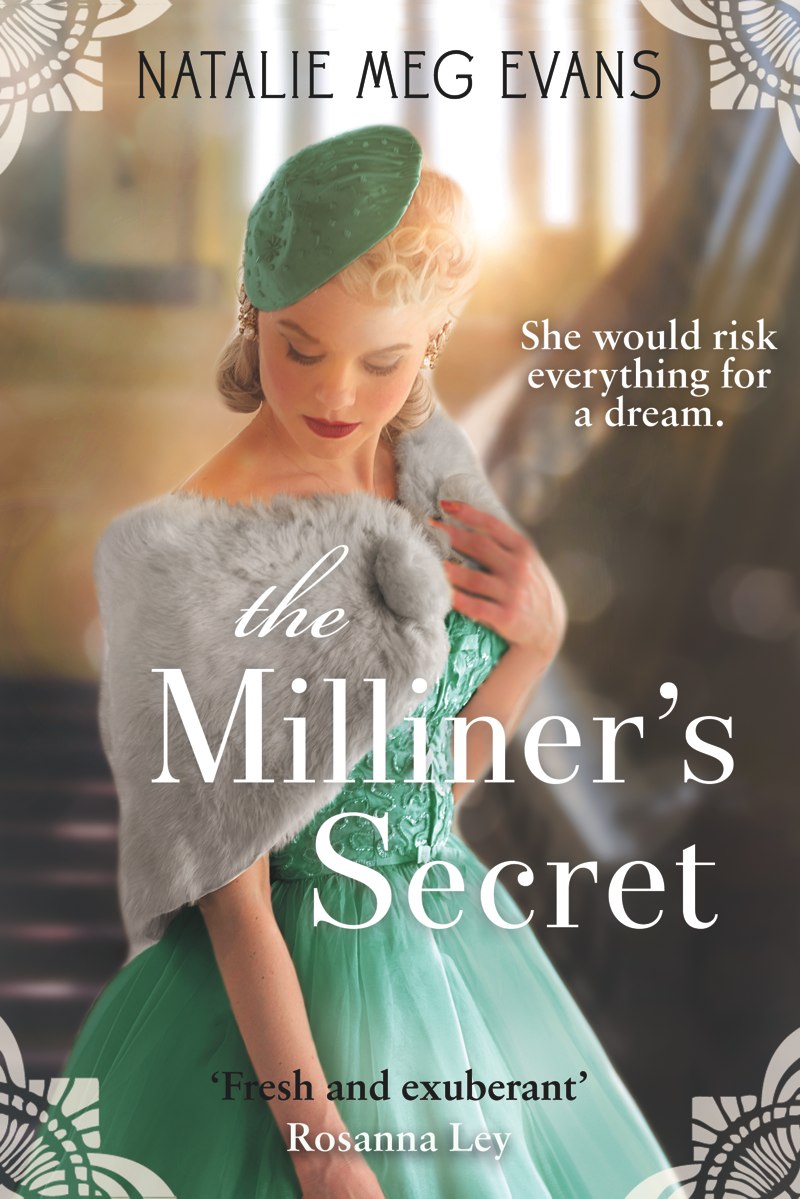 This book is dedicated to my sister Anna

They would have been a spectacular sight in any city at any time. Bare shoulders, impish hats and upswept hair. One, a blonde in her mid-thirties, crossed the dance floor on a zephyr of sex appeal. A younger blonde walked as if she suspected the room was infested with snakes. The third, a redhead, followed like a sleepwalker.

A band pumped out a hot jazz version of ‘La Marseillaise’ – so loud, bottles on the bar shimmered. ‘They know it’s illegal to play that, don’t they?’ The younger blonde, whose name was Coralie de Lirac, glanced uneasily at the stage. ‘Nobody’s dancing.’

‘It’s too damn early,’ said the older one. ‘I can’t get used to being in a nightclub at teatime.’

A month before, hours after they had marched into Paris, the Germans had moved the clocks to Berlin time and imposed a curfew that effectively sealed people into their homes. Then, realising Paris would grind to a halt, they’d relaxed the curfew to midnight. If you stayed later, you were stuck wherever you happened to be until five the next morning. But, then, Coralie reminded herself, the Nazis hadn’t invaded France for the convenience of its inhabitants. ‘Let’s get a table,’ she said. ‘Don’t make eye contact with anything male under ninety. Una? Keep your mind on the job.’

‘Of course. Though we may have to kiss a toad or two before we find what we’re looking for. Oh, don’t take fright, Tilly dear.’ Una McBride threw an arm round their redheaded companion, who had stopped dead at the word ‘toad’. ‘Coralie and I will take care of such niceties. Or “un-pleasantries”, which will be closer to the truth.’ Una’s drawl marked her out as American.

Coralie indicated a table. ‘Over there. Come on, or we’ll be mistaken for the floor show.’ Before they got much further, though, the club’s proprietor spotted them and ushered them to a table of his choosing, closer to the music and the bar. A young man with a boxer’s physique, he wore a white tuxedo and a rose in his buttonhole. ‘Mesdames, enchanted. Welcome to the Rose Noire.’ He kissed their hands in turn, lingering over Coralie’s. ‘Mademoiselle de Lirac, you have been away too long.’

‘I’m flattered you noticed.’ As she sat down in the chair he pulled out for her, Coralie undid and refastened her bracelet, to avoid meeting his smile. When she’d first started coming here in the summer of ’37, Serge Martel had been a glamorous figure, oozing charm, taking care of customers’ every whim. She’d been poleaxed when she’d heard he’d later been arrested for violently assaulting one of his female singers and sent to prison for seven years. Eighteen months he’d served. Nobody knew how he’d got out so early – who had greased the prison doors – but there was something new and unnerving in his manner. Coralie tried to catch Una’s eye, but her friend was busy sizing up the clientele.

Martel, meanwhile, clicked his fingers at an elderly waiter shuffling towards them with a tray of champagne. ‘Quickly, quickly, man. We have thirsty ladies here.’

The waiter called back, ‘If I was younger and faster, Monsieur, I’d be in the army!’ but he hurried forward nonetheless.

Félix Peyron poured vintage Lanson into three glasses, and Coralie noticed how his hands shook. An institution on boulevard de Clichy, he’d aged as though the shock of defeat and invasion had knocked the life out of him. It looked as if he’d taken to rubbing talcum powder into his cuffs to whiten them, but tonight his collar looked distinctly yellow next to Martel’s tuxedo. How did Martel keep his tux so white, she wondered? It was easier to get to Heaven than to find washing soda these days, and laundries gave priority to German linen. Paris had not been bombed, like Warsaw or Rotterdam, but everything was running low: food, fuel . . . hope. For ordinary citizens, anyway. Counting the field-grey uniforms in the club, the caps with their silver eagles laid down on the best tables, Coralie formed her own conclusions about Serge Martel’s recent good fortune.

Having placed the bottle in its ice bucket, Félix stepped back and bowed. ‘You are welcome at the Rose Noire, Mesdames, as beauty is always welcome.’

‘Why, Félix, you wicked seducer.’ Una picked up her glass. ‘We’ll have to keep an eye on you, I can see that.’

Here we go
, Coralie thought. If it wore trousers, Una fluttered her eyelashes at it, though tonight her attention was really focused on the stage. Specifically on the Romany violinist, whose sweaty curls obscured half his face and whose shirt hung off one shoulder.

‘Aren’t they just? But I wish they’d stick to jazz standards. Changing the time signature of “La Marseillaise” doesn’t fool anyone.’ Una blew tumbleweed kisses towards the stage, and the violinist broke off long enough to return one. Gentle applause spread around the room. People were looking their way, women in particular. Coralie saw one pull a silk flower from her evening bag and pin it into her hair, as if she felt underdressed in comparison.

Félix, lighting their table candle, chuckled. ‘People see a love affair flowering and it makes them happy, though we are at war.’

‘No, sir, it’s our hats that are stealing the show.’ Una tapped the miniature Gainsborough confection pinned over her ear, ruffling its cascade of flowers and dyed feathers. She said to Coralie, ‘I promised you these bijou babies would be a sensation.’

‘
I
said they would be. I wish you’d stop pinching my ideas.’

‘Oops.’ Una took an indulgent gulp of champagne. ‘I forget I’m only the muse and not the milliner. By next week, they’ll be the rage. There’ll be a queue from your shop to the river.’

Coralie waited for Félix to leave. ‘Assuming we’re still here next week. Tilly?’ Their friend was staring into her glass as if she suspected prussic acid among the bubbles. ‘Drink it or put it down. People will think you’ve got something to be scared of.’

‘Have I not?’ came the whisper.

‘What choice does she have? We can’t risk taking her home because all our houses will be under surveillance. Her only chance is “over the line into the free zone and keep moving”. And before you talk of putting her on a train to the border, imagine her negotiating timetables, not to mention police checks.’

Una was right. Ottilia had to escape Paris and a car ride was her only hope. They now had to acquire by charm what they couldn’t get by queuing at a police station – her name on a road-travel permit. An
Ausweis
, to give it its official, German, title.

Una extracted a Chesterfield cigarette from an elegant case, her gaze never leaving the stage where the Vagabonds were polishing off the last bars of ‘La Marseillaise’. ‘Stand and clap when they’re done,’ she instructed Coralie.

‘Why don’t we wave the French flag while we’re at it? Then we could all get arrested and carry on the party in jail. I’ve never seen so many German officers in one place. I thought they hated jazz.’

‘
Your
German friend liked it.’

‘He was different.’
Off limits
, Coralie’s tone warned. ‘We shouldn’t be here. Any of the regulars might recognise us.’

‘Sure, but not Tilly. And, hey, we have a saying where I come from – “If you want to hide in the mustard, wear yellow.”’

‘We’re not in the mustard but we could be in the soup.’

Una rose to clap and, reluctantly, Coralie did too. The Vagabonds acknowledged the applause, then retreated into the shadows at the rear of the stage. Ottilia seemed to have slipped into a trance. Sitting down again, Una fitted her cigarette into a cream-coloured holder and accepted a light from a man at a neighbouring table. She blew a little smoke on him. ‘
Merci mille fois
. I guess we’ll catch up later.’

Once he’d retreated, she whispered to Coralie, ‘Don’t look round, but see those conquering heroes at the bar?’

‘Take my word for it, they exist. I sense they would like to buy us our next bottle of champagne. Shall we strike up a conversation?’

Coralie rolled a look their way and her stomach rose in revolt. The men wore black uniforms and lightning-strike SS insignia on their collars and they must have noticed Una smiling because their features suddenly sharpened in anticipation. Putting her hand against her mouth so that nobody could lip-read her words, Coralie said, ‘They could be Gestapo. I can’t be sure, but something feels wrong.’

‘Gestapo means “secret police”, right?’ Una lit a second cigarette. ‘Not
that
secret, lolling around in uniform, giving us the glad-eye. Hold your nerve and give this to Tilly.’

Coralie put the cigarette into Ottilia’s fingers, finding them ice cold. Una was right, of course, it was too late to alter their plan. A car was leaving here at dawn and all Ottilia had to do was sit in it. Provided with forged documents, a change of clothing and a couple of months’ worth of francs and occupation currency, she had every chance of getting to the Spanish border and freedom. All they needed was a German policeman of sufficient rank to apply his signature to the permit in Una’s handbag.

Plaintive notes announced the Vagabonds’ second set. The boys had changed into crimson silk shirts with Magyar sleeves and tight sashes. Their leader, Arkady Erdös, was tuning his violin, his dark gaze raking the audience. So he’d swung the forbidden ‘Marseillaise’?
What do I care?
he seemed to be saying.

Trouble was, they
would
care, those rule-obsessed Germans. Coralie whispered, ‘Does Arkady know he’s taking an extra passenger?’

‘Sure he does, and the others will find out when they snuggle up in the car together.’

Ottilia had put her cigarette straight between her lips and was drawing on it with such urgency that its end glowed amber. Forgetting to be cautious, Coralie scolded, ‘You look like a factory hand after a night-shift!’ Digging into her friend’s beaded evening purse, she searched for the twenty-two-carat cigarette holder she’d reluctantly allowed her to bring with her. She’d just located it when breath on her shoulder made her jump. The holder flipped out of the bag, carrying with it a small, fawn-coloured booklet.

Serge Martel smiled down. ‘Ladies, some military gentlemen have asked permission to join you, if—’

‘Tell them no.’ Coralie covered the booklet with her palm. ‘Girls only tonight.’

‘You don’t understand, Mademoiselle,’ Martel said silkily. ‘They “ask permission” but they are not expecting a refusal. What are you hiding under your hand?’

Martel lunged and, a moment later, was flourishing the booklet. It was an identity card. Nothing unusual in that. They all carried one, by law. But this was Ottilia’s
true
identity, stating her real name and country of origin. She was meant to have burned it! Simply possessing it could mean lethal trouble. And not just for her, for all three of them. Coralie said slowly, ‘Monsieur Martel, please give it back to me.’

A playful eyebrow answered her. Martel shared the same platinum-gold colouring as many of the officers at his tables, but not their spare professionalism. His stock-in-trade was his affable manner, his sexy familiarity with women. Liked a joke, did Martel. As he tilted his head, Coralie saw that his nose was crooked, as if someone had once swung a granite-forced punch at him. Perhaps that was why he kept the lights in his club so low. Because he was vain. Even back in the old days, when she’d liked him better, she’d sometimes caught him preening.

In the lightest voice she could muster, Coralie said, ‘You know that technically ID cards belong to the state? And they are rather private.’

‘But I wish a little peep, Madame. Maybe I am curious.’