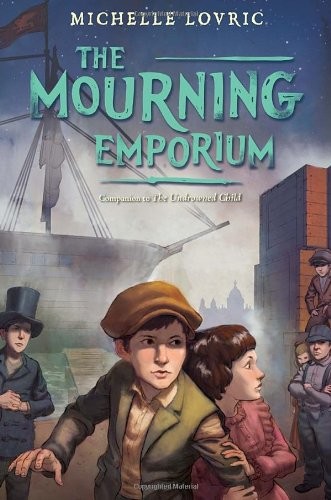 This is a work of fiction. All incidents and dialogue, and all characters with the exception of some well-known historical and public figures, are products of the author’s imagination and are not to be construed as real. Where real-life historical or public figures appear, the situations, incidents, and dialogues concerning those persons are fictional and are not intended to depict actual events or to change the fictional nature of the work.

In all other respects, any resemblance to persons living or dead is entirely coincidental.

All rights reserved. Published in the United States by Delacorte Press, an imprint of Random House Children’s Books, a division of Random House, Inc., New York.

Originally published in hardcover in Great Britain by Orion Children’s Books, a division of the Orion Publishing Group Ltd., an Hachette UK Company, London, in 2010.

Visit us on the Web! randomhouse.com/kids

Educators and librarians, for a variety of teaching tools, visit us at RHTeachersLibrarians.com

Sequel to: The undrowned child.

Summary: “It is 1900, and the evil traitor, Bajamonte Tiepolo, is back, his baddened magic spreading across the globe. Now Teo and Renzo must save both Venice and London, before it is too late”—Provided by publisher.

A little about the past

16. A shark smelling blood
17. English lessons and earrings
18. Inside the pillow box

26. The Bad Ship Bombazine
27. Mutiny at sea
28. A bag of the four winds
29. An ending and a beginning
30. Mesonychoteuthis hamiltoni
31. In castigo
32. London fog and stone
33. The Mansion Dolorous
34. A cunning secret entrance

43. “How do you account for that parrot on your shoulder?”

54. Feasts and Farewells
55. The Commodious Compendium

What is true, and what’s made up?

A little about the past …

Less than two years ago, eleven-year-old Teodora and her adoptive parents left their home in Naples to visit the exciting city of Venice. Soon after she arrived, Teo discovered The Key to the Secret City, an old book that revealed an ancient prophecy commanding Teo and a boy named Renzo to save Venice from Bajamonte Tiepolo, or Il Traditore, a murderous traitor back to seek revenge centuries after his death. Teo also learned that the reason she felt so at home in Venice was because she had in fact been born there. Her natural parents had been killed by Bajamonte, and Teo had escaped the same fate only because she had been saved by mermaids.

With the help of some new friends and a bit of magic, Teo and Renzo were able to stop Il Traditore before he destroyed the city. But when it came time to say the part of the spell that would kill him once and for all, Teo’s kind heart stopped her. As a result, Il Traditore was merely vanquished until the time when he would summon enough strength and baddened magic to return once more.…

A small girl stood on the ice that crusted the edge of the lagoon.

The storm was over. But the temperature was still falling. The girl shivered, wrapping her arms around her narrow body.

Particularly if you are one.

As far as the eye could see, way out on the islands of the lagoon, droplets of fog had frozen into a crystalline haze over the skeletal branches of the trees. It looked as if the leaves had been replaced by diamonds, glittering like angry teardrops. Ice strangled the shore; long white arabesques of it reached into the black water.

As she turned to trudge back home, Teo’s eye snagged on something glinting just below her, embedded in the frozen water. She bent down, lifting her pinafore out of the way for a better look.

For what she had glimpsed was a white eel, thick and long as a young tree trunk, with red gills sprouting like coral from its muscular neck. At the sound of her cry, the creature slowly lowered one translucent eyelid and winked at her.

“Vampire Eels!” Teo shuddered. “They’re back. And Venice all but drowned under the ice. It can only mean one thing.

“Renzo!” she whispered to herself. “I must tell Renzo! And the mermaids. And Professor Marìn and the other Incogniti …”

Teo winced at its mockery. Her nose pinkened, and she blinked rapidly. Then she stamped her foot.

The girl lifted her head and cried out over the icy tracts: “Me.”

When the news of the disaster was brought to Queen Victoria, she did not lift her dimming eyes from the soft-boiled egg in her golden egg-cup.

“The island city, Ma’am. In Italy, Ma’am—it has been destroyed, they say.”

“Is this Ve …?” The Queen stopped, her lip trembling.

“No, Ma’am, Venice has never been one of ours. Won’t you try a little egg? It is exceedingly lightly done.”

A sudden shadow darkened the window. A cormorant stood motionless on the sill, its ink-black wings spread out.

“Another one!” The nurse grimaced. “I do so hate those birds. Uncannily like bats, they are.” She turned back to her patient, “Now, Ma’am …”

But the Queen had fallen asleep again, the teaspoon still clutched in her tiny, wrinkled hand.

Queen Victoria of England was very, very old. She had reigned for sixty-three years, six months and five days. She had outlived her husband, three of her children, several of her grandchildren and one hundred and thirty-eight of her dogs.

She was the most famous woman in the world.

Everyone knew her drooping round face, her toadish eyes, her pursed-up mouth, her sharp parrot-beak of a nose, her silver hair pulled back under a widow’s cap, her fussy dresses of dull black silk. Everybody knew that, even though she owned plum-sized diamonds, Queen Victoria preferred to wear just two items of jewelry: her wedding ring and a bracelet made from the hair of her beloved—but deceased—husband, Albert. She had been in deepest mourning for him for almost forty years.

Albert’s death was only one of the many things that made Queen Victoria look as if she’d just swallowed a long draft of something exceedingly nasty. She was famous for never smiling.

These are just a few of the things that Queen Victoria particularly disliked: jokes, warm rooms, typewriting machines, bishops, weddings, magic, mysteries and, most of all, her own distant cousin Lord Harold Hoskins.

Queen Victoria also disliked the general public, which is why she spent a great deal of time tucked away at Osborne, her vast private estate on the Isle of Wight. If she absolutely had to mingle with her subjects, then Queen Victoria carried a parasol lined with chain mail, as several of those subjects had shown a tendency to aim pistols at her at close range. Undoubtedly, most of these would-be assassins had been stirred up by Harold Hoskins, who had the gall to pretend he’d more right to rule Britain than Queen Victoria herself.

So many times, Queen Victoria would have liked to say, “Off with his head!” But Harold Hoskins was, after all, family, and these were, after all, modern times. So the Pretender to the British throne was now lord of the sand and flies on the island of Hooroo in the South Pacific, where he’d been conveniently dispatched as governor of a penal colony five years before.

And what did Queen Victoria like? She liked suet pudding very much indeed. Queen Victoria was partial to dining off gold plates, even at breakfast. She liked ruling an empire as wide as the world, even if it seemed to her that many of her subjects were savages, heathens or even Australians. She heartily enjoyed ordering her family around and criticizing their personal habits—in spite of the fact that some of them had countries of their own to rule.

So there was a very big to-do when the news got out that, on December 25, 1900, Queen Victoria had not got out of bed, nor put on her black dress, nor read the dispatches from her ministers. For the first Christmas of her long reign, she had not criticized a single member of her household. Her memory wandered. She could not manage even a lightly boiled egg.

She wasn’t sick; she had simply worn out.

“Not much longer,” squawked the spy, flying away from the windowsill with ice in its black feathers. “Our time is coming. South, south!”

On a remote island off the Australian coast, where Her Majesty’s convicts toiled in the pitiless sun, Harold Hoskins stroked his neat sandy beard as he watched the dark cloud of birds cruising into the belfry of Hooroo’s bleak little stone church.

How convenient it was that his guest had taught him magical means of communicating with them.

“And what perfect timing,” he gloated, after the birds had delivered their news. “The Venetian operation a complete triumph! And now she can’t last much longer, the old bezzom!” Harold Hoskins, the Pretender to the British throne, could never bring himself to refer to his cousin Queen Victoria by name or title.

The spies had also brought happy news of their specially modified Vampyroteuthis infernalis, recently dispatched to London on a mission for his guest.

“Nasty little creatures,” thought Harold Hoskins fondly. They were, after all, his firstborn experiment in baddened magic. “I must tell him!”

He hurried carefully—for he could not risk a fall—down the passageway that led to a secret lagoon on the farthest and wildest edge of the island. He would be sure to find him there, gazing north as always. Anyway, it was time to check on their latest little project.

They had been testing certain spores on the local South Sea dolphins. Harold Hoskins didn’t see the harm in the fish himself, but his guest was most insistent that they should be treated “like the traitorous vermin they are.”

The blackened corpses of five dolphins lay on the beach. They were being drained of their marrowfat by a select band of yet another almost perfectly successful experiment, the Ghost-Convicts.

Who’d have thought it would be so simple to resuscitate the corpses of two hundred convicts who’d tried to escape the island back in 1835? The men had promptly driven their boat straight into Hooroo’s deadly reef. All perished. Now their ghosts, unattractively shark-nibbled, had been raised from the seabed and were turning into quite promising pirates. The Pretender’s faithful Lieutenant Rosebud had taught them all the villainous arts. The Ghost-Convicts were still slightly defective in function, however, with an inconvenient tendency to steal sheep.

Drury Lane’s Last Case by Ellery Queen
Fate's Intentions by Stevens, Dawn Nicole
Sputnik Sweetheart by Haruki Murakami
Sunset Tryst by Kristin Daniels
Finding Davey by Jonathan Gash
The Libya Connection by Don Pendleton
In the Belly of the Elephant by Susan Corbett
Zombie Ocean (Book 2): The Lost by Grist, Michael John
The Memory of Running by McLarty, Ron
A Door Into Ocean by Joan Slonczewski