Read The Music of the Night Online

The Music of the Night 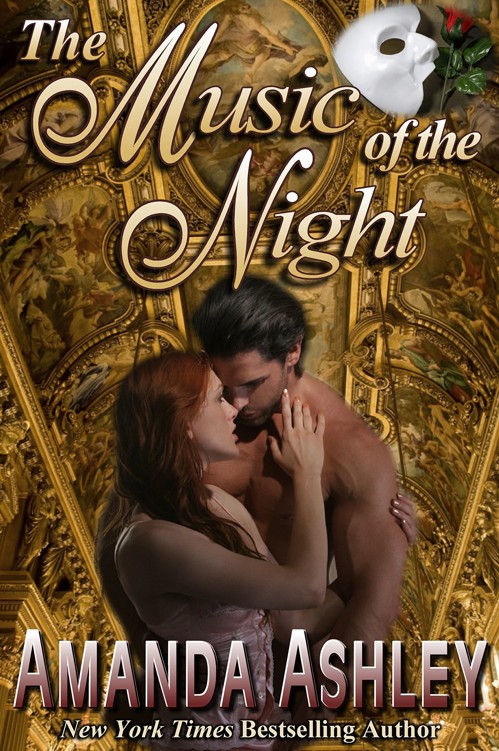 The Music of
the Night

Christie Matthews couldn’t believe
it, she was actually inside the Paris Opera House. It was everything she had
ever imagined, and more. Try as she might, she couldn’t find words to describe
it. Beautiful seemed woefully inadequate. Awesome came close, but still fell
short.

She owed her fascination with the
Paris Opera House solely to Andrew Lloyd Webber – or to be more exact – to her
fascination with the amazing production
The Phantom of the Opera
. She had
seen the movie, of course, but it didn’t hold a candle to the stage play. She
had seen the play once, and once had not been enough. The music had enthralled
her; the plight of the Phantom had touched her every emotion from joy to
despair, and she had eagerly joined the ranks of those feeling emotionally
drained when the Phantom’s last anguished cry faded away.

She had become obsessed with all
things Phantom. She had collected everything she could find with that
world-famous logo: music boxes and posters, ads in the paper, books and magazine
articles. If it related to the Phantom, she simply had to have it: dolls and
figurines; snow globes and playing cards; picture frames and jewellery;
Christmas ornaments and collector plates; every version of the music on tape or
CD that she could find.

Before coming to Paris, she had
researched the Opera House online and found a wealth of information. The Opera
House had been built by Charles Garnier (at that time a young, unknown
architect). Completed in 1876, the Palais Garnier was considered by many to be
one of the most beautiful buildings on earth. The theatre boasted 2,000 seats;
the building’s seventeen storeys covered three acres of land. Seven levels were
located underground, among them chorus rooms and ballrooms, cellars for old
props, closets and dressing rooms, as well as numerous gruesome objects from the
various operas that had been produced there. It was rumoured that these grisly
effects had sparked the idea behind Gaston Leroux’s
The Phantom of the Opera
.

And now, after scrimping and saving
for three years, she was there, in the Phantom’s domain. Alone. Shortly after
the final curtain, she had hidden in one of the bathrooms. If she got caught
wandering around, she would simply say she had lost her way.

Which would not be a lie, because she
really was lost. There were so many hallways, so many doors, she no longer knew
where she was.

Her footsteps echoed eerily in the
darkness as she climbed a set of winding stairs and then, to her relief, she
found herself inside the theatre.

She sank into a seat near the back of
the house and gazed around, wondering if this had been such a good idea after
all. It was dark and quiet and a little bit spooky sitting there all alone.

Resting her head on the back of the
seat, she closed her eyes and music filled her mind – the haunting lyrics of
‘The Music of the Night’; The Phantom’s tortured cry when he sees Christine and
Raoul pledging their love on the roof top; his heartbreaking plea when he begs
Christine to let him go wherever she went; his anguished cry as he takes her
down to his lair; his rage and anger and the faint glimmer of hope when he
demands she make her choice; the last haunting notes when he declares it is
over.

There was a never-ending discussion
on any number of web sites about whether Christine should have stayed with the
Phantom, and also surveys asking whether the listers themselves would have
stayed with Erik (the Phantom) or gone with Raoul. Poor Raoul, he seemed to be
disliked by one and all.

There had never been any doubt in
Christie’s mind that she would have stayed with the Phantom. She knew what it
was like to be left for another, knew the pain and the heartache of unrequited
love, knew there was more to life than sweet words and a pretty face.

Sitting there, with her eyes closed,
she seemed to hear Christine’s voice, but of course, it was only her
imagination.

Still, it seemed so real. Opening her
eyes, Christie stared at the stage, blinked and looked again. Was there a figure
standing there? A figure wearing a hooded cloak and a red scarf? Christie rubbed
her eyes. Not one figure, but two. A dark shape wearing a black hat with a long,
curling black feather stood beside the cross on the cemetery wall. A long black
cloak covered him from neck to heels. Was that a staff in his hand? Canting her
head to one side, Christie heard him sing ever so softly and sweetly to his
wandering child.

Christie sat up straighter and leaned
forwards. It wasn’t possible. She had to be dreaming. She rubbed her eyes again.
The figure of Christine seemed transparent, ghost like, but the Phantom . . .
She was certain he was real.

Fear sat like a lump of ice in her
belly, and then she realized that what she was seeing was probably just some
star-struck member of the cleaning crew, or a night watchman wearing one of the
Phantom’s costumes, or . . . Of course, it was an understudy who had stayed late
to rehearse. It was the logical explanation, except it didn’t explain the
ghostly Christine.

Suddenly, echoing through the empty
building came the Phantom’s cry of rage as Christine turned her back on him and
left with Raoul. Fireballs spit from the Phantom’s staff to light the stage and
the image of Christine disappeared. But the figure of the Phantom remained
standing near the cross, his shoulders slumped in defeat, his head bowed.

It had always been one of her
favourite scenes, one that had never failed to move her to tears. This
performance by some unknown actor was no different. With a sniff, she wiped the
dampness from her cheeks . . .

. . . and found herself pinned by the
gaze of the man on the stage. Even through the darkness, she could feel those
black eyes burning into her own.

Her mind screamed at her to leave, to
run from the theatre as quickly as possible, but try as she might, she couldn’t
move, couldn’t tear her gaze from his.

It took her a moment to realize he
had left the stage and was walking rapidly towards her. He moved with effortless
grace, the long black cape billowing behind him. His feet made no sound; indeed,
he seemed to be floating towards her.

And then, abruptly, he was leaning
over her. The half-mask gleamed a ghostly white in the darkness.

“Christine?” His voice, filled with
hope, tugged at her heart.

She shook her head, her eyes fixed on
the mask that covered the right side of his face. No, it couldn’t be. He wasn’t
real. He didn’t exist.

He took a step closer, and then he
frowned. “Forgive me, you are not she.”

Christie tried to speak, but fear
trapped the words in her throat.

“You are very like her,” he remarked,
a note of wonder in his voice.

His voice was mesmerizing: a deep,
rich baritone, haunted, tinged with pain and sorrow and a soul-deep loneliness.

Caught in his gaze, she could only
stare up at him, her heart pounding a staccato beat as he reached towards her,
his knuckles sliding lightly over her cheek.

A slight nod, filled with arrogance.
One dark brow arched in wry amusement. “Some people know me as the Phantom of
the Opera.”

Christie shook her head. No, it was
impossible. She was dreaming. She had to be dreaming. Soon, her alarm clock
would go off and she would wake up in her room at the hotel. And she would
laugh.

She looked up into his dark, haunted
eyes and wondered if he had ever laughed. Wondered if she, herself, would ever
laugh again.

“Christie,” she said, and fainted
dead away.

He caught her before she slid out of
her chair.

She was quite lovely, he thought,
light as a feather in his arms. Her hair was a rich auburn, soft beneath his
hand. What was she doing here in the Opera House long after everyone else had
gone?

A soft laugh escaped his lips as he
carried her down the aisle, turned left and disappeared through a secret door.

Down, down, down, he went, until he
reached the boat by the underground lake.

He placed her gently in the stern,
then poled across to the other side.

“Christie.” He spoke the name softly
– reverently – certain it was short for Christine. He wondered if, this time, he
might be blessed with a happy ending.

Christie woke to the sound of music.
Sitting up, she glanced at her surroundings. She didn’t have to wonder where she
was. She knew. She had seen it all before: the organ, the masked man sitting
behind it with his head bowed over the keyboard, the boat rocking gently in the
water beyond, the flickering candles.

She was in the Phantom’s lair.

He continued to play, seemingly
unaware of her presence. The music was darkly sensual, invoking images of
sweat-covered bodies writhing on silken sheets. The notes poured over her,
making her skin tingle.

She studied his profile, though she
could see little but the ghostly mask. Was he as hideous as he was portrayed on
stage and in the movies? If she were Christine, she would rise from her bed and
tiptoe towards him. She would wait for the moment when he was so caught up in
the music he was composing that he was oblivious to everything else, and then
she would snatch the mask from his face.

But she wasn’t Christine and none of
this was real. She had to be dreaming. It was the only answer.

The music ended abruptly and she
found herself staring into his eyes.

He inclined his head in her
direction. “Welcome to my abode, my lady.” His voice was like warm whisky,
smooth and intoxicating. Would he sing for her if she asked?

Feeling suddenly uncomfortable at
being in his bed, she threw the cloak aside and gained her feet. “I’m sorry,”
she stammered. “I must have fainted.”

“Would you care for breakfast?”

In a lithe motion, he rose from the
bench and glided towards her. “So soon?”

She nodded, struck by the beauty of
the unmasked portion of his face. And his eyes, they were dark, so dark.

He gestured towards a small table.
“You may as well eat.” He lifted a white cloth from a large silver tray
revealing plates of sliced ham, fried potatoes and soft boiled eggs. The scent
of coffee wafted from a silver carafe. A crystal pitcher held orange juice; a
white basket held a variety of muffins and croissants.

Her stomach growled loudly. She
hadn’t eaten since early last night, after all. “Well, I guess it would be a
shame to let it go to waste.”