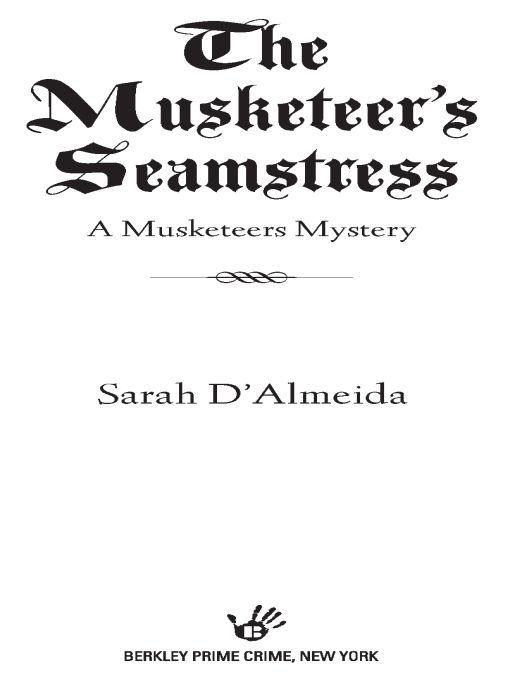 Table of Contents
Title Page
Copyright Page
The Impossibility of Murder; Where Aramis Questions His Sanity; A Naked Fugitive
A Hierarchy of Branches; Running from Fate; Where Fear Gives Not Only Wings, ...
A Fugitive in Need; Where Four Show They Think Like One; A Fine Predicament
Where Strength Is Tested; The Sad Lot of the Musketeer’s Servant; The ...
The Inconvenience of a Murdered Noblewoman; Athos’s Doubts; Aramis’s Anger
The Wisdom of the Tavern; A Musketeer’s Regrets; An Unpleasant Decision
Where Three Musketeers Can Slow Six Guards; The Fine Points of Gascon Honor
A Council of War; The Various Kinds of Seamstresses; The Memory of Husbands
Secret Passages and Palace Maids; A Count’s Connections and a Gascon’s Loyalty
The Prodigal Musketeer; French Manners and Spanish Mourning; Regrets of Exile
Kitchen Wenches and Maids; Food for Thought; A Musketeer’s Loyalty
A Musketeer’s Misgivings; Where Memory Intrudes Upon Life; D’Artagnan’s Innocence
Cooks and Maids and the Secrets of the Fire; The Distinct Advantages of an ...
The Prodigal’s Awakening; Brushes and Mirrors; Monacal Disciplines
Where Old Friends Meet; The Count and the Duke; A Country Gentleman’s Estate
Cooks and Maids; Holes and Tunnels; Food and Love
Where Families Are Proven to Share More than Coats of Arms; A Musketeer’s Capitulation
Where Dead Wives Mean Nothing Near Horses and Vineyards; The Happiness of a ...
Of Sons and Heirs; Where Love Is Not Guilt; An Inconclusive Leave Taking
The Best Intentions of a Novice; Dark Eyes and Dark Thoughts; A Message from ...
Cardinals and Passageways; The Slowness of the Quick; Porthos’s Wisdom
A Letter from the Cardinal; Choices and Conflicts; The Inadvisability of ...
Floors and Ceilings; A Secret Panel and a Masked Stranger
A Musketeer’s Scruples; Between Girdle and Garter; A Decision Made
A Masked Ghost; Dead Woman’s Jewelry; The Immovable Porthos
The Prodigal Musketeer, Revisited; The Sins of Musketeers; Nowhere to Hide
Where Locked Doors Aren’t Always Impassible; Secret Passages and the Jealousy ...
Footprints and Somersaults; Ghosts and Words; Monsieur Porthos’s Very Deep Doubts
Messengers and Queries; The Elusiveness of Musketeers; Where Aramis Gets Tired ...
The Drawback of Good Jewelry Stores; The Horrible Suspicion; Attacked in the Night
Blood and Wine; Guards and Thieves; The Prey Turns Hunter
A Gascon’s Lodging; The Secrecy of Salves; Where Musketeers Must Walk Even ...
Where Porthos Discovers the Virtues of Recessed Doorways; The Guards of the ...
Evening the Odds; Two Gascons and a Musketeer
What To Do with a Fugitive; Where the Cardinal’s Guilt Is Agreed Upon, but ...
D’Artagnan’s Theory; Athos’s Explanation; Porthos’s Ghosts
Porthos’s Clarity; The Greatest Need; Porthos’s Duchess
Porthos’s Theory; Families and Friends; The Accountant’s Abode
The Matter of the Knife; A Dead End
Fire and Color; The Very Deep Reasoning of Porthos; Where Aramis Becomes ...
Dancing on a Rope; Not Everything in a Dress Is a Lady; Ghosts
Mirrors and Vows; Holy Grudges; The Guilty Party Begs Clemency
Aramis’s Guilt; The Confession; The Plan
Porthos’s Doubts; Aramis’s Appeasement
Sins and Atonements; Where Aramis Refuses to Bend
Cardinal Doubts; Cardinal Sins; The Importance of Church Latin
Teaser chapter
The Many Inconveniences of a Sin of Vanity; Flying and Fighting; Murder Done
Doubt of a Musketeer
“You were surprised at finding her dead, then?” Athos asked.
“Of course he was, Athos, what a question,” Porthos said. “Who would expect his lover to be killed?”
Athos didn’t answer Porthos, but looked steadily at Aramis, whose gaze showed an understanding of Athos’s question.
“I was,” he said. “Shocked. I’d only stepped to this little closet beside her room, in which she keeps—kept a chaise perceè for . . . such needs as arose. Only a few minutes. And I came out to find Violette dead. I was quite shocked. Though . . .”
“Though?” Athos prompted.
Aramis sighed. “Though in the next few seconds, as I contemplated the locked door, the impossibility of a passage into the room, the inaccessibility of the balcony, I wondered if I . . .” Again he floundered, and he gestured with his hands, as if expressing the inability of language to translate his meaning. Then he rubbed the tips of his fingers on his forehead, as if massaging fugitive memory. “I wondered if I could have committed the monstrous deed and forgotten all about it . . .”
The Musketeers Mysteries by Sarah D’Almeida
DEATH OF A MUSKETEER THE MUSKETEER’S SEAMSTRESS

The Impossibility of Murder; Where Aramis Questions His Sanity; A Naked Fugitive
THE
Chevalier Rene D’Herblay—better known for some time now as the musketeer Aramis—was sure that no one could have murdered his mistress.
A tall, slim man whose long blond hair and normally elaborate attire made people underestimate the very solid muscles now on display, Aramis stood naked in the doorway of her room. His numb hands gripped the wooden frame for support, because his knees had gone unaccountably lax. He looked out, unbelieving, at the huge bed that took up a quarter of the bedroom.
The bed was high and heavy and massive—a solid construction of Spanish oak that had probably come in Violette’s dowry when she’d married a French duke. Upon the oak, soft draperies had been heaped, to make the bed suitable for someone of Violette’s soft skin and softer habits— there was lace and velvet and a profusion of pillows of all shapes and sizes.
Aramis knew that bed better than he knew his own. He had been Violette’s lover for two years and he’d spent considerably more time in her bed than his. At least time awake.
He grasped the doorway hard, for support, and blinked dumbly at the bed. Because on the bed, Violette lay. Violette who, only minutes ago had been lively, full of fire, eager for his embraces and inventive with her own.
Now she lay . . . He felt sweat start at his hairline, a cold sweat of fear and disbelief. And blinking didn’t seem to change the scene his eyes showed him.
Because Violette could not be dead. And yet she lay on the bed, motionless, her normally pink body gone the color of cheap candle tallow, her mouth open and her eyes staring fixedly at the canopy of pink satin over her.
Between her perfect, rounded breasts that his hands and lips knew as well as his eyes did, an intrusion—an ivory handle—protruded. And around her breasts, there was blood, dripping into the lace and pillows, the satin and frills.
Aramis swallowed hard, fighting back nausea and a primal scream of grief that wanted to tear through his lips.
His mind, still in control, feverishly went over and over the reasons why this was impossible.
First, he’d left her alive when he’d gone into the small room next to her room where—out of modesty or high breeding—she kept the
chaise percée
used for calls of nature. Second, he’d taken no more than a moment there. He was sure of it. And he’d heard no doors close or open anywhere. Third, the door to the room was locked—had been locked when they first lay down together. He’d turned the large key himself, heard it click home. Fourth, they were three floors up in the royal palace, with sentinels and guards all around and thick walls encircling the whole structure. And there was only one small window in the room—too small to admit anyone—and a door to a narrow balcony well away from other walls and trees. The balcony was large enough, only, for two people to stand close together. The bed was too low to the floor to conceal anyone beneath it.
No one could have come into the room. And Violette was not the sort to commit suicide. Or to commit it with a knife to the heart. No woman was. This Aramis—who knew many women—knew. They were more inclined to the poison that would pluck them from life while they slept. Not that he’d ever had any of his mistresses die this way. But he’d heard about it. He’d . . . read.

Strum Your Heart Out by Crystal Kaswell
The Accused and the Damned: Book Three, the Eddie McCloskey Series (The Unearthed 3) by Evan Ronan
TIME AND TIME AGAIN The sequel to 3037 by Holloway, Peggy
To Room Nineteen by Doris Lessing
Mechanical Hearts (Skeleton Key) by Nicole Blanchard, Skeleton Key
El mensajero by Lois Lowry
She's My Kind of Girl by Jennifer Dawson
Free Draw (The Jake Samson & Rosie Vicente Detective Series Book 2) by Shelley Singer
The Cinderella List by Judy Baer
Even on Days when it Rains by Julia O'Donnell