The Mystery in Dracula's Castle 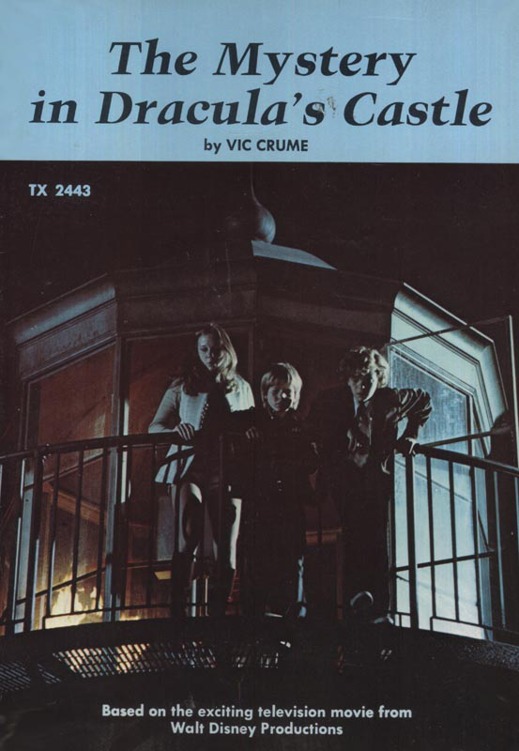 The Mystery in Dracula's Castle
by Vic Crume

Illustrated with Photos
Based on the Walt Disney Productions' television movie
The Mystery in Dracula's Castle
written by Sue Milburn.

DRACULA! On the shadowy screen, he glared up from his coffin, pale and horrible in the light of the grave robber's lantern!

Every pair of eyes in the dark movie house stared frozenly as Dracula's terrible bony hand reached up along the coffin edge. And when the bony fingers of the foul fiend of Transylvania curved into claws, shrieks, gasps, and moans swept the audience.

Twelve-year-old Alfie Booth, aspiring movie producer, and Morgan Harris, his best friend, weren't missing one bloodcurdling moment. Their eyes scarcely blinked. But suddenly Morgan sensed a diving motion at his side. He glanced quickly toward Alfie's young brother, Leonard. Sure enough, Leonard had scrunched down in the seat, his fingers clamped across his eyes. Then the fingers, like Venetian blinds, widened into slits and Morgan knew that Leonard was peeking fearfully between them.

He nudged Alfie and nodded his head in Leonard's direction. Both boys chuckled, then looked quickly back at the screen where Dracula was now swirling off in a mist, his black cloak spread like batwings.

To young Leonard Booth, who had been dragged unwillingly to this Sunday matinee by his older brother, it seemed forever before a wild burst of music ended the movie and Dracula faded from view. The lights came up, and the boys straggled out into the lobby. As soon as Leonard reached the door, he hurried ahead of Alfie and Morgan, out into the wonderful light of day — the wonderful California sunshine that would have tortured Count Dracula but that ten-year-old Leonard had never loved so much as now.

Behind him, Alfie fell into step beside Morgan.

"That movie wasn't even scary," he said thoughtfully, speaking as an experienced movie producer. "I bet my film will be a lot better."

"I bet it will," Morgan agreed. "That Dracula wasn't nearly mean enough. And there should have been more blood."

Alfie frowned. "Yeah. He should have had bigger fangs. In
my
Dracula film there's going to be plenty of blood — just like in the Super-8 Frankenstein movie we made last winter. Remember?"

Morgan nodded. He angled his arms up and forward, then lurched along the sidewalk like Frankenstein. "That film was good and gory, Alfie," he said. "You're really a great director — and I was a pretty good monster too."

Leonard swung around. "I didn't like it," he said firmly.

"It was awful. I'm never going to be in one of your dumb movies ever again!" Leonard burst out.

"Nobody's asking you," Alfie returned. "Any time I ask
you
to be in one of my movies again…"

"Listen!" Leonard's hand shot up. "Listen!" He started running like a bloodhound following a trail. Alfie could call himself a producer, but Leonard was a dedicated detective, and in the distance a burglar alarm was blaring.

"Who are you going to get to play Dracula in your new movie?" Morgan asked, not bothering to comment on the sounding alarm.

Alfie tugged at his ear. He sighed. "I don't know, Morg. You'd be great for the part — even better than you were in Frankenstein."

Morgan nodded in agreement. "Yeah, that's right. I'd be great. But you're going away to the beach for the summer. So that ends that. You can't have it both ways, Alfie."

"Can't have it both ways!" Alfie exclaimed. "I suppose if I was staying here, you wouldn't be going to camp? Who's leaving who, anyhow?"

Morgan sighed, "Well — what can you expect when you've got parents? Sure I'll be going to camp. But nothing would be happening around this town anyway with you gone."

"Hey!" Alfie exclaimed suddenly. "Flack's jewelry store! That's the big one with all the real expensive stuff. It's their burglar alarm ringing! Come on, Morg. This could be interesting."

The boys broke into a fast trot and caught up with Leonard, who was already standing in front of the jewelry store.

"Here come the police cars." Morgan said. "Let's get up on that balcony over there. We'll get a great view."

They scrambled up the stairs of the house next to the jewelry store, just as two police cars, sirens sounding, came whizzing up to the curb. Uniformed policemen and one plainclothes detective leaped out of the cars.

"What are you kids doing up there?" the detective called out. "Get down!" As the boys started down the stairs, he strode off to the shop door. "Somebody get in there and shut off that noise," he said grumpily. "Now get back, everybody. Move along."

He elbowed Leonard out of the way. "Dust this door for prints," he ordered. Striding past Alfie and Morgan, he went back to the patrol car and picked up the radio mike. "I've got a 459 here," he said. "Code 4." He put down the mike. "Any prints?" he called over to the officers.

"No prints, sir. But I think I've got something else — fibers," one of the men answered.

Leonard, standing off at one side, watched carefulIy. He loved detectives as much as he hated monsters. The detective flipped out a magnifying glass. He examined the rough edges of the broken glass around the lock. Then taking a pair of tweezers, he picked off some fibers and placed them in a plastic envelope.

From the other side of the door, the policeman who had gone into the shop to turn off the alarm called out: "The safe's been blown, sir."

Just then a long dark car swept up behind the parked police cars. A dignified white-haired man stepped out onto the sidewalk. "I'm Flack," he said. "This is my store. What's happened?"

The detective turned. "Mr. Flack? Well, your safe has been blown, sir."

Mr. Flack's eyes widened. He made no reply but pushed past the boys and the police and hurried into his shop. In seconds he was back, holding an empty velvet-lined tray. "It's gone! Gone!" he cried.

"What are the Dawm-yay jewels?" the detective asked.

Mr. Flack groaned. "Only one of the most beautiful choker necklaces in the world!" he exclaimed. "Pigeon's-blood rubies set in gold!"

"Let's go into the shop, Mr. Flack," the detective said, taking the jeweler by the arm. "Don't worry — we'll find out who did it."

The door closed behind them and Leonard moved over to the window to peer after them.

"Yeah. Come on," Morgan added. "They're never going to find the person who did it."

Leonard didn't budge. He watched the detective inside examining the big safe through his magnifying glass. "If I were a detective, I'd find out who did it," he said.

Alfie chuckled. "You a detective!"

Leonard turned around. "Yeah — me. Why not? I've got a magnifying glass."

Alfie held his sides laughing. "You've got to have more than that to be a detective."

"And that lets you out," Alfie said. "You'd better stick to
pretending
."

But the next day Alfie realized that his young brother was taking the detective business seriously. Instead of helping to pack the car for the trip to the beach house, Leonard was examining everything in sight through a big, round magnifying glass. Alfie looked on silently as Leonard bent over the chrome doorhandle of their mother's car.

"Instead of searching for clues for some unknown crime, Leonard, why don't you do something useful — like searching for a place to put these?" Alfie held out a hammer and a two-foot long stake.

Just then, Marsha Booth, the boys' pretty mother, came out of the house carrying a battered old typewriter. "Alfie!" she exclaimed. "Are those things absolutely necessary? We're already loaded down."

"Yep, they're necessary," Alfie replied. "They're props for my new movie. I've decided to film
Dracula
this summer."

His mother frowned. "Does it have to be so realistic?" she asked. "Oh, well — okay. Throw them in the back seat." She walked around to the open car trunk and reached across the two bicycles that were tied above the rear bumper. "There!
Barely
enough room for my typewriter — and goodness knows I've got to get my book finished this summer. That's one thing that's absolutely necessary."

Leonard scrambled into the driver's seat and slid over to the middle. His mother followed. Alfie hopped in on the other side, slammed the door, then shouted, "Hey! Wait! Here comes Morgan. I bet he's here to say good-bye."

"Well then, say good-bye," Leonard said shortly. He looked away from Morgan.

Morgan walked up to Alfie's side of the car. "Hi, Mrs. Booth. Hi, Alfie. I guess I'll see you in September." Morgan looked sadly at Alfie.

"Sure you will," Alfie answered. "In September. Say, Morgan, have a great summer at camp."

"Yes, Morgan. Have a fine summer." Mrs. Booth smiled. "You caught us just in time. We're just about to go."

Morgan sighed and stepped back from the car. Leonard lifted his magnifying glass and peered scornfully at him.

Mrs. Booth pulled away from the curb. Alfie and Morgan kept on waving to each other.

I Have the Right to Destroy Myself by Young-ha Kim
The Billionaire’s Desires Vol.12-13 by Emma M. Green
It's My Party by Peter Robinson
Riss Series 4: The Riss Accession by C. R. Daems
Endre (Elsker Saga Book 2) by S.T. Bende
Ladykiller by Light, Lawrence, Anthony, Meredith
In Love with a Thug by Reginald L. Hall
A Stolen Childhood by Casey Watson
Teasing Annie: The Temptation Saga: Book Two by Hardt, Helen
Ragnar the Just (Ragnar the Dane #3) by Byrne, Lily