Read The Mystery of the Song Dynasty Painting Online

The Mystery of the Song Dynasty Painting 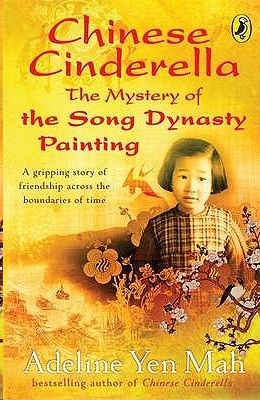 Chinese Cinderella The Mystery of the Song Dynasty Painting

Adeline Yen Mah’s family considered her to be bad luck because her mother died giving birth to her. They discriminated against her and made her feel unwanted all her life. After the death of her stepmother in 1990, she felt compelled to give up her career as a physician to write her life story. Her adult memoir,
Falling Leaves
, was published in 1997 and became an international bestseller. Then, in 1998, Adeline wrote an autobiography for children in response to the many letters she received from young people who also felt unloved and unwanted. The result,
Chinese Cinderella
, is the true story of Adeline’s childhood, and has become a much-loved book for children all over the world.

As a child, Adeline loved reading and writing and whenever things were bad she would write stories in order to escape from the tyranny of her stepmother and cruelty of her siblings. Her first novel for children,
Chinese Cinderella and the Secret Dragon Society
, is based on one of the exciting Second World War stories that she wrote to amuse herself and her schoolfriends. The sequel,
Chinese Cinderella – The Mystery of the Song Dynasty Painting
, is inspired by the ancient Chinese painting
Along the River at Qing Ming
.

Adeline is a full-time writer and lives in California, USA, with her husband. She spends the summer months in London.

THIS BOOK IS RENAMED "ALONG THE RIVER" IN THE US EDITION.

A THOUSAND PIECES OF GOLD

(reproduced by permission of The Palace Museum, Beijing)

This book is a fantasy based on the ancient Chinese painting titled
Along the River at Qing Ming
. Nicknamed China’s
Mona Lisa
by Chinese-art lovers because of its fame, it was painted in the twelfth century by a court artist named Zhang Ze Duan. During the subsequent dynasties, it has been in the private collection of many Chinese emperors. More than twenty copies were made by various artists.

Pu Yi, the last Emperor of the Qing Dynasty, abdicated his throne in 1912. Nevertheless, he lived in the Forbidden Palace until 1924. When he finally left under duress, he took
Along the River at Qing Ming
with him. In 1932, he went to Manchuria and was installed by the Japanese as the puppet Emperor of Manchukuo (Manchuria) in 1934.

In 1945, the Japanese lost the Second World War and Pu Yi fled from Manchuria. He was captured by the Russians, who put him in jail and placed his painting in a vault at the Bank of China. In 1950, the Russians returned Pu Yi to Communist China for trial as a war criminal. Meanwhile, his painting was transferred to the Palace Museum in Beijing where it remains to this day. Mao Ze-dong pardoned Pu Yi in 1959. He worked as a gardener in the Beijing Botanical Gardens after his release from prison, and died eight years later during the Cultural Revolution.

This is the second in a series of books based on the fictional character CC (initials for Chinese Cinderella). The first book was titled
Chinese Cinderella and the Secret Dragon Society
and was set in 1940s Shanghai during the Japanese occupation.

In that first book, twelve-year-old CC ran away from home and joined the Secret Dragon Society, headed by Grandma Wu and her son Master Wu. Under their direction, CC and three Eurasian boys named David, Marat and Sam rescued four American pilots from prison and sailed with them on the Yangzi River to Chungking.

In this book, CC leaves the boat to buy food in the river town of Feng Jie. Pursued by a strange woman dressed in black, she escapes by climbing up a drainpipe but then falls from the roof. On awakening from a coma, CC is treated for her neurological symptoms. While under hypnosis, she recalls the life she led eight hundred years ago as a young girl in Bian Liang (now called Kaifeng), the then capital of China during the Northern Song Dynasty.

Two other paintings are mentioned in this book: Auspicious Dragon Rock and Listening to Qin Music, both also housed at the Palace Museum in Beijing. They are attributed to Emperor Huizong, whose signature, written in cipher (First Man of All under Heaven –
Tian Xia Yi Ren

), and seal mark can be seen to the left of the two paintings.

My research was carried out at the library of the University of California in Irvine. Although CC, Zhang Mei Lan and Ah Zhao are all fictional characters, the paintings are real. So are the supporting cast of individuals – such as Tong Guan, the eunuch general, and Cai Jing, the Prime Minister – as well as the book’s historical background.

CC first noticed the woman in black when she stopped at the spice booth to buy salt and soya sauce. The market was packed with people. They crowded the narrow aisles between the stalls, jostling each other and bargaining for the best value. Children raced around, playing hide-and-seek along the cramped passageways, while stallholders called out to passers-by, waving their merchandise in the air and shouting out prices.

In all the noise and bustle, CC couldn’t be sure how long the woman had been watching her. As soon as their boat had docked in the river town of Feng Jie

(Grandma Wu) had sent her and David on shore to pick up essential supplies. They had been told that Feng Jie was ‘safe’, but it was impossible to be sure in these dangerous times.