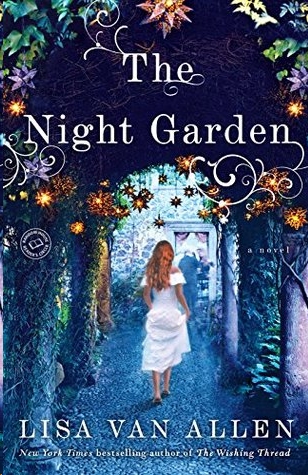 The Night Garden
is a work of fiction. Names, characters, places, and incidents are the products of the author’s imagination or are used fictitiously. Any resemblance to actual events, locales, persons, living or dead, is entirely coincidental.

“And down he hastened into the Eden of poisonous flowers.”

—from “Rappaccini’s Daughter” by Nathaniel Hawthorne

Up the Garden Path

The Forest for the Trees

A Thorn in Her Side

Up the Garden Path

Gloria Wallace Zeiger had been peering through her binoculars for such a long time that when she turned to her husband to speak to him, two red indentations had appeared on the bridge of her nose.

Her husband of forty years, Richard Zeiger, did not look away from his television show though it had gone to a commercial. “Can you see sprinklers?”

“No,” Gloria said. “But I know they’re doing it.” She made a noise that was halfway between a sigh and a huff, and then dropped her binoculars on the nylon strap around her neck. Her hair scrolled into two perfect blond commas under her earlobes, and her makeup was unsmudged. “They’re probably doing it at night so that nobody sees them. But they
are
doing it. They have to be. Nobody can have a garden like that in the middle of the worst drought in twenty years unless they’re watering.”

Outside the window, the gentle hills of the northwestern Catskills looked dusty and tired. Rows of corn that should have been ebullient emerald were instead a resigned color between yellow and green. Cats had begun taking dust baths like birds, and birds began lazing on porch stairs like cats, and the black
bears that frequently wandered through the hamlet of Green Valley lumbered about shaking their massive heads disapprovingly from side to side. In nearby White Lake—where hundreds of thousands of hippies had once flocked for the Woodstock Music and Art Fair—the usually abundant lake waters had shriveled away from the shores. The paint on the old mom-and-pop bait shops and motels blistered and pruned in the sun. The crossing guard near Rick’s Hardware—who first showed up in White Lake for what everyone called “the Concert” and who had manned her post year-round by sheer force of habit ever since—swore that she’d had to hold up her sign and stop traffic because a tumbleweed had rolled across the intersection on a scorching, windless Wednesday at high noon.

And yet, below the Zeigers’ picture window in Green Valley, the sunbaked terrain was interrupted, preposterously, by the wild, lush, profligate, effusive green of the Pennyworts’ private gardens, blooming ferociously despite the water ration laws.

Although the gardens were not world famous, they were locally famous (
infamous,
Gloria told her friends back home in the city) because a whole acre of the Pennywort farm had been devoted to a dozen or so small, individual garden “rooms” that were joined together by tangled pathways of tall evergreen hedges. The whole thing might have reminded Gloria of the garden maze she’d seen on her honeymoon in France, but that diversion had been mild-mannered, neat, and austere, while the maze on the Pennywort farm looked like it sprang directly from the earth: toothy, rambunctious, and snarled as climbing vines.

Every year, the Pennyworts expanded the maze to be one or two rooms bigger. Flowers grew out of season, and plants that should not have bloomed in western Catskills soil were hardy and flamboyant. Dog violets that were the size of pennies in most yards grew to the size of small dogs. Trumpet vines with their horns of bright orange and yellow were nearly the size of
actual trumpets. Gloria had taken a stroll through the gardens only twice: The first time had been more than three years ago, when she’d visited the garden maze as an excuse to meet her new neighbors. She remembered everything, each individual garden that made her eyes go wide and her breath catch in her lungs. She remembered the soft-as-cloud lamb’s ear and prickly cones of teasel in the Petting Garden. She remembered the large orange koi fish from the Rock Garden that wagged their golden tails in happy greeting, and the children who reached into the pond to tickle their bellies as if the fish were dogs. She remembered bright walls of bougainvillea standing neighborly beside creeping, spidery Venus flytraps—how such exotic species grew in the Catskills seemed halfway between a miracle and an abomination. And she remembered the bright sentinel sunflowers that lined a long corridor of tall green hedges; if she didn’t know better, she might have sworn they followed her with their big drooping heads when she passed by.

But mostly what she remembered was the thing she wanted most to forget: the Remembering Garden. The maze, some people said, could bring on a kind of mental or emotional clarity—if a person was open to it. The things a woman didn’t understand about herself might become clearer; the difficult choice a man had to make would not become less difficult—but he might feel more confident about making it after a visit to the garden.

Gloria had dismissed the rumors and ducked into the Remembering Garden. The little green room of tall hedges was classical and poetic: elegant ivory columns, a pretty marble fountain of a woman pouring water, and words chiseled simply in a stone architrave:
SIT A WHILE AND REMEMBER WHAT’S FORGOT
. The plump honeybees were buzzing, the fountain was singing, and the garden was gently landscaped with champagne-colored roses, cascading green ivy, and hummocks of forget-me-nots. Gloria thought of nothing special. People passed by. Thoughts
of an old friend that she had not spoken to in a long time popped into her head; she could only assume this was the power of suggestion. Later, after she’d spent a sleepless night wrestling with fitful dreams that were full of apologies she had no intention of making to her long-lost friend, she blamed the Pennyworts for the annoying crookedness of the bumper of her car, which had happened as a direct result of both the Remembering Garden and the guardrail that had kept her from going into a rocky Catskill ravine when she’d fallen asleep at the wheel. This was not magic, mind you; it was simply a thing that happened because it’s never a good idea to sit and ponder the past too long.

Although most people in the vicinity of Green Valley did not like to say much about the Pennyworts and got an odd look on their faces whenever Gloria tried to tease out a little harmless gossip, no one denied that the family was a bit different, if not strange. At the very center of the Pennyworts’ garden maze was a squared-off area, no more than the size of a one-car garage, surrounded on all sides by heavy stone walls and accessible only by a locked, opaque wooden gate. Dented metal signs were posted every six feet on the wall at varying heights and in multiple languages:
Mantener fuera. Hålla ut. Keep out.

All of the little plots in the Pennyworts’ garden maze looked healthier than they should under the tinder-dry circumstances, but it was this walled-in center garden that was blooming most voraciously in the summer drought. Gloria could see down into it from her vantage point on a hill that overlooked Green Valley, and the garden’s reds, yellows, pinks, whites, oranges, and purples seemed to be frothing out over the tops of the stone walls in certain places and spilling effulgently over the sides like a sloshing, heady beer. Once, on a neighborly trip to see if the Pennyworts could make use of her old dehumidifier before she threw it out, Gloria had asked why no one was allowed in the walled garden at the heart of the maze—no one except for
Olivia Pennywort, who apparently made her ingress and egress as she pleased. But the answer Gloria got was so noncommittal and vague that within an hour of hearing it she could no longer even recall what it was.

Now, it annoyed her that the Pennyworts were not only watering their gardens illegally, but they seemed to be squandering community resources on a garden that nobody from the public was even allowed to see.

“Maybe there’s a loophole,” Richard Zeiger said from his armchair, his remaining hairs shivering in the blow of the air conditioner. “Maybe they’re allowed to water because they’re a commercial enterprise.”

“They’re not a commercial enterprise,” Gloria said. “Or at least, they’re not
supposed
to be. They don’t charge anything for people to get in.”

She didn’t need to raise her binoculars to see that two women, clasping hands and wearing gauzy, matching skirts, had stopped by the Pennywort farm to tour the gardens and divert themselves a little from the doldrums of a rainless summer, as people were known to do.

Her husband was quiet.

He looked at her, his formidable eyebrows raised.

“If they were watering their peas and carrots or something, I wouldn’t care. But the fact that
they
get to water their enormous maze of a garden just to keep it pretty, while
my
two hanging baskets of phlox have just about turned into ashes—it just isn’t fair.”

Her husband was quiet still.

She held the phone up listening to the dial tone with exasperation. She and Richard had retired up to Green Valley three winters ago. The landscape had been the very picture of peace: deer tracks in snow, bare trees and pale sky, just a sliver of smoke coming from the chimney of some distant, hidden house. They’d had no idea what summertime in the valley would be: Cars lined up and down the road as people stopped to buy vegetables or walk the “magic” maze, homeless people sleeping in a falling-down barn, immigrants from obscure Central American countries milling about in hopes of work, the noise of tractors and yelling men, the stink of manure hanging like a putrid-sweet cloud on muggy days, the horrid flies that descended on the valley like a biblical plague and just as suddenly were gone—there was no peace and quiet whatsoever from thaw to frost. Gloria had come to Green Valley seeking an Eden—her reward for many long years of sitting in a window-less city cubicle. Instead, she had found a dry, noisy, dusty, backwoods, stinky, fly-infested hell. She couldn’t fight against the weather or flies, but there were things to be done about bad neighbors.

Her knuckles turned white from her grip on the phone.

“Okay, okay,” Richard said from his armchair. “You don’t have to convince me. If you’re going to call the police, call the police. I don’t want anything to do with it.”

At the police station, the officer who heard the phone ring looked at the caller ID and rolled his eyes. Thanks to Gloria Zeiger, they’d already sent guys out to Green Valley twice this month, and it was only mid-July. The first time, they’d sent a car because Gloria had reported “strange purple smoke” coming from the property, but it was gone when they arrived. The second
time, Gloria had ratted out her neighbors because one of the various squatters who lived in the Pennyworts’ old barn was doing her calisthenics routine. Topless. Again.